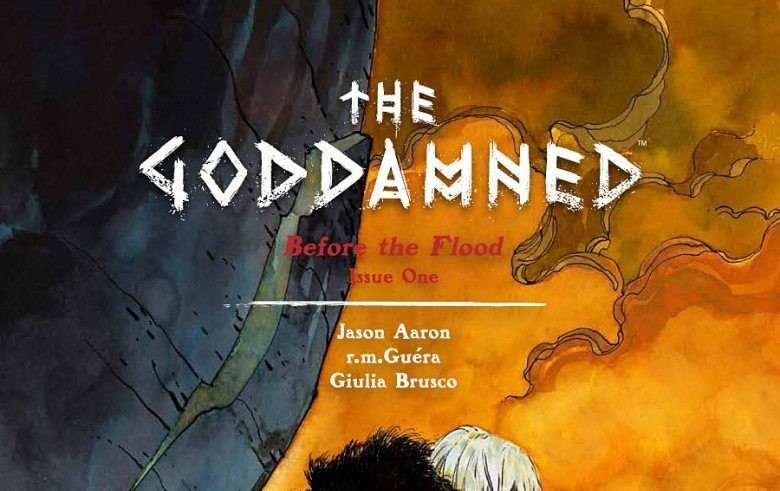 Set 1600 years after Adam and Eve leave Eden, THE GODDAMNED #1 shows what the fall of Man has done to humanity. If this book is anything to go by, Man fell quite far…

THE GODDAMNED by Jason Aaron, r.m. Guéra and Giulia Brusco

The world has gone to Hell. Literally. Man is nothing but a two legged animal, a brutal plague on a decaying world. God has let Man turn paradise into brown dead earth, full of blood and monsters. Why would anyone want to flood the earth? After reading this, you might just agree with God…

After being awakened by a child urninating on him in a derelict pond, Cain (of brother killing fame) learns that a local gang, the Bone Boys, murdered him and stole his belongings. But, if you know your Bible just a little, it takes more than a throat slitting to kill Cain, and he resolves to take back what is his.

The introduction to the world of THE GODDAMNED is a simple one. Jason Aaron shows us it all from the moment Cain wakes up, to when he slaughters a gang of violent killers. In his simple walk from the pond, to the final axe blow, you know enough to realise this is a bleak world. The dialogue is full of hate and anger, and the human interactions are full of violence and disregard. Humanity has no humanity.

If Aarons writing wasn’t enough, r.m. Guéras art, along with Brusco’s colors leaves you in no doubt. The opening splash page sums it all up. A desolate cesspool of dead animals and people in different stages of decay, this world is full of dark dirty browns with the more than occasional splash of blood. The world looks abandoned, and survival is at a cutthroat pace. Even the character designs fill in a lot. The small boy that befriends Cain is potty mouthed and disabled, but no one cares. The Bone Boys are derelict apes, covered in body hair and scars. The only one who stands out is Cain who is for the most part naked but almost the opposite of everyone around him. Scar free, he almost looks like he could be the peak of human perfection, if he wasn’t so cynical and bitter.

READ: Aaron tackles Vader in our preview of VADER DOWN!

It wouldn’t be an Aaron book without some gut punching violence, and THE GODDAMNED #1 doesn’t disappoint. A fight breaks out between Cain and the Bone Boys, and it is brutal. It’s a well-choreographed piece of action that, despite the blood letting, has its moments of dark humor. It is relentless violence, and almost, but not quite, outstays its welcome. But I think that its intentional. Outside of speaking, violence is the second (or even the first) language in this book. There is no talking things out here. It is fists, biting, and goring. 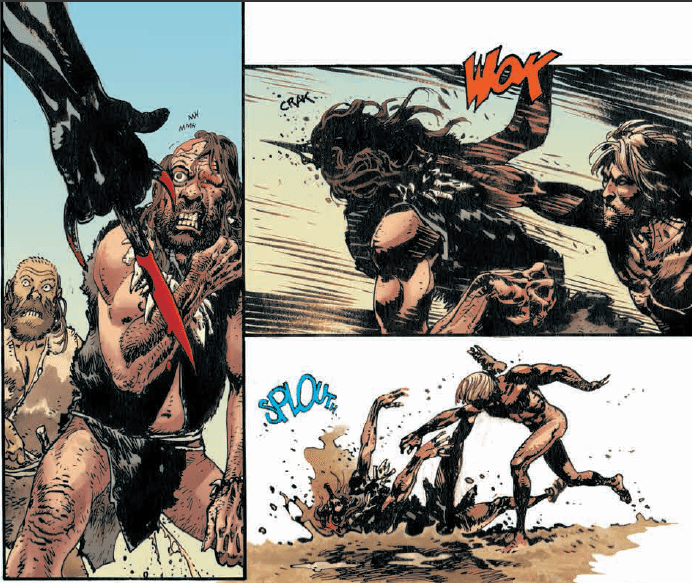 THE GODDAMNED #1 is a compelling read. It shows humanity at its absolute worst, it doesn’t sugar coat anything, and hope has long abandoned this dirty rock spinning through space. But it grabs you from that first moment, and your eyes can’t help but watch a fully realised world unfold before you. It’s what Jason Aaron does best, sit you down, slap you across the face and make you pay attention, all the while telling you a story you need to know.