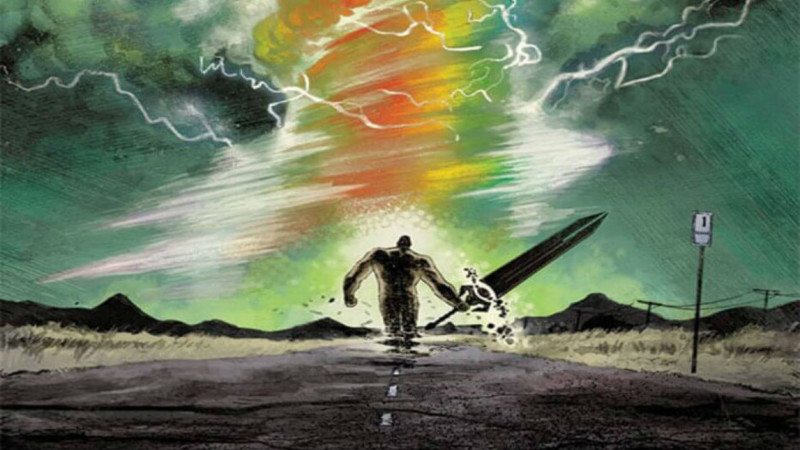 What would you do if a huge demon attempted to attack your family during a disastrous storm? Writer Donny Cates and artist Geoff Shaw introduce us to this concept in the hectic world of GOD COUNTRY #1.

The story centers around the Quinlan family, who live in their rustic home in West Texas, many years in the past. In this home, we see things go upside down as the family struggles with not only the crazy stormy weather, but also with the grandfather Emmett, who may be suffering from Alzheimer’s. Some of the heavier moments include a very angry marital dispute and aggressive weather destroying a house. This comic gets tenser and tenser as we figure out what is going on with Emmett and why this weather has gotten so vicious. 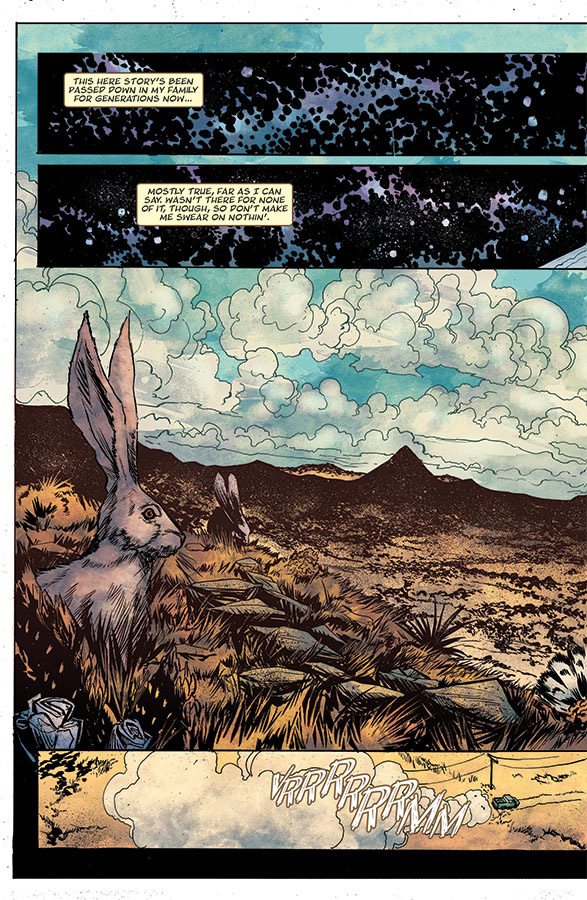 This issue starts with some narration that definitely sets a tone for readers. In it, we learn that this is a tale passed down from generation to generation due to its importance. From one page, we are able to tell that this story is something that will be bigger in scale compared to anything else on your local comic store shelf. This is because we get a zooming set of panels from space and a quote by Cormac McCarthy that talks about god and his almighty wrath.

READ: Not familiar with Image Comics? Here are a few of our reasons why you should check them out!

Cates gives us a fast paced and engaging story that has an amazing climax. He writes tension so perfectly that one can’t predict what will actually happen in the final pages of the issue. We even get some super-powered fighting that is built off the reader’s anticipation. This gives the reader a good look at what type of action to expect from future issues. 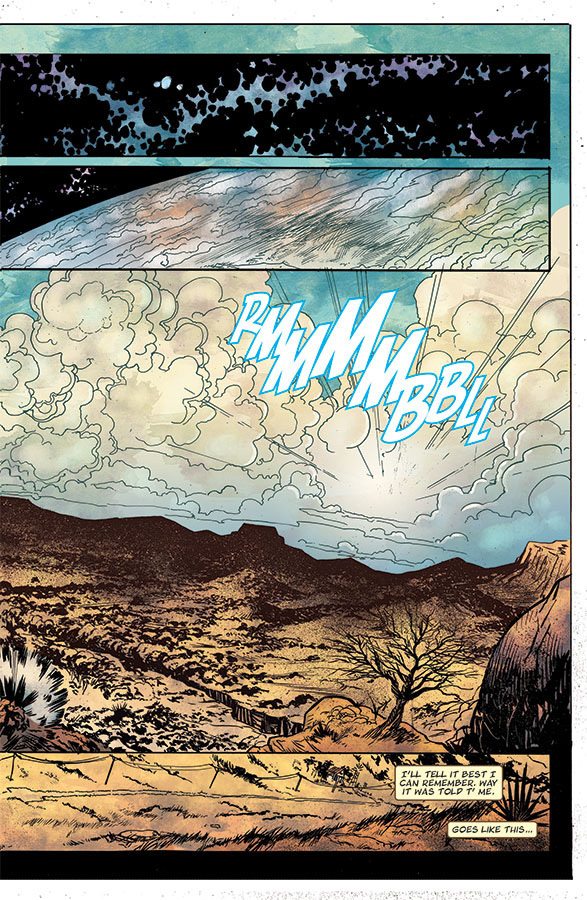 Cates doesn’t give us every answer that we’re looking for. We never learn why Emmett is ailing or why this story has been passed down for centuries. I can see that Cates has been masterfully building the background that will soon put the important facts together. His writing handles plot build up beautifully. For example, he sets up a big fight at the end by having the narrator chime in and explain how powerful one of the main characters is. He doesn’t hint at it earlier in the issue, nor does Shaw show us. Instead, he lets the story lead to this fight and then uses the narrator to describe what we are seeing.

One thing I did find to be important in this issue was the presence of family. Though this is only the first issue, I can tell that the Quinlan family’s relationship will be a key factor in the overall plot. This can be seen through Roy’s struggle to explain to his wife why it’s important for him to care for Emmett. Of course, his father is important to him, but we have yet to understand why Roy feels he is the only one who can really care for him. Family is important for many obvious reasons, but how does that change when special abilities are involved? It’s clear to see that family will be a driving force of conflict in this comic.

When thinking of stories from the Old Testament, we imagine the destructive power of nature and weather. The artwork of GOD COUNTRY #1 delivers this destruction by meshes well with Cates’ writing. Shaw’s style of this narrative is very bleak and gritty, much like we would want to see from a story capable of illustrating raw power. The large gray clouds and strong, forceful winds are well drawn and help in building the grand tone of the story. This gives it the legendary feel deserving of a plot that is delving into something largely religious in theme. 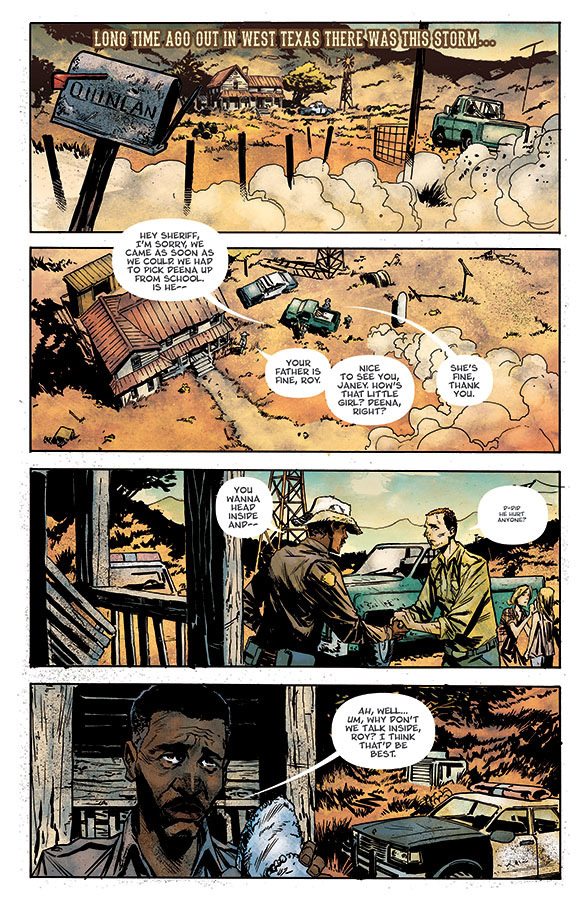 In this issue we can see the detail in the characters such as the fear in Roy’s face or the intricate chocolate marks on his daughter’s face. He put plenty of effort in showing the emotion of these characters, which really paid off in showing their current struggle. Where Shaw’s penciling really shines though is in his design of landscapes. The mountain ranges of Texas are vast and beautiful, even when there is a destructive storm present. Now throw some finely drawn hares into the mix, and you have a beautiful set of panels to push the story along.

Artists Geoff Shaw and Dave Stewart give us a cover that is simply badass. A violent storm being faced by a huge, muscular man with a sword is just extremely awesome. It’s a great way to wrap the epic present that is GOD COUNTRY #1. 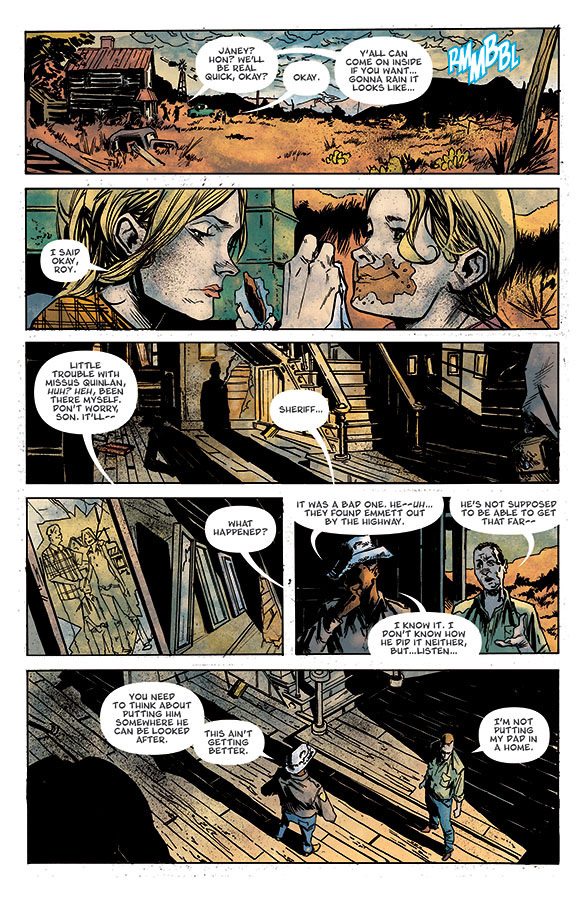 There’s a definite criticism I can make about this comic: I felt as though not much of the overall plot has been laid out as I’d expect from a pilot issue. I would’ve appreciated more background on the characters and why we are following them. It was as though I had been dropped into their world and was expected to understand what was happening even though I have never been there before.

READ: Interested in religion as a theme in comics? Check out our analysis of faith and organized religion in PREACHER!

Criticism aside, I look forward to learning more about the mythos of this comic, because it has already started in a grandiose way. Image may have another Goliath-level series on its hands because GOD COUNTRY is off to a phenomenal start.

GOD COUNTRY #1 released on January 11th! Are you excited to jump into this new series? Leave your comments below!