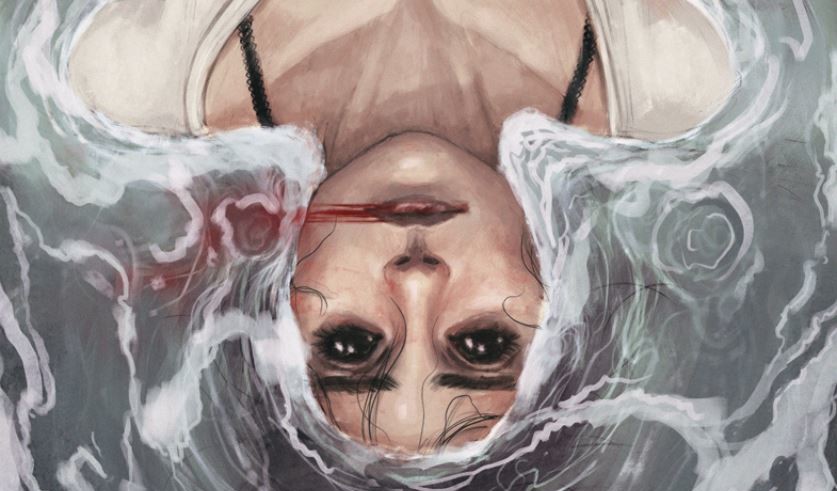 GLITTERBOMB, VOL. 1: RED CARPET, created by Jim Zub and Djibril Morissette-Phan, follows the struggle of Farrah Durante, a middle-aged actress rejected at every turn for not being young enough. That’s where we first meet her: in an awkward interview-turned-confrontation when her agent asks her, “I need an angle. Have you got anything to sell?” 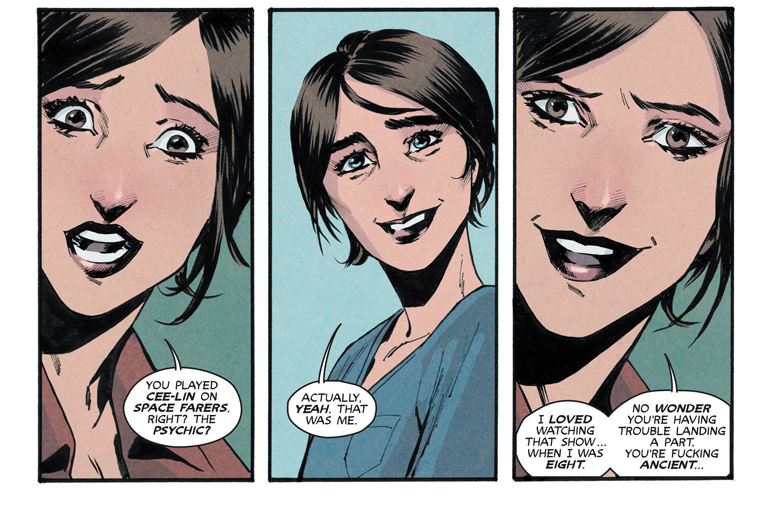 In an instant, he’s speared through his neck with her stretched barbed tongue — because Durante harbors a monster in her, one borne of the bitterness and rage and emptiness of her experience with the Hollywood industry.

READ: Getting into GLITTERBOMB? Check out this interview with co-creators Jim Zub and Djibril Morissette-Phan!

The story deals with a tangle of interconnected issues that unravel our protagonist to her core. There are the pressures of being a single mother, as Durante struggles to take care of her four-year-old kid Marty, leaving him with babysitter Kaydon for endless stretches of time. Kaydon herself is young, brimful of aspirations to be an actor, and represents the youth who look from the outside in without seeing any of the industry’s hidden horrors.

There’s so much centered around youth, as that’s the main crisis Durante faces. Durante’s career was highlighted by a spot as a psychic in “Space Farers,” the Star Trek equivalent in this ‘verse. She sees how naïve and easily manipulated she was in her youth, and now that she’s lost that in age, she loses her value to them and becomes more a threat to her coworkers. Nobody wants to deal with a woman who knows her own mind.

READ:  MS. MARVEL breaks all kinds of stereotypes, including ones about millennials!

All the same, the young ones are snapping up the opportunities, and so Farrah possibly deals with youth envy. She loses a part she auditioned for to Brooke Vixy — a Millennial aspiring actress bearing a close resemblance to Farrah in her youth. Brooke is filled with confidence supported by vague, naïve motivational things like envisioning her success when in this industry her changes are more affected by her age, and Farrah sees it a mile away. It’s possible that both characters represent a generational difference between attitudes towards mental health, with Brooke being more comfortable seeing a health care professional and Farrah regarding therapy as more of a con scheme than treatment. But it could also just as easily be satire aimed at the airy, meaningless expressions and attitudes presented in today’s almost folkloric pop-culture psychology. 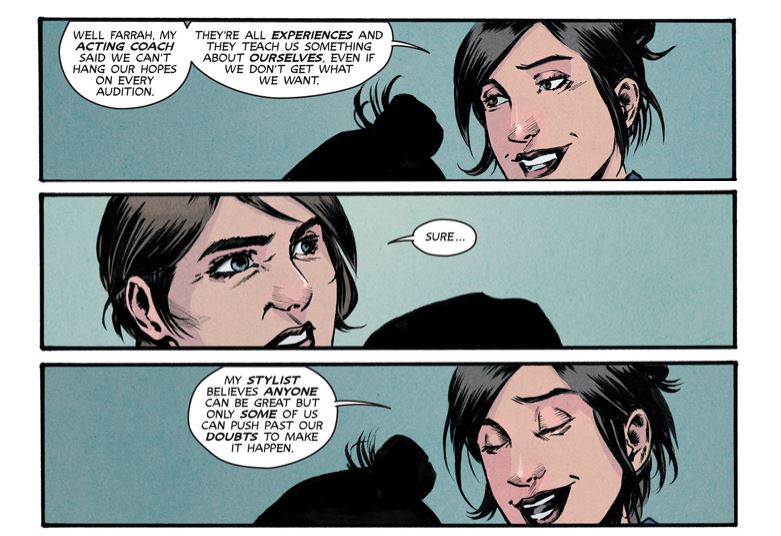 We become fascinated by the monster inside of Farrah, as she hits bump after bump in pursuit of reviving her acting career. It’s triggered by those rejection moments, and the more we see of the monster, the more precise and calculating it appears to be in its attacks. The dynamic between the “creature,” as it’s dubbed in VOL. 1, and the unsuspecting people around it begins to resemble predator-prey when it approaches its later targets, symbols of destruction and ruin Farrah perceives in her life. Because really, her bitterness is more directed at the people she deals with in the industry than the next generation unwittingly falling prey to the same toxic culture she lost herself in. 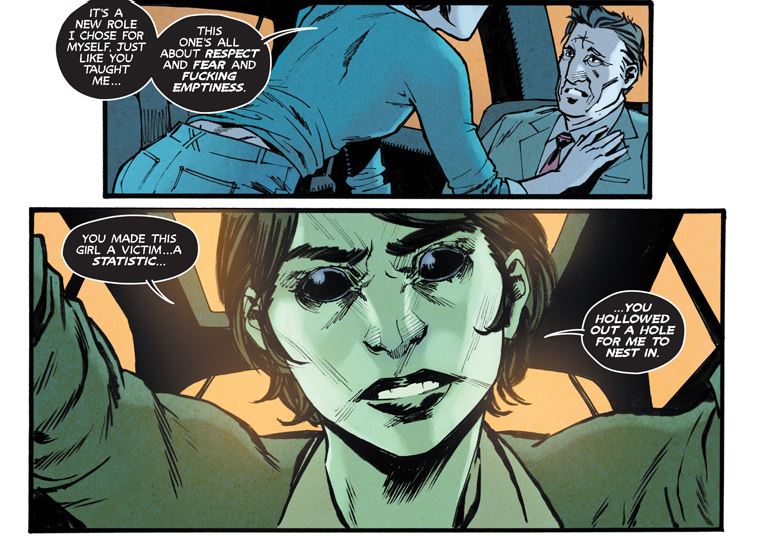 The theme of rejection in GLITTERBOMB: RED CARPET is incredibly powerful in drawing in readers. You don’t have to be involved in the film industry to understand what any of this feels like. You don’t even have to be hitting what’s generally considered a middle age range. When you’re younger, opportunities seem limitless, and the older you get, the more open your eyes become to the boundaries. Possibly a little more disillusioned. Jaded, even. There’s a phase where you realize that not all the opportunities may be open to you the way they are to others because there’s a greater focus on aesthetic appearance than the quality of work. Discrimination in the workplace is still a thing. There’s a fear, if you’re likely to be subject to it, that sometimes people secretly avoid hiring you because of your skin color, your second language or your orientation, and that in most cases you’ll never be able to prove it.

(Of course, a more optimistic, idealistic viewpoint might say that it’s possible to create your opportunities, that you can define your success and that the path to said success may be more unconventional than previously expected. But this is about Farrah’s story.)

READ: Explore the many faces and representations of America at this year’s Oscars!

In other environments, the way you look will predetermine where you fit in. This is a call to hold the industry accountable, and it’s not alone; it’s a voice among people who also see the kinds of strides Hollywood needs to make to become gender, age and culturally inclusive in American art. Hollywood is notorious for typecasting based on gender and ethnicity, as well as preferring youth over age, and still has tons of room for establishing itself as being culturally inclusive — it has miles to go before it can escape the whitewashing reputation that precedes it. Only recently has there been more representation in award ceremonies, more recently the Grammys and the Oscars — possibly out of Hollywood’s standing in solidarity with immigrants against Trump’s travel ban.

But Hollywood, when it’s all over, will you still be with us? Or will we go back to fighting these battles alone? 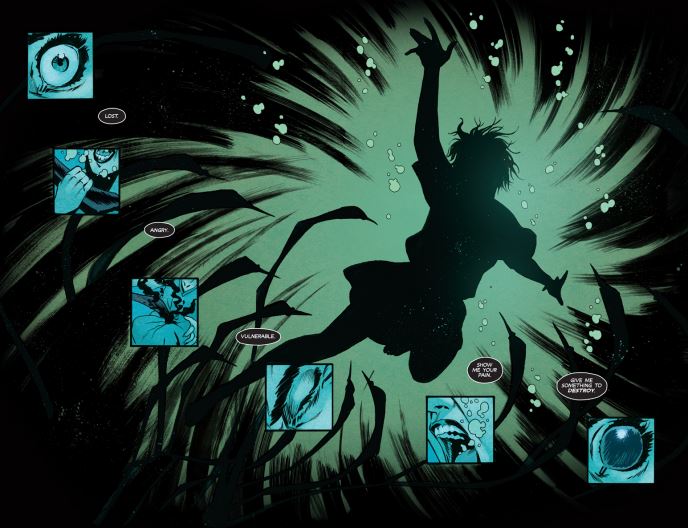 So, I think it’s possible to identify with this art — the creature being symbolic of the repressed rage from a long-occurring string of rejections, how that rage can lash out at you if you don’t see it for what it is and take steps to maintain your health and well-being. To me it echoes elements of The Metamorphosis and Dr. Jekyll and Mr. Hyde; it’s that trope where the things that fuel your anger transform you into a monster.

READ: Image celebrates its 25th anniversary this year! Check out some of our favorites.

Note that there’s additional supplemental content in trade: the first four issues of GLITTERBOMB were each followed by essays written by former production coordinator Holly Hughes about the relentlessness of the filming industry, and thankfully they are collected and kept at the end of GLITTERBOMB VOL. ONE. These essays, just short enough to get your attention without losing you after, will grip you with the Kafka-esque horror given to us by Farrah and the creature, except that it’s all real. Hughes shares her experiences being manipulated and abused within the industry, and how she managed to escape the voracious appetite for fame and recognition among her peers: “Despite being broken, I refused to succumb. I picked up the pieces of my life, drew boundaries and slowly healed. And now I watch from the sidelines as Hollywood has its way with those I left behind.” 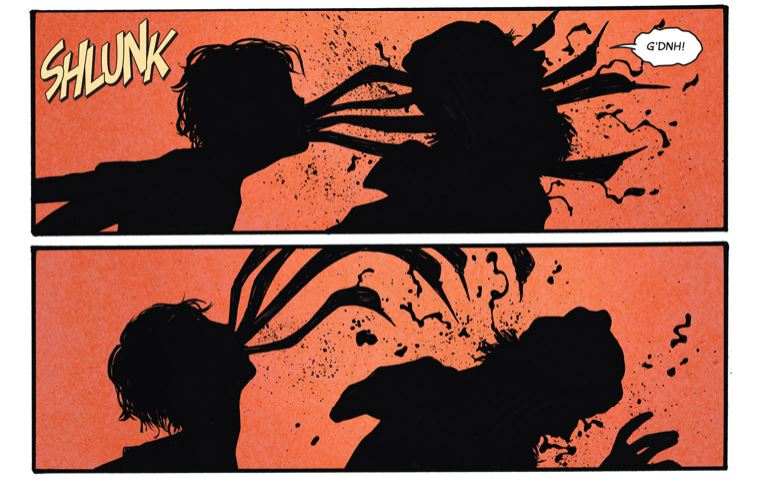 Also present in the trade that won’t be found in the single issues are studies/concept art for the main characters. These lend a little extra insight into the role that the creators intended for the characters in this story, which is important in the way of determining and understanding the themes in the story. Morissette-Phan has this lovely way with emphasizing personality in the body language and gesturing of the characters themselves, and it adds a subtle layer of depth to the plot that makes all the difference.

I knew the moment I caught the first few panels in the Image Previews that this was going to be an important comic. Not only did it seem to speak to something larger than itself, but what lured me in was Farrah’s eyes as the creature: that inky, glittering darkness, a void seething with rage and thirsting for revenge. I wanted to learn more about this character’s struggle, about who she was, and see if her story could get me to feel her pain and anger. Now that I’ve caught the first four issues in trade, I see why. And I just have this terrible itch to get my hands on the next issue. This skin-crawling…