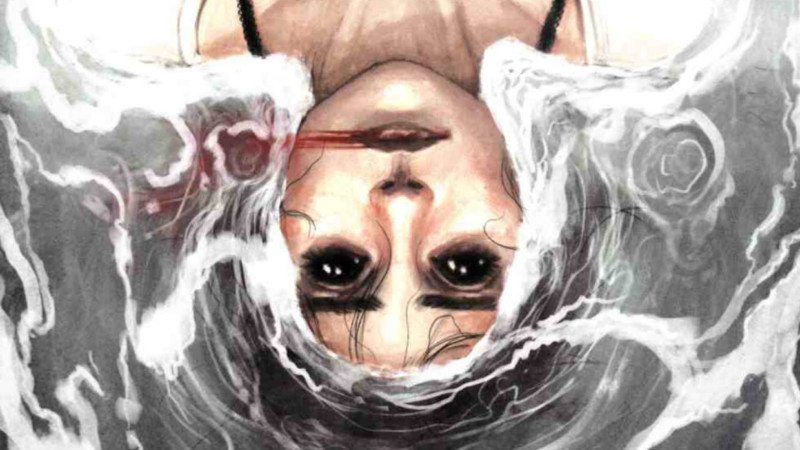 “Glitter bombing” is a neologism created to describe when an activist throws an excessive amount of glitter at a public figure to express disapproval with them. The targets of glitter bombings are usually conservative politicians with anti-LGBTQ policies, and despite its aggressive moniker, this unconventional means of protest is virtually harmless. Counterculture has yet to devise a more fabulous way of saying “fuck you” to someone who uses their power to perpetuate systematic oppression through gendered expectations.

It’s safe to say that when writer Jim Dub titled his comic GLITTERBOMB, he was familiar with the form of protest that the title was referencing. The comic features a female protagonist who begins acting out violently towards those that sleight her. GLITTERBOMB’s excessive use of violence is similar to an actual glitter bomb. It is an over-the-top response to the sexist oppression the protagonist faces. Fictional violence is shocking and sometimes cathartic but it is ultimately harmless, like getting showered with glitter.

GLITTERBOMB follows Farrah Durante, a struggling actress living in Los Angeles. Years after starring in a sci-fi television show, Farrah is fighting the perception that she is washed-up and too old to be successful in the entertainment industry. After a failed audition, Farrah becomes the host to a mysterious entity from the Pacific Ocean. So far, GLITTERBOMB’s plot has been centered around Farrah coming to terms with the uncontrollable violent monster now living inside of her. As she becomes a host to an alien entity, she also becomes a woman who violently rejects the gendered expectations of the industry she works in. 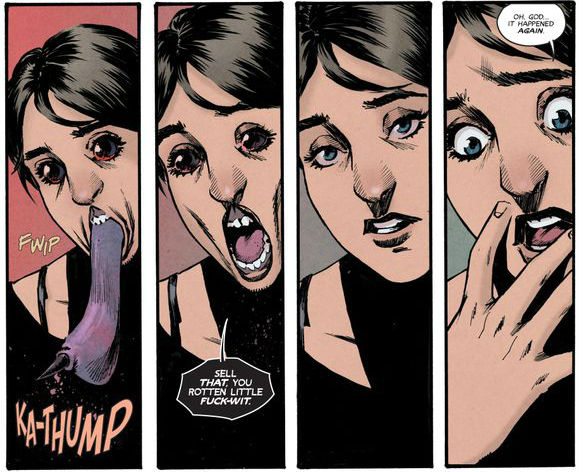 LISTEN: Need more kick-ass females in your life? Listen to a podcast about BITCH PLANET!

It honestly doesn’t take much insight to realize that GLITTERBOMB is a critique of the sexism that women face in the entertainment industry. In the climax of issue #1, Farrah gruesomely murders her agent after he tells her that she is not young or pretty enough to be successful and that her career is essentially over. Agents, casting directors, and tabloid magazines are constantly picking apart these women’s appearances, from their weight to their age. Their bodies are an object of constant criticism. 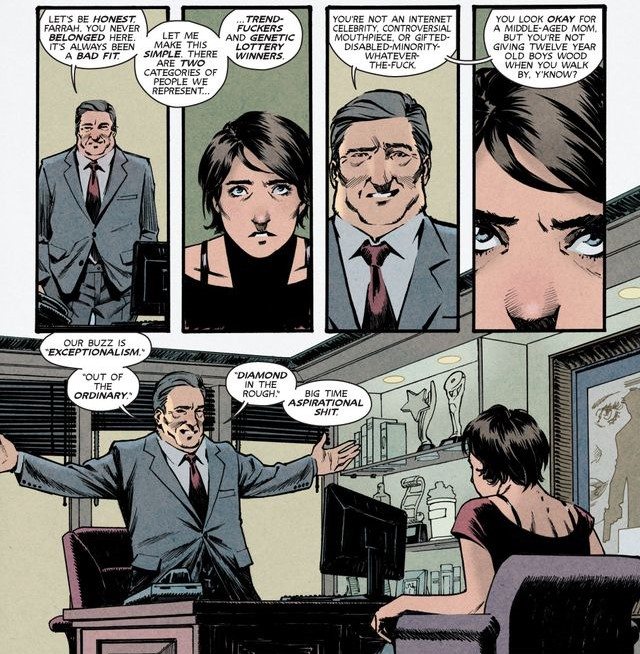 Unfortunately, the constant policing of women’s bodies is not confined to Hollywood. The pressure that Farrah faces to be younger and prettier in GLITTERBOMB is similar to the pressure that all women in Westernized cultures face. The society surrounding Farrah expects her to conform to the same unachievable ideal as the rest of us.

In issue #2, the comics’ creators purposefully draw a parallel between the pressure this fictional character faces and the pressure real women face. As Farrah mindlessly flips through the channels on her television, we see a barrage of images including a fitness infomercial, a car salesman, a preacher, a child pageant, and a reality show. This scene establishes that Farrah lives in the same universe as GLITTERBOMB’s readers. We are all part of a society that profits from and feeds off of our dissatisfaction.

Constant exposure to media from the time we are young conditions women to conform to gendered expectations. The representation of child pageants in this scene is an extreme but apt example of this conditioning. Girls who participate in pageants are in competition with other females to be the most attractive, in both their appearance and their mannerisms. Pageants have a hand in perpetuating our culture’s standard of beauty, a standard that society holds us all to. In our never-ending journey to achieve this perfection, corporations can sell us countless beauty products and weight-loss programs. 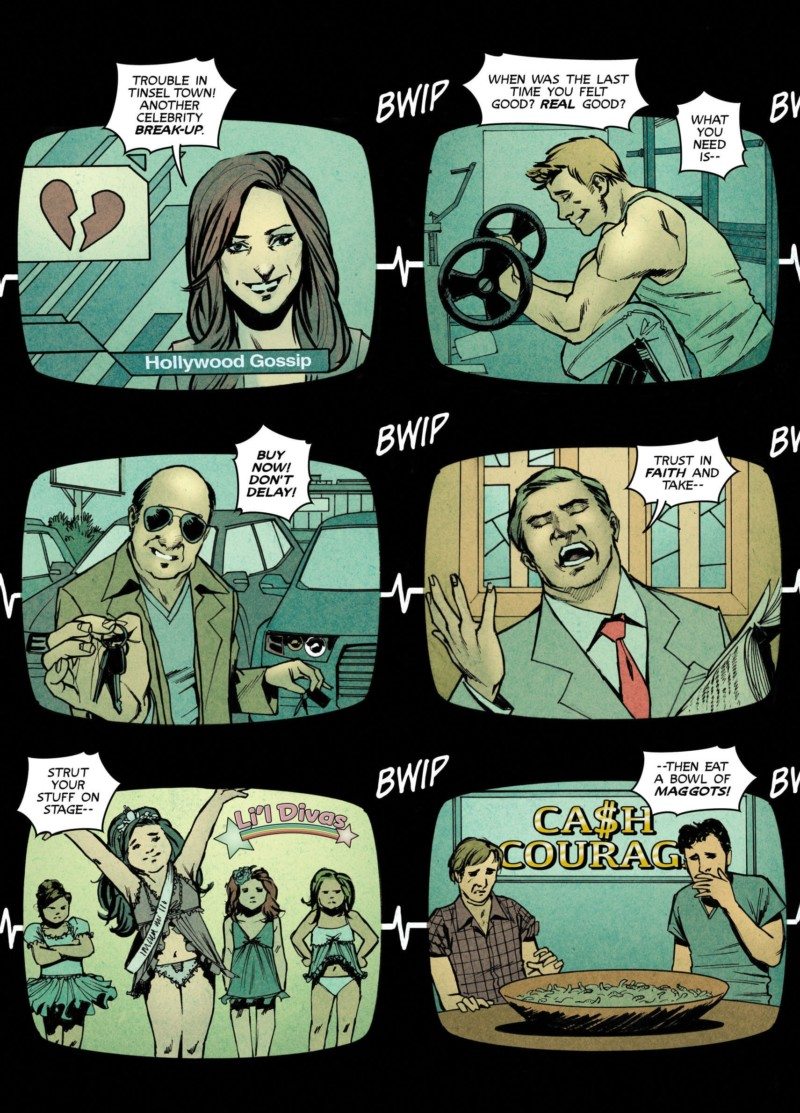 READ: Love horror comics? Click for an article on EC Comics and the art of horror!

Society does not just expect women to conform to a particular concept of beauty. Women are expected to behave in a certain manner as well. “Ladylike” behavior is typically gentle, polite, and passive. GLITTERBOMB also addresses this behavioral expectation. In issue #1, Farrah has an encounter with a younger actress, whose notices she has zero patience for. She meets the young actress’ optimism and friendliness with cold cynicism. In doing so, Farrah violates the gendered expectations of ideal female behavior. The young actress, Brooke, is apparently so shocked by Farrah’s behavior that she’s shown talking to her therapist about this encounter in issue #2.

Furthermore, Brooke’s friendliness is not genuine. As readers, we can tell this by the way she quickly lashes out at Farrah once Farrah refuses to match her level of enthusiasm. Brooke is not a kind person; she is simply playing the role of a young hopeful actress. The dynamic between Farrah and Brooke is notable because it demonstrates the resentment older women can feel towards younger women, and vice versa, in a society where women are in competition with one another for male approval. Farrah resents Brooke because Brooke has the privilege of conforming to the beauty standards set by the entertainment industry. On the other hand, Brooke resents Farrah because she is afraid that one day she might become her. Brooke knows that when she reaches a certain age, the male-dominated entertainment industry will likely toss her away, too.

Fully understanding the nuances of GLITTERBOMB requires a knowledge of traditional gender roles and the way they shape women’s behavior. The ideal woman is not only polite but also passive. Farrah’s response to Brooke and the violence she commits in the comic are the opposite of these ideals. Farrah’s interaction with Brooke shows that she’s already fed up with the bullshit she’s had to endure as an actress. However, she only lets out these repressed feelings in a violent matter once the alien is inside of her. The alien occupying her represents a bubbling over of female rage. She has compartmentalized her resentment in a way that makes it external from her own identity. Sometimes this anger takes over and she acts in ways that are not only inappropriate, but murderous.

The violence committed by Farrah is a direct rejection of the gendered expectations of “ladylike” behavior. She does not sit quietly while her agent tears her down or while a homeless man steals her bag. She reacts to these external forces and by doing so, she flips the male-female power dynamic on its head. However, it is not particularly progressive for popular media to portray female characters as violent. Although their actions might defy gender roles, their appearances still conform to beauty standards. Media tends to depict violent women as sex objects, despite their transgressive behavior. Farrah’s violence not only violates the passivity that society expects of her, but does so in a way that is particularly ugly in the context of violent female characters. Her outbursts cater only to lovers of body horror, not the male gaze. 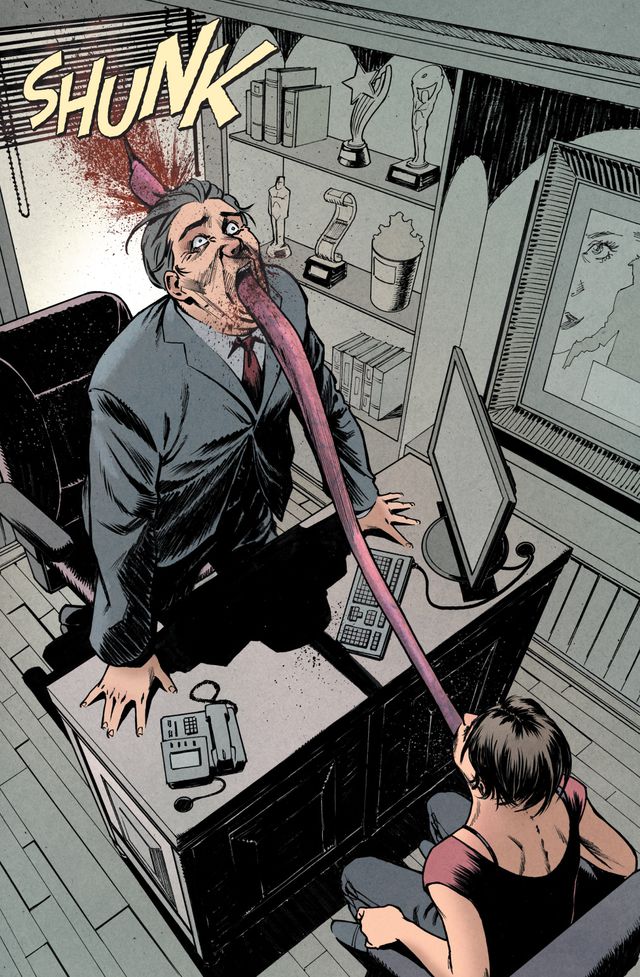 READ: Wondering how popular media can affect self-esteem? Here’s an article about body positivity in film!

The creators do not intend for the audience to interpret Farrah’s violent reaction to sexism literally. There is a reason that Farrah only becomes violent after she’s a host to a parasite. Her actions are understandable, but certainly not justifiable. GLITTERBOMB is by no means a call to arms for women to attack people who contribute to their oppression. The creators intend this violence only as catharsis. Like a glitter bombing, the comic is a shock to the system, but is not damaging beyond a rhetorical sense. GLITTERBOMB offers a moment of release for all women who live with the pressures to be passive, pretty, and perfect.

It’s too early to say for sure exactly what plans GLITTERBOMB’s creators have for Farrah. However, I hope that her character is ultimately able to reclaim physical agency from the alien inhabiting her, while continuing to defy the gendered expectations that society has thrust upon her.