Many of us remember the anxieties that came with our first day of college. Of course, a lot of us are dealing with that right now. Will people like me? Can I deal with my roommate? Not to mention, is this where I find love?

Reading GIANT DAYS from Boom!Studios reminds us we are not alone in these thoughts. The series follows the story of Susan, Esther and Daisy, three University students dealing with everything from relationships to School Union scandals. First there is Esther, the fun loving drama magnet. Next is Susan, the cynical voice of reason, and Daisy, the homeschool kid with a heart of gold. Together these three have formed a wonderful relationship. Their equally unique personas cause each other to grow as people throughout each volume.

The trio have finished their first year of university life in issue #18. Before the new year begins, they will take a journey to a world that never should have been.

What if? One of the staples of the comic book multiverse finds its way into the lives of these University students. The powers align as the all knowing Day-Zee takes us to a twisted GIANT DAYS.  A universe where Susan, Esther and Daisy didn’t become friends! 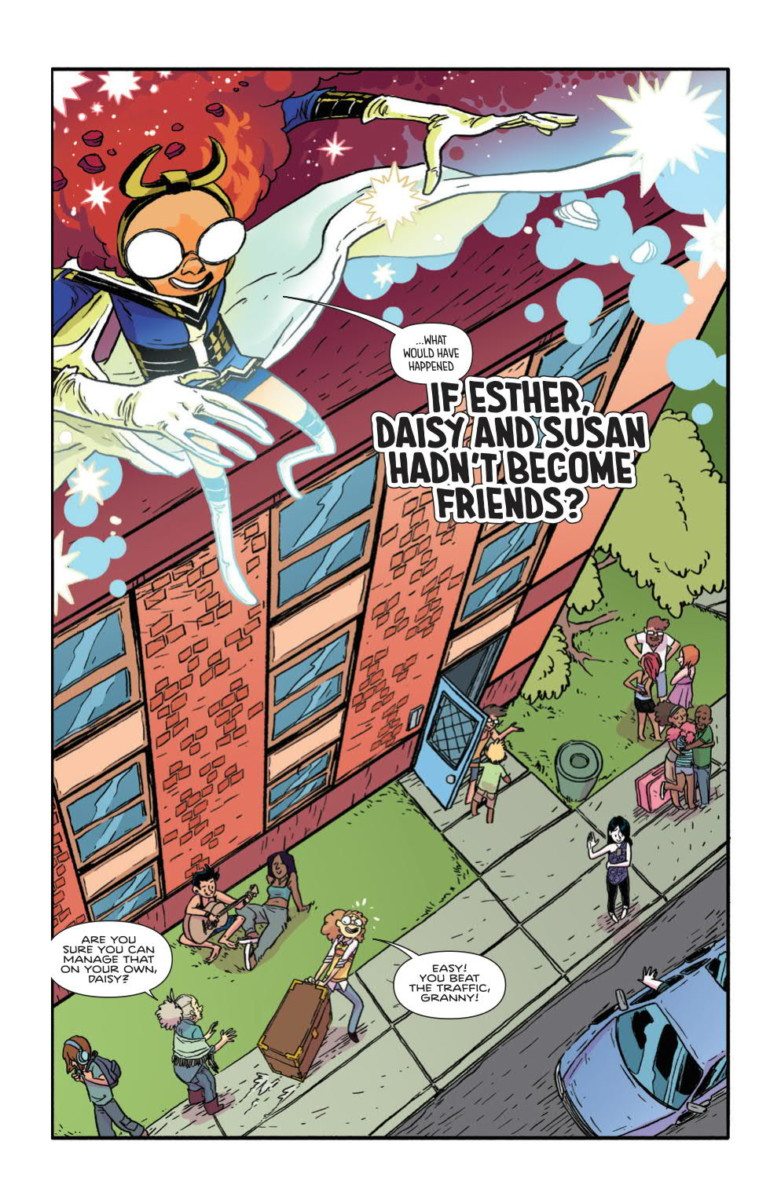 For their origin story, read GIANT DAYS: ORIENTATION EDITION, here we are given a corrupt version of their first day of university life, where the invisible hand of fate pushes them onto separate paths. Esther is drafted into the resident mean girls group, who make an enemy out of Susan rather quickly. 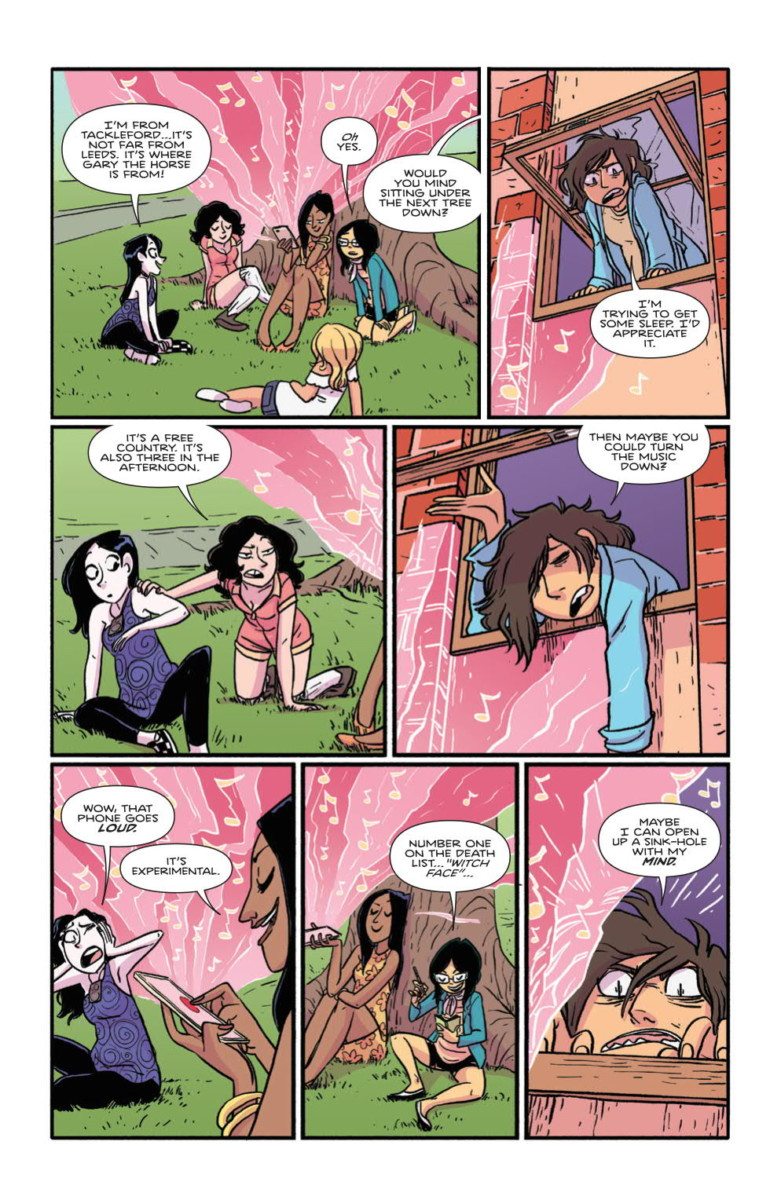 Overall I really enjoyed this issue, my only grievance would be the downward spiral of Esther. In the first place, Esther’s new friends are are terrible. Not to mention one is proud of stealing from the homeless! Esther, like all  great characters, has her flaws. She parties nonstop from day one just to please her friends. It just feels like after months of this abuse to her body & soul she would find the courage to say no to them. Of course I’m not saying this isn’t what would happen in this timeline.

These choices are up to the brilliant John Allison (SCARY GO ROUND, BAD MACHINERY). Every issue of this series I pick up, I will not put down until I finish. John’s strength is cultivating relatable three-dimensional characters. From the first volume on, you too will become attached to these three. You will undoubtedly see yourself within this wide range of complex personalities.

READ:Want more tales of Friendship from Boom!Studios? Here’s a review on LUMBERJANES #25 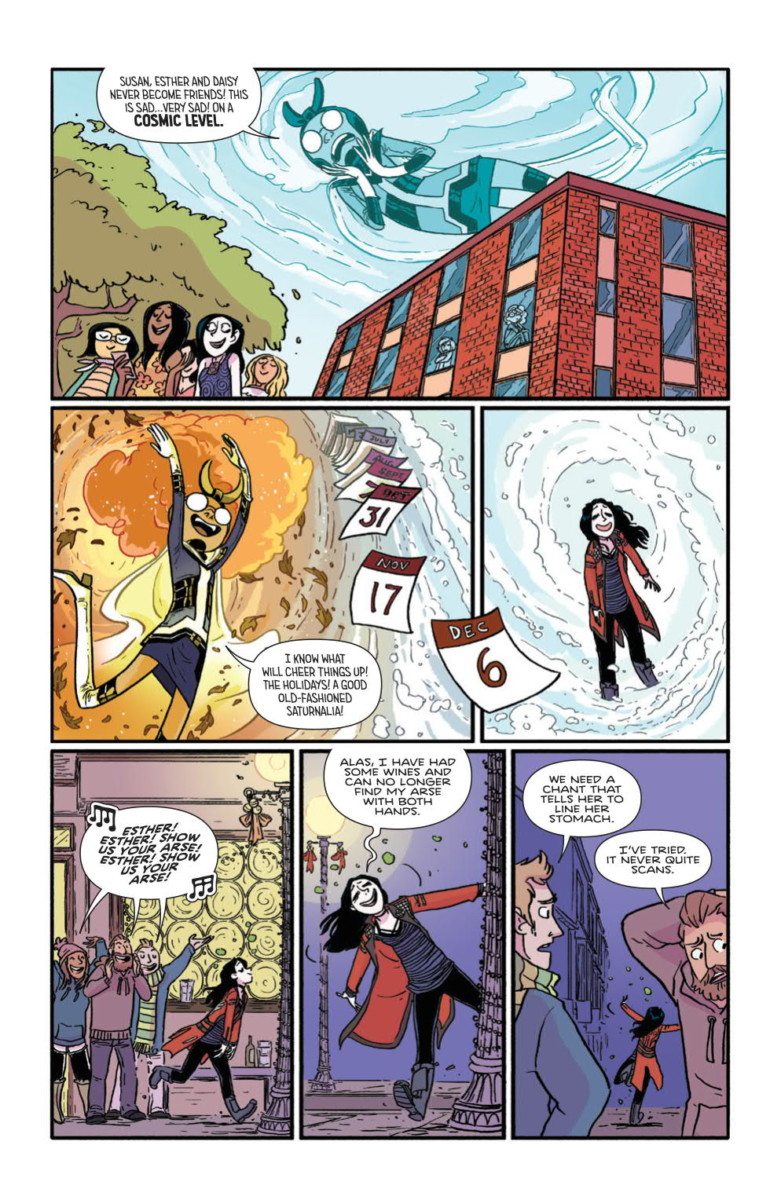 When you read about the character’s ups and downs in this series, you can’t help but root for them. That is what I was doing for Esther in the first half of the story, for her to get over this pitfall without Daisy and Susan. In light of this new reality, Daisy has remained a wallflower and becomes the resident shut in, blasting Enya to escape her sadness. Which drives the unholy couple next door, Susan and Ed, crazy. Ed, who originally had a crush on Esther, also has little to no confidence with women. So it does make sense that he was attracted to Susan’s strong personality.

By the end, the three bond over their misfortunes, and some satisfying vengeance on Esther’s ex-friends with the help of the University’s resident white knight and Susan’s ex, Graham McGraw.

The moral here is that while life may seem to conspire against you, that doesn’t mean you can’t  push back.

READ: For another article on an awesome group of friends, read our review of PAPER GIRLS VOL.1

Bottom line, this is a wonderful one shot. In addition to a well written story, Original artist Lissa Treiman (GIANT DAYS 1-6) returns for this holiday one shot. Treiman’s unique and free flowing style actually animates the panels to a point where it’s more like watching a TV series. It was a real treat having her back. You cannot have any version of these mates origin without the original team.

The special concludes with a bonus story created by Caanan Grall (MAX OVERACTS) where Esther and her family take in a poor unfortunate soul for the holidays. A short charming tale that wraps up this first in, what I hope, is a long run of one shots from this one-of-a-kind series. Make sure to grab your copy at the campus book store today!