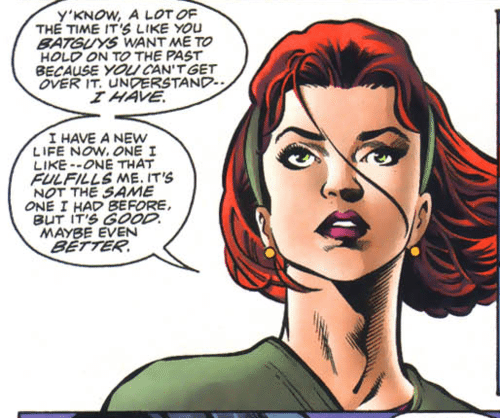 “A little over a year has passed since my old life ended, since I died and was reborn. The shadows remain, but only to give contrast to the light. I am no longer a distaff impersonation of someone else — I’m me, more me than I have ever been. I embrace it, and the light, with a deep, continuing joy.”

Barbara Gordon was the first Batgirl, wearing the cape and cowl from 1967 to 1988. In the original DC Comics canon she was the daughter of Commissioner James Gordon of the Gotham Police Department. In her civilian identity Barbara has a doctorate in library science and is the head of the Gotham Public Library, one of the largest libraries in the  DC Universe. She appeared throughout various Detective Comics publications in the 60’s & 70’s and also made appearances in books like JSTICE LEAGUE OF AMERICA and SUPERMAN. In 1985 the DC Comics event CRISIS ON INFINITE EARTH reset the DC universe. There were not many changes to Barbara, but instead of his daughter she became Jim Gordon’s niece. Barbara was retired from Batgirl in 1988’s BATGIRL SPECIAL #1.

Barbara returned later that year for Alan Moore’s graphic novel BATMAN: THE KILLING JOKE. In the story The Joker shoots Barbara through the spine, paralyzing her, in order to prove to Batman that good people, i.e. Commissioner Gordon, can be driven mad. Though the graphic novel had a serious impact on the character, the story itself had little to do with her. Gail Simone, writer, would go on to reference Barbara’s paralysis on her list of characters who had been harmed, killed, or depowered to further the pain of the title character (“Women in Refrigerators”).

THE BIRTH OF THE ORACLE

Following THE KILLING JOKE, writer and editor Kim Yale discussed her distaste of the story with her husband and the pair decided to bring Barbara back as a disabled character, so that she would remain in the universe. Her first appearance as “Oracle,” a computer-whiz, brilliant contact was in SUICIDE SQUAD #23, when she anonymously offered to help. From her introduction she made appearances in a variety of DC Comics, remaining anonymous. Her identity is revealed in SUICIDE SQUAD 338 and she officially becomes a member in issue #48.

READ: Why are DISABLED HEROES important?

Oracle had featured appearances in many BATMAN comics as his primary information source. BIRDS OF PREY was then created, a primarily female group, that featured Oracle and Black Canary as the leaders. She also made appearances in many other DC Comics as a major information source for the Justice League, the Suicide Squad, the Birds of Prey, etc. When the BATGIRL comic was relaunched in 2009 with Stephanie Brown as the titular character, Barbara had tried to discourage, but eventually came to accept her as Batgirl.

In September 2011, DC relaunched, again, with the NEW 52. In the NEW 52 BATGIRL relaunches with Barbara Gordon taking the lead role. DC Senior VP of Sales, Bob Wayne, explained that with each of their titles reverting to issue No. 1,

Our creative teams have the ability to take a more modern approach—not only with each character, but with how the characters interact with one another and the universe as a whole, and focus on the earlier part of the careers of each of our iconic characters.

In the NEW 52 there has been a lot of focus on Barbara’s trauma and how she’s become a more nuanced character because of it. One of her biggest “enemies” is her trauma.

REACTIONS TO THE PARALYSIS

Barbara saw a lot of criticism when she was paralyzed, one of the biggest critics was Ray Tate, reviewer at Comics Bulletin,

It’s ridiculous to think somebody wakes up thinking how lucky they are to be confined to a wheelchair, and yet the attitude around DC and among the fans is that Oracle is the better character over Batgirl because of her handicap. Rubbish. Batgirl has fought more crime and done more to aid Batman as Batgirl than she has as Oracle. Batgirl has saved Batman’s life on numerous occasions. Oracle has not. Barbara in this incarnation is not a bad character, but she is not better because she no longer hunts the night in cape and cowl.

Of course, DC also received a lot of praise for highlighting a disabled character and showing her help the team in the ways she could.

On the flipside, there has been a lot of criticism of the NEW 52, both from writers of Oracle and the disabled community. Dennis O’Neil, writer for DC Comics said,

We had hordes of people in spandex beating up criminals … We didn’t have anybody like Oracle, who overcame a disability and was just as valuable and just as effective in a way that didn’t involve violence.

And disabled blogger Neil Kapit praised DC for the creation of Oracle,

When Barbara Gordon became Oracle, she went from a character who was of neutral worth to one utterly priceless to the DCU,” Kapit pointed out. “From her chair, Barbara has formed connections with the entire DCU, revolutionized the technological infrastructure of crime-fighting, and helped found the all-female Birds of Prey, a team which has been consistently high-quality and beloved by men and women alike.

MY THOUGHTS ON THE CONTROVERSY

My thoughts as someone who is paraplegic herself shouldn’t be difficult to figure out. I am incredibly frustrated at the decision to, essentially, remove Barbara’s paraplegia and return her to the cowl. First of all, I heavily disagree with the critics who deemed the wheelchair ‘confining’ and a hindrance for Barbara. A wheelchair is the opposite of confinement– it’s freedom. It allows someone who would not normally be able to leave their bed or the hospital the ability to move around and live a life.

I understand wanting to keep with tradition, but the impact of Oracle on the disabled community is more important than tradition. People, like myself, could relate to a superhero– and yes, Oracle was a hero– and see that they didn’t have to change who they were in order to make a difference.  When it comes down to it, that’s one of my biggest problems with comics and disability. Writers give someone a disability, like Barbara’s paraplegia, and then they just take it away, whether it’s a few issues or a decade later.