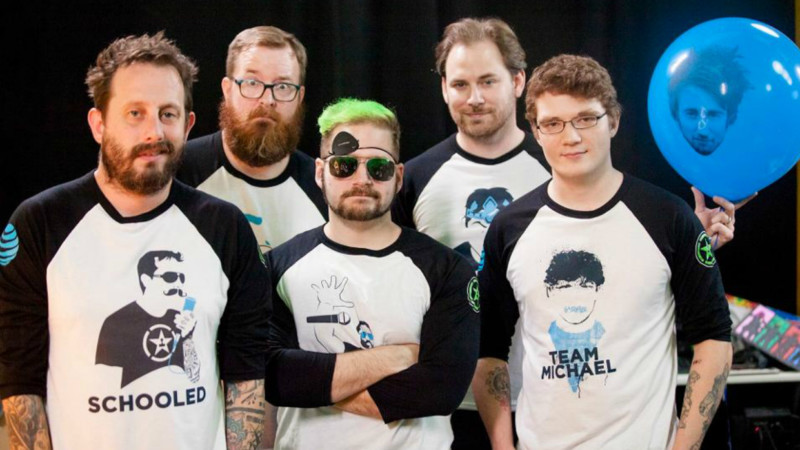 Geoff Ramsey, founder of the production company Rooster Teeth, his daughter Millie, and the Achievement Hunter team just launched Season 2 of their AT&T Hello Lab series SCHOOLED, where adult Achievement Hunters are paired with kid interns to compete against each other in an all out battle for glory and fame. The goal? You don’t have to win, you just don’t want to lose, because the losing team gets punished by the winning team!

ComicsVerse (CV): As the creator of both Rooster Teeth and Achievement Hunter, how has it felt to watch the company grow to what it is today?

Geoff Ramsey (GM): It is confusing. We started Red vs Blue as a kind of side project cartoon to make ourselves laugh. I don’t think anybody expected it to turn into a legitimate career, let alone a company that now has more than 250 employees. Uh, so it’s, uh, [laughs] we’re still scratching our heads trying to figure out just how the hell that happened. Because, it doesn’t make sense on paper.

CV: What inspired you to create SCHOOLED, in particular?

GM: I don’t know if that I can take credit for creating SCHOOLED? I definitely had a part in it. But, honestly, as my daughter has grown older, and I have grown older, I wanted to find a way for us to not only make content together, but to make content she and her friends can enjoy. Because, as I’m sure you can understand, most of Rooster Teeth content in the past — it’s changing — hasn’t been super kid-friendly. And so as I’ve gotten older and softer, I’ve wanted to find ways to connect to my daughter and this seemed like a logical way to do it.

CV: When would you say the first big change for Achievement Hunter was?

GR: Oh gosh. Uhhh, the first big change to Achievement Hunter was probably when we hired Ryan? I wanna say was [when] the first new employee we hired. It was Ryan or Michael or Ray, I can’t remember, exactly, the order it went in. But, I think Ryan technically was the first hire Jack and I had after the two of us, and so that was an expansion! Which I never anticipated, — well I never anticipated any of this would be a career —  but Achievement Hunter was designed to be a side project to give me something to do in my free time from Red vs Blue, and for it to start growing into its own full fledged, full time thing where we were actually starting to hire employees just for it. Was a pretty big, pivotal moment for us.

DISCOVER: Is CONAN EXILES worth your time? Or it is just “another survival game”?

CV: And was he originally hired as an editor? Or to actually be in the content alongside you guys at first?

GR: Ryan was hired to be an editor, and to kind of help out with production. But, he quickly hijacked our hearts and warmed his way into content.

CV: How has working on SCHOOLED been different from creating other Rooster Teeth or Achievement Hunter content such as your Let’s Plays, Theater Mode, Red vs Blue, or RWBY?

GR: Well, when we do SCHOOLED, we work with an actual production crew that is efficient and professional and knows what they’re doing. So that’s new to me. Aside from that, it’s fun to watch Michael not be able to curse, because kids are around.

CV: Does his face get red sometimes when he can’t do that?

GR: Yeah, for sure. Jack was actually, I had to reprimand Jack quite a bit. He kept forgetting. I think the very first thing he ever said to the kids during season 1 — which got cut — was, we brought the kids into the room and he looked at them and said, “y’know Santa Claus is bullshit, right?”

CV: I was just curious as to who is the grand curator of all the content you guys produce now?

GR: Trevor Collins is the supervising producer of Achievement Hunter. So, he’s the guy that runs the show. So, we basically do what he tells us to do.

CV: Oh, interesting. So he’s the guy who runs the schedule and puts everything down of what’s going to be coming out throughout the week?

GR: Yup! Last year it was Lindsay, but then she moved onto more talent based stuff and so this year Trevor is taking the reigns. I haven’t been doing it for a little over a year now. Much to the, I think, the pleasure of everybody involved in Achievement Hunter.

READ: Here are 14 video games that will give you a serious case of the Nostalgia Feels.

CV: Just a second question that I was curious about. How often do you find yourself in the office nowadays?

CV: What have you learned from your experiences during the first 2 seasons of SCHOOLED? And, if you could, would you have done anything different?

GR: I learned that kids are not as good at video games as grown ups, even if those grown ups are fuck-ups. And, uh, [laughs] what could I have done differently? I don’t know, I am exceptionally happy with how both seasons of SCHOOLED went, and so it’s hard to think back at anything I would change. It was a pretty rewarding experience all the way around, and I think it made some pretty fun and compelling content, as well. So, I can’t think of anything I would change. Other than maybe hitting Michael with a car.

CV: Was there really a reason to not allow Gavin in this season? Or was it really just because of schedule problems?

GR: It was purely because of schedules. He’s got a very, very busy schedule. And it was just, it’s difficult to schedule around him considering he’s going in and out of town for different productions. So, it was just easier not to try to use him. Also, the ballon was cheaper.

CLICK: It’s the 40th Anniversary of STAR WARS A NEW HOPE. Find out what makes it the best STAR WARS film of the bunch!

CV: Let’s end on a high-stakes question. You definitely seem like the biggest STAR WARS fan in the room. So, what was your favorite and least favorite episode of the Star Wars series, and why?

GR: Oh, that’s easy. EMPIRE STRIKES BACK is the best of the series, because it’s the second best movie ever made. And the worse would be PHANTOM MENACE. Purely, because of the scene where they go, where they swim — It’s the terrible CGI when they first swim down to the Gungans, and they go into the little bubble town. It’s impossible to watch.