Two years have gone by since Cartoon Network aired its first original miniseries, OVER THE GARDEN WALL. A grim fairy-tale about two brothers finding their way through a vast woods, the cartoon became an instant classic with a sizeable fan base. Since its release, the creator Pat McHale started up some spin-off OVER THE GARDEN WALL comics, which then changed hands to Jim Campbell and Amalia Levari, both heavily involved in production of the original series.

The comic (published by Boom Studios) focuses on two ongoing stories. One is about the two brothers – Greg and Wirt – exploring a dreamscape after the events of the miniseries. It’s mostly just silly shenanigans that have no relationship to the plotline of the cartoon. However, this segment starts off with some spoilers for the show, so I would recommend watching the series before getting to the comics.

READ: What happens when Boom Studios’ LUMBERJANES meets up with GOTHAM ACADEMY?

The other story within the comic is much more spoiler-heavy. If you haven’t seen the miniseries yet, stop reading this now.

In this segment, we learn what Anna, the Woodsman’s daughter, was doing while the Woodsman was working for the Beast. In the miniseries, Anna only has one line and we have absolutely no idea where she was before she shows up. All we know is that she disappeared and that the Beast used it as an opportunity to trick the Woodsman into thinking her soul was in the lantern. The OVER THE GARDEN WALL comics give us the circumstances of the Woodsman’s deal with the Beast and how the mix-up occurred. Plus, it provides readers with an excellent new narrative, one about a resilient girl dealing with soul-crushing loneliness.

Anna lives in a big rural house all by herself. She knows how to do all the tasks required to maintain the home, farm the land, hunt for food, and take care of herself. Heck, she even knows how to take down wild boars and make paper from an empty wasps’ nest. 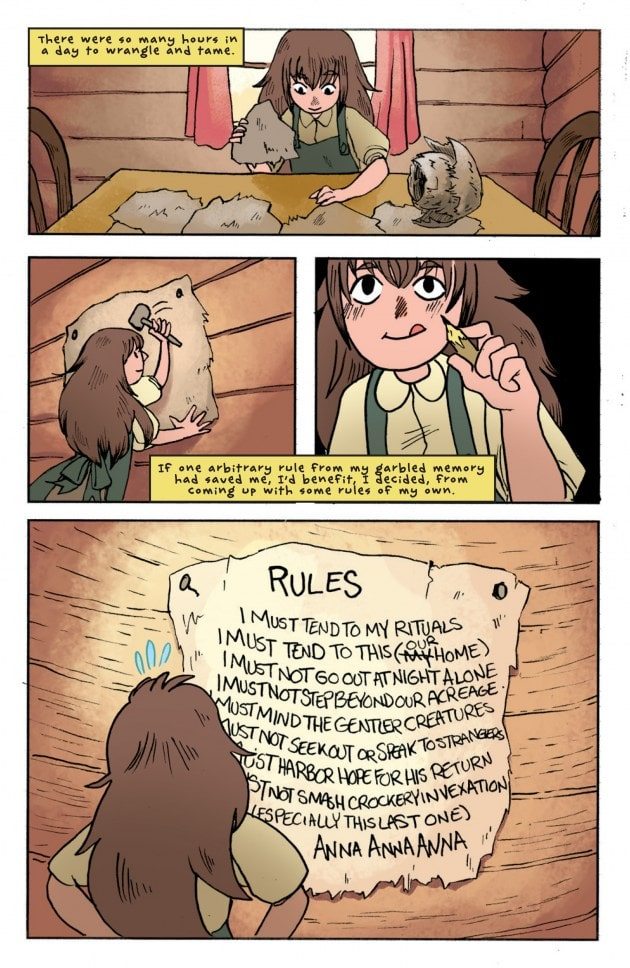 All these things she learned from her mother, who grew up in the country. However, her mother passed away when she was still young, and she had to learn how to care for her anxious, superstitious, urban father while he was still around. The Woodsman made many rules to keep the family safe from the Beast, whom he believed was responsible for his wife’s death.

However, one day Anna disobeys his orders and goes outside at night to collect firewood. She encounters the Beast and just narrowly escapes death by burrowing underground. Yet the Woodsman notices she is gone, and, in a panic, runs into the Beast, who uses the opportunity to trick the Woodsman and keep him far away from his home. When Anna returns, she decides to wait in the house for her father’s return. So she waits. And waits. 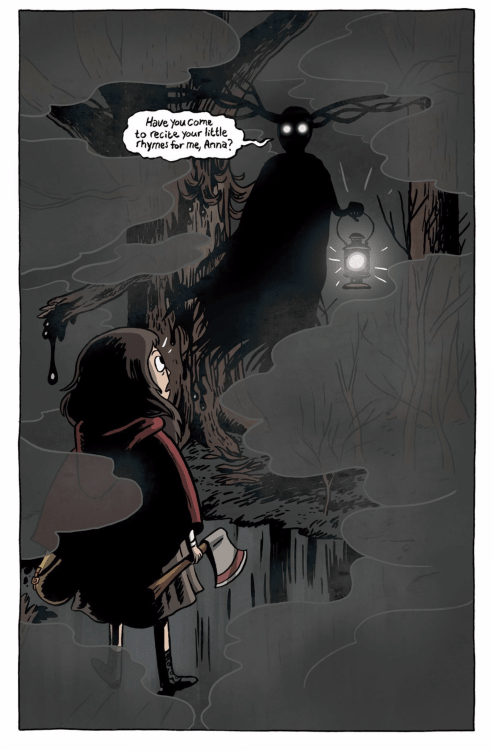 Anna lives her life parentless and alone except for the companionship of some cheesy romance novels, nearby animals, and the occasional visit from her mother’s ghost. While the comic makes it adamantly clear that she is 100% able to fend for herself in the ruthless wilderness, she craves emotional connection on a deep level. One time, she chases after a couple she spots in a dangerous part of the forest and then silently watches them from afar. Anna daydreams about romance, but admonishes herself for something she views as frivolous. She runs away from a boy she encounters because her mother’s ghost can only appear if she is alone, and Anna doesn’t want to lose her.

In many ways, Anna serves as a strong foil to Wirt and Greg. The brothers have each other as company, but Wirt refuses to accept responsibility for his own actions, instead constantly placing blame on Greg and trying to distance himself. It’s only when this consistent blaming leads Greg into a near-fatal deal with the Beast that Wirt finally learns his mistake and stands up for his brother.

READ: Cartoon Network’s STEVEN UNIVERSE can teach you how to deal when you make mistakes!

Meanwhile, Anna is ultimately too responsible. After not listening to her father exactly one time, she punishes herself for months, barely leaving the house and not socializing with anyone. What happened isn’t even entirely her fault. The Woodsman could have come back to the house at any point. He never had to listen to the Beast. He chose to do that. Yet instead, Anna gives up her own desires and emotional wellbeing to make sure she is there waiting, should her father ever return. She is completely willing to set aside the remainder of her childhood to look out for family members who are not physically there for her and didn’t even trust her in the first place. While Wirt must learn how to take on responsibility, Anna needs to learn how to let go of it and live her life. 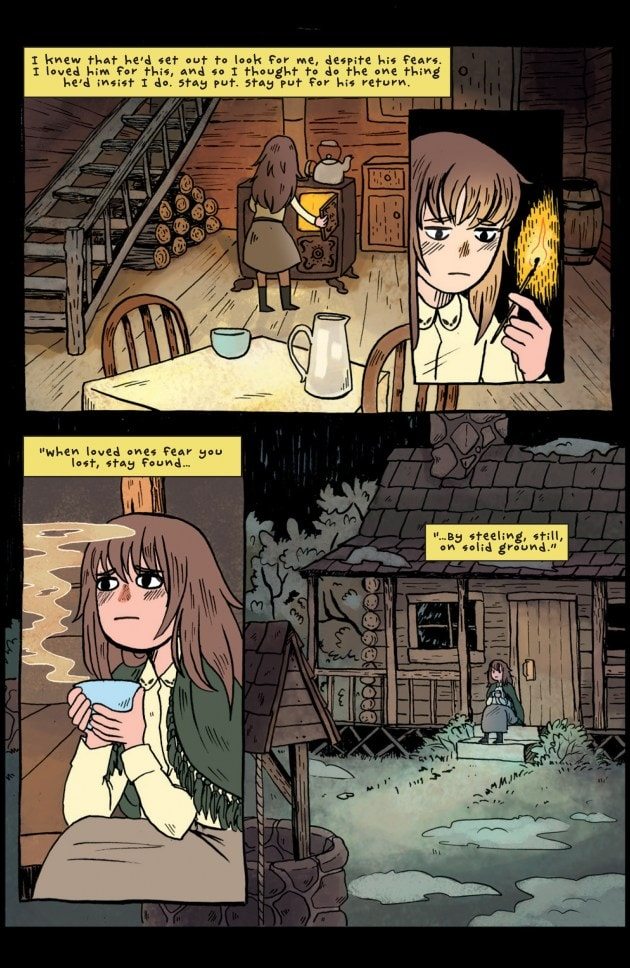 In later issues, Anna starts learning how to pay attention to her own desires. She decides to accompany the boy she meets to a festival. What’s exciting about this is that it’s not portrayed as something Anna HAS to do – she lives on her own perfectly well and agrees with her mother’s ghost that romance isn’t a necessity to life. However, it’s something Anna WANTS to do, and she needs to start acknowledging her wants, whatever they may be.

Ultimately, Anna’s story is an exciting addition to the OVER THE GARDEN WALL series as a whole. Anna’s a cool new character who can handle danger perfectly well on her own but is still flawed and nuanced. Plus, her story puts the miniseries’ theme of responsibility for your actions in a new light. It’s important to be there for family, but you have to know when to stop too.