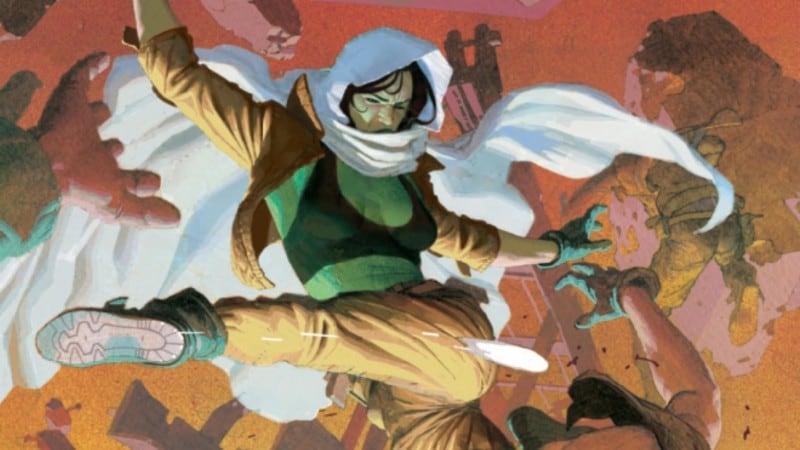 GAMORA #4 is another fine installment in this origin story that further molds Gamora into the elitist character she has become. While at times this issue feels a bit chaotic and rushed just like the collapsing world it is showcasing, the characters are all great and the artwork is absolutely stunning. I really didn’t want the issue to end, and the moral questions facing Gamora at the end of this comic have me itching for the next installment.

READ: Need catching up? Here’s our review of GAMORA #3!

The issue starts out with Klaxon contemplating the dying world, regretting his choice to not save and protect L’Wit during all of this chaos. Meanwhile, Gamora is meeting with the Vestigial family, a group of Zen-Whoberis who were not involved in the Badoon massacre that wiped out their race. Gamora is skeptical of these people at first, refusing to acknowledge her relationship with them, but she is soon persuaded as they offer her the opportunity to kill L’Wit and gain revenge against the Badoon empire. This scene is a prime example of why Nicole Perlman’s characterization is phenomenal. Each character in this issue has a purpose to further along the plot in an intriguing manner. Gamora’s skepticism towards the Vestigial family juxtaposed with her fascination with them creates solid and convincing dialogue.

Eventually L’Wit escapes because of something called a gravity bubble, a phenomenon that alternates the gravity of Ubliex for a short period of time due to the neighboring black hole. Gamora tracks down L’Wit, only to find the Oculus Cult sacrificing individuals. Here, a plethora of altercations and morally challenging issues come into place, creating a page-turning comic book that has you sad to see it end.

LISTEN: Interested in the awesome women of comics? Here’s our podcast on the best women in X-Men!

I have to say, I’ve been really loving this series thus far. Perlman’s intriguing plot on Ubliex is a surprising hit, and all of the individuals facing and interacting with Gamora are very fleshed out. L’Wit and Klaxon have both become characters I hope to see in future Marvel space stories, as their complex personalities leave much room for further development and usage. This becomes especially true in GAMORA #4, as we see Klaxon second guessing his ways and L’Wit poking at Gamora’s morality.

GAMORA #4 does feel like it moves a bit too quickly at times, however. I’m shocked Gamora is so casual about meeting other Zen-Whoberis. It makes sense that she would be skeptical, but it does feel really rushed, as many details of the Vestigial family are left unknown. But perhaps this is Perlman’s purpose. After all, the world is literally about to end and I’d imagine many details are glossed over in times of such a crisis.

The artwork in GAMORA #4 is absolutely stunning. The smooth and cool palettes delivered from colorist Andres Mossa are so aesthetically pleasing. The entire atmosphere in this comic has such a dark and semi-gloomy feel to it, and it truly feels like Armageddon is upon Ubliex. This effect is also made possible by the fantastic drawings of Marco Checchetto, whose characters are drawn with such precision and realistic sizing that everything seems nearly real. Even concepts like a gravity bubble appear plausible because of this duo’s artwork, and that is something that is so integral when telling a tale taking place in another galaxy. The impossible must be somewhat believable in fiction, and the artists do just that with Perlman’s plot.

Overall GAMORA #4 is a wonderful issue. It further the plots along in a natural way, and while I wish we received more details of the Vestigial family, I can’t really complain about anything else. I feel as though the next issue will end on a climax getting Gamora off-planet, and I can only hope Klaxon and L’Wit are with her. I’m very excited to see Thanos and Nebula again, so hopefully they come back into the picture sooner rather than later. Regardless, if you’ve been enjoying this series thus far, you’re only going to love GAMORA #4.