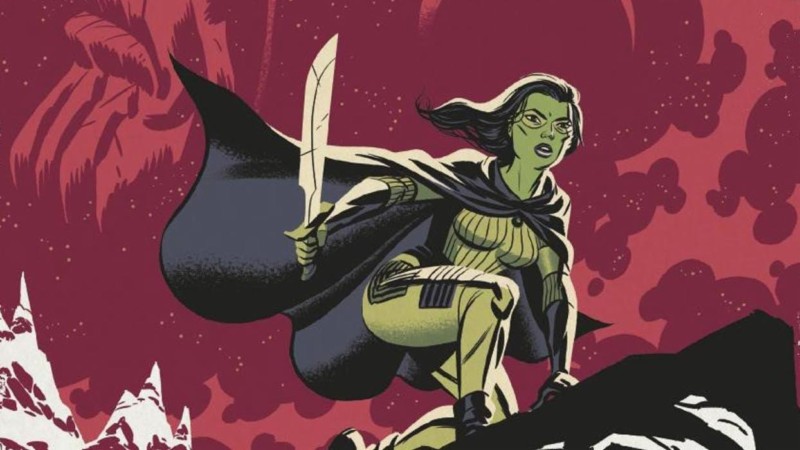 GAMORA #3 is an action-packed issue that throws Gamora from one fire into the next. Continuing her origin story, this comic showcases Gamora’s moral code in a fascinating way, reminding us all why she is the deadliest woman in the galaxy. Nicole Perlman continues doing a wonderful job of creating fleshed out characters to occupy Gamora’s story, and this has been the biggest highlight of the series thus far. Of course, there is also the artwork by Marco Checcetto and Andres Mossa that showcases the epic and chaotic landscape of Ubliex and the crumbling atmosphere around it. GAMORA #3 further enriches the titular character while also furthering the plot in an intriguing manner. 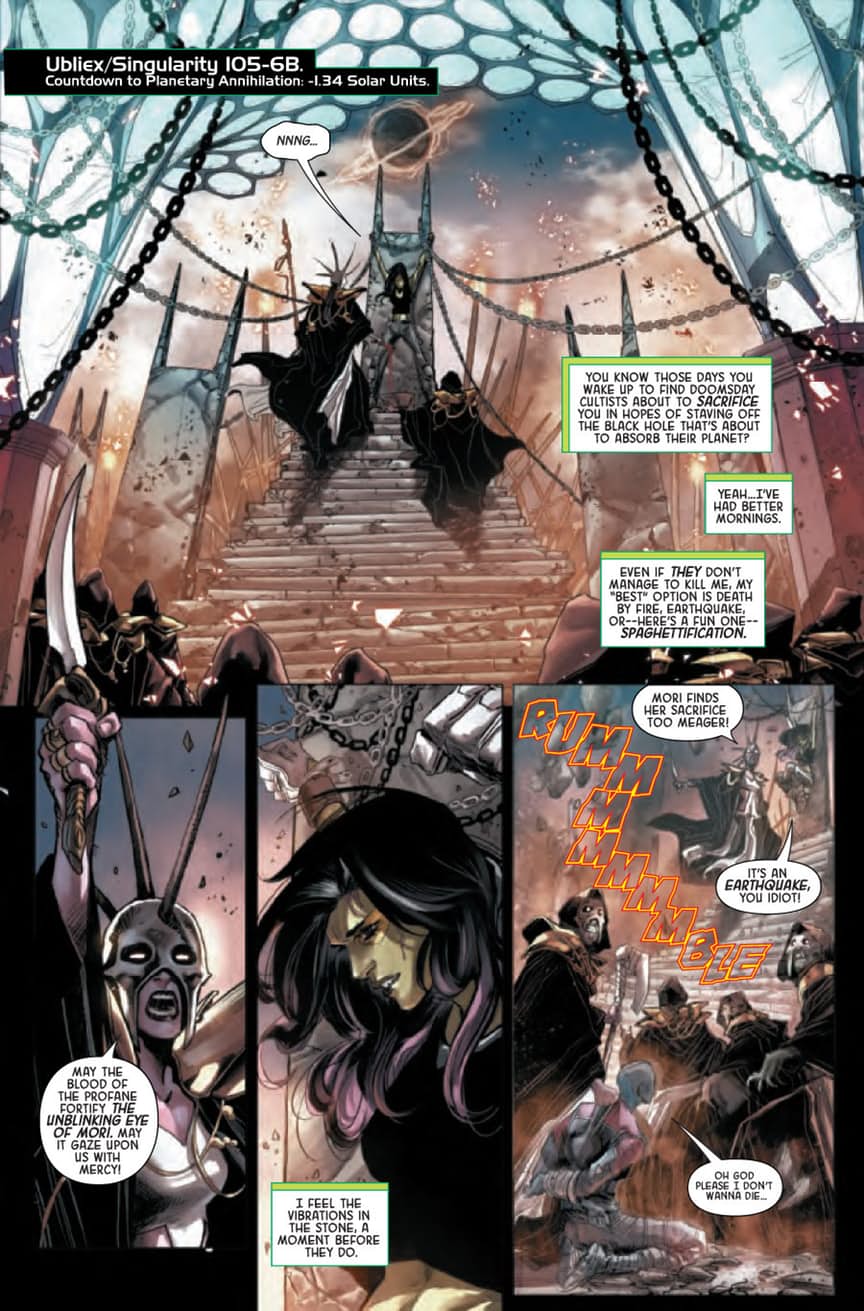 The issue begins with Gamora still tied up to be sacrificed by the Oculus Cult, a group convinced the destructing world around them can be saved with the blood of orphans. Yes, it’s a bit cliche, but Perlman simply uses this group to connect Gamora with the last bloodline of the Badoon: L’Wit, the green haired woman from the previous issue. There’s another prisoner who is next in line to be sacrificed, but thanks to the timing of an earthquake, Gamora is able to escape and take out the cult. While the artwork is a bit choppy at times in this scene, Checcetto’s artwork depicting Gamora using the various weapons at her disposal (an axe, throwing knives) is quite entertaining. After this brawl, Gamora discovers L’Wit tied up and captured in an area run by the Vestigials, a group L’Wit traffics comet dust for. Gamora contemplates what to do next: finish her mission of revenge against the Badoon for killing off the Zen-Whoberi, or letting the girl go whose only sin is carrying the blood of the Badoon. Gamora compromises and unties L’Wit, allowing her to defend herself as they fight to the death. Overall, the plot in this issue is nothing spectacular, but when viewed as a chapter in the entire series, it moves the story along in a smooth and necessary manner.

READ: Need a refresher? Catch up with our review of GAMORA #2!

What I’ve been liking about this series thus far is the characterization of Gamora. She has been true to her brute nature that we as readers are familiar with, yet it’s been portrayed in a way that is young and refreshing. Perlman shows us a Gamora who is very much unsure of her role in life, where she feels her only purpose in the universe is to seek revenge. She is very morose, often wishing she was dead instead of living only to kill. She never doubts that she has the skills for greater things, but her one-track mind makes sense considering how young she is. Even when presented with the moral dilemma of whether it is fair to kill L’Wit, Gamora’s will to follow through on her mission to kill the Badoon bloodline makes her a true antihero, one with an ethical code for justice that doesn’t align with a traditional superhero.

READ: Excited for GUARDIANS OF THE GALAXY VOL. 2? Here’s what we’re expecting!

The artwork from Marco Checcetto and Andres Mossa continues to be aesthetically pleasing. The coloring, especially, from Mossa is smooth and crisp, making every one of Checcetto’s drawings clear. I particularly enjoy the facial expressions drawn by Checcetto, because these characters are going through such immense stress from the impending doom of Ubliex. It is very obvious what these characters are feeling whenever a skirmish or surprise happens, and that only adds to the quick pacing of the book, allowing Perlman to focus on plot rather than add unneeded dialogue when the artwork is doing its job perfectly well. 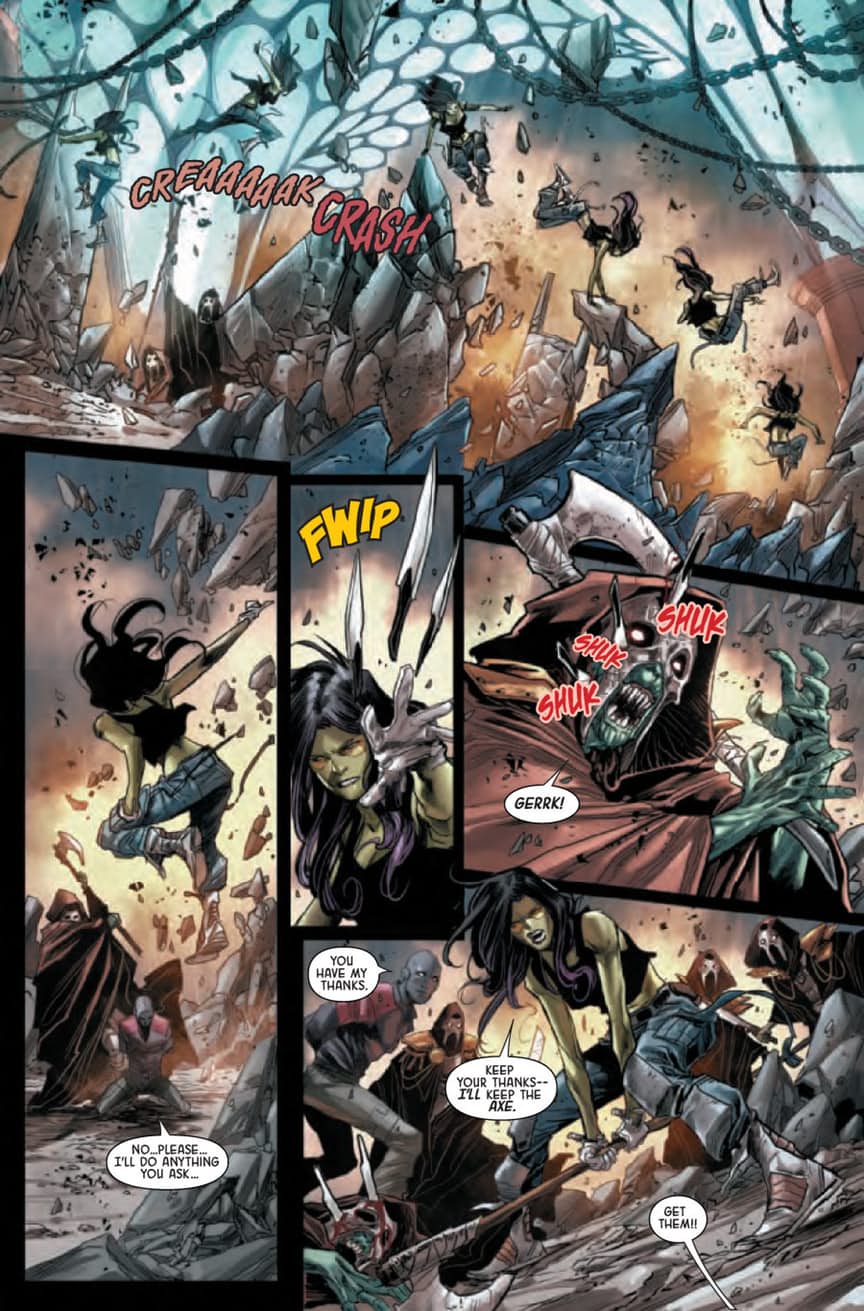 All in all, GAMORA #3 is another solid installment to the series. What’s interesting is that in the previous issue, I was upset to not see Thanos involved at all. I found his role in the first issue to really make the book shine. But not having him in this third issue has me realizing that Perlman is allowing the plot to follow many threads, and it’s quite possible that a larger one dealing with Thanos will occur later in the series. The pacing for this series, and particularly in this issue, gives off the feeling that this will be at least a twelve issue run, allowing for a good amount of plot development. I’m very curious and excited to see what happens once Gamora is off Ubliex, and I’m even curious what characters we’ve met thus far join her in her unquenchable quest.