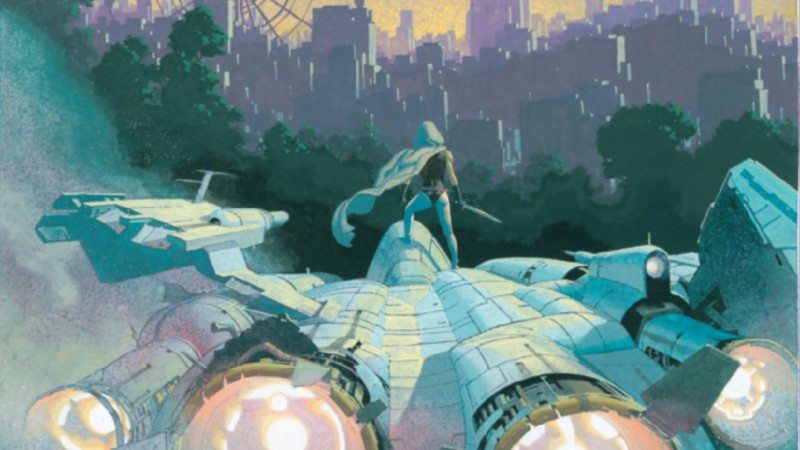 GAMORA #2 hits the ground running as the first five pages deal with Gamora escaping the assault of attacking Badoon in the atmosphere of planet Ubliex. In issue #1, we saw a lot rapport between Gamora, Thanos, and Nebula. In this particular issue, we see less of Gamora and more of two other new characters: Klaxon, a mercenary-type of character hired by the Badoon, and a new unnamed woman with green hair who might be more familiar than we think. Ubliex is about to be destroyed by a black hole, so the world is in shambles. Writer Nicole Perlman does an excellent job of continuing her story of Gamora’s origin, and despite the apparent countdown to doom for Ubliex, she doesn’t rush the plot and instead creates thoughtful supporting characters who can act on their own without the lead role present.

In the previous issue, Gamora rushed towards Ubliex in search of the last descendent of the Badoon Royal Empire. Now on her way towards the planet, she is attacked by Badoon soldiers who cause her to make a risky move and rush into the singularity pull, an atmospheric phenomenon occurring due to the growing black hole around Ubliex. Her ship crashes, and she is assisted by the green haired woman, a character who stole and delivered a package of comet dust to Klaxon. What’s interesting is that this mysterious woman asks Gamora if she is a Zen-Whoberi, Gamora near-extinct race. But before they can go into further detail, an earthquake occurs.

READ: Need to catch up? Here’s our review of GAMORA #1!

After the quake, the two are then approached by a group on Ubliex known as the Oculus Cult, an organization that appears set on sacrificing people in order to stop the incoming black hole. They swarm Gamora and her green haired ally, and the two work well together to temporarily escape the mayhem. However, the two are eventually separated and the issue soon ends after that.

Overall, GAMORA #2 is a fine second issue. I admire how much Nicole Perlman takes her time with setting up her plot for the overall story arc. She doesn’t appear to be in a rush to get Gamora on and off of Ubliex, and her character development of Klaxon and the green haired woman is much appreciated. Too often I will read a comic like this where characters are simple grunts with simpler minds. Here, that’s not the case. We have a character like Klaxon who has many ulterior motives involving Gamora and the Badoon, whose end goal (besides getting off the planet) isn’t entirely known. We then have this green haired woman who proves to be such a strong and wickedly cool female protagonist in a short amount of time. I’m very much hoping, depending on who turns out to be, that she sticks around after this story arc. Seeing her fight alongside Gamora reminded me of Angela, a fierce warrior who fought alongside the GUARDIANS OF THE GALAXY five years ago.

Marco Checcetto’s drawings are stellar. I find his action sequences to be easy to follow while also very entertaining to look at. There is one instance where Gamora is fighting off a swarm belonging to the Oculus Cult right below her ship’s thrusters. Gamora suggests to her green haired ally that the thrusters be switched on so their enemies are burned off: Gamora is confident she’ll survive the singeing. The scene that then takes place is exciting and smooth, like watching a well developed action sequence in a movie. Andres Mossa’s coloring gives the atmosphere of Ubliex a very dark and deep tone. You really get the feeling that a sort of apocalypse (e.g. a black hole) is approaching. Overall, all of the destruction and chaos occurring around the planet is presented in a fantastic manner by these two artists.

READ: Gamora isn’t the only Guardian of the Galaxy member with her own solo series. Here’s our review of ROCKET RACCOON #1!

GAMORA #2 isn’t as interesting as the first issue in regards to plot, but it continues to build Gamora’s past up and that’s important in an origin story like this. I’m disappointed both Thanos and Nebula fail to make an appearance in this issue, but the fact Gamora mentions both of them at different times is a sign that their presence in the universe is important. I’m very curious to see where this story arc goes, what with Gamora’s mission to find the final heir to the Badoon Royal Empire being temporarily halted by an approaching black hole and all. But, if some of these characters being introduced are going to be sticking around in the series (or eventually the Marvel Universe as a whole), I’m very excited for what’s to come.