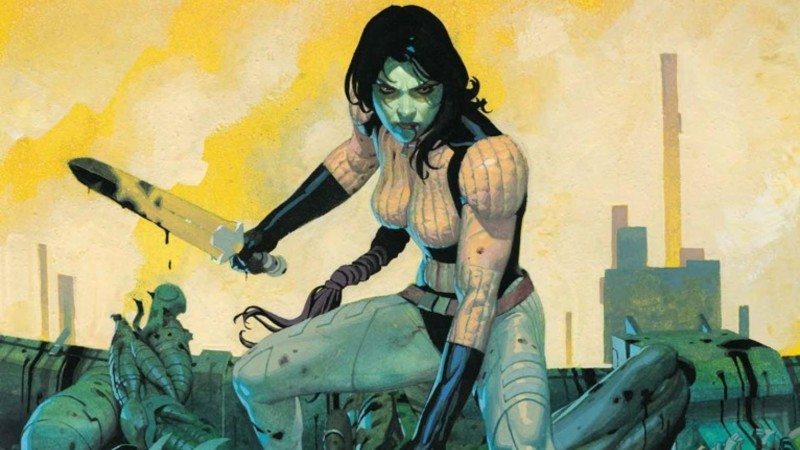 Since the revival of Guardians of the Galaxy, cosmic characters have become much more mainstream in Marvel Comics. One of these characters is Gamora, who has the reputation for being the deadliest woman in the galaxy. Her green hair and skin have become staples whenever a showdown in the trenches of space occurs, and the 2014 GUARDIANS OF THE GALAXY movie has put her in the spotlight amongst those who don’t actually read the comics. GAMORA #1, written by Nicole Perlman, takes us back to Gamora’s life as a teenager and shows us how she acquired the deadly reputation she totes around today.

The issue begins with a young Gamora lying on the ground in a fetal position. She doesn’t seem to be in immediate pain, but the expression on her face is far from jolly. It’s her eighteenth birthday and Thanos has an apparent gift for his adopted daughter Gamora: the chance to destroy the Badoon royal empire that committed genocide against her own race, the Zen-Whoberis. Soon after this scene, Gamora is shown disrupting a Badoon royal gathering and causing complete mayhem, as the Badoon are no match for her fighting expertise. As all of this goes on, Thanos and Nebula (the Mad Titan’s other adopted daughter) look down into the depleting crowd and Thanos reveals his true reasoning for bringing Gamora to Planet Moord: to use her as a distraction while he searches for an item known as the Elemental.

READ: Excited for GUARDIANS OF THE GALAXY VOL. 2? So are we! See what we thought of the trailer!

Without delving too deeply into spoilers, the three characters return to their ship after the chaos with a captured Minister of Information for the Badoon Royal Empire. Nebula is given the task of torturing him until information about the Elemental is revealed, but it turns out he lacks the knowledge they seek. What he does reveal, however, is information that Gamora finds crucial. There’s still an heir to the Badoon royal family that wasn’t on Planet Moord, but in fact, a planet known as Ubliex, a place Gamora refers to as “a dumping ground for waste too toxic to burn.” It’s not a place that one travels to with hopes of returning. Gamora, against good judgement, treks to the planet as soon as this is revealed, and the issue ends. 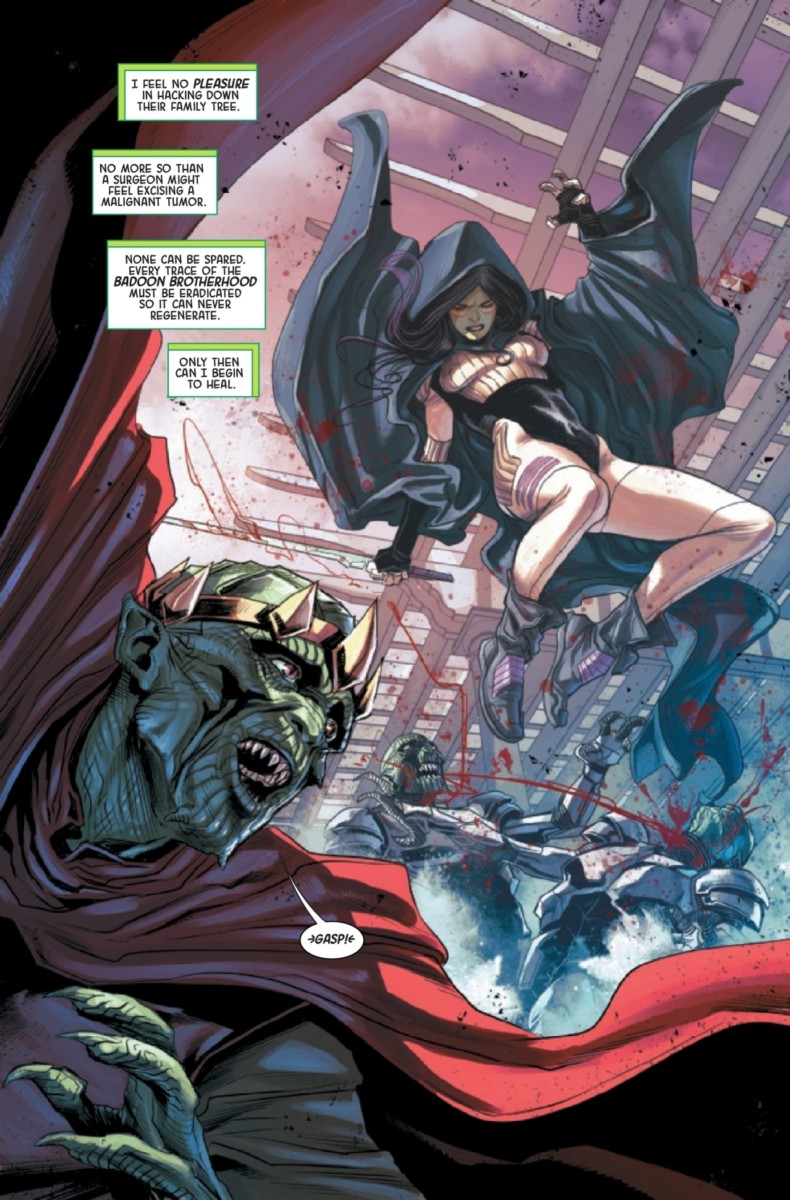 What I enjoy most about this comic is the relationship that Perlman portrays between Nebula, Gamora, and Thanos. Often, when I think of these characters (particularly Thanos and Nebula), I don’t imagine the domestic relationships in their lives. I often forget that Thanos did indeed raise these two women from childhood, and while he certainly is an awful father, he still played that role and it’s seriously interesting to see that dynamic unfold in this issue. Then there’s Nebula and the eternal jealousy she possesses towards her sister for being Thanos’ preferred daughter. I find sibling rivalries to sometimes be a bit cliche, but when it’s as twisted as it is with these two, it’s pure literary entertainment. So while the focus of the series is on Gamora, it’s Thanos who gives her the opportunity on her birthday to seek revenge, and it’s Nebula who has essentially convinced her to fly towards Ubliex for a suicide mission. These two family members of Gamora’s are integral to her character development, and it’s a side of Gamora I never really thought about until reading this issue. 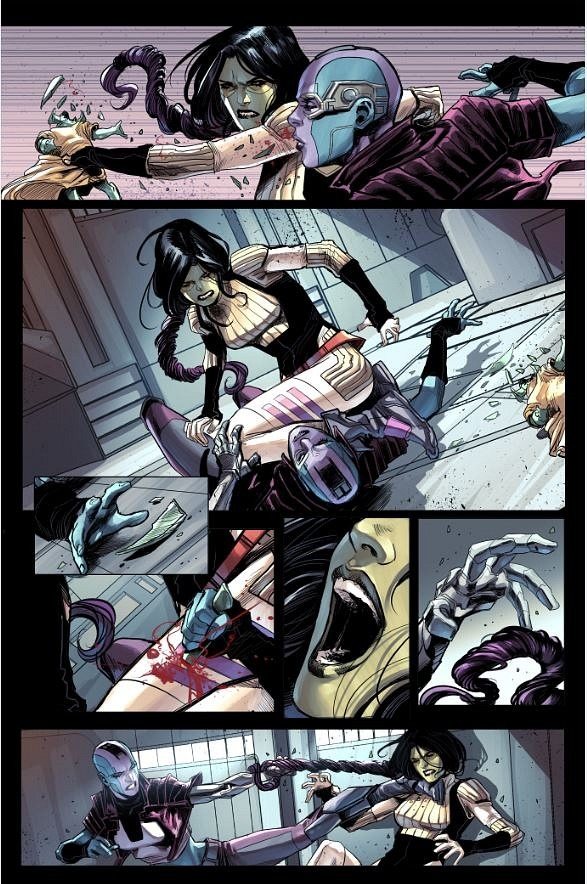 The artwork of Marco Checchetto and Andres Mossa did a fantastic job of immersing me in the story. I’ve never seen the Badoon drawn so vividly and up-close, and I am fascinated by the reptilian-like features they all possess. The coloring of their skin pops with beautiful shades of green, and I really enjoy the overall building structures of the Badoon Royal Empire. The action is well depicted and easy to follow. There’s one page in particular where Thanos and Nebula work their way down a spiral staircase, slaughtering enemies whenever they come into contact. It’s such an intricate and intriguing scene to gaze at. I also admire the depictions of a young Thanos (he’s a bit slimmer) and an even younger Gamora. Checcetto’s choice to give Gamora a fishtail braid is the kind of artistic touch I like to see in origin stories. A shift in even something as simple as hairstyle can show how a character has changed aesthetically.

GAMORA #1 sets the stage for what seems to be an interesting tale of Gamora’s early life. Despite being an origin, however, you might want to check out some back issues like INFINITY WATCH  and ANNIHILATION if you’re somewhat new to this character. For me, in my early comic years, Gamora was one of those characters I had to heavily research on Wikipedia to get the gist of. Seeing a series specifically devoted to her has me excited as she’s finally getting the mainstream attention she deserves. GAMORA has the potential to deepen the relationships between Nebula, Thanos, and Gamora; which would be a wonderful thing for her character development. However, for as much potential this character has, the series as a whole can easily teeter in the generic direction of forced fight scenes with weak plot lines that have no bearing on the Marvel Universe as a whole. I’m obviously rooting for the first option, but only time will tell which path Perlman decides to take this series.