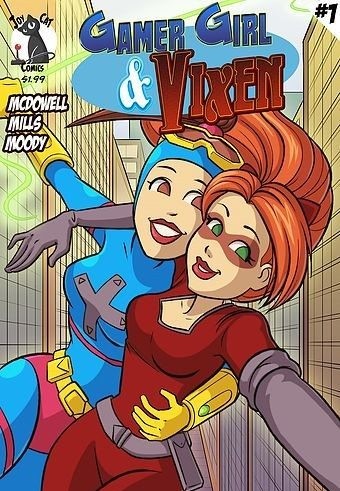 “Love, Lesbians and Larceny” is how one is first introduced to this original, supervillain lesbian love story. If that’s not one damn good hook, I don’t know what is. Creators Kristi McDowell and Sean Ian Mills do wonders with this lighthearted, yet socially important, comic. In a world in which we find ourselves gaining more awareness in the face of blatant ignorance of basic human rights, it’s important that we see all sides of the human condition reflected in characters we get to know and fall in love with in all forms of media.

READ: Ever dream of a punk rock Messiah? Take a look at what our Chris Galvin has to say reviewing PUNK ROCK JESUS!

The first thing I notice when reading GAMER GIRL AND VIXEN is how refreshing the narrative feels. Mentions of queerness—LGBTQIA awareness issues aside—are always welcome when talking about exposure in any type of media. However, I found myself pleasantly surprised at GAMER GIRL AND VIXEN’s uniqueness in more than just its characterizations. Gamer Girl and Vixen—also known as Bianca and Liz—have a proclivity for crime and supervillainy, replacing the typical hero origin story narrative we’ve all become so well-accustomed to. The fact that this likable pair come to know each other due to their separate interests in crime gives the comic an undeniable charm. It’s not just a comic about queerness—it’s a story that stands on its own two feet. 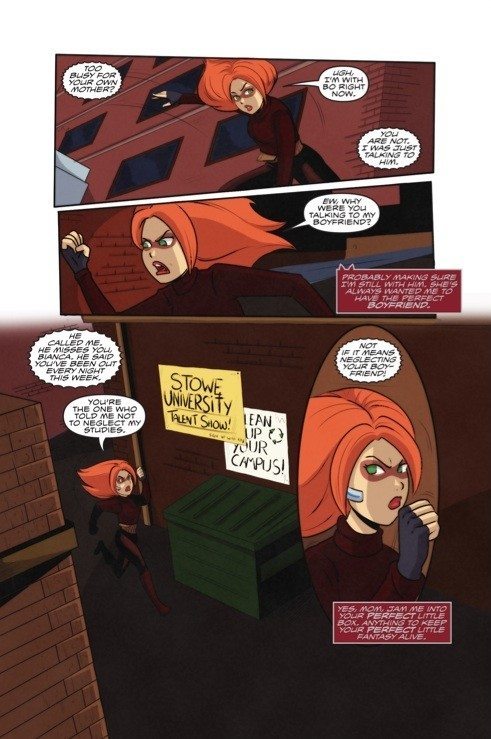 That being said, this comic does something very important for those who identify as queer. Liz and Bianca’s reasoning for getting into crime feels familiar to any person’s issues with identification as well as the fortunate few who could count on the support of a family member. From Bianca’s mother’s over-involvement and jailed father, to Liz’s love of technology shared with her junker father (who takes spare parts for her to tinker with), GAMER GIRL AND VIXEN succeeds in reaching out to readers in a poignant way. While Bianca’s origin the “mother won’t approve” narrative is one that’s familiar for queer and heterosexual communities alike, it also highlights the difference between Bianca’s “secret identity” as Vixen, versus Liz as Gamer Girl. Bianca is closeted due to her mother’s—and society’s—expectations of how she must be, while Liz is openly lesbian. It can be argued that Bianca feels more herself as Vixen (especially after her costume to change to impress Gamer Girl, meow!), while Liz is exploring new dimensions of her life in crime as Gamer Girl. This comic succeeds in riding the line between media exposure and telling a truly good story. No one likes a story that comes off as “preachy,” and GAMER GIRL AND VIXEN is anything but.

LISTEN: Enjoyed the autobiographical art that was FUN HOME? Listen to one of our latest podcasts on Craig Thompson’s BLANKETS!

The characters in this comic come in all shapes and sizes and frequent a college campus, arguably one of the most eclectic communities a person can experience. Appropriately, none of these differences are pointed. They simply exist as such, and, as a reader of many comics that at best try to spread awareness in its obviousness, or at worst try to capitalize on it, it’s comforting to read a comic that simply is. 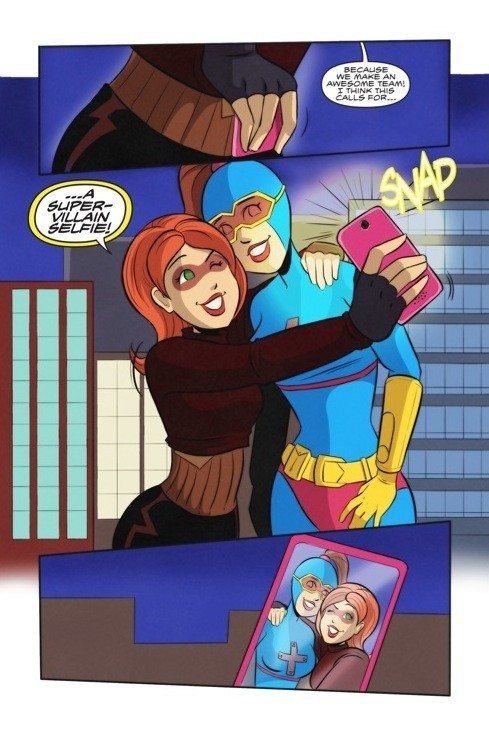 Plus, it’s funny. And cute! It reads like an old Cartoon Network series: Fun and colorful art, with just the right dose of cynicism and self-awareness.

Two issues in and we’re introduced to a new hero to face our new favorite supervillain duo. A comic in the perspective of supervillains is interesting enough, but now they have a threat in a costume to fight back. What will happen? I definitely want to find out!

CLICK: Want to know what happens to GAMER GIRL AND VIXEN? Support the creators on Kickstarter and find out!