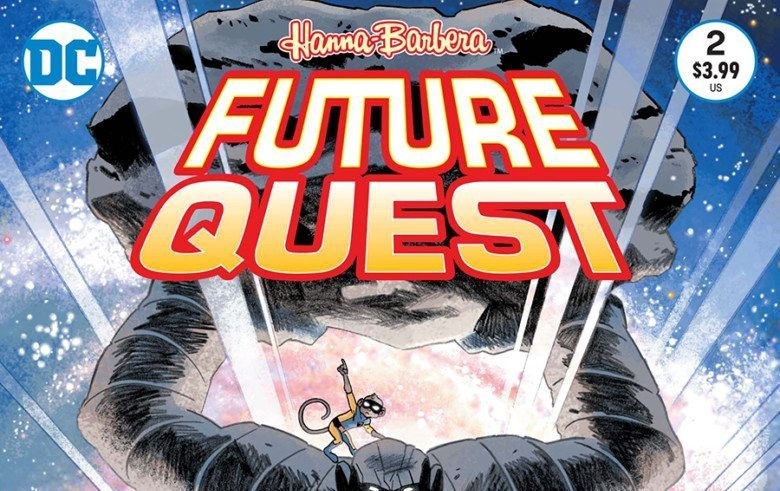 DC Comics’ Hanna-Barbera sub-line has been lost in the shuffle a bit since “Rebirth” began. However it’s heading into its second month, adding new properties while continuing the initial titles. Of those first titles, one of the more critically successful was FUTURE QUEST, the HB universe-spanning title from Jeff Parker and Doc Shaner.

The second issue of FUTURE QUEST begins with a flashback on the planet Azmot; as a battle pits Space Ghost, the Galaxy Trio, and the Herculoids against Omnikron, the planet-devouring creature introduced last issue. The climax of said battle leads to the vortex that we saw earlier in the series bringing several creatures to Earth. Space Ghost enters the fissure to save his sidekicks: Jan, Jace, and the space monkey Blip. At this point, the issue transitions back to Earth and picks up with the image that ended FUTURE QUEST #1: the intergalactic hero hovering in front of Johnny Quest, Hadji, and Ty. 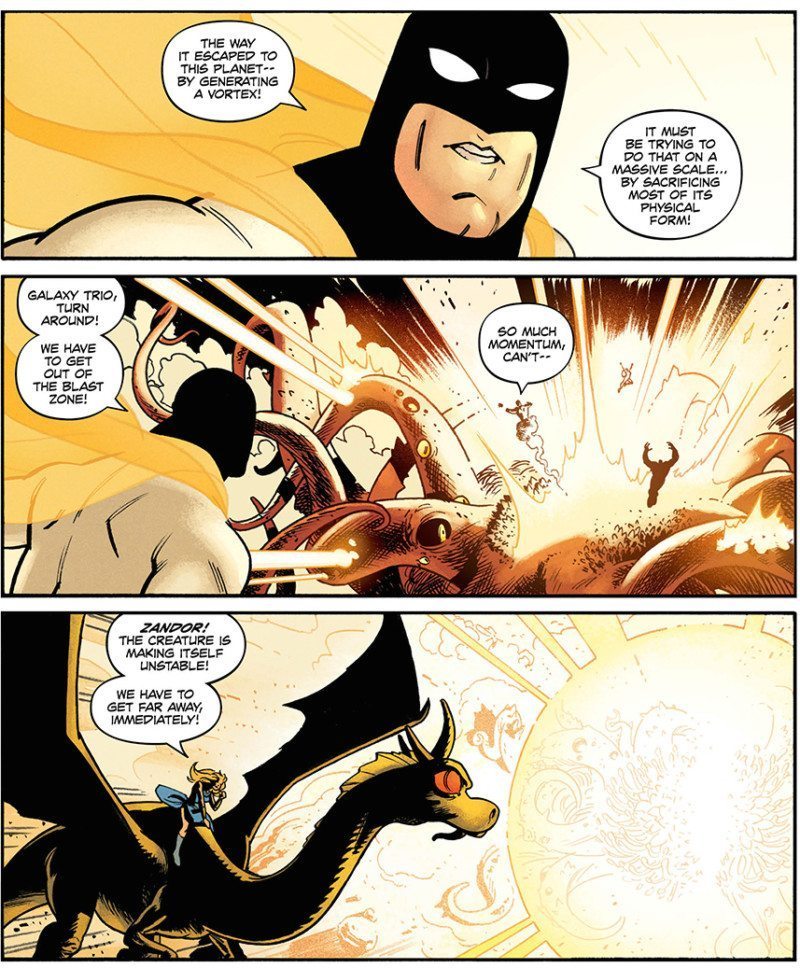 Space Ghost quickly disappears, but not before pointing Johnny and others towards the trio’s crashed ship. They’re able to rescue Jan and escape from F.E.A.R.’s forces thanks to help from Race Bannon, Birdman, and Doctor Quest. However they’re unable to stop their enemies from capturing Jace and heading to find the next fissure. Worse yet, the issue ends with the revelation that Dr. Zin has recruited one the Quest family’s deadliest enemies to help him.

I was a really big fan of the first issue of FUTURE QUEST. In my mind it did exactly what these Hanna-Barbera books should do. Parker updated the characters for modern audiences, and told an adult-oriented story while still keeping the characters true to what’s made them memorable over the last fifty years. In other words, it got everything right that WACKY RACELAND #1 got so wrong. The second issue is more of the same, crafting solid action sequences around a dream team of Hanna-Barbera characters. However, there are definitely flaws with the second issue. 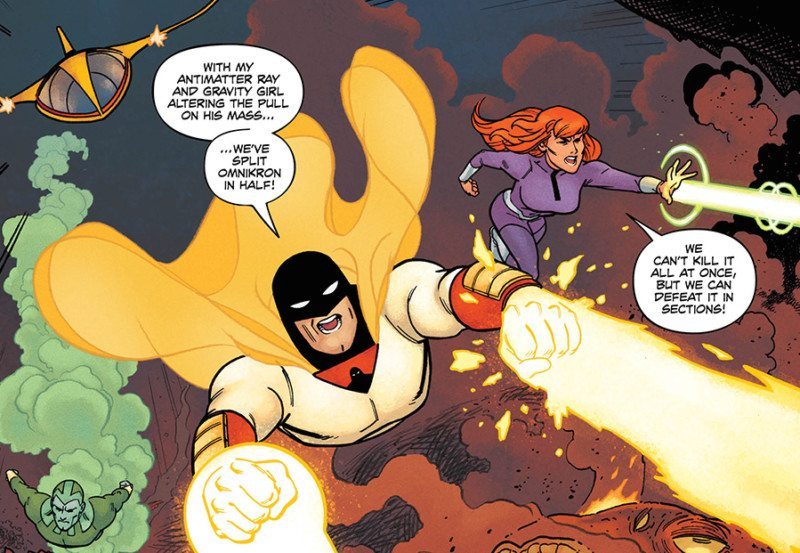 The main problem with FUTURE QUEST #2, especially compared to the first issue, is its pacing. While the issue is fun to read, there’s very little plot to it. The first half is a flashback space-battle sequence that answers no questions about Omnikron. The second half is a drawn out chase sequence that in the end does nothing but place Jan with the Quest and Birdman characters. We’re left with no better idea of what the overall plot will be than we had at the end of the first issue, which leaves the second issue feeling a bit like filler. While I’m not asking for all the answers right away, the series will need to start delivering soon because the appeal of having all these characters together will wear off sooner or later.

READ: How does FUTURE QUEST stack up against DC’s other Hanna Barbera properties? Find out in our WACKY RACELAND review.

One area where the second issue matches up with the first is the art. The issue is split between three artists: series regular Doc Shaner, Ron Randall, and Jonathan Chase, yet it’s barely noticeable due to how similar the three styles are. I found myself having to check the credits page several times just to see where one artist’s work ended and another’s began, as all three provided kinetic art that really pops off the page with energy. Colorist Jordie Bellaire deserves a great deal of credit as well. The bright, sunny palette used throughout the issue really evokes the feel of the Saturday morning cartoons from which these characters sprung. 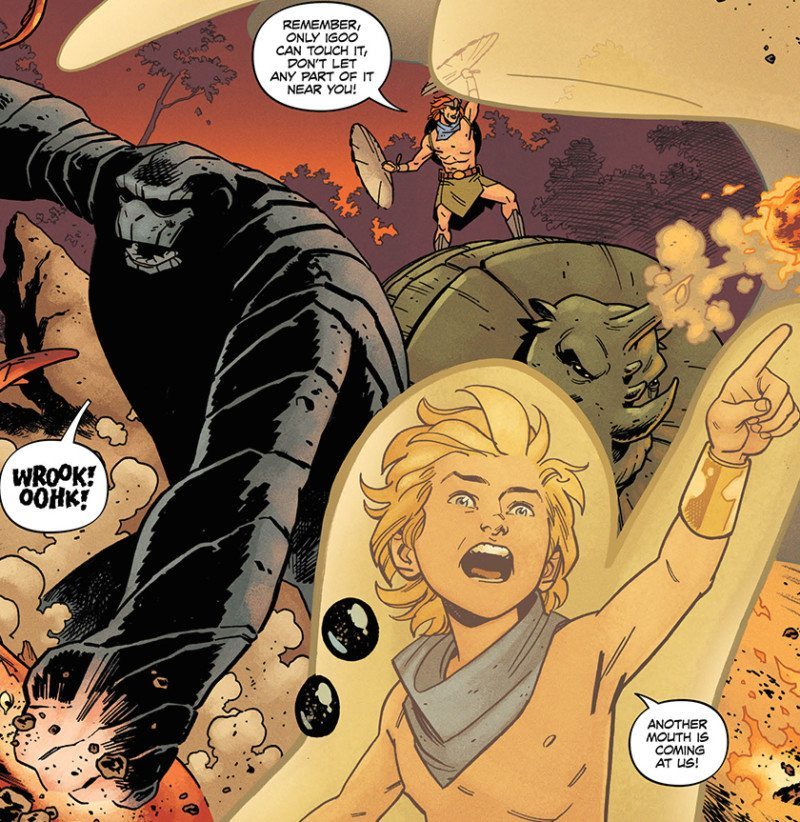 FUTURE QUEST #2 is a solid read that will most likely be enjoyed by anyone who liked the first issue or even those who simply have fond memories of Hanna-Barbera’s 1960’s action cartoons. However the slow pacing of the plot hurts the story somewhat, and is a problem that will become much more noticeable if something doesn’t change before the nostalgia-goggles wear off.