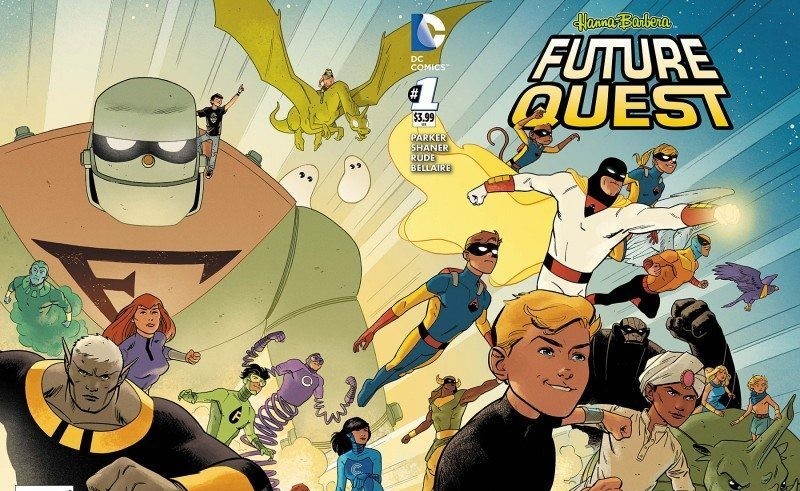 FUTURE QUEST combines the talents of writer Jeff Parker and artists Steve Rude and Evan Shaner for an adventurous story staring some of Hanna-Barbera’s most iconic characters. From the inquisitive Team Quest to the heroic Inter-Nation Security, everyone gets a slice in this first issue.

The opening scene of FUTURE QUEST finds the Captain of Space Force Unit 90 on a distant planet several years in the past. He and his crew are working together to stop the spread of a world-destroying entity by the name of Omnikron. They realize that in order to destroy Omnikron they will have to use the full power of their lasers, which will ultimately kill them. To protect their captain, the crew put up their shields and sacrifice themselves to destroy Omnikron. The story then flashes to the present on Earth, where we follow Johnny Quest and his adoptive brother Hadji, as they explore the Everglades in Florida looking for mysterious vortexes. These vortexes are portals to different worlds, essentially acting as the multiverse for the Hanna-Barbera characters.

For those unfamiliar with multiverse theory, it simply means that all the Hanna-Barbera characters co-exist with one another in alternate worlds. Prior to the events in FUTURE QUEST, these parallel worlds have lived separately. However, something is causing these vortexes to appear and it’s up to Doctor Quest and the rest of his crew to discover the secrets. Upon realizing that these anomalies are far too great for Team Quest to handle alone, Doctor Quest enlists the help of two Inter-Nation Security agents. I appreciate that writer Jeff Parker is not having every character from the Hanna-Barbera universe come from a alternate world. There are certain characters that are within the Hanna-Barbera universe that can easily exist in the same world. However, characters like Space Ghost, the Herculoids, and the Impossibles are a bit too “otherworldly” to exist with the more grounded individuals of the Hanna-Barbera universe like Johnny Quest or Birdman. 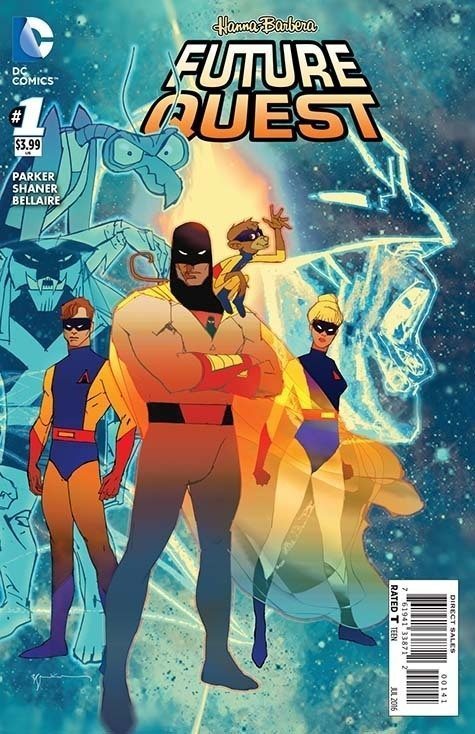 Parker uses the two Inter-Nation Security agents to explain to the reader not only what the vortexes are but also to set up the villain Dr. Zin, who is also after the vortexes for his own sinister purposes. After mentioning this, some of Dr. Zin’s robots attack Race and Bandit while they’re inside a helicopter. Johnny and Hadji take cover from the robots, and in doing so they stumble upon more vortexes which show other Hanna-Barbera characters from other worlds. The issue wraps up with a kind boy named Ty who rescues Johnny and Hadji from Dr. Zin’s robots. Immediately after Hadji asks Ty to take them to where Race’s helicopter crashed, they are interrupted by another famous Hanna-Barbera character who has somehow entered through their vortex.

READ: About another epic crossover! Check out the finale to the Batman and Teenage Mutant Ninja Turtles crossover!

This was quite a jam packed issue with a lot of information given to the reader, but Parker manages to provide enough content without making the reader feel overwhelmed. I must commend Parker on his ability to balance all these characters from shows with entirely different tones. For now, the scenes involving Team Quest felt like an episode of Johnny Quest and the scenes featuring other characters felt like their respective shows. It’s the first issue so there has not been too much interaction between the various characters of the Hanna-Barbera universe. I’m sure once the story progresses readers will get to see more of these individuals play off one another. However, when that eventually happens I don’t know how Parker will combine these characters that have very different and distinct tones. Only time will tell if FUTURE QUEST can have these characters interact while still maintaining their respective tones.

As for the artwork, the team of Steve Rude and Evan Shaner did a tremendous job at transitioning these cartoon characters into comic form. Johnny Quest and his cast of characters appear similar to their TV show counterparts but more fluid. The bleak scenes in space offer a striking contrast from the bright and vibrant world of Johnny Quest. The space scenes used more red and brown colors to illustrate the dire outlook for the Space Force Unit.  The landscapes and color choices really help to set the tone of this supersized first issue.

This first issue of FUTURE QUEST does an excellent job setting up the story while simultaneously introducing these characters. I recommend checking this comic out for anyone who is a fan of the Hanna-Barbera cartoons, as Jeff Parker truly captures the spirit of the characters introduced so far. For anyone who is not familiar with the Hanna-Barbera cartoons, this is a fantastic comic to act as your introduction to the variety of characters within this colorful universe.