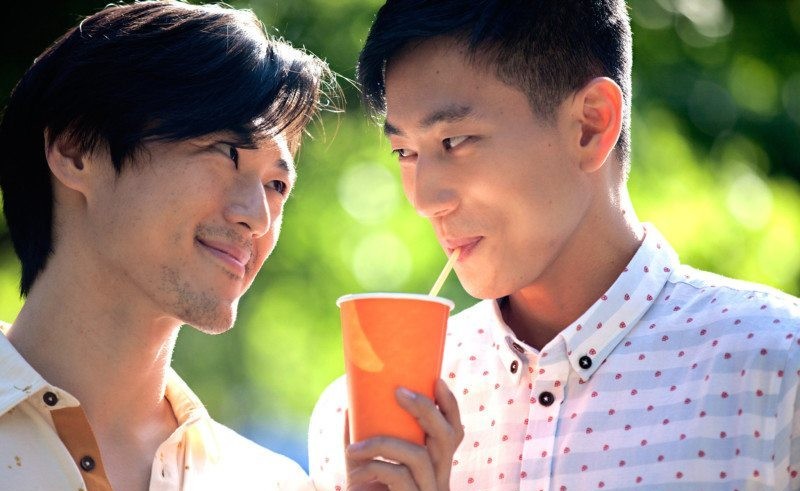 FRONT COVER is the type of film that could have gotten very preachy very quickly. The indie rom-com breaks the monotonous mold of traditional protagonists for the genre. While Asian-Americans, or homosexual males, are often friends of leads, they’re rarely the subject matter. When covering both the Asian-American experience, as well as homophobia in American and Chinese culture, there’s a lot of social commentary to absorb for the movie. But what FRONT COVER does well is gracefully combine this commentary into a cohesive, natural-feeling narrative.

Many films come off as “preachy,” meaning they focus more on the moral than the film itself. The Christian film GOD’S NOT DEAD provides a clear example of a bad movie whose only purpose was to provide a narrative sermon. FRONT COVER, on the other hand, keeps a clear story and compelling relationship to keep it moving. FRONT COVER is a wonderfully well put together film that shows a real understanding of how to best discuss the issues at hand.

The film covers the relationship between a Chinese-American fashion designer and his subject, a Chinese actor. Ryan (Jake Choi), the photographer, is struggling to get into a racially biased industry. Ning (James Chen), the actor, is trying to live the masculine, hetero lifestyle considered normal by Chinese culture. An uneasy friendship forms between the two as they grapple with their different cultural and sexual identities. As they become closer, their friendship blossoms with their inner conflicts interlocking. When they do finally come together romantically, it’s a powerful moment where cultural barriers no longer hold them down.

Combining the struggles of racial identity and sexuality pays off better than one might expect. The focus is always on how their relationship is blooming, keeping the narrative moving. The social issues help to inform their actions and environment, but it isn’t the only substance the movie had. The narrative of the film is strong enough that the messages came through the natural progression of the protagonists’ relationship. It’s a testament to how strong the story is that the film never comes off as especially preachy. The dialogue feels clunky at times, seemingly pulled from genre tropes. However, it doesn’t outweigh the engaging plot or character development. FRONT COVER manages to have its dual messages work hand in hand in a plot that makes sense and flows wonderfully.

One strong example of their dual identity crises is when Ryan and Ning first go out to dinner together. Ning doesn’t understand how Ryan is able to openly be gay in America, and Ryan expounds upon his struggles. Both characters get to struggle with their cultural and sexual selves. Ryan is facing discrimination by Ning for not being straight or Chinese enough. Ning, on the other hand, is struggling to understand American culture, while still being a closeted gay man. It’s a bit on the nose at times, as it’s the cliche “we’re like fire and ice, but can we TRY to get along?!” rom-com moment. However, what with everything these characters are juggling, the fact that it isn’t entirely on the nose is commendable.

The romantic twist their relationship took actually comes as a delightful surprise. These characters do become involved with each other in the later half of the film, adding a new dynamic to the film. As Ning opens up more about his sexuality, Ryan opens up more to his Chinese roots. The relationship these two have helps both come to terms with repressed aspects of themselves. What makes the relationship so interesting is that it’s not entirely obvious that it’s coming. These characters fall into the “opposites attract” trope, so it’s not a total stretch. However, we get to see these characters come to terms with themselves without love. They don’t need to hook up in order to evolve. Rather, their journey to accept themselves makes them open to a relationship, making it more rewarding. If the film had made Ryan and Ning best buddies, it probably could have worked just as well. But having the two open up in a more intimate way made for more raw, emotional exploration of who they are.

READ: Did you miss the New York Asian Film Festival? Check out our wrap-up of the festival here!

The two lead actors keep FRONT COVER rooted in reality. Most all of the side characters feel like one-dimensional placeholders for the story, and their basic dialogue makes that apparent. But Choi and Chen keep the film rooted in real emotions. The two are layered and complex, struggling with their dual identities in different ways. Chen especially shines through in his portrayal of Ning. Ning is the more complex character, as he is learning to come to terms with his cultural perception of homosexuality. Not to say that Ryan isn’t complex, but the emotional journey Ning goes through is the more engaging progression. Ning has to balance out his masculine Chinese image with the openly gay man he could be with Ryan. He’s constantly in conflict with himself, and Chen portrays this conflict beautifully. Again, it’s a testament to how well FRONT COVER juggles its social issues that both characters had such realistic and natural depth.

Overall, FRONT COVER does a great job balancing out its social commentary with its focus on a single relationship. The film doesn’t have an especially phenomenal script, and its directing choices are not groundbreaking or outstanding. But FRONT COVER does what it set out to do wonderfully—examine a relationship between two individuals, grappling with their racial and sexual identities. As an indie rom-com, FRONT COVER offers a voice that’s new and refreshing. By not letting the message weigh down the story’s progression, Ryan and Ning’s relationship is exciting and unpredictable. FRONT COVER accomplishes exactly what it sets out to do, nothing more, nothing less. What it accomplishes is creating a relationship outside the genre norm, and thank goodness for that.