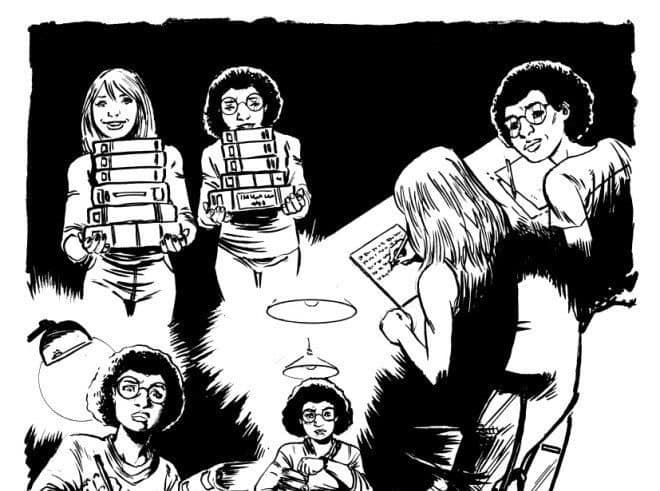 So for my first article with Comicverse, I didn’t have anything specific in mind.  I thought I would maybe contribute an article here and there and discussed some ideas with fellow contributor and British citizen, Tom.  I threw a few ideas at him and then he made a request.

‘Could you write an article about a comic page from how you came up with it to how it ended up?  Toodle pip and stiff upper lip!’

I’m not sure if those were his exact words but it amuses me so there you so, that’s how it happened.  I kind of thought about what page I could possibly talk about without sending people to sleep.  I personally find the theory behind making comics very interesting but not everyone is the same.  Some people just want their comic stories and they want them now!

After some thought however, I came up with the absolute perfect page to talk about, well at least I hope it will be.  Here is the page in question with art by Antonio Brandaos: 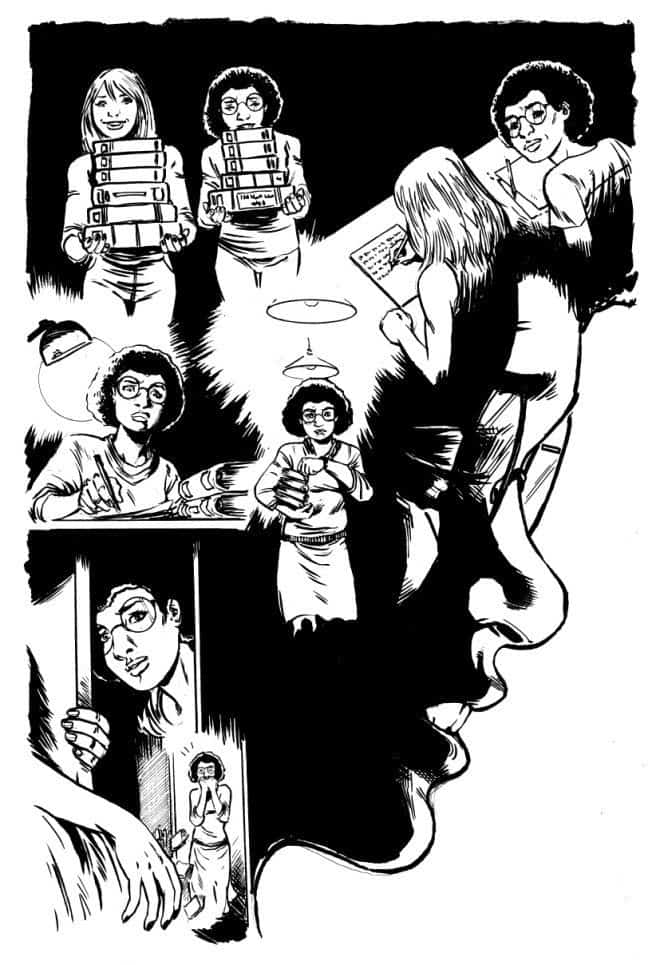 Now let’s talk about how we got there.

The page in question is from the first issue of Living With Death: Murder At Oxford, an old school crime series that is essentially my love letter to classic crime fiction.  For more about the book, please check out its official Facebook page!

Sadly, Living With Death (with its own blend of irony) refuses to live.  I came up with the idea in 2012 and have had a lot of let downs and disappointments regarding the book.  Right now it is dormant until I come with yet another plan to get it to live.  I’m not giving up with the book, not by a long shot but sometimes talking about it is difficult.

However, this was a page that I like for a couple of reasons.  Whenever I’m writing something new, I like to come up with something different to differentiate it from my other work or anything else out there on the market.  It’s a hard market out there and I like to try to think of something that can maybe make my books stick out a little.  It was this theory that led to the ending of Sparks which, from what I hear from those that read it, had the desired effect.

When thinking about how Living With Death was going to be presented, I wanted something to be equally different here.  I wanted to give it a unique signature that fans of the series could learn to identify and become familiar with.  A really good example of what I will refer to as from now as the ‘signature page’ is in Robert Kirkman’s Image superhero comic ‘Invincible’. In the book, since its first issue there has been a splash page that has repeated itself throughout the series.  It features a character extending their hand out towards the reader following or leading up to a big revelation.  I’m sure fans of the comic will know what I’m talking about and those that don’t will simply have to go read it (well worth your time).

So I kind of wanted to do that but while Invincible does it every 10 issues or so I wanted to have something that would feature as much as possible and become Living With Death’s ‘signature page’.  After thinking it over for a few days, it hit me like a bolt of lightning.

Something that really interests me as a person is how we each perceive events.  You can get a group of 10 people to witness an identical event and after you ask them about it a few hours later you will get 10 very different recallings.  We just each interoperate things differently and that’s something I find very interesting.  It’s something that we don’t see in media often but has recently been used to brilliant execution in ‘Gone Girl’ and popular ‘Showtime’ program, ‘The Affair’.

I decided that it would be interesting that when a person of interest or suspect was being interviewed that rather than have a page of dialogue, we would ‘see’ inside their mind at their version of events.  These events could be true, false or just misconstrued and presented to the reader as ‘fact’.  This way we could maybe get a big source of red hearings, questions and something visually unique for the book.

The question was how to pull it off.

How to decide how it looks

I thought of a few layout concepts and didn’t find they worked.  Either I didn’t think they would work or the original Living With Death artist found it hard to understand what I had in mind.  I knew what I wanted, I could see it quite plainly in my mind but I had no idea how to show it on paper.

I thought I would perhaps have to scrap the idea when I fortunately got lucky in of all things, a comic book cover. 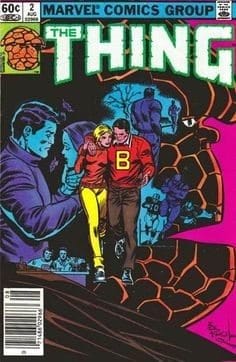 The cover in question is from the second issue of Marvel Comics ‘The Thing’ drawn by Ron Wilson.  I saw it on the back of the first John Byrne Fantastic Four Omnibus and I knew it was roughly what I wanted.

Of course, there had to be differences.  This was going to be an interior page, not a cover and there needed to be dialogue on it (which, knowing me was going to be quite verbose).  I knew though this is what I wanted so next came the scripting part.

The following is a script extract from Living With Death: Murder At Oxford, issue one.  It’s owned by me, please don’t steal it or I’ll send Mel Sparks to your house.

Okay this page requires a bit of explanation.  I would like the majority of the book to be a side view of Beth’s head with the panels inside her mind like we’re viewing her memories.  I kind of want the same effect as on this cover from Thing but in more detail with each panel being on its own.

If it’s too much of a nightmare or you’re still not quite sure what I mean let me know.  If you can pull this off that would be brilliant as I would like this structure to be this books ‘signature’.  Basically its letting us inside the characters mind letting us see their memories (which may not be accurate or even truthful).

Beth smiling and shaking hands with a smiling Georgia as they both try to hold up a stack of heavy books each.

We met on our first day here. It was great to meet someone I had so much in common with.

From Georgia’s right while she copies down notes frantically like her other students while sitting in a lecture auditorium.  We’re quite close to her so we can’t see many people except for Beth who is sitting to her right and is the only one not taking notes and is seemingly transfixed by Georgia.  This should be our first hint that they were closer than first indicated but this won’t come into play until much later. We might see a male student behind Beth but no one else really, just as long as we know where they are.

She was so smart and really pretty too.  She told me she got teased a lot, but I think people were just jealous, you know?  If it hadn’t been for my roommate she would have been right at the top of the class.

Interesting, smart yet lacking in confidence.  When did you find her?

Beth is sitting in the University Library hard at work jotting down notes from a stack of books alone while sitting at an old table.  All around her we see other groups of people studying together and clearly ignoring her while she sits alone.

I was having a hard time focusing in class…I stayed out late studying.

Running down one of the dorm corridors Beth is holding a lot of books under one arm while checking her watch and looking a little bit guilty.  We can see all the rooms are closed except for Georgia’s which is open just a little.

So I came by later than usual. If I’d had any idea…

On the ground looking up at the dorm room as Beth drops her books.  We should see one of them already on the floor and two others still falling in mid air.  The dorm room is quite small and just has enough for the two beds inside and a wardrobe on the left and one on the right.  There’s a small window and a table with a lamp but that’s pretty much it.  On the bed on the right we can see Georgia’s limp hand hanging off the side of the bed.

I just see it over and over again in my mind… You have to… You have to find whoever did this to her!

Of course, with a few hours to spare I expect.

When I was scripting it, I knew this was going to be a regular thing but I wanted to keep that a secret from the reader.  I omitted this page from issue two but had it appear in three and four.  I wanted people to think it was a one off (underlining the ‘First Impressions’ subtitle of issue one like many, many other things) and then surprise them by bringing it back.

It was going to be the staple of the series and I still hope that one day, it will be.

Like I said, Living With Death has been the victim of a bit of a rollercoaster history.  Some of it is my own errors, some of it not so much.  The first artist who completed the first issue (available at a flea market near you!) did an okay job with the page.  I don’t have the art but there was something missing from it that I couldn’t quite put my finger on.

The second artist (rollercoaster, see?) came on to do issue two-four and then go back and do issue one.  They only worked on the book for a few months and produced some lovely pages but I sadly never got to see them do the ‘signature page’ before personal problems interfered with them finishing even the second issue.  I am confident that this artist would have done a wonderful job and I hope to have them draw a future Living With Death arc to see them bring this page to life in their own way.

Newest and current, Living With Death artist, Antonio Brandao I thought did a fantastic job with the concept.  He didn’t ask any questions, he just did it and I think the results speak for themselves.

Well minus lettering and all my dialogue but there you go…

The page ultimately took 2 years from my writing it until Antonio drew it.  This is because of the issues outlined above but also because I like to write things well in advance.  It wasn’t unusual for me to write something and not see the art for 8 months or longer.  In case anyone out there is wondering, I think Sparks still holds the record for longest gestation period between script and art.

Well that’s for comics I wrote that got drawn and published that is.  For comics that I wrote (or co-wrote) and got drawn and didn’t get published…that’s another story for another time.

I hope some of you found this interesting!  If you have any questions or comments please let me know here or on Twitter @glenn_matchett.