MY FRIEND DAHMER is a memoir written and illustrated by Derf Backderf (known mononymously as Derf), which follows the creator’s experience as a high school acquaintance of infamous serial killer Jeffrey Dahmer. What began as a short story in a self-published comic anthology was eventually expanded into a full graphic novel with extensive annotations. The graphic novel is about as close to fact as a memoir can get, backing up its claims through Derf’s first-hand account, Dahmer’s confession and subsequent interviews, and news reports. MY FRIEND DAHMER does not dwell on the wild speculations, violence, or sexual deviancy that a lot of true crime media does. It’s not about Jeffrey Dahmer, the serial killer. It’s about Derf’s weird friend, Jeff.

Dahmer, the serial killer, was convicted of the murders of 15 men and boys in 1992. Although it’s not uncommon for serial killers to keep trophies of their victims, Dahmer stands apart due to the sheer amount of evidence that he saved. Police found human remains scattered throughout Dahmer’s apartment, from a frozen severed head to torsos dissolving in drums of acid. According to his confession, Dahmer dabbled in necrophilia, cannibalism, and even tried to lobotomize his victims to create a helpless zombie-like companion. It goes without saying that Jeffrey Dahmer’s infamy is not without justification.

Narratives about true crime are exceptionally apt at humanizing people who we might otherwise dismiss as miscreants. However, certain criminals evade this humanization due to the horrific nature of their crimes, particularly serial killers. The narratives of serial killers diverge from most other types of criminal cases. They focus on both the subject’s criminality and their life as a whole. These stories typically begin with the subject’s childhood, not to humanize them, but to imply that even as a child there was evidence of the killer’s inexplicable evil. Despite a lack of evidence, childhood behaviors such as bed-wetting, violence towards animals, and pyromania have been identified by some psychologists as sure evidence of a killer’s early psychopathy. If the horrific actions of serial killers are inevitable, there is nothing to glean from this discourse other than exploitative entertainment.

READ: Ready for more horror discourse? Read up on the genre’s best examples of social commentary!

Fortunately, this is where MY FRIEND DAHMER deviates from the expected serial killer narrative. Although the graphic novel covers Dahmer’s early years, it does so without an agenda of demonization. Derf portrays Dahmer as a three-dimensional character, as both a victim and an aggressor. As someone who knew Dahmer personally, Derf can talk about Dahmer’s story in the context of his own cruelty towards Dahmer and Dahmer’s cruelty towards others. As the narrative progresses, the title becomes charged with irony. It becomes apparent that Derf and Dahmer’s relationship was never really a friendship. Dahmer was always the willing butt of the joke, kept around by Derf and his friends for a laugh. 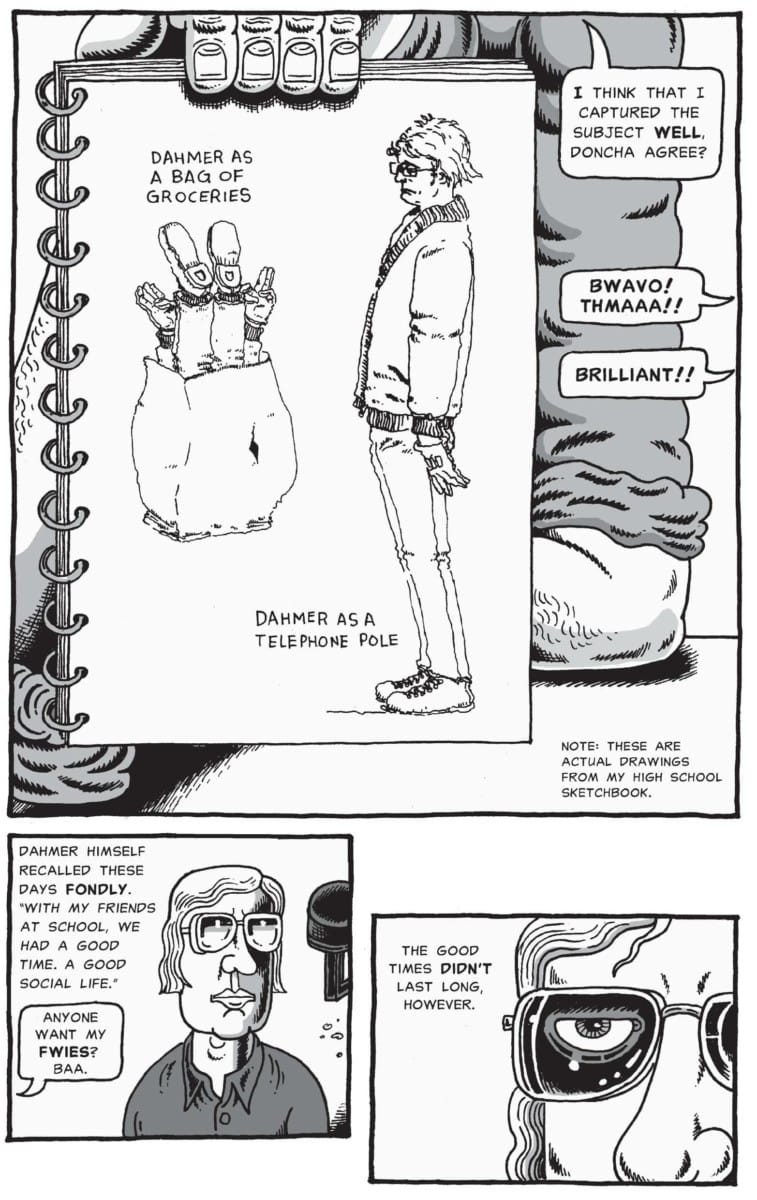 Retrospectively, Derf is admirable in his ability to straddle the line between sympathy and dissociation. Derf is always a friend from a distance. Even as a teenager, he could tell something about Dahmer was “creepy,” not just weird. Derf’s characterization of Dahmer presents a person who is equal parts tragic and malevolent. Dahmer is undoubtedly tormented but also lacks any compassion for others. MY FRIEND DAHMER successfully turns Jeffrey Dahmer into a person, but not necessarily a person we’re expected to like.

One of the ways Derf humanizes Dahmer is by directly comparing his friend’s adolescence to his own. Derf uses his own sexual frustration as a teenage boy to empathize with how Dahmer must have felt as a young man discovering he was gay. However, Derf is quick to draw the line between Dahmer being gay and being a sexual deviant. He points out that a lot of his classmates ended up coming out after high school. Derf is refusing to lump homosexuality in with sexual deviancy. He can both sympathize with Dahmer’s experience as a gay adolescent and condemn his violent fantasies. Although homosexuality may have contributed to Dahmer’s feelings of isolation and inability to make real connections with those around him, it did not force him to kill. Derf makes this point abundantly clear.

READ: Would you prefer your serial killers with a little more levity? Then NAILBITER is the perfect read!

Derf also compares his home life to that of Dahmer. Both had younger brothers and fathers who worked as chemists. Unlike Derf’s idyllic home life, Dahmer’s parents went through a drawn-out and turbulent divorce, and Dahmer’s mother was particularly unstable. There is a clear yet unspoken history of mental illness in Dahmer’s family that no one ever really works through. Despite their similarities, Dahmer’s family was not a source of support like Derf’s was. If his home had been a safe place, a place where mental illness had been discussed, would Dahmer’s life had turned out differently? Maybe. 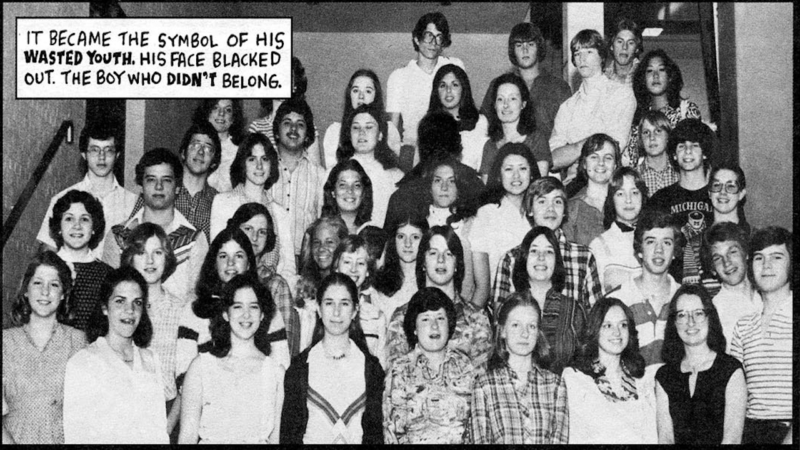 Despite exploring the factors that contributed to Dahmer’s social isolation, Derf is careful not identify a single factor as the cause of Jeffrey Dahmer’s evil. However, he also doesn’t fall into the trap of “inevitability” that plagues much of serial killer discourse. He spends less time questioning whether Dahmer could have been saved, and more time asking why no one even tried to help him.

According to Derf, Dahmer spent his time at school visibly intoxicated. He would arrive at school and stay late so that he could drink somewhere where his parents wouldn’t catch him. He wouldn’t even go to class, just lurk around the school grounds drunk. Even as a teenage boy, Derf could tell Dahmer’s alcoholism was not average high school partying. Looking back, it’s baffling that not a single adult ever caught on to how troubled Dahmer was. Derf pulls an actual quote from their school’s counselor who claims there was not a single indicator that Dahmer was abnormal. Clearly, as Derf points out, there was. The school’s faculty, or any adult for that matter, was not paying attention.

READ: Are you a true crime fanatic? Here’s an article on three more serial killers!

Ultimately, Dahmer is not a tragic figure because Derf knew him to be a nice person. Dahmer is a tragic figure because the system seemingly failed him at every single step. Maybe Jeffrey Dahmer was always a bad guy. That does not excuse the failure of his family, his school, and his classmates to intervene in someone’s life who was so clearly veering out of control. MY FRIEND DAHMER holds Jeffrey Dahmer wholly accountable for his actions. However, the narrative also questions whether Dahmer could have, or should have, been stopped.

Derf’s first-hand account cuts through the horrifying facts of the case to discuss how Dahmer is ultimately a product of society’s failures, regardless of the evil that may or may not have always been lurking inside of him. In MY FRIEND DAHMER, Derf desperately tries to relate to a friend that he never really knew, forcing him to come face to face with his own cruelty and negligence. As readers, MY FRIEND DAHMER forces us to confront our failings alongside the author’s. By extending sympathy to the most heinous of criminals, the graphic novel successfully confronts its audience with the reality that cruelty, small or large, is not anomalous.