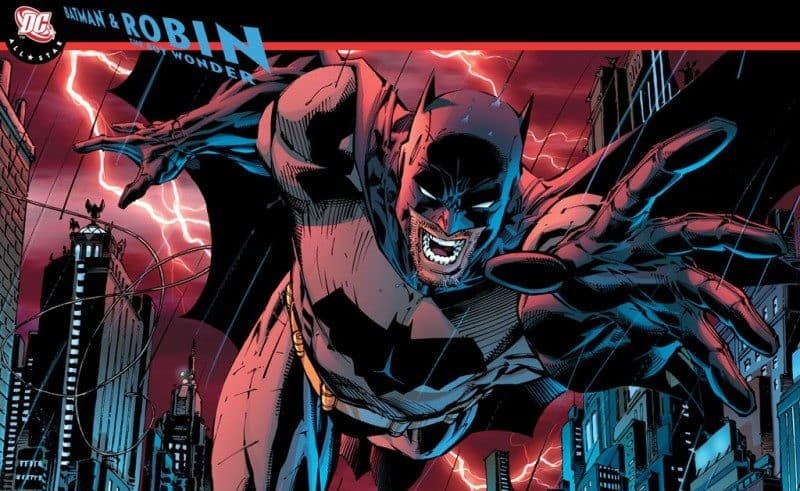 In the first entry in this trilogy of articles focusing on Frank Miller’s Batman, my coworker, Glenn, expressed a little bit of dismay at having to kick off the trilogy with such an important and historic title.  It’s true, the pressure was on, but he performed admirably in his analysis and recap of the importance of that foray into the Dark Knight’s origins.  It’s a great book- a classic- and for good reason.  It brought a whole new edge and grittiness to the character, and approached him and Gordon in a more realistic and human light than most prior representations.  Simply put, YEAR ONE is the definitive Batman origin, and reboots that have occurred since then have done nothing to erase the impact that the book had.  It’s fantastic.

On the other hand, Frank Miller’s other attempts at telling us his take on Batman’s early career, ALL-STAR BATMAN & ROBIN, was not nearly as well received.  It is the most recent Frank Miller Batman story to date, following YEAR ONE, THE DARK KNIGHT RETURNS, and THE DARK KNIGHT STRIKES AGAIN; a third chapter in THE DARK KNIGHT series will be released soon.  When ALL-STAR was announced, people went crazy.  My brother, a person who doesn’t read comic books, went out of his way to buy the issues, due to the reputation of Frank Miller.  It didn’t hurt that Grant Morrison’s ALL-STAR SUPERMAN was a huge seller, and still maintains its reputation as one of the best Superman stories ever.  With such a big name writer following on the heels of a popular series with an even more popular character, this series was set to be one of the best Batman stories ever told. 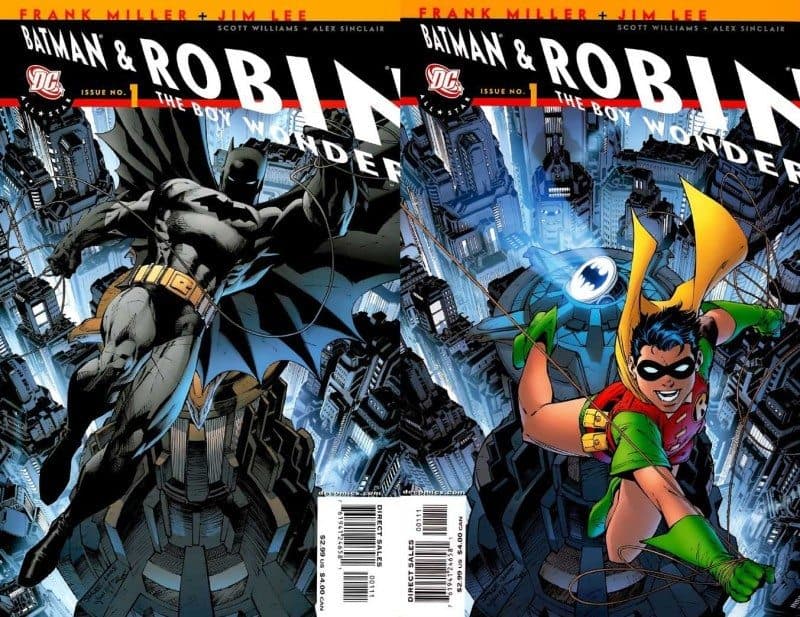 Boy, were we let down.

The series turned out to be anything but a classic, and was suspended after the 10th issue.  Rumors abounded about a supposed follow-up, but this never saw the light of day.

Let me say, first and foremost, that Jim Lee’s art was spectacular.  He does what he’s known for- it’s the reason that his was DC’s house style for a long time.  He did some great visual work with Frank Miller’s script, and really made some of the scenes come alive.  Batman truly jumped out of the page at times, and there are some world-defining images- the batmobile, the batcave- that are something else.

The biggest problem with this book is, to me, the complete lack of plot.  Each issue seems vaguely connected to the previous issue, but there’s no singular plotline being followed.  The other members of the DC Universe are mad at Batman for kidnapping Dick Grayson in the aftermath of his parents’ murder.  The Joker was responsible for having Dick’s parents get killed.  Black Canary and Catwoman both want to have sex with Batman.

Sorry.  Black Canary and Catwoman both want to have sex with the Goddamn Batman. 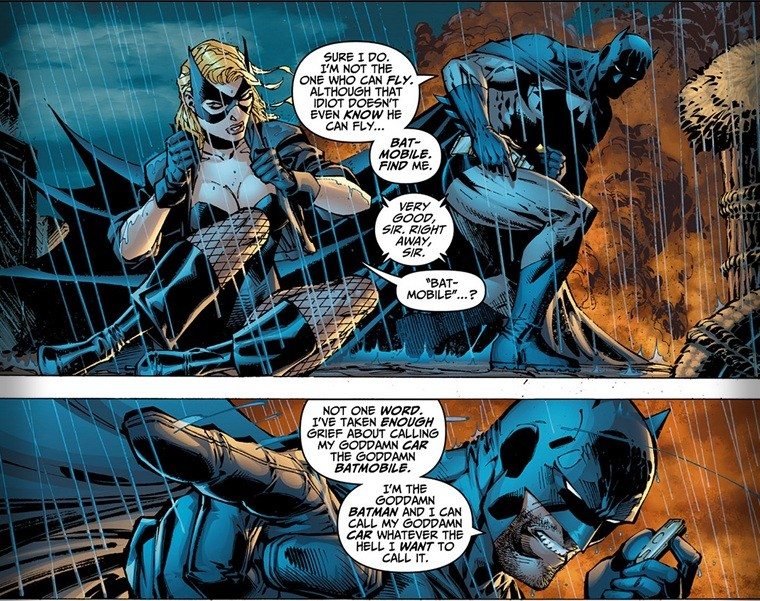 This is as close as The Goddamn Batman gets to pillow-talk.

Frank Miller must have been really pushing hard to get to curse in his comics.  Almost every issue ends with the phrase “the goddamn Batman” being said by some character. This pinpoints another problem with the book.  Every character has Frank Miller’s voice.  Whether it’s Joker, Catwoman, Batman, Robin, Alfred, Gordon… everyone sounds like they would fit better in SIN CITY, Frank Miller’s iconic series.  This leads to a weird lack of characterization.  I found it difficult to believe most of the characters, but the female characters presented an even bigger issue than believability: blatant sexism.

The first female we meet is Vicki Vale, who just can’t stop blabbing about how sexy Bruce Wayne is while she stands in her apartment in her underwear.  It should be noted that the blabbing she is doing is actually dictating her next article.  Black Canary, like many of Frank Miller’s female characters, starts out with a rather sexist career in some rather racy clothing- she’s a waitress of some sort, but it appears that she works in a strip club.  Glenn talked about his issues with Catwoman being portrayed as a prostitute in YEAR ONE, and the same issues plague this story.

“No guys, this is what it looks like when a journalist is working.”

It seems that Frank Miller confuses “strong female characters” with “females that are very comfortable with sex”.  Honestly, that’s the only motivation that any female in this story has- Black Canary is in love with Batman and wants to have sex with him.  Catwoman is in love with Batman and has had sex with him numerous times.  Joker has sex with a woman, and then immediately kills her- I guess women are just dying to have sex with Joker.  The strongest female we see is actually Vicki Vale, because she’s the only one who is chasing Batman for having kidnapped Robin- everyone else is seeking the attention of a man.

READ about five film roles that will get you excited for Jared Leto’s Joker!

The goddamn Batman has developed a bit from his first excursions in YEAR ONE.  This Batman is more determined, more confident, and more in control.  He is sexually aggressive in a way that is atypical from his previous representations.  He is also a bit more of a wild card- acting crazy, kidnapping children.  Indeed, Miller has twisted the Dick Grayson/Robin origin story- where in the past, it was Tony Zucco who shoot out the wires during a Flying Graysons performance, it is now Joker who hires an assassin to put a bullet in the heads of Dick’s parents while they’re taking their final bows.  Miller’s portrayal shows a Robin who is in a state of psychological shock in the aftermath of this, and Batman has to force his hand years earlier than he would like.

READ all about that Joker’s love for Batman!

Batman has apparently been keeping his eyes on Robin, expecting to eventually train him to be a replacement.  Instead, he has to resort to kidnapping the child.  Ultimately, this is the primary source of conflict in the story, setting up for a few confrontations with members of the eventual Justice League- particularly the Green Lantern.  Superman, Wonder Woman, and Plastic Man are also present, but Green Lantern has the most important scene.  In a room decorated in yellow (a color that the Green Lantern Ring cannot affect), with Batman continually offering Hal Jordan a glass of lemonade, we see that Batman’s exhibited craziness has pushed Robin to a skewed view of Batman’s mission.  Robin insists that he is not Dick Grayson, which helps to protect Batman from the likes of Superman and Wonder Woman, but his training has led him to a more lethal form of battle, and he nearly kills Hal Jordan.  This is the thing that brings Batman to the brink- he realizes that his tactics are not working. 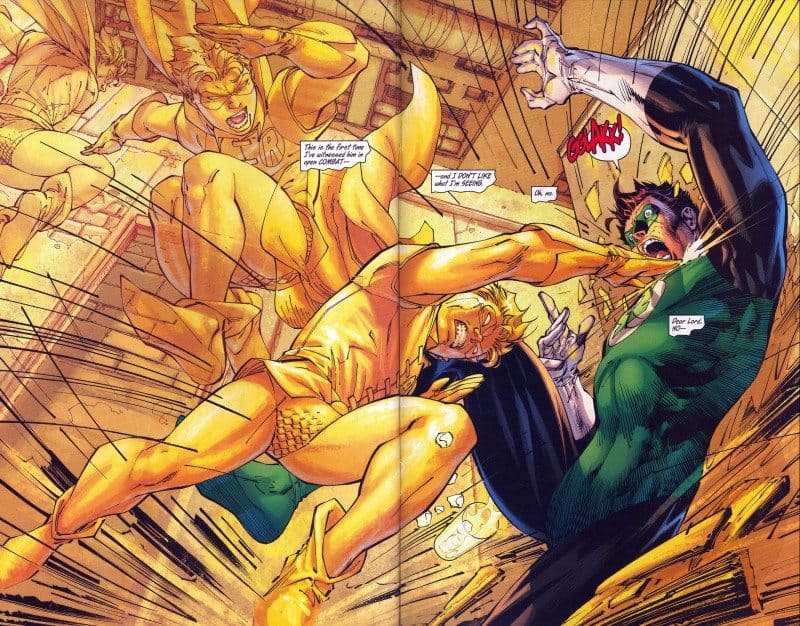 This was probably the most interesting aspect of Miller’s redesign.  In the past, Bruce has been represented as an almost perfect father, despite spending most of his life without a father figure, and having no prior experience.  It’s difficult enough to be a parent; I’d imagine it’s even tougher to raise and train a sidekick.  This issue is examined by Miller in this book, and that’s what should really be taken away.  Batman is not a fit parent.  He’s very much figuring things out.  It’s easy to see how he would find difficulty in training his young ward.  It also helps explain why he has even worse luck with Jason Todd- if Dick didn’t have a fun and happy personality, he would have crossed the line completely.

That this is Batman’s first attempt at gaining a sidekick may offer some explanation as to why his methods on indoctrinating Dick seem to border on brainwashing.  He uses fear tactics to try to bring Robin to his side.  Well, fear, and a sort of show akin to a child playing at “show and tell”.  He promptly shows off all of his gadgets (such as a batmobile that is also a batplane and a batsub) and his batcave.  It’s hard to say what really entices Robin into aiding Batman.  It isn’t merely revenge- Robin restrains himself from causing his parents’ killer too much pain.  It turns out that Joker was behind everything.

As far as redesigning Robin goes, Frank Miller offers what I find to be the best explanation for Dick’s superhero name being “Robin”.   DARK VICTORY offers that his mother used to call him “Robin” because he was “always bobbin’ along”.  Instead of this, Frank Miller has Robin put on a hood and grab a bow and arrow.  He wants to be called “The Hood” after “Robin Hood”.  This might sound very familiar to fans of the TV show ARROW.

Batman, however, pulls the hood down over Robin’s face, proving how unfit a hood can be for a combat situation.  Given the issues with capes that were outlined in WATCHMEN, or the fact that Green Arrow has operated with a  hood, it seems like Batman’s being pretty nitpicky, but regardless, he vetoes the hood and tells Dick that his name will be Robin.  This gives Robin a little more dimension in this universe- he is good at archery in addition to his acrobatic skills.  He also, if his moniker is to be taken as any indication, is the type who will fight for the little guy, which makes a lot of sense.  As the newcomer to the superhero game, he is an underdog.  He is still training, and he is physically smaller than just about everyone he’ll be fighting. 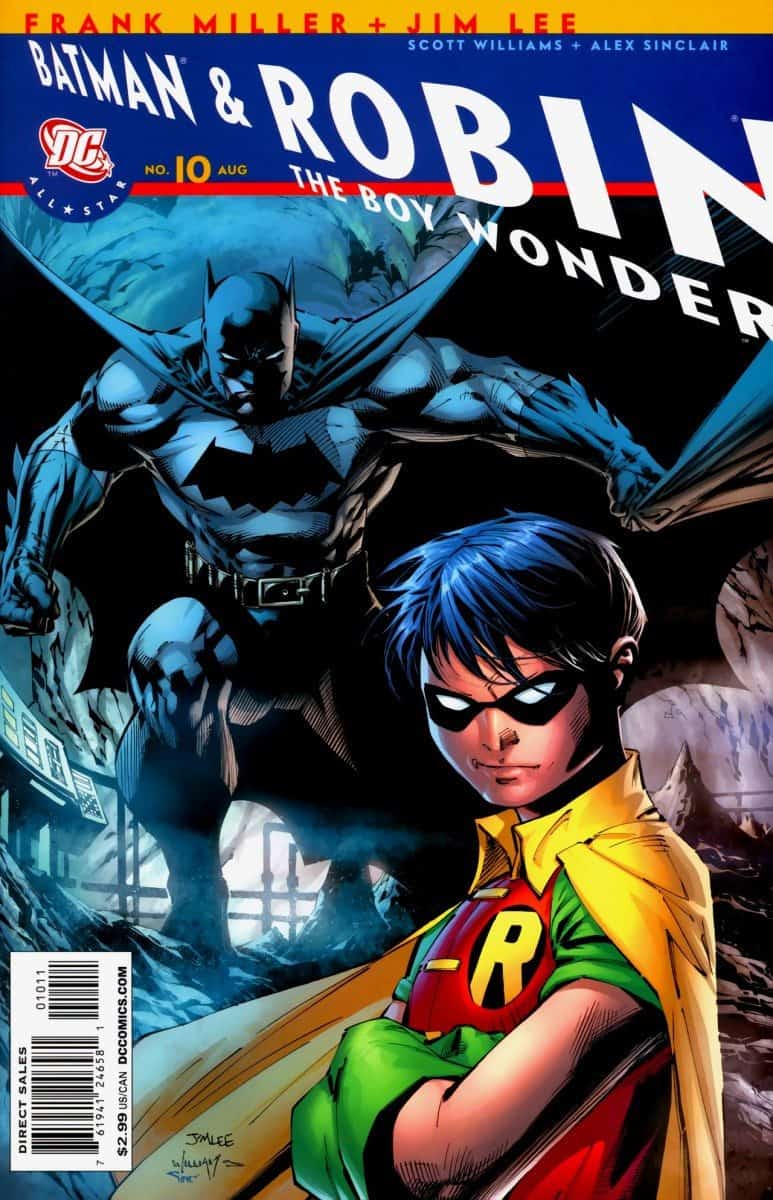 Really, this is Robin’s book.  It makes sense as a fitting second chapter for Frank Miller.  This is the next  major event in the Batman timeline, and we get to see a lot of this new character.  Batman, by this point, is stubborn and shut off from the world.  He’s, honestly, kind of an asshole, and not very likeable.  Robin helps to bring him out of his shell.   This is one thing Miller does well- Batman’s conversations with Robin eventually loosen up, and when the two of them are talking to Green Lantern, they are in their element, and are really playing with Hal.  To see the slow change in their relationship is possibly the most rewarding part of this story.

As I said before, there isn’t an overarching plot.  The series was put on hold after 10 issues, and hasn’t been revisited since.  There was an announcement that Dick Grayson: Boy Wonder was to be a series that followed this one, but that project hasn’t seen the light of day since the announcement, and now Miller is working on the third DARK KNIGHT book, so it’s likely that we will never see Frank Miller’s ideas of where Robin were going. 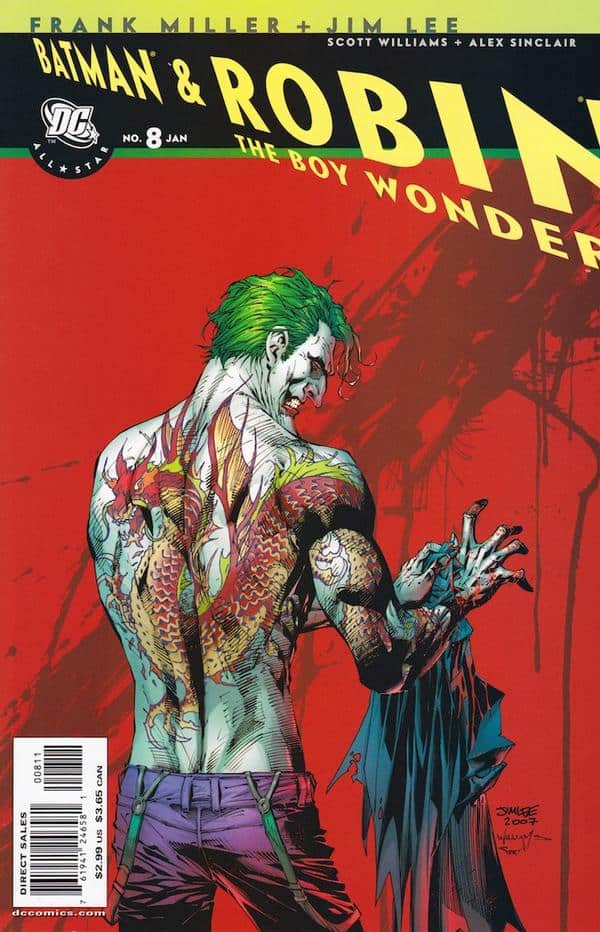 Tattoos… it was going somewhere with tattoos…

Though this book is not accepted as part of the overall canon, it is confirmed to be a part of Frank Miller’s Batman universe, tying YEAR ONE to THE DARK KNIGHT RETURNS.  As such, keep Batman’s relationships in mind when you’re reading through TDKR.  It will definitely help influence the way that you view Superman, Catwoman, and Dick Grayson.

Unless you’re a huge Frank Miller fan, or a Batman fan who loves the alternate universe stories (BATMAN: ODYSSEY being a prime example), you can give this one a pass.  You won’t be missing any huge events for the canon, and there are better Robin origin stories out there (See DARK VICTORY or BATGIRL/ROBIN YEAR ONE).  However, if you’ve ever wondered what it would be like if Batman was protecting Sin City instead of Gotham, then this is the book for you.

Stay tuned- next week we’ll be wrapping up our Frank Miller trilogy with THE DARK KNIGHT RETURNS!