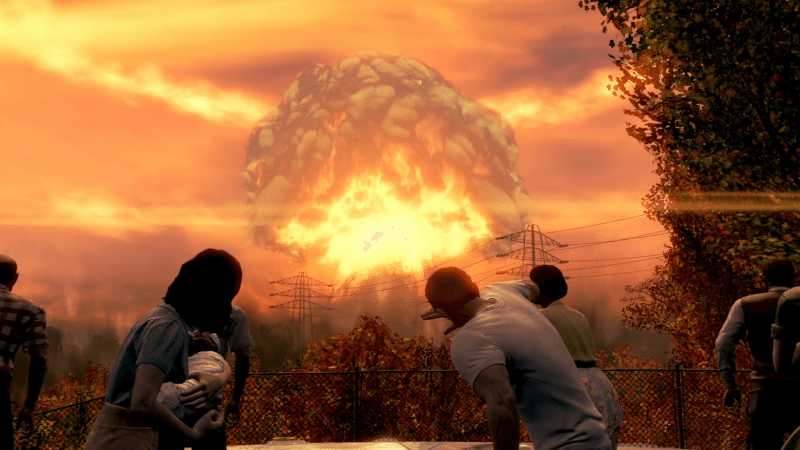 I’ve been thinking a lot about franchise revivals lately.

Revivals are video game and movie franchises that come back after a long hiatus, or are passed on to another developer or director. Unlike a reboot, which “resets” the chronology of a series entirely, a revival picks up where its predecessor left off. As such, consistency in tone, lore, and atmosphere are even more important to revivals than they are to reboots.

Be it in film, television, or video games, everyone is trying to cash in on a nostalgic idea. As a result, reboots and revivals are all the rage right now. But there seem to be just as many examples of revivals that are successful…

…As those that aren’t.

And I want to figure out why.

So, because I’m a nerd who loves to over-analyze things, I decided to take a look at the FALLOUT series, a perfect example of a successful yet imperfect revival. While clearly a financial and critical success, there are inconsistencies in tone, story, and design philosophy that are becoming more egregious as the series goes on. I think it’s worth examining this series and comparing it to others like STAR WARS and INDIANA JONES to try to get to the bottom of what goes right, and what goes wrong when you’re bringing a series back from the dead.

READ: Love FALLOUT? Check out our thoughts on why UNCHARTED is still so amazing nearly a decade later!

So what does the FALLOUT series teach us about revivals and how does it compare to others? Are revivals worth it? Why are they so hard to do right? Is there a surefire way to make a good one?

FALLOUT is a long-running series of sci-fi role-playing games taking place in a future told by the 50’s. It’s known for its blend of comedy and drama, gratuitous violence, engaging narratives, and retro-futuristic setting. Perhaps its strongest asset is its unique, sometimes goofy, yet painstakingly detailed atmosphere.

However, after playing FALLOUT 4, the latest installment, I began to notice something a bit “off” with its portrayal of the world. I found myself asking questions like, why, 200 years after the apocalypse, is everything still a wasteland? Why are people still living in ruins?

200 years is the difference between 1816 and 2016. Of course a nuclear holocaust would slow down progress, but why has society stagnated to this degree?

I then realized that this is a new problem in the FALLOUT series. The first two games, made by the original developer “Interplay,” only take place a generation or so after the apocalypse, so the design choices are more easily justified. Even the atmosphere in FALLOUT 3, Bethesda’s first foray into the series, can be justified when you realize Washington is infested with mutants and the area took the brunt of the nuclear bombardment.

But with the fourth installment in the series, it’s starting to get a little silly. In 200 years, no one in Boston has made a serious attempt to start rebuilding civilization. You can explain this if you suspend your disbelief, but it’s clear that Bethesda isn’t interested in moving the world forward.

On the surface, this makes sense. Revivals need to “stay true” to the original atmosphere, but when does faithfulness become stagnation? Is keeping things the same “staying true” to FALLOUT in the first place?

I would say no.

As much as I love Bethesda’s FALLOUT games, I don’t think they really “get” the FALLOUT world at its core, They’re missing a major component of the classic games and it’s absence has become more noticeable as the series goes on.

CLICK here to find out 5 ways to make CALL OF DUTY: INFINITE WARFARE the series it once was!

This simple difference lies at the core of Bethesda’s misunderstanding.

The post-apocalypse focuses on the anarchy, confusion, and collapse of society after a disaster. FALLOUT is about what comes after. Vegetation and forests are slowly growing back, tribal cultures are returning to the modern era, and fragments of the old world are violently dying off and struggling to stay relevant. FALLOUT  is about change and awkward progress in an unkind world. This core philosophy is what makes FALLOUT what it is. It’s what sets it above the ocean of generic zombie-apocalypse games. It’s almost as important as its retro-futuristic style.

Look at the massive difference in California between FALLOUT 1 and 2. Look at New Vegas (a spin-off created by former Interplay devs), where fully modernized nations are fighting over electricity, where the world is still wild and untamed in the wilderness, but modern civilization has returned in full force.

Each FALLOUT game was supposed to be another step forward, another grand leap into the future of mankind, a look at how we’d change, and how we’d stay the same.

HYPED for OVERWATCH? Check out our character spotlight on Hanzo!

I can’t really blame Bethesda, however. There’s a very tricky balance to be had when you’re continuing a franchise that wasn’t originally yours. Consumers are always very skeptical when this happens, and fear that the new version won’t maintain the spirit of the old. This is a legitimate fear, and I understand why creators and consumers alike are so hesitant to revive a beloved series.

STAR WARS: THE FORCE AWAKENS is a great example of this. I’m an obsessive Star Wars fan, and I loved the movie, but I wholeheartedly admit the basic plot was re-hashed from A NEW HOPE.

However, there was a good reason for this.

When you have a franchise that’s so powerful, that so defines American mythology, that’s so essential to our culture, there’s a million ways to get it wrong, and only a few ways to get it right.

Imagine if FALLOUT had gone in the opposite direction, advancing things too much, changing the entire dynamic of the world within the span of a single game. Fans would flip out that their beloved franchise was suddenly unrecognizable.

If you change too much, you risk losing your identity, but if you don’t change at all, you’ll stagnate into irrelevancy. Why watch that new movie or play that new game if it’s exactly the same as the old ones? It’s difficult to find that perfect balance, both when you’re continuing someone else’s work, or even when working on a project of your own.

Take INDIANA JONES AND THE CRYSTAL SKULL for example. That revival was doomed from the start. INDIANA JONES is a series that’s defined by the decade in which it was made. We love it because it’s campy, because it’s unrealistic, because it’s silly. If they had tried to update CRYSTAL SKULL too much, if they had made it more gritty and serious and grounded, die-hard fans would riot. And, to an extent, they’d have a right to. This isn’t the series they grew up with. This isn’t what they paid to see. It would be like playing a FALLOUT game with a modern soundtrack, or getting rid of the pseudoscience and Monty Python references.

On the other hand, if they had kept it exactly the same, if they refused to throw in any new ideas, the movie would feel re-hashed and dated. Critics would be calling INDIANA JONES a dead franchise, something that should’ve stayed in the ’80s. Bethesda could have done the same thing with FALLOUT, keeping it a turn-based isometric RPG with a clunky interface and creepy talking heads.

What CRYSTAL SKULL  gave us in the end was a film that tried to strike a balance, but a lot of people would say it was the wrong balance. They kept the movie silly and campy, while trying to update it with science fiction elements that are a bit more grounded than the fantasy overtones for which the series is known. Instead of pleasing everyone, they ended up pleasing no one. Newcomers ridiculed the nuking the fridge scene, and hard-core fans rioted over the inclusion of aliens. It could be said that FALLOUT went this route, creating something that, while financially successful, has never quite lived up to the dream of the original.

It’s a tricky situation without a lot of right answers.

When you’re reviving a franchise you need to do everything perfectly, or don’t anything at all, which may be the reason JJ Abrams decided to use a recycled plot for STAR WARS. Maybe he’ll fall into the Bethesda trap eventually, but for now he made a safe choice that allowed him to ease us into this new phase of the franchise, while still providing a solid film. It didn’t take many chances or risks, but it didn’t need to yet.

FALLOUT, on the other hand, has had three installments since its revival. There’s a balance to be had between staying faithful to the original source material, and moving a series forward, and Bethesda clearly hasn’t found it.

Read our article on DAREDEVIL for a look at Marvel’s take on reboots.

I’m one of those people that loves to see a series continue. I love to see the worlds that are slowly created around a continuing franchise, but it’s so easy for a series to stagnate, or change so much that it loses what originally made it great.

So what’s the solution?

Well, there really isn’t one. There’s no one right answer. There’s no perfect formula for reviving a franchise. As creators, we need to take it on a case by case basis, we need to truly immerse ourselves in the projects we’re working on if we want them to stay faithful to their original vision, while giving them space to grow beyond it.

But hey, that’s just my opinion!

So what do you think makes a good revival, or reboot? How much should a series change when it returns? How much should stay the same? What are some of your favorite or least favorite video game revivals and why? Is there a series you’d like to see revived? Tell us how you’d do it!