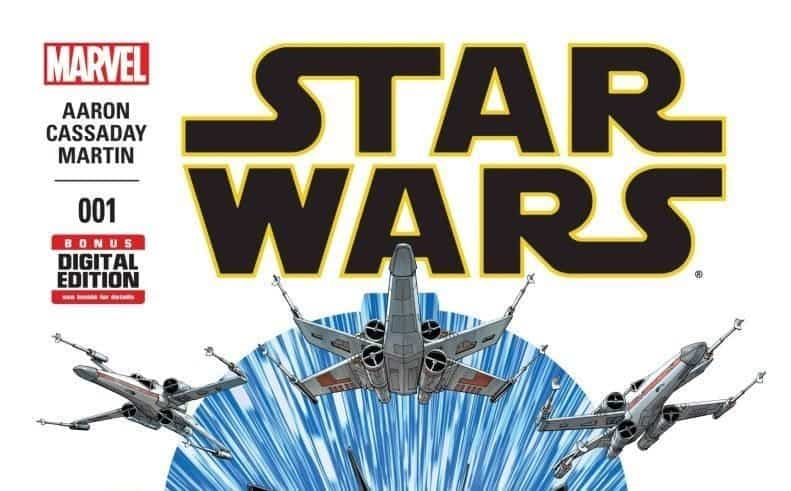 It is a period of civil unrest. “Star Wars”, a multimedia franchise with decades of history in the comic book industry, has changed homes from Dark Horse to Marvel Comics, where the first “Star Wars” comics were published in 1977. In the ensuing confusion, Marvel’s parent company Disney—also owners of the “Star Wars” brand—have effectively erased all of “Star Wars”‘ expanded universe continuity in favor of a blank slate approach. With the seventh film in the epic saga nearing release, Marvel has begun publishing a new line of comic books and building a fresh continuity set within one of film’s most successful and respected franchises.

In the hands of writer Jason Aaron (THOR, SOUTHERN BASTARDS) and artist John Cassaday (ASTONISHING X-MEN, PLANETARY), the flagship title of this new initiative gets things started on the right foot. Simply titled STAR WARS, the book is set between the events of Episode IV and Episode V, an era of “Star Wars” continuity ripe for exploring. And this is just what Aaron and Cassaday have set out to do, delivering a six-issue arc following the heroes of the Original Trilogy: Luke, Leia, Han, Chewbacca, R2-D2 and C-3PO. Of course, the classic villains are just as prominent, with Darth Vader’s menacing presence reaching new heights of awesome. Even fan-favorite bounty hunter Boba Fett has a big part to play.

Emboldened by the destruction of the Death Star, our Rebel heroes set out on their next move: destroying a major Imperial weapons depot. This course of action sets in  motion a chain of events that sees Luke come face-to-face with Darth Vader and later hunted down by Boba Fett on Tatooine. Even though Luke manages to escape the bounty hunter, Fett is able to confirm Luke’s identity as a Skywalker to Vader, a truly monumental moment in Star Wars canon. But if that wasn’t enough of a surprise, by #6 we’re introduced to a new character: Sana Solo, Han’s wife.

It would be fair to say the book is all about fan service. From the classic setting and characters to the high-profile creators, STAR WARS is all about giving long-time fans timeless experiences in that far away galaxy. This effort is made clear first and foremost with Cassaday’s excellent renderings of the heroes, ships, locations and weapons that fans have grown so familiar with over the decades. If there has ever been a “Star Wars” comic that looks more like the films I am unaware of it. That isn’t to say the art is without flaws. Facial expressions are sometimes lacking in likeness, and Vader’s mask often looks just a little cartoonish. These are small beans, however, considering the overall quality of the work done by Cassaday. One might say the flaws are in fact a good sign that he is actually drawing the characters instead of tracing stills of the film’s actors as some artists may be tempted to do. 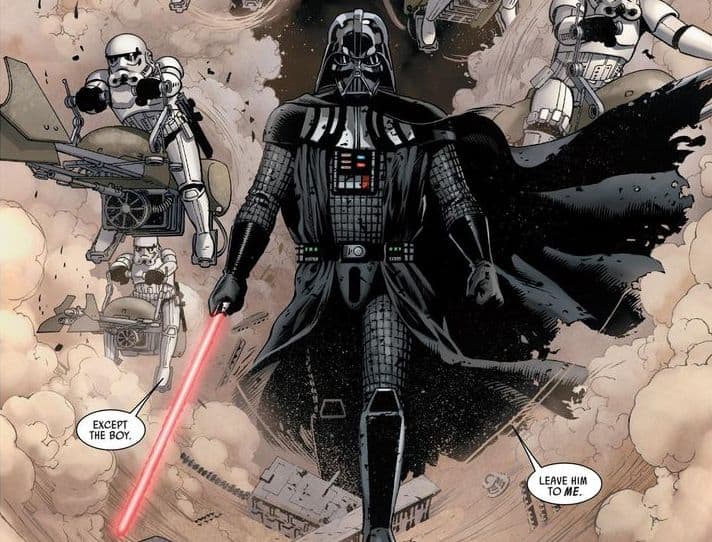 Not only does STAR WARS looks like the movies it represents, it reads like them as well. Jason Aaron has clearly done his homework and taken great strides to ensure the book’s tone and characters feel authentic. This is especially true in the case of Han Solo and his banter with Leia. Developing writers may want to take note of Aaron’s ability to establish and maintain the individuality of each character’s voice. The effect is like hearing the movies in your head as you read, a highly commendable feat which is sure to evoke a great deal of nostalgia among longtime fans of the franchise.

Then comes the icing on this already delicious comic book cake. (Note to self: don’t write while hungry.) Marvel, in their infinite wisdom, opted to slap a T+ rating on their “Star Wars” books, so each title is allowed to utilize some of the edgier aspects of the recent films and video games. This approach has paved the way for scenes of Darth Vader using Stormtroopers as human shields and using the Force to break the necks of underlings. While I can’t speak for how effectively the T+ is put to use in other titles, STAR WARS bridges the gap between the Original and Prequel Trilogies in terms of content, making for more intense action and more menacing villainy. I believe these facets demonstrate Marvel’s ample ability to create classic “Star Wars” material while providing new insights and plenty of surprises, making this book one of the more exciting publications in Marvel’s already impressive roster and a worthwhile addition to the Star Wars universe.

The Force is strong with this one.