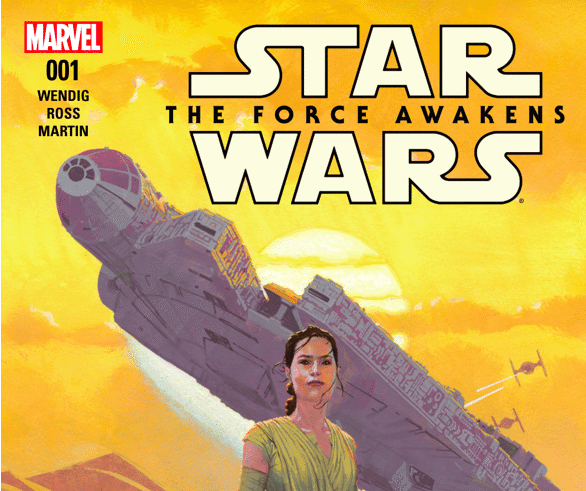 Reading Marvel’s official comic adaptation of THE FORCE AWAKENS by Chuck Wendig and artist Luke Ross is like hearing your mom describe to you the events of the movie in excruciatingly scattered detail six months after you first saw it. It’s all over the place, paints some very unclear pictures, and, ultimately, feels useless. Everyone would be better off just watching the movie with subtitles on.

READ: Our ranking of every STAR WARS comic Marvel has put out so far!

The comic details the first act of the film. Nothing more, nothing less. Yes, this is absolutely what it was billed as. It is an adaptation of something we have already seen. However, unlike the official novelization, it doesn’t offer anything more. The novel allowed us to get within character’s heads, to see more in-depth emotions, and revealed small tidbits of information about the new state of the universe. This comic does none of that. It even feels like it takes away the best parts of the film for its lightning-quick pace. 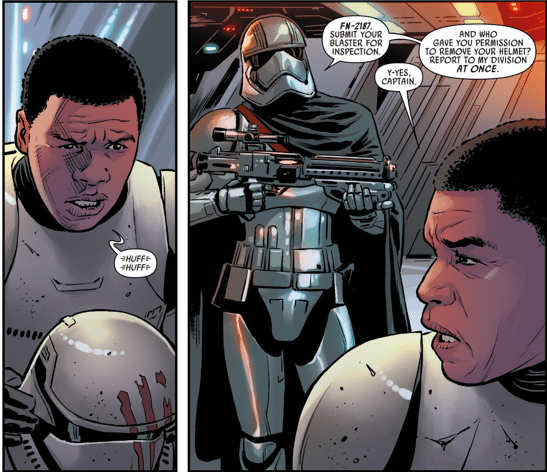 Chuck Wendig brings summarization to a story that only works when its characters get time to shine. Thanks to a tendency to blow through key scenes that developed the characters, this comic really highlights the film’s NEW HOPE comparisons. This was one of the biggest complaints about the film, and it feels justified in this book. The characters of Rey, Finn, and Kylo Ren are some of the best in the STAR WARS canon, and if a reader hadn’t seen the film before reading this, it would feel overcrowded and impossible to attach to any of them. The film’s complex characters become paper-thin and underused in this book.

The action scenes are given more attention, even if they feel a little rushed. It’s hard to imagine a FORCE AWAKENS adaptation that doesn’t span ten issues. It’s hard to imagine any film of this length condensed to just a few issues. That being said, this comic moves so fast that readers should strap on some seat belts before opening to the first page in order to prevent whiplash. It’s nice to see Marvel giving attention to the latest film, but it often feels rushed and careless. 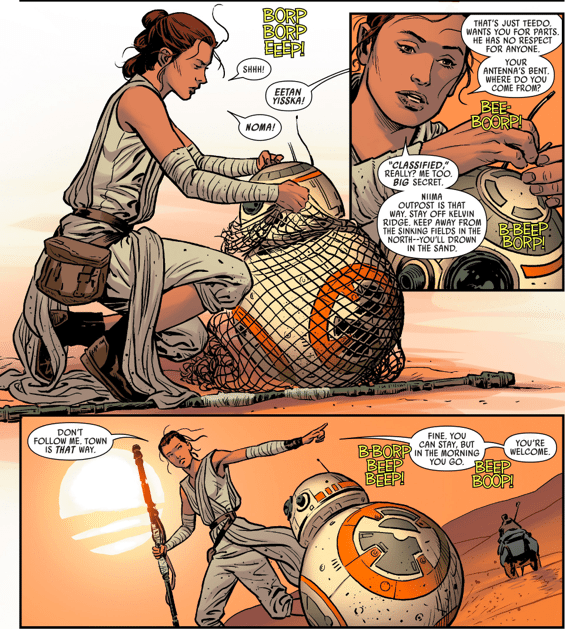 The artwork from Luke Ross is decent, at best. The characters don’t often stand out. Most of the time they look like cardboard cut outs from the back of cereal boxes trying to re-enact a scene on a child’s bedroom shelf. There are a few pretty panels, the action scenes being a prime example, but it’s not enough to raise the book out of mediocrity. Perhaps a slower pace would’ve allowed for more time to make the characters look more human-like, but that is not possible now. It’s not bad overall, but when compared to the other STAR WARS comics Marvel releases, it doesn’t even compare.

READ: Our review of the film version of STAR WARS: THE FORCE AWAKENS!

It feels unfair to give a poor review to a book that probably wasn’t meant to be amazing in the first place. Adapting a hit movie like STAR WARS is most likely an extremely difficult task. However, after reading its first issue, it feels pointless. If it can’t capture the magical charm of the characters and setting that the film had, why read it? Unless you’ve never seen FORCE AWAKENS and have no idea who these characters are or what they’re capable of, you’re better off saving your money.