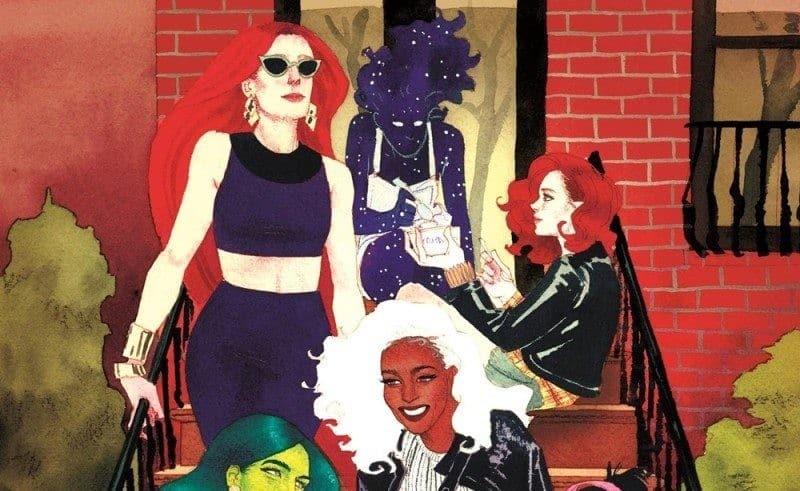 A-FORCE #3 is here and with it comes a greater understanding of the portals and Doom and all of that stuff we have come to love about the event that is SECRET WARS (sarcasm).

But before I get into all of that nonsense let us begin with the beginning of the third issue where She-Hulk has been transported to desolate Manhattan and is attacked by sentinels and the Thor Corps. As the battle begins, however, she is pulled back into a portal, which makes it clear to her that the portals are coming from her world and are being created by a traitor – I don’t really know how she made this mental leap, but I guess I’ll let it slide. Anyway, basically She-Hulk becomes a traitor to the state by trying to investigate this lead and begins to lead some form of rebellion. 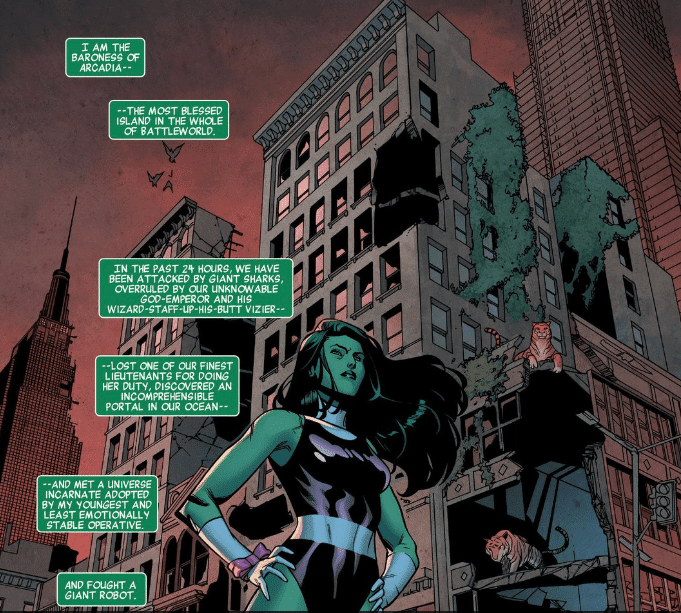 I know that I’m being snarky, but that’s not necessarily because this is a bad comic. It’s just that  I expect more from this team. I have read great stories that are extremely funny and have an entertaining mystery that comes to light in a rewarding way from Marguerite Bennett – I felt that way about the first issue – but something is just not quite right here. I honestly think that the main reason I feel this way about some of the Secret Wars tie-ins is because character beats and development are getting sidelined by the overarching plot that unites all of the issues. That is not good because when this happens I don’t care about the characters or what happens to them because I don’t have any real points of connection with them.

READ: FOLLOWING THE STAR WARS COMICS? FIND OUT WHY ONE OF OUR WRITERS IS DONE WITH THE SERIES!

There is a silver lining to all of this though! I promise! During the first issue I was frustrated because A-FORCE was largely sold as this awesome feminist paradise where men still existed, but women just became the leaders of the world; however, their villain and opposing force was Doom and Doctor Strange. I was all prepared for this all-female, all-the-time comic and then there is a male villain. Color me unhappy, but this issue fixed that by just taking members of the Thors Corps that were female and putting them in opposition to She-Hulk and A-Force. That is awesome in my opinion because a large part of feminist portrayals of women is an understanding that women are complex and can have varying degrees of goodness and badness. It sounds obvious, but it’s kind of shocking the amount of times I watch movies nowadays with a strong female character that is called such because she is pretty AND she can shoot a gun. I know I’m difficult, but I would like a little more character development, please! 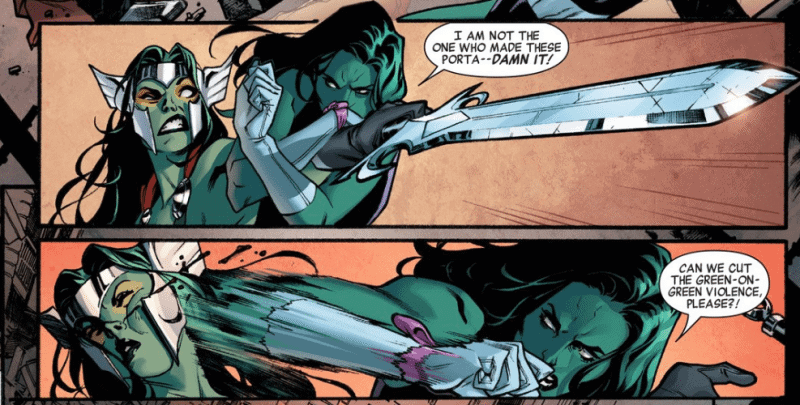 LISTEN: WANNA LISTEN TO FEMINIST ANALYSIS? CHECK OUT OUR PODCAST ON KELLY SUE DECCONICK’S BITCH PLANET! ALL THE COOL NC’S ARE DOING IT!

However, outside of adding some female villains, this issue didn’t leave me a lot to look at deeply or analytically. What have I learned this issue that is truly new about where any of the characters are emotionally? Sister Grimm is still sad. Dazzler is still not being used enough within the story. She-Hulk is breaking away from being the Baroness of Arcadia is something, but it doesn’t really change anything about the team dynamic. She also doesn’t lose anything necessarily. She’s basically just losing a title that didn’t mean much to me anyway because it’s importance to her or the world was never established previously. Actually, I just told a lie. She loses someone (GASP), but that leads to another problem. Her dynamic with this person was never really focused on before so of course any death is impactful, but I would have liked there to be a stronger sense of camaraderie and loss that wasn’t established on literally the page before the death occurs. It’s odd, but I think in some ways the very strong first issue this comic had, much like AMAZING SPIDER-MAN: RENW YOUR VOWS, has made it very hard for any of the other comics to reach that level again. Also the reveal of the traitor seems kind of obvious. SPOILER ALERT, I’m gonna make a prediction and say that obviously the traitor is Loki. Cause Loki. Duh. 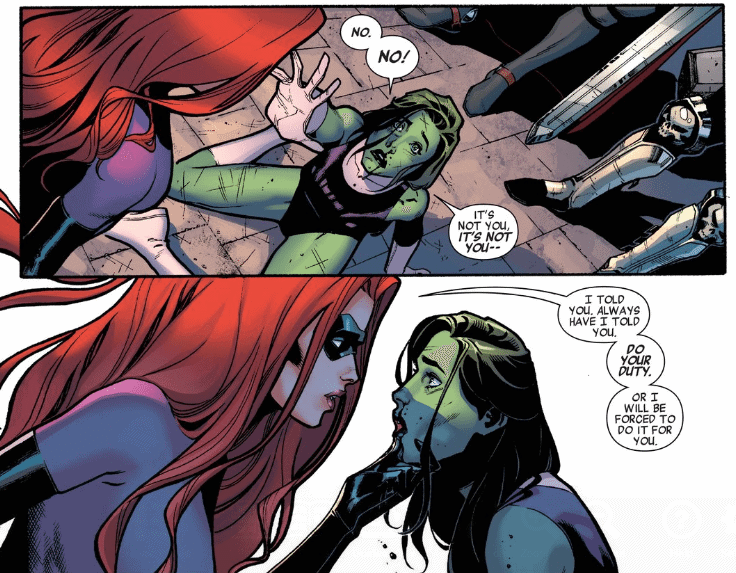 READ: SPEAKING OF SECRET WARS, A NEW ISSUE CAME OUT! IT WAS… INTERESTING! CHECK OUT OUR REVIEW!

SIDE NOTE: The variant cover that I have used as the featured image for this review actually makes this entire issue that is not perfect totally worth it because I could stare at that awesome art all day. Actually a large note in general is that the art in all of the issues so far including this one is consistently gorgeous. It is an excellent blend of feminine curves with strength, and the hair looks absolutely amazing at all times, which is important since Medusa was so heavily featured in this issue. In addition, I think that the colorist, Laura Martin, deserves some love because the colors in this issue in particular are super striking. Despite the issues with plot and characterization Laura Martin, Jorge Molina, Craig Yeung, and VC’s Cory Petit have done some amazing visual work and captured a simultaneously serious and fun tone.

Overall, this issue was pretty lackluster because once again the plot of Secret Wars dominated the issue. Without the character beats and fun that made the first issue so exciting, A-FORCE is just another Secret Wars tie-in that is more concerned with continuity than being fun and entertaining.