Most people know or should know Max Bemis from the punk rock band Say Anything. Bemis also moonlights as a talented comic book writer, working on titles such as EVIL EMPIRE and this summer’s hit X-MEN: WORST X-MAN EVER. His latest edition to Marvel NOW is titled FOOLKILLER. You guys remember Foolkiller, right? The merc that dressed up as blue Zorro in the 90’s, tagging along with Deadpool, killing those who he deemed to be “Foolish?” Yeah, you don’t. Well no worries, because Bemis does a fabulous job meta-commenting on the character’s background to his whereabouts now in a matter of few panels in FOOLKILLER #1. 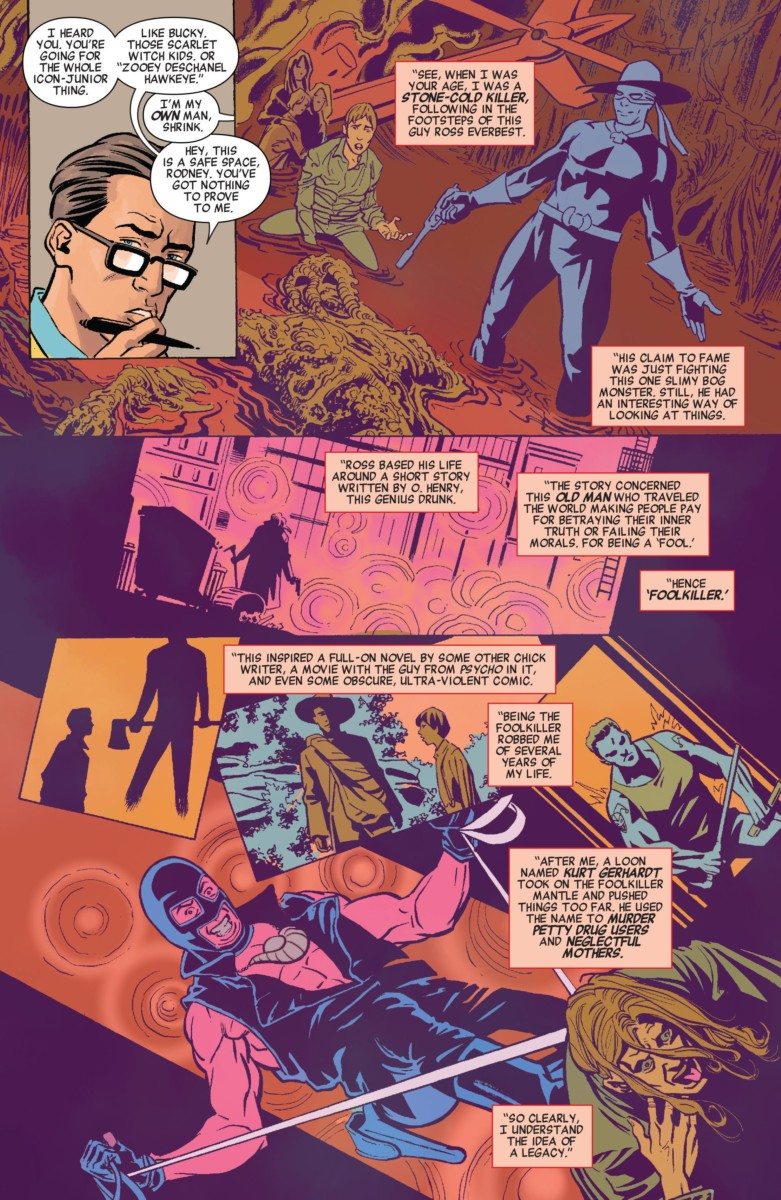 READ: Can’t get enough from the Merc with the mouth? Read our latest DEADPOOL analysis

We dive into the narrative of Greg Salinger, a paid mercenary turned psychotherapist for low life criminals provided by S.H.I.E.L.D. Greg lives in Queens, has a “sick” apartment, dog, beautiful girlfriend and carries a mysterious man purse wherever he goes. His first major patient is a troubled young man, who labels himself as “Young Red Skull.” Greg sympathizes with his patient, even explaining how he became the Foolkiller and how he’s on the other side of the couch due to his change of perspective. Although Greg admits to wearing fake glasses with a fake stare and comforting his patient with the act of landing a hand on a crying shoulder, literary, he genuinely does care about his troubled patient. During a session, Greg explores the troubled past of his young patient. He describes the patient being a victim of a broken home and having an abusive relationship with his father, yet the patient reveals he was never abused. It’s intriguing to analyze if Greg’s therapy sessions may link with his own psyche. Did Greg himself suffer from an abusive childhood or was he recalling the memory of someone close to him? Perhaps Bemis will shine a light into the void as the series moves forward. 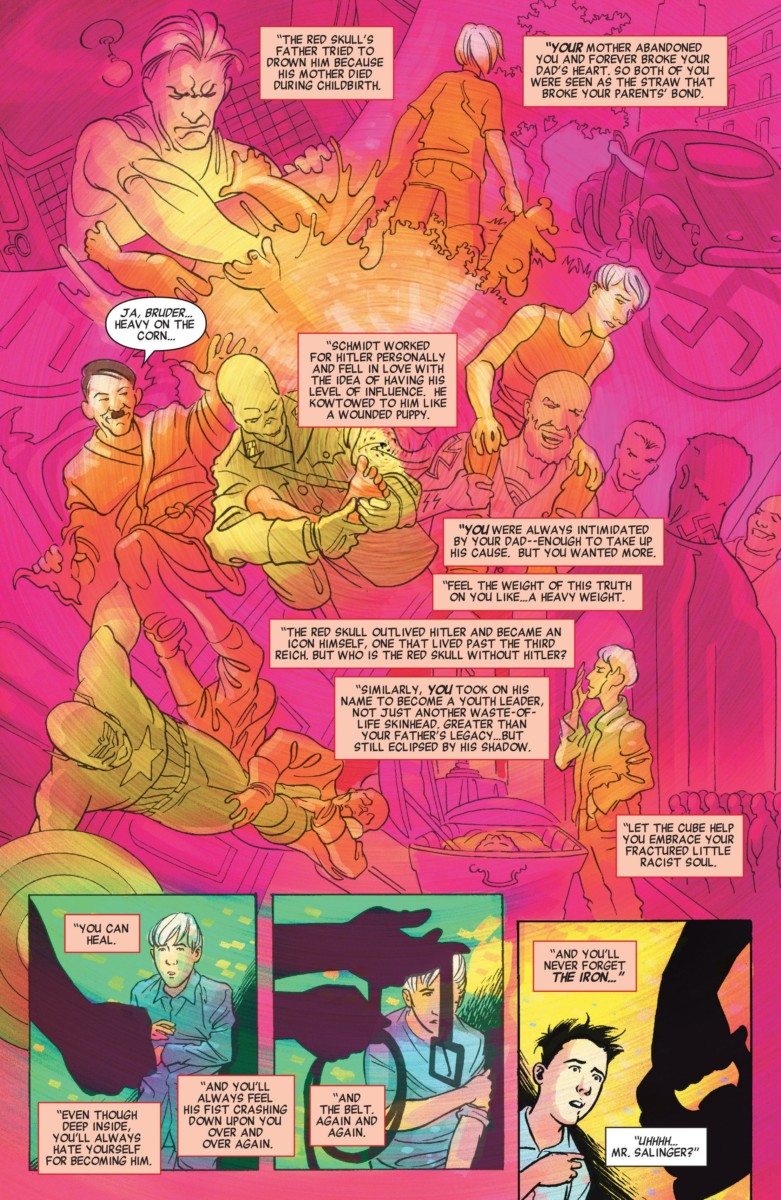 READ: Catch up on the bromance between Spidey-Pool

Artist Dalibor Talajic, along with the creative team, paints a vivid atmosphere where these characters are portrayed with meaningful expressions. From the page above, you can note how Talajic captures a hypnotic experience. The use of purple highlights a difficult childhood linked with the memories of a Nazi criminal. As the pages turn towards the end, the mood becomes darker.  It’s unfortunate to see the action Greg takes as the panels shift, but Talajic paints a strong expression on the character, leaving him motionless yet leaving you cheering for more. FOOLKILLER #1 makes you feel safe at first, shining a light on second chances and progressing a character in his new lifestyle. But then it takes a turn, like Showtime’s DEXTER, minus the show’s disappointing characters and lack luster executions. Just when you feel everything’s going to be okay, when Greg’s young patient start to show progress, Bemis leaves you in shock by the end of this issue. Sure, there’s a foreboding villain attached, which is a bit predictable, but it does not take away from the kill and the big “WHAT’S IN THE BAG (man purse)?” reveal.

FOOLKILLER #1 is an excellent entry to Marvel’s addition of underrated characters and a must read for the coming months. FOOLKILLER’s protagonist is sure to comfort readers with his meta narrative and even win hearts despite the character’s questionable actions. Hopefully, Max Bemis can keep this fool running, further experimenting with Greg’s therapy sessions while diving deeper into the character’s motives.