Season 3 of THE FLASH just wrapped up and it’s going to be a long wait until Season 4 debuts this September. After the Season 2 finale ended in a cliffhanger, Season 3 started off with a ceremonious bang. However, even though the third season is very good, it dramatically fizzled with the season finale and another cliffhanger.

The Repercussions of Flashpoint in Season 3

All things that came out of Season 3 revolve around the repercussions of Barry creating Flashpoint. It is the most important concept in Season 3, and it is the ultimate reset button for the show. The only problem with Flashpoint is it was only one episode and it didn’t do enough. The show runners could have used more episodes in Flashpoint to flesh out complicated plot lines like the Alchemy-Savitar connection.

Season 3 begins instead with Barry living a “what if” scenario with his parents who are now alive in Flashpoint. Reality quickly settles in and Barry’s tampering with the timeline comes back to haunt him. One thing that Season 3 of THE FLASH makes clear is that altering the timeline has its consequences.

While Flashpoint changed several dynamics of the show, it provided a character shift for all of the supporting characters. Cisco holds resentment towards Barry because his brother Dante died and Barry didn’t fix the timeline to prevent his death. Joe and Iris’s relationship sour after Iris discovers Joe hid the fact that her mother was still alive. Caitlin Snow turns into Killer Frost, and new characters are added to the show like Julian Albert. Jay Garrick even tells Barry that he cannot continue to alter the timeline without breaking the space time continuum.

READ: Watch THE FLASH season finale? Here’s why it Stumbles To The “Finish Line”!

The character shift wasn’t the only thing created after Flashpoint: Alchemy shows up as a representation of Barry’s consequences. The moment Barry altered the timeline he created the vacuum for Alchemy, who later turns out to be a vessel for Savitar. Alchemy sets Savitar’s plans in motion which included creating the meta-humans from Flashpoint and giving Wally West his powers.

Alchemy was a good concept that was poorly executed because he wasn’t distinguishable enough from Savitar. In fact, Alchemy just fades away when Savitar emerges and it was a complete waste of a villain. Out of all of the changes that came out of Flashpoint, Alchemy was one of the few that didn’t work this season.

The character shift in this season of THE FLASH gave supporting characters their own stories. This really worked well for Caitlin Snow’s character that plateaued after the first two seasons. In Season 3, Caitlin was coping with her internal conflict with her powers and becoming Killer Frost. One of the many results from Flashpoint was that Caitlin becoming more like her Earth Two doppelgänger.

Caitlin’s internal struggle works well throughout the plot of Season 3 because she has to acknowledge Killer Frost. Killer Frost is a representation of Caitlin repressed emotions, so when Caitlin’s emotions surface she transforms into Killer Frost. In “Monster” this becomes clear because Caitlin starts to use her powers when she visits her mother. Caitlin carries emotional baggage because of her estranged relationship with her mother and because she can’t find a cure. Her anger is why she begins to slip in and out of Killer Frost throughout the season.

In “Killer Frost” Caitlin uses her powers to save Barry from Savitar. She slips into Killer Frost because of her repressed anger towards Barry for creating Flashpoint and indirectly giving her powers. It would seem that the more Caitlin gives in to her anger and uses her powers, the more susceptible she is to becoming Killer Frost.

READ: Want a review of the episode Savitar revealed his origin? Click here!

Season 3 does a good job at revamping the Caitlin Snow character. This leads to Caitlin finally becoming Killer Frost. Being revived by her powers in “Abra Kadabra” leads to “Finish Line” where Caitlin turns on Savitar. It was a way of resolving her issues with Team Flash. On the other side when Julian offers her a cure she opts-out of getting rid of her powers and she goes on a new journey to find herself. As the season ends Caitlin is no longer Killer Frost but a version of herself with powers. In Season 4 Caitlin could embrace her powers and become a character completely different from what we’ve seen before.

There are many theories about Savitar’s origin on reddit. Is he a time remnant from 2020? Is he Barry’s time remnant from when he defeated Zoom? Or is he an aberration from Flashpoint? No matter how the writers choose to answer Savitar’s origin, he will still be confusing to say the least. All things lead back to Flashpoint. So the best way to explain the most confusing character in THE FLASH’s history is to start with Flashpoint.

Barry created Flashpoint and unknowingly created a closed loop so Savitar could exist. Savitar kills Iris and causes Barry to create multiple time remnants to defeat him. In 2020, Savitar kills all but one of Barry’s time remnants, but he gets trapped in the speed force. Team Flash shuns the surviving time remnant and he goes insane because of it. He obtains the Philosophers Stone and he receives god-like speed and a suit of amour to protect himself. Going by Savitar, the time remnant goes to the past in different universes to spread the myth of Savitar. Savitar then goes back in time to kill Iris thus creating the loop, and himself.

Origin stories aside, there is a lot of irony in Savitar being Barry’s big villain this season. Savitar, a time remnant of Barry, is a problem that he indirectly created as a result of Flashpoint. He has as much of a hand as Barry does in impacting everyones lives this season. He manipulates Caitlin into becoming Killer Frost, he gives Wally his powers from Flashpoint, he kills H.R. and he tries to kill Iris for his own self preservation. In a strange way Savitar is a dark mirror of Barry’s consequences, Savitar’s origin story is the lesson Barry should learn from.

Season 3 focuses on Barry trying to save Iris after he ran 5 months into the future and saw Savitar murder her in “The Present”. The purpose of Barry saving Iris had another meaning besides being a part of the Savitar plot line. This season accelerates Barry and Iris’ relationship since Barry hit restart after creating Flashpoint. All things lead back to Flashpoint. After Barry sees Iris killed by Savitar the real guilt begins to pile on since Flashpoint help create Savitar. In a way Barry is responsible for helping create the man that will kill Iris. The lesson Barry learns is that he shouldn’t continue to tamper with the space time continuum under any circumstances. 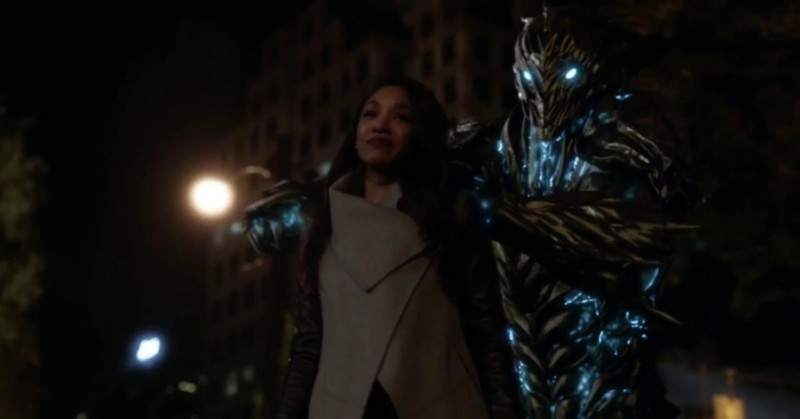 Barry Allen’s mission to save Iris throughout Season 3 provided a lot of interesting plot lines. Barry training Wally to defeat Savitar, Caitlin joining Savitar as Killer Frost, H.R. saving Iris, and Barry traveling to 2024. The most surprising plots out of those was when H.R. saved Iris in the season finale. The big reveal from the season finale was not shocking in theory, meaning someone else dying in Iris’s place.

It was surprising to find out that H.R. died in Iris’ place. His sacrifice was the best character moment and the most touching moment of the season. In an unsuspecting chain of events H.R. used his face changing device to protect Iris from Savitar knowing he would die. In an unselfish fashion H.R. redeemed himself from when he accidentally told Savitar Iris’ whereabouts on Earth-2. H.R.’s selfless act inspired Barry to redeem himself from creating Flashpoint. This inspired Barry to make the decision to go into the Speed Force Prison in the finale.

Ending with a fizzle and Season 4

Season 3 was fun, but towards the end it became predicable. The finale “Finish Line” ended with a fizzle. H.R. swaps places with Iris so Savitar would kill him in her place. Caitlin didn’t become a full fledged version of Killer Frost. Barry sacrifices himself as a tribute for the speed force prison, and Wally takes up the mantle as The Flash during the 3 month off-season. The predictability was bad especially since fans know the show would never kill off Iris when they have a disposable version of Harrison Wells. Don’t dwell on the Season 3 finale though, there is a lot of hope for Season 4.

In Season 4 characters like Kid Flash may get more screen time and a better plot line since Barry will be absent for an episode or two. Not to mention Caitlin Snow’s new character arc will be finding a balance between her former self and Killer Frost. Also, Team Flash will look very different since H.R. died and Caitlin left. This gives a chance for Julian Albert and Tracy Brand to join the team permanently replacing them to help The Flash. Lets not forget that there will be a new villain this season that may not be a speedster this time around. Devoe is teased in the final two episodes of Season 3 so he may be the villain for next season. That will be an interesting take because in each season of THE FLASH has had speedsters as villains. A different take will be refreshing.

One thing we can get excited for Season 4 is the possible easter eggs for Barry and Iris’ children, the Tornado Twins. Since Barry and Iris will likely have their wedding next season the show may drop hints for their children or their grandchild Bart Allen. Hopefully the next season of THE FLASH will have an entirely different look heading into Season 4.