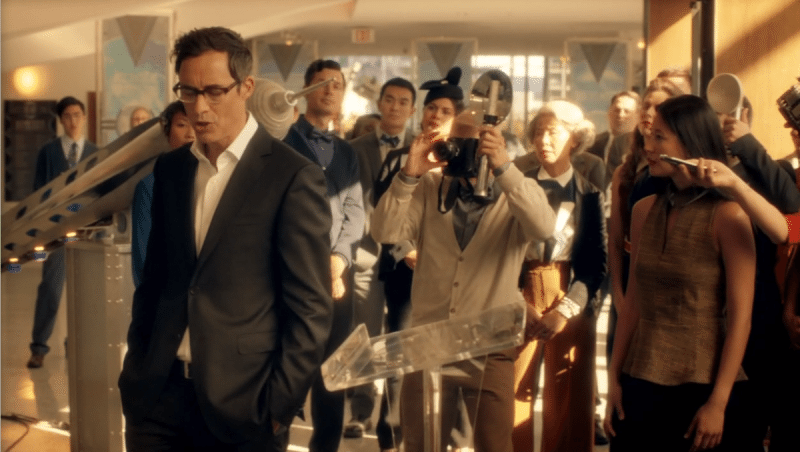 The episode opens with the Harrison Wells from Earth-2 giving a press release on a new app eight months in the past. Wells’ new app is a wristwatch that can detect the presence of metahumans. His presentation gets interrupted by Jay Garrick who blames Wells for causing the particle accelerator to explode thus creating all of these metahumans including Zoom. Wells denies these allegations and tells Garrick that he hasn’t done his job of stopping Zoom. Jay ends up leaving in a Flash and Wells’ daughter asks her father if he is okay (Earth-2 Harrison Wells apparently has a daughter). I find it fascinating that the style of clothes and architecture is very similar to the 1950s, but the technology used is modern. This makes me wonder what other similarities/differences the two earths share.

READ: Want to catch up on the latest Flash episode? Check out last week’s review!

We cut to STAR Labs in present day on Earth-1 where Earth-2 Harrison Wells reads the autobiography from his counterpart. The Flash team initially has some reservations about working with Earth-2 Harrison Wells (who will be referred to as Harry from now on). Which makes sense considering the previous Harrison Wells betrayed all of them and hurt each one in some way. Although I like that Caitlin pointed out that the Harrison Wells they all knew wasn’t the real Wells, it was Eobard Thawne posing as him. Nevertheless the team still feels uneasy about trusting him, Joe even shoots at Harry when he first sees him! Barry catches the bullets in time and Harry antagonizes the man who just tried to shoot him. Barry pulls Joe aside and updates him on Harry; he’s not the Harrison Wells they knew, he saved his life against King Shark, and he wants to help Barry stop Zoom. Joe admits to Barry that he heard from Mercury Labs that Harrison Wells was back. Barry is hurt that Joe kept that from him, but he understood why. Joe leaves to inform Iris on the situation. At Iris’ job Joe tells her everything and gives her a gun to protect herself. Honestly I’m surprised he didn’t give one to her sooner. I understand that she had a cop for a boyfriend, but she was still dealing with metahumans and it would make sense that she be able to protect herself.

We cut to Barry and Cisco at Jitters where they have a very private conversation about their superhero problems in a very public setting. How they have managed to keep Barry’s secret identity a secret is beyond me! In fact Patty overhears part of their conversation but, thankfully, misinterprets what they were saying. She also reveals that King Shark was put away, which means that he’s not dead and could be used for future stories, hooray! Patty attempts to ask Barry out on a date, but he avoids it due to his nerves. Cisco tells Barry that he should be bold and ask Patty out. To put his money where his mouth is Cisco asks the cute barista out on a date. 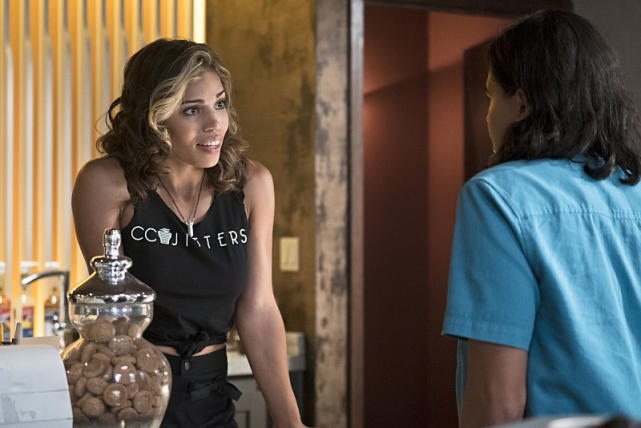 Unfortunately, she turns him down (her loss Cisco) but then suddenly he gets a Cisco vision of Dr. Light robbing the Central City bank. Cisco tells Barry, and he rushes over to stop the crime. By using the citizens as distractions, Dr. Light gets away from the Flash.

Back at STAR labs, Harry tells Barry that Dr. Light was sent by Zoom to kill Barry, so he proposes that they use her as bait to lure Zoom to them. Jay comes in and is completely against this plan. Jay also tells Barry that the fact that Harry is all of the sudden feeling guilty for creating Zoom is extremely suspicious. After watching the hostility Jay has towards Harry, I can’t help but wonder how episode two would have gone down if Barry revealed that the man who betrayed him was Harrison Wells. Perhaps Jay would have sympathized more or even revealed more information about the Wells from his Earth. 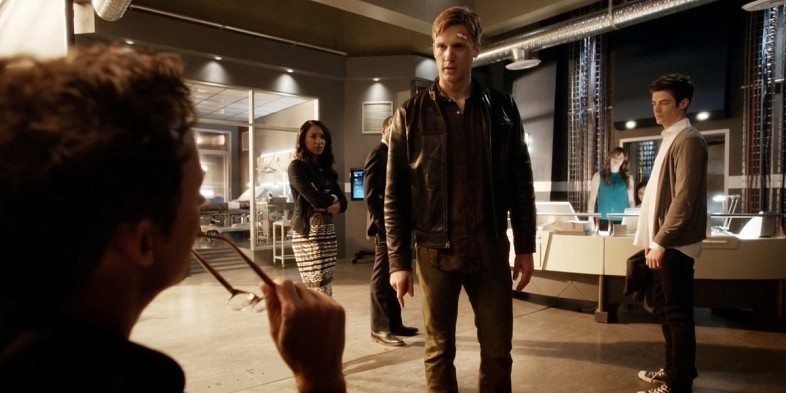 In a small side story, Barry finally asks Patty out on a date. Except after a second confrontation with Dr. Light, Barry is left blinded and must figure out a way to go on his date without being able to see. Cisco gives Barry sunglasses with a camera built inside so he can direct Barry during his date. The date itself is awkwardly adorable, and the two really hit it off. It’s refreshing to see Barry out on date and act like a normal person for a change. Although having your best friend be your eyes and communicate with you during your date isn’t what I would call normal. 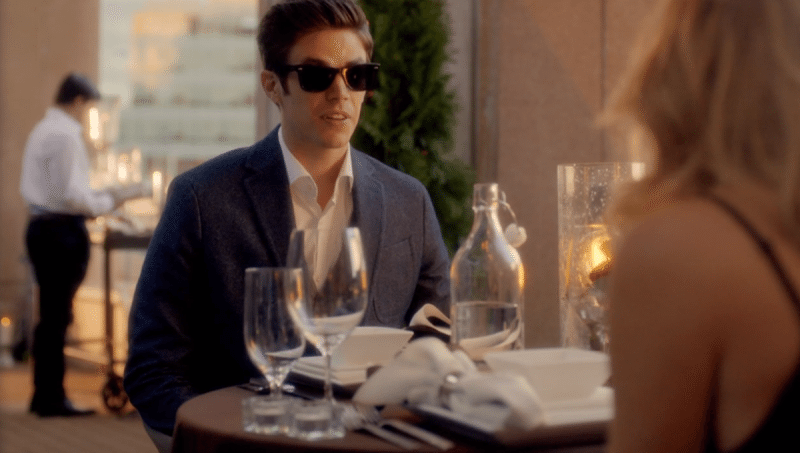 The reason Dr. Light blinded Barry was because she removed her visor and revealed that she is Earth-2 Linda Park. The Flash team expressed concerns for the life of Earth-1 Linda Park, because they feel that Dr. Light may try to kill her doppelganger just like Atom Smasher did. So Jay and Caitlin keep watch over Linda while she’s at work and while Barry is on his date. Oddly enough, the Barry and Patty weren’t the only ones getting closer this episode; Caitlin and Jay almost share a kiss. However they were interrupted by Dr. Light who flipped the van the two were in. Light goes inside and attempts to kill Linda, but, thanks to the combined effort of her editor Larkin and Iris, Linda is saved from Dr. Light. Sadly, Larkin sacrificed himself to save Linda, and Iris used her gun to shoot the mask off Dr. Light’s face. Dr. Light escapes before any of the authorities come on the scene.

Back to Barry’s date, Patty reveals that she knows that Barry can’t see her. What’s interesting is that she never asked why or how Barry lost his eyesight. I predict that Patty will eventually figure out that Barry is the Flash, she seems too smart to not realize it on her own. The date goes even better once Barry is honest about his eyesight. The two end the date with a passionate kiss that gives Barry his sight back. 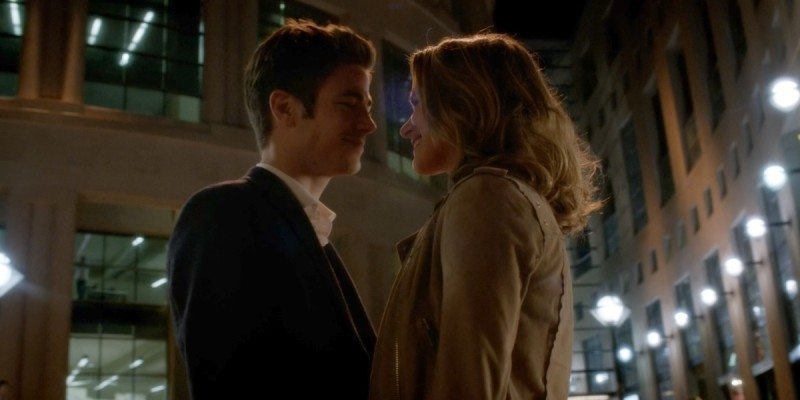 Back at STAR labs Harry gets all up in Jay’s face telling him that none of them would be in this situation if Jay wasn’t such a coward and took care of Zoom when he had the chance. This comment, added to the loss of his speed, pushes Jay over the edge, and the two begin to fight. The fight lasted longer than I expected, but eventually Barry breaks them up.

Harry ends up going to Cisco’s lab where Barry shares with him that the other Wells was his mentor before betraying him. You can tell in Barry’s tone of voice that he longs for that kind of relationship again, except Harry doesn’t seem too eager to fill that role in Barry’s life. Instead Barry tells Harry that they have Dr. Light’s helmet, and Harry tells him that he knows how they can locate her using it.

In a grand fashion, which I’ve come to expect from Wells regardless of what Earth he comes from, he reveals to the Flash team that Cisco is a metahuman. I feel somewhat foolish for gasping during that scene because I knew Cisco was a metahuman since season 1. However the way Harry presents the news made it seem like a huge revelation. So Harry forces Cisco to use his powers of Cisco vision to locate Dr. Light. Cisco sees Light attempting to leave via train station. 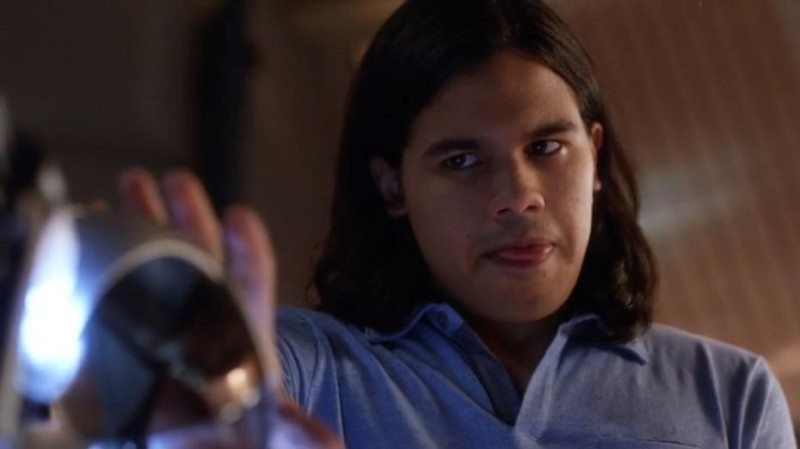 This time the Flash is done trying to reason with Dr. Light. He tries to take her out, but he can’t seem to get close enough. Harry suggests that Barry do a speed mirage where he moves at a high velocity where it seems like he is at two places at once. After a couple of tries the Flash successfully executes the technique and knocks out Dr. Light. 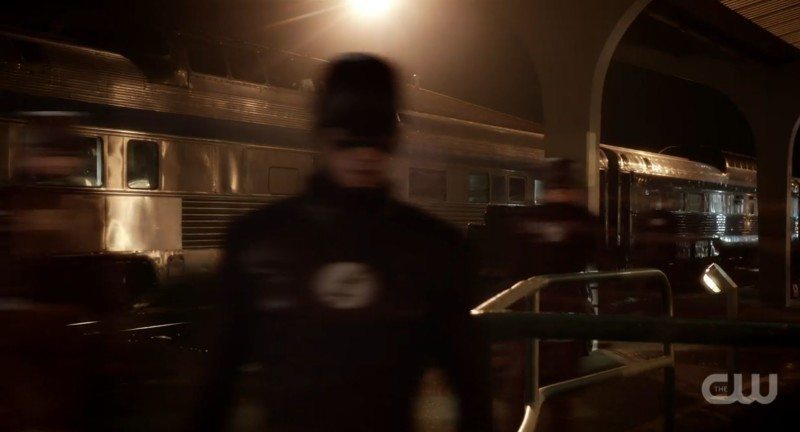 He takes her back to STAR labs and puts her away in the pipeline. After that Barry reveals that he is going to go with Harry’s plan to use Dr. Light to lure Zoom to them. Jay cannot agree to help with this plan as it might make Barry lose his speed or worse, kill him. So instead of staying with his friend to be there for him in case the worse happens, he decides to leave the Flash team. How does that make any sense? If Barry is deciding to go through with a plan that could potentially kill him, wouldn’t Jay want to be by his friend’s side?

Regardless of Jay’s misguided way of thinking, Barry, Caitlin, and Cisco decide to unwind at Jitters. When Cisco orders some coffee for his friends, he sees the barista who turned him down earlier in the episode. She tells him that he caught her off-guard the other day and that she had recently moved to Central City, so she was still adjusting to all the weirdness. Cisco asks her out again and this time she agrees and tells him her name is Kendra Saunders (aka Hawkgirl).

CLICK: Wanna catch up with Starling City? Check out our latest review of ARROW! 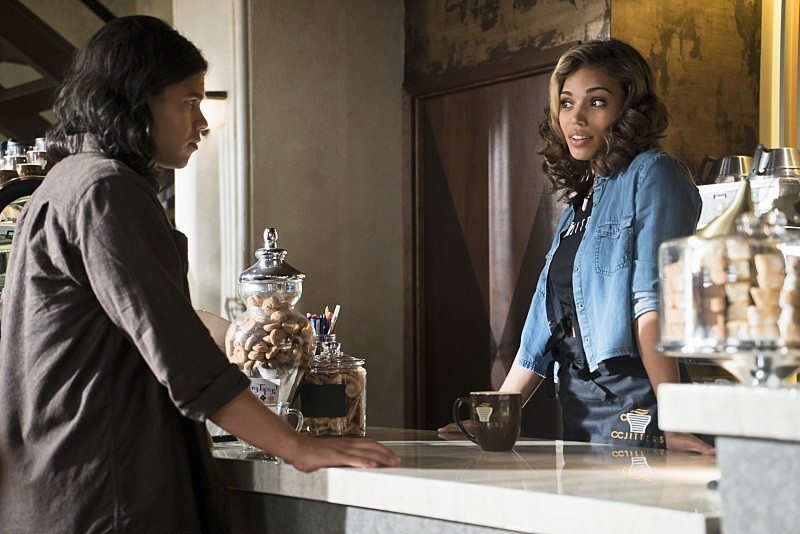 Cisco goes to the table with a newfound sense of confidence, and Caitlin points out that now that Cisco is a metahuman he needs a nickname. I imagine Cisco had been so concerned with what was happening to him that he didn’t realize he could now have his own codename. I was a little disappointed that Barry was the one who came up with his name, but I’m proud to announce that Cisco has finally become Vibe (at least in name). Hopefully Cisco develops his other powers as the series progresses. 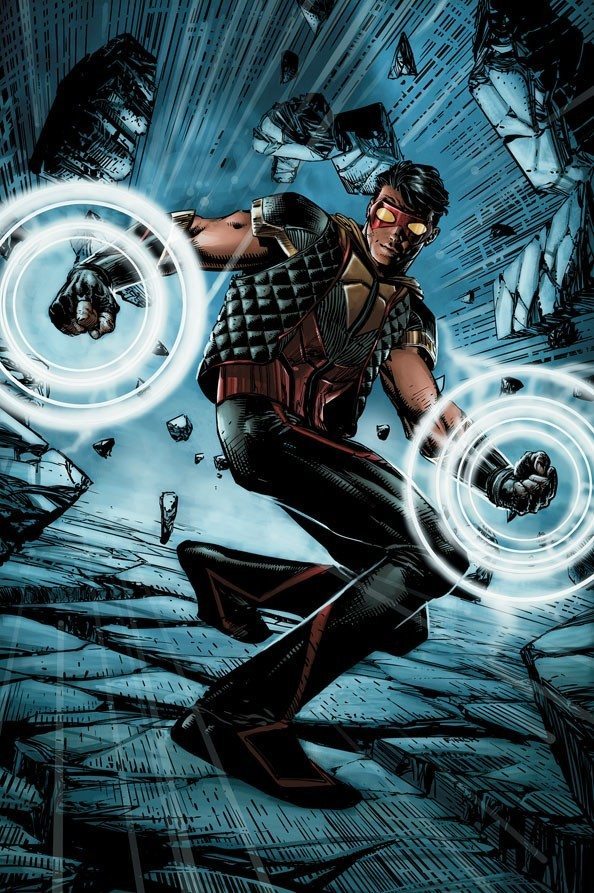 The final scene of the episode takes us back to Earth-2 where we see Harry’s daughter being held captive by Zoom. She tells him that her father will be back to save her, but Zoom tells her that her fate is still to be determined. He then rushes off, and the episode ends.

After last week’s episode with King Shark I wasn’t sure how they were going to top it, but they managed to with this episode. The return of Harrison Wells added a new dynamic to the team. He’s not the kind hearted Wells the Flash team thought he was last season nor is he the villain set out to ruin their lives. Earth-2 Wells is just a smart man who wants to save his daughter from the monster he created. The introduction of Kendra Saunders, Cisco taking the name Vibe, and Barry making speed mirages-all contributed to making this one of the best episodes so far in this season. Next week it seems that Linda Park may be joining the Flash team as they plan to have her pose as Dr. Light and lure Zoom to Earth-1. This plan sounds dangerous, and I can’t wait to see how it fails (you know it’s going to). Till next week Flash fans!