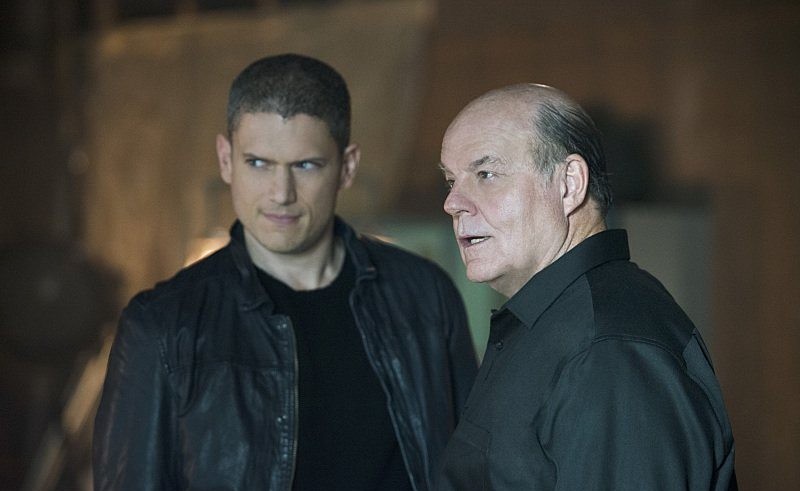 The episode opens with Barry working in his lab, then the intensity level kicks up to a 10 when Iris calls informing Barry that she is in a building avoiding bullets! Acting quickly, Barry find out Iris’ exact location and rushes to her aide. He pulls an Aladdin and asks Iris if she trusts him, she does and then Barry has her jump off the building! As the Flash, Barry catches Iris as she falls and dispatches the two men shooting at her. This was an exciting opening to an episode even though it had very little to do with the overall plot. It did act as an example for Barry to tell Joe later on in the episode to show how strong Iris has become. The main theme of this episode clearly revolves around families, specifically the West family and the Snart family.

The previous episode had Iris’ mother return back into the lives of the West family, but where she’s been and why she left were initially a mystery. Joe’s wife Francine has returned to Central City to help her daughter get over the death of her fiancé. This may be the reason why she returned within the show, but from a plot perspective her return could lead to another member of the West family. 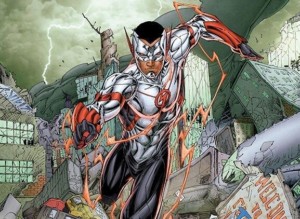 But Joe wants Francine gone, so he attempts to bribe her to leave. She is appalled that Joe would think she could simply be bought into leaving. All Francine wants is a chance to prove she’s changed for the better and see Iris again. Now Joe is faced with the dilemma of telling Iris the truth after lying to her for all these years about what really happened to her mother.

Although Joe shouldn’t feel too bad, compared to Lewis Snart he’s a saint! Lewis enlists the help of his son Leonard (aka Captain Cold) to assist him in a heist. Lisa (aka Golden Glider) suspects foul play since Leonard hates their father and would never work with him. So she asks Cisco and the rest of the Flash team for help to find out why Leonard is helping their father. At first Caitlin is suspicious that this could be a trap, but Lisa begins to tell the Flash team about her childhood with Lewis as a father. The Rogues may be criminals but Lewis used to beat his daughter as way to “teach her a lesson”. The only person who ever protected Lisa growing up was Leonard. Lisa believes that their father must have something over Leonard to get him to cross over to the dark(er) side.

When Lisa describes how Lewis used to beat her, the audience can see the psychological pain it must have caused her while growing up. I love that this show can deal with real issues and still retain its light hearted feel. This episode had the families deal with two very serious topics; child abuse and drug addiction. The drug addiction was tackled with the West family.

Joe brings Iris to his house and tells her the truth about what happened to her mother. In a heart breaking scene Joe explains that one night Iris’ mother took an overdose of pills and was sent to the hospital. Shortly afterwards Joe put her in rehab, but Francine checked herself out. Joe decided it would be best if Iris was raised to believe that her mother was a loving and caring woman who died instead of telling her the truth. Iris understood why her father did what he did and she forgives him. The acting performance by both Jesse L. Martin and Candice Patton were top notch! I usually only get emotional during scenes with Barry and his father, but that scene was incredible.

Now that the West family issues have been more or less resolved, let’s focus on the dysfunctional Snart family. While discussing how to execute the heist Lewis’ tech guy bad mouths Captain Cold, and Lewis responds by blowing up the tech guy’s head!

Barry, Joe and Patty investigate the scene the following day and figure out that Lewis had implanted a bomb into the victim’s head. Barry soon puts two and two together and realizes that the only way that Lewis could ever make Leonard work with him was if he threatened to kill the one thing he cares about, his sister. Lewis implanted a bomb into his own daughter’s head for the sake of committing a crime! Watching the lengths Lewis will go to commit crimes really shows that Flash’s Rogues are not all that bad, at least they have a code they live by.

Deciding to take advantage of the fact that Lewis’ team now needing a tech guy, Barry infiltrates their group as a technical criminal named Sam. Meanwhile back at STAR Labs, Cisco and Caitlin try to figure out how to extract the bomb from Lisa’s head without killing her. So Lewis, Leonard and Barry go to the building to execute their heist. Once inside you definitely see the contrast between how Lewis and Leonard operate. Lewis does not hesitate to kill anyone who stands in his way, whereas Leonard finds killing people to be lazy and unnecessary. Between the scenes with his father and Barry, Captain Cold is showing that he is not such a bad guy.

Speaking of the scenes with Barry, I would just like to point out that I absolutely love their interactions. The dialogue and how the actors deliver their lines, it’s like the comic book characters have come to life. 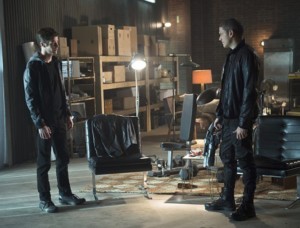 Back to the heist, so Barry uses his super speed to break crack the combination to break into the vault. Although after breaking into the vault, Lewis shoots Barry in the chest! Since Barry is a speedster he was able to catch the bullet in time and fakes his death. While at STAR Labs Cisco develops a pressurized gun that should be able to suck the bomb from Lisa’s head. The scientists learn that the bomb can’t come in contact with the air of it will explode automatically! The pressure is on (see what I did there?) when Cisco tries to take out the bomb while the Flash takes on the Snarts.

After some intense back and forth scene transitions, Cisco gets the bomb out of Lisa. The Flash informs Leonard that his sister is safe and almost immediately after hearing this Leonard shoots his father in the chest with his cold gun. When the Flash calls him out on his no kill rule Captain Cold reasons that it was fair that he broke his father’s heart for breaking his sister’s heart. Later on in the episode Barry pays a visit to Leonard who is being held in Iron Heights Prison. Barry informs Leonard that he believes that there is good in him and that maybe one day in the future he might do some real good for this world.

There was a minor storyline in this episode with Jay and Caitlin trying to figure out how to stabilize the breach in the STAR Labs basement so it can act as a door back to Earth-2. Caitlin and Jay share some cute bonding moments (I believe that the shipping is called SnowJay) and eventually towards the end of the episode they manage to stabilize the breach or Speed Cannon as Jay calls it.  However, Caitlin convinces Jay to stay on Earth-1 for a little bit longer so he can help them stop Zoom. Jay agrees and decides to head home, actually does Jay have a home? He’s been living here on Earth-1 for about 8 months now, so are we to assume he has a job and can afford an apartment? Putting a pin on those questions for now because what happens next is going to have some major impacts on this rest of this season.

First, Professor Stein appears to be suffering a stroke once again, but then his body becomes engulfed with flames like Firestorm! Initially the flames were their  usual red color, but then it changed to blue flames. Eventually the flames went out and Prof. Stein once again ends an episode passed out on the floor.

LISTEN: Explore the origins of one of BATMAN’s greatest villains, the RED HOOD!

The biggest surprise this episode came from the last 30 seconds when the Speed Cannon began to fluctuate. Then in Terminator fashion, a figure appears outside the Speed Cannon. He stands up and it is revealed to be Harrison Wells from Earth-2! 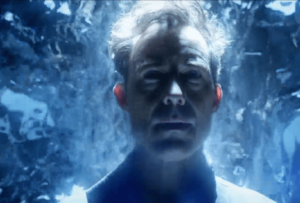 How will Barry react to the (sort of) return of his greatest enemy? Next week the Flash team find a new partner for Prof. Stein to complete the Firestorm matrix once again. Things just keep getting better and better with this show. The episode was low on major plot developments but it did progress and set up the inevitable spin-off Legends of Tomorrow. All in all this was a solid episode with some good side character development. Till next time Flash  fans!