There are some huge revelations this episode, but personally the one that gets me the most excited is the establishment of the multiverse. The implication for what the multiverse could mean for DC in both television and movies is incredible!

READ: Check out the review for last week’s Flash episode!

Before getting into that, the episode picks up where the last one left off with Jay explaining to the Flash team who he is and where he came from. Jay describes how he was the Flash in his world and how he was battling Zoom when the singularity happened. Jay describes Zoom as an evil speedster who will stop at nothing until he is the only speedster left. If that is Zoom’s ultimate goal then he is different from his comic book counter-part; the Zoom in the comics considered himself a friend to the Flash (who was Wally West). Zoom would make the Flash suffer in an attempt to make him a better hero. As the season goes on I’m sure Zoom’s motives will become clearer and make more sense. If he really is as powerful as Jay says he is, then why doesn’t he just kill Barry himself?

Jay explains that when the singularity opened up it created a portal to Jay’s world and sucked him into Barry’s world. Unfortunately getting sucked into the singularity caused Jay to lose his super speed. Barry is suspicious of this unknown individual and is hesitant to trust his story. This is a natural reaction considering what happened with Harrison Wells/ Eobard Thawne last year. Barry isn’t taking any chances and has Caitlin run some tests to see if Jay’s story checks out. There is some chemistry happening between Caitlin and Jay, but they’re not the only new possible couple on the show.

Patty Spivot was introduced in this episode and she really hit it off with Barry, which is more than I can say for her and Joe. Patty wants to be a part of Joe’s Anti-Metahumans Task Force, but it has disbanded after the Atom Smasher incident. However Patty is determined to be Joe’s partner and help him stop metahumans from terrorizing Central City. The writers initially stated that Patty would be the Flash’s own Felicity, but she is not a carbon copy of her. Patty is certainly a nerd and knows just as much as Barry about forensics, but she is also a capable cop who can handle herself. At first I was against having a new love interest on the show but the actress and the character convinced me otherwise.

The metahuman Zoom brings in this week is known as Sand Demon, and as the name suggests he can turn parts of his body into sand. Zoom tells him what he told Atom Smasher, kill the Flash and I’ll take you back home. Apparently Zoom is able to travel trough the breaches caused by the singularity. Speaking of those breaches, Cisco and Professor Stein use the power of science to find where and how many of these breaches there are.

Sand Demon tries to lure Barry into a burning building in an attempt kill him. Sand Demon escapes due to the fact that Barry can’t physically grab him while in sand form. Once the cops arrive on the scene Patty is able to obtain a sample of the sand which the Flash team is able to pull a DNA sample from. Cisco finds out a bit more than he initially wanted when he observes Sand Demon’s sand particles. He has another Cisco Scope and sees Barry facing off against Sand Demon earlier in the episode!

As the episode goes on Barry’s suspicions begin to hurt the other members of the Flash team. Iris takes Barry aside and convinces him to trust people once again. Jay is not Harrison Wells and the rest of his team will stop believing in him if he stops believing in his team.

Eventually Joe brings in Eddie Slick (Sand Demon from Earth-1) who is not a metahuman, but Joe does reveal that Iron Heights Prison is now capable of holding metahumans. It’s good to know that the Flash team doesn’t need to keep all of their prisoners in the pipeline anymore. Realizing that they have the wrong man, Joe lets him go only to have the other Sand Demon appear and kidnap Patty Spivot! This invokes Barry to finally let Jay help him stop Sand Demon and save Patty. Jay teaches Barry how to use the lighting strike!

While Barry voices his concerns about whether he can trust Jay or not, Caitlin, Professor Stein and Cisco try to locate Sand Demon. Cisco decides to intentionally activate his Cisco Scope and touches Sand Demon’s sand particles once again. In his vision he sees the location of where Sand Demon is keeping Patty and notices a concussive bomb that he is working on. Towards the end of the episode Professor Stein calls Cisco out on his lucky hunch and Cisco reveals the visions he has been having. Professor Stein is ecstatic and can’t wait to perform tests to learn  more about this ability, but Cisco is against it. The reason he gave was that his new ability came from Harrison Wells and he is unsure of how to feel about getting powers from such an evil man. This reason makes sense considering Wells made a huge impact on Cisco (literally) and he probably just needs time to understand this power before he shares it with the rest of the Flash team. However, Cisco  has no problem informing Barry and Jay of Patty’s location. Barry decides to distract Sand Demon by psyching him out with Jay. Jay may have lost his speed but Sand Demon doesn’t know that. So Cisco gives Jay the helmet that fell out of the portal when Eobard was going to travel into the future in the season finale last year, thus completing his costume.

While Jay distracts Sand Demon as best as he can, Barry saves Patty from the concussive bomb. The Flash uses his new technique to strike lightning towards Sand Demon. The lightning strike completely shatters Sand Demon which I assume killed him. Barry better remember this moment when he tries to chastise Oliver for using excessive force. The scene ends with this beautiful easter egg of the classic cover of the comic starring the Flash from two worlds. 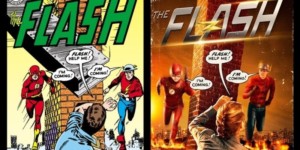 The final minutes of this episode offered many surprises;

1) Iris’ mother and Joe’s ex-wife is back in town and wants to see their daughter.

2) Professor Stein suffers some kind of stroke while explaining the number of breaches to the other members of the Flash team at STAR Labs.

3) A scene taking place in Earth-1 shows that Harrison Wells still exists in that universe!

This episode was a superb follow-up to last week’s Flash premiere. The special effects were much better than the previous episode; I feel more grounded villains are easier to do for the SFX team. Finally, the establishment of the multiverse could possibly connect the DC cinematic universe to the DC television universe! It may be impossible to pull off, but I would love to see a trilogy based off of the 1985’s CRISIS ON INFINITE EARTHS! It’s a lot, I know, but I guy can dream.

LISTEN: Check out our podcast on INFINITY GAUNTLET and FINAL CRISIS

That’s all for this recap, next week is the return of our favorite rogue Captain Cold! Till next time Flash fans!