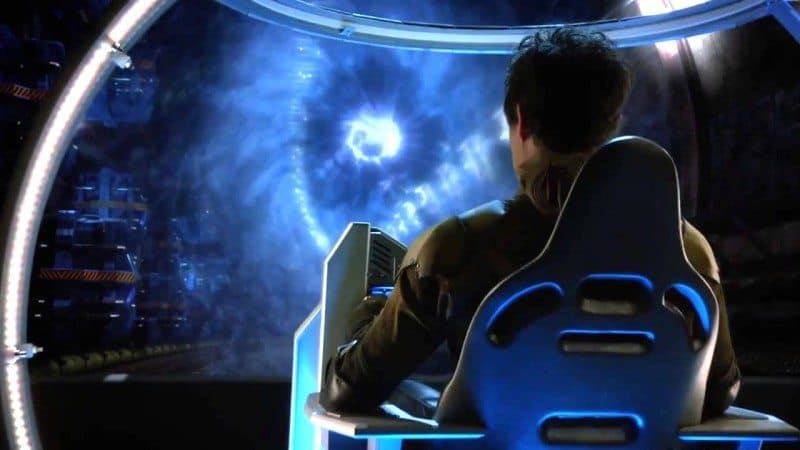 This was easily the best season finale of all the DC superhero shows this year!

Barry approaches Eobard Thawne’s cell in the pipeline to finally confront him about why he killed Barry’s mother 15 years ago. Eobard reveals that he and the Flash are mortal enemies, but one day Eobard learned the identity of Barry Allen. Using this information Reverse-Flash (RF) planned to go back in time and kill Barry when he was just a child so that there would be no Flash in the future. Future Flash followed RF into the past and saved his younger self. RF decided the next best option would be a personal tragedy, so he killed Barry’s mother hoping it would be enough to derail him from the path of becoming the Flash. Unfortunately for Eobard, this trip to the past severed his tie to the Speed Force, preventing him from returning to his time. Eobard explains to Barry that he needed Barry to get faster so that he could return home, so he offers Barry a proposition; help him return to his home in the future and he will help Barry go into the past to save his mother. 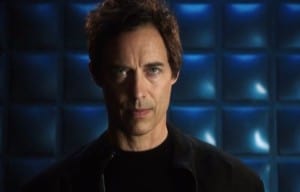 Dr. Stein explains to Barry and the rest of the Flash team that if Barry could theoretically go back in time to 15 years in the past, then it could cause unimaginable consequences to the present (Flashpoint anyone?). Barry asks Joe for advice on what to do, and Joe suggests that Barry should go through with it, even though he is fully aware that it would mean Barry wouldn’t end up living with him because Barry’s mother would be alive and his father wouldn’t be in jail. Joe is willing to sacrifice his relationship with Barry if it means Barry could have true happiness. Barry’s father Henry provides a different response to the proposition. Henry feels that his mother would love the man Barry has become and wouldn’t want to be the reason that Barry changes.

Need to brush up on your comic book history? Click here!

Back at S.T.A.R Labs, Ronnie tells Caitlin that he and Dr. Stein are staying in Central City permanently and that he still wants to get married to her. I normally complain about romantic relationships on CW shows, but in this case I feel it was necessary. The wedding was a very sweet scene in an episode filled with many tears. 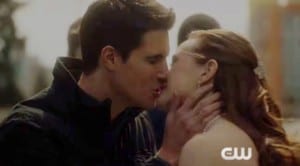 Eventually, Iris tells Barry that he needs to stop focusing on what other people would want and do what he wants. Iris also reveals that she knows about the future newspaper article and that they are married in the future. The two discuss the possibility of being married in this alternate timeline that will be created if Barry does stop his mother from dying.

Barry eventually agrees to Eobard’s proposition and he explains his plan; Barry needs to run around the particle accelerator with enough velocity that, after a collision, it would create wormhole. Barry can enter this wormhole to travel into the past, and Eobard can enter to travel to the future. Since Eobard lost his connection to the Speed Force, Cisco, Barry and Ronnie build him a “time machine” that will allow him to enter the wormhole and travel through time. Requiring some assistance, Cisco visits Eobard in the pipeline for help.

After Cisco gets the needed information, Eobard reacts, angry at the fact that Cisco can’t seem to understand why Eobard did the things he did. Cisco brings up the alternate timeline where Eobard killed him and how he can still remember the feeling of his heart getting crushed by Eobard’s hand. Eobard realizes that Cisco must have been affected by the particle accelerator explosion! Cisco can see the vibrations in the universe; he is has a great destiny that was given to him by Eobard. Cisco leaves unsure of how to feel about this fact.

Another portion of the episode that was dedicated to romance was the Eddie and Iris relationship. They originally had broken up because of the future that Eobard showed Eddie, but Dr. Stein convinces Eddie that his future is not set in stone. He is an anomaly and his future is whatever he makes it. So, Eddie uses this knowledge to convince Iris to get back together with him. The two agree to “Screw the future,” and they kiss each other.

Dr. Stein realizes that Eobard’s plan has a slight downside; if the wormhole is left open for too long, then it will create a black hole which will engulf the whole world! Eobard reassures the Flash team that there will be no black hole, so long as Barry returns and closes the wormhole in under two minutes. 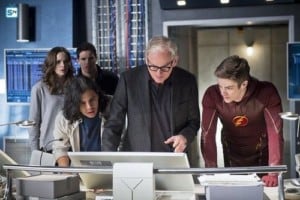 Barry suits up and says goodbye to his friends before beginning to run around inside the particle accelerator. As he runs, he taps into the Speed Force and sees several different images; Barry in jail, the Flash museum, Caitlin as Killer Frost, a scene from Legends of Tomorrow, and Barry as a young boy. Eobard tells Barry to focus on the night his mother died and the wormhole will take him there. The Flash arrives at his old house and he sees his future self who lets him know not to save Nora Allen. 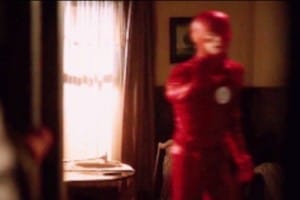 The present Flash waits in heart-wrenching horror as Reverse-Flash kills his mother. After Reverse-Flash leaves, present-Flash runs to his mother, and the two share a beautiful final moment with each other. Barry lets his mother know he and his father are doing all right and that they miss her very much. This scene was well-acted by both Grant Gustin and Michelle Harrison; the two of them brought tears to my eyes.

Back in the present, Reverse-Flash comments on Cisco’s design for the Time Sphere. He says that Rip Hunter designed one of the first time machines and that he would be very impressed with Cisco’s work. Suddenly Jay Garrick’s metal helmet falls out of the wormhole, and RF uses that as his cue to leave. As the time machine rises and is about to enter the wormhole, the Flash comes charging out of it and destroys the Time Sphere! An enraged Reverse-Flash asks the Flash why he didn’t save his mother and live the life he always wanted. The Flash responds that he already has everything he ever wanted.

The two begin to trade blows as Ronnie and Caitlin attempt to shut down the wormhole before the black hole is created. Reverse-Flash gets the upper hand and before he delivers the final blow, there is a gunshot! However, it is not the Reverse-Flash who gets shot, it’s Eddie who shoots himself. By doing this, he destroys the Thawne lineage, which in turn causes Eobard Thawne to fade away from existence! Before fading away, Eobard Thawne changes from looking like Harrison Wells back to looking like Eobard Thawne. He turns to Barry and says, “I’ve always been in your life Flash, how are you going to make it without me?” The Reverse-Flash fades away without a trace, but the Flash team’s problems are only just beginning. The black hole has begun to form and the group has to leave Eddie behind as he gets sucked into it.

We see a shot of the citizens of Central City panicking at the sight of the black hole. There is also a shot of Captain Cold and the newest female superhero, Renee Saunders a.k.a Hawkgirl, as the two look up at the sky. 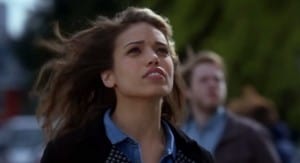 Dr. Stein explains how reversing the polarity of the black hole should be able to stop it. Essentially, it’s like the tornado from the first episode- bringing this season full circle. Barry needs to run in the opposite direction of the black hole’s suction in order to stop it. Barry puts his mask on and begins to run up a building so he can head directly towards the black hole. The Flash starts to run on the tip of the black hole when the episode comes to an abrupt end.

Quite the emotional rollercoaster ride, this finale had what every finale should have: suspense, drama, and a cliff-hanger ending that leaves the audience wanting more. The prevention of Reverse-Flash from ever existing does raise some questions about time paradoxes that I hope will be acknowledged and answered in the next season- if Eobard Thawne never existed, then who traveled back in time and killed Barry’s mother?  All that said, I could not make this season finale any better if I tried, and the writers and special effects department certainly outdid themselves with this finale. Congratulations to the cast and crew for a successful 1st season, and I believe I speak for all Flash fans when I say we can’t wait for Season 2! CW’s The Flash will air its sophomore season on October 6th 2015. ‘Til then, Flash Fans!

For more about the Flash including reviews of previous episodes, click here!