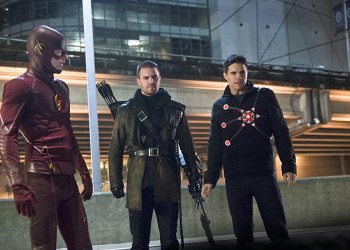 The episode begins with a voice over by Eobard Thawne to Eddie. He tells him to imagine everything and everyone that he holds dear. Then he tells him to imagine having everything taken away from him. Would he accept his new life or would he try to get back everything that was lost? Eobard is clearly the type of individual who will go to the ends of the Earth to get back what was taken from him, and it is this perseverance that makes him so deadly.

For the past two weeks, the Flash has checked all of Central City trying to find Eddie, but he has not had any luck. Meanwhile at S.T.A.R Labs, Cisco discovers a mysterious power source for Harrison Wells’ wheelchair. The battery not only powered the chair but it also powered Eobard while he sat on it, which would explain why he is so much faster than Barry. Suddenly there is an alert at S.T.A.R Labs; the particle accelerator has been put online again! Joe, Cisco, and Barry go down to investigate. Upon entering the particle accelerator the trio is knocked down by the Reverse Flash. Barry chases after him while Joe and Cisco are taken down by Peek-a-Boo after Reverse Flash opened her jail cell. Peek-a-Boo almost kills Caitlin, but thankfully Iris shows up and knocks her unconscious. The Reverse Flash however escapes Barry’s grasp, as he is still far too fast for him.

Before leaving the particle accelerator, Joe hears cries for help. They follow the yelling all the way towards the basement and find Eddie.

After Joe and Cisco take him upstairs, Iris discovers the ring that Eddie was going to give to her that night on the bridge. Later on in the episode, Eddie breaks up with Iris after telling him that Eobard showed him that in the future, she ends up with Barry and not Eddie. I felt sympathetic towards Eddie, but I’m also glad we are finally taking a step towards ending this love triangle.

It doesn’t take long for Eddie to bring everyone up to speed on Eobard Thawne’s plan; he’s going to use his “key” to power and reactivate the particle accelerator. After examination, Cisco tells the gang they have approximately 36 hours before it is reactivated. Once the particle accelerator is fully operational, the meta-humans inside of it will be killed instantly! Not wanting to have the lives of the meta-humans on his hands, the Flash makes a few calls to see if he can have the criminals moved to another location. After making a call to Lyla, Diggle’s wife, Barry is able to get a jet to transport the meta-humans to Oliver’s prison on the island. Unfortunately, Joe was unsuccessful in getting the needed transport from the CCPD. So Barry tries calling Oliver, Ronnie, and Dr. Stein, requesting their assistance to help move the meta-humans, but they are unable to help as well. So, Barry is left with no other option than to ask for help from Captain Cold!

Want to brush up on your comic history? Click here for articles and our blog

At first Captain Cold is against the idea, but after Barry convinces him, he agrees. Cold does however require something in exchange for his services. Since what he originally wanted from the Flash was “impossible” (we don’t know what it was that he asked for) he has a different form of payment; he wants all the records of his existence to be erased from the CCPD. Barry agrees to the terms, much to Joe’s dismay, and the team-up of the Flash, Captain Cold, and the Golden Glider is now underway. 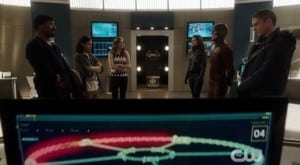 Cisco uses a gas to knock the meta-humans out and lead them to his uncle’s truck which he cisco-ed into mini containment fields which neutralize their powers. Once they arrive Captain Cold makes a comment on how he thought Ferris Air was shut down. The Flash responds with, “It was, one of their test pilots crashed about a year ago.” This is a direct reference to the Hal Jordan Green Lantern! Knowing what good friends the two superheroes are in the comics, I sincerely hope they bring in the character sometime in the future.

It doesn’t take long for things to go wrong, the meta-humans re-gain their powers and break free of the truck! Weather Wizard uses his powers to take down the plane from Argus in a stunning display of CGI, thanks to the special effects department.

Most of the meta-humans engaged the Flash and the Rogues, but Peek-a-Boo teleported away. The Flash knocks out the Mist with his new air suction technique and Captain Cold kills Deathbolt with his cold gun. Weather Wizard strikes the Flash with lightening and prepares to finish him off, but he is stopped by Captain Cold. Weather Wizard and Rainbow Raider are set free by Captain Cold. It turned out that he was the one who tampered with the truck and took the opportunity to make some meta-human allies. Captain Cold and Golden Glider leave the Flash knocked down on the floor to wallow in the self-pity of his failure.

Back at S.T.A.R Labs, Barry sits in the particle accelerator, feeling insecure about the kind of hero he is. Joe gives Barry a call to action, letting him know that his caring nature is what makes him a hero and that he shouldn’t try to be like the Arrow or anyone, for that matter. Then, Cisco announces that the particle accelerator is turned on and Eobard is standing right outside of it! The Flash goes out to confront Eobard, and questions him as to why he needs the particle accelerator. Eobard offers to show Barry, but he declines. The two prepare to face off when suddenly Firestorm comes on to the scene, followed shortly by the Arrow! 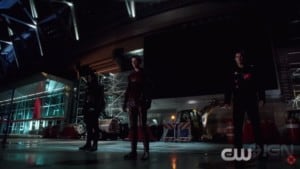 The fight that ensues is epic. Arrow slows Reverse Flash down with Ray Palmer’s nanotech technology that was inside one of his arrows. The two fight one another at regular speed until Reverse Flash gains his super speed once again. He almost kills Oliver but the Flash comes and knocks him away. The Flash lures the Reverse Flash to the roof of a building and has Firestorm fire at RF, causing him to fall off. When he lands the Arrow hits him with another arrow filled with tranquilizer.  The Reverse Flash is unconscious and the three heroes stand above him in victory. Oliver says his goodbyes, but not before saying that he may need a favor from the Flash in the future. The two heroes leave and the Flash caps off the episode by telling Reverse Flash that he finally got him.

This was an incredible episode which featured a large number of guest appearances, excellent special effects, and the feeling of satisfaction after a long season. It’s hard to believe that this isn’t the season finale. But there is one more episode left in this 1st season of The Flash, and it promises time travel along with a preview of the new CW show Legends of Tomorrow. ‘Til then, Flash Fans!

-For more about the Flash, including reviews of previous episodes, click here!