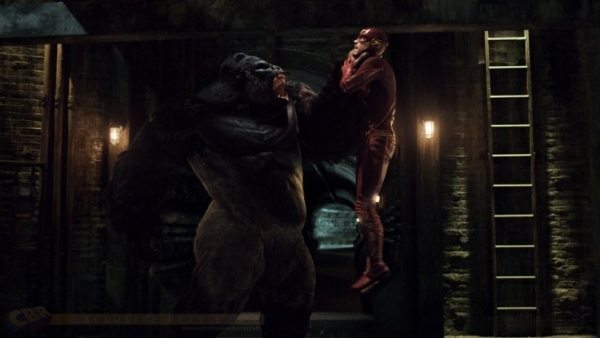 The episode begins with Iris asking the audience to think about their best friend, and to imagine that they kept a huge secret. This talk of betrayal ties into her feelings towards Barry and her father from keeping their secrets from her this whole season. The Flash has been searching for Eddie for the past two days but hasn’t had any luck finding him. Later on in the episode, a mysterious man dressed in a golden armored suit robs Central City’s gold reserve. The Flash arrives on the scene to stop “Gold Finger,” then he suddenly suffers a psychic attack.  He sees visions of being tortured by scientists. After Gold Finger recovers from the psychic attack, he takes this opportunity to get away with the gold. 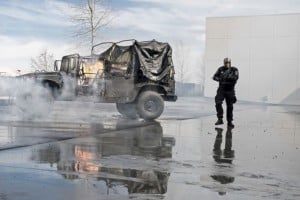 Back at S.T.A.R Labs, Caitlin and Cisco explain to Barry that the person who he is facing must be a meta human with psychic abilities. Iris walks into S.T.A.R Labs and sees Barry unmasked while still in costume, and reveals to him that she knows he is the Flash. Barry brings her up to speed on what is happening; Eddie knows that he is the Flash, Harrison Wells is the Reverse-Flash, and he was the one who killed his mother. He also accidently reveals that it was Joe’s idea to keep his superhero identity from Iris. This causes Iris to become infuriated at her father as she storms out.

While in her office at the newspaper company, Joe comes in to try to explain himself to Iris. She cuts him off to express anger that he knew how Barry felt about her and didn’t say anything. Leave it to the CW to bring this romance into the episode. How she brought it up felt very out of place with all that was going on. There were far greater concerns than Iris trying figure out her feelings for Barry- one of them being the fact that General Eiling has returned as the armored man stealing gold. They take him back to S.T.A.R Labs for questioning, but he appears to be completely brain-dead. When Barry attempts to talk to him, he says that Eiling is bad and that he hurt Grodd. Grodd is using Eiling as a puppet, communicating to the Flash team through him.

Cisco and Caitlin explain to Barry that Grodd was a gorilla who was an experiment at S.T.A.R Labs 5 years ago. When Dr. Wells discovered what Eiling was planning on using Grodd for, he cut ties with him. After the particle accelerator explosion, Grodd escaped his cage, and no one has found him since. Iris does another impromptu entrance claiming that she knows where Grodd is. Based off reports of the many disappearances in the sewers Joe, Barry, and Cisco head down to try and find Grodd.

While the boys are in the sewer, Caitlin updates Iris on Ronnie’s transformation into Firestorm. Once the trio get close to Grodd, Barry is mentally attacked, once again leaving him unconscious. Grodd takes this opportunity to kidnap Joe! Once the the two are alone Grodd communicates with him telepathically, and he even makes Joe point his own gun at himself! However, Grodd stops because his “father” doesn’t like guns. Joe asks where Dr. Wells is and Grodd says that “father” isn’t here. 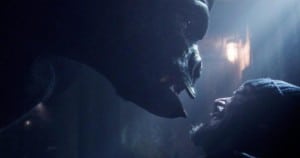 At S.TA.R Labs, Cisco and Caitlin are struggling to come up with a way to help Barry block Grodd’s psychic attacks. Iris is frustrated at the situation and leaves, but not before Barry tells her not to be mad at Joe because he agreed to keep Barry’s secret from Iris. He also shifts her argument of “friends don’t keep secrets from one another” with the retort that she wasn’t honest about her feelings for him. Could we just get those two together already so we can end this whole “will they, won’t they” nonsense? It’s only been one season, and I’m already tired of it.

Eventually, Cisco and Caitlin create a psychic shield for Barry to use in his fight against Grodd. By using the steam in the sewer, Cisco lures Grodd out and puts him in the perfect distance so Barry can land another supersonic punch! The Flash charges towards Grodd, but the punch fails.  Thankfully, the device is successfully blocking Grodd’s psychic attacks. The Flash tries some super speed punches, but they are ineffective.  Grodd grabs the Flash and throws him through a brick wall! The device breaks, leaving the Flash vulnerable to Grodd’s psychic attacks. Iris does a call to action to Barry, which gives him the needed strength to break free from Grodd’s hold. The Flash is ready to engage, but moves out of the way to allow a nearby train to smash into Grodd!

At S.T.A.R Labs, Eiling regains his consciousness and reveals that he knows that Barry is the Flash, and that the two of them have common enemies; Reverse-Flash and Grodd. Once he leaves, Barry talks to Cisco and Caitlin, assuring his friends that they will find a way to stop Grodd and Reverse-Flash. Barry then meets up with Iris again on the roof where she first met the Flash, and she hints that after they rescue Eddie she is unsure of where their relationship will go.

The scenes with Eobard and Eddie in Eobard’s secret hideout offered the most in terms of plot development. Eobard reveals to Eddie the article of the future and points out that Iris marries Barry in the future. He also states that Eddie is the only Thawne to not have a record in the history books, which could mean that Eddie doesn’t need to stay alive in order for Eobard to be born!

The episode ends with Eobard leaving his secret room to go up the ladder after saying that he has the key. Once he is on the second level he uses the device (the key) and injects it into a compartment. Lights begin turning on revealing a massive hallway. The final lines of the episode are from Eobard Thawne saying; “Time to go home.” While I didn’t particularly enjoy romance portions of the episode, the fight scenes between Grodd and the promise of seeing more of him in the future really saved this episode for me. Next week Barry teams up with the Rogues and ultimately the Arrow and Firestorm! So much excitement awaits us.  ‘Til then Flash fans!