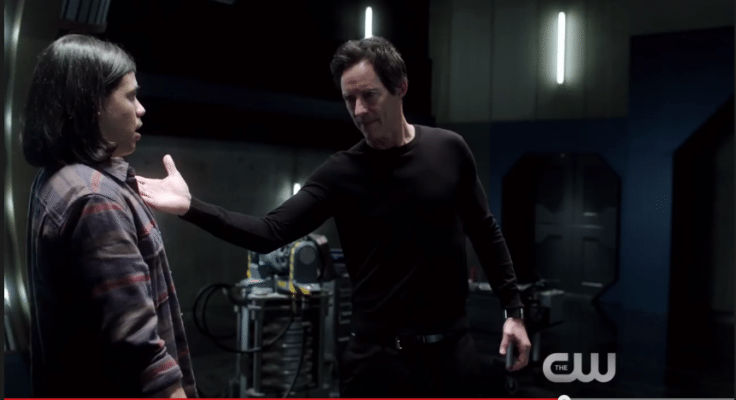 The Flash Episode 20 Recap- Spoilers Ahead

The episode begins where the last one left off; Barry, Caitlin, and Cisco are in the ‘time vault’ reading the article from the future. 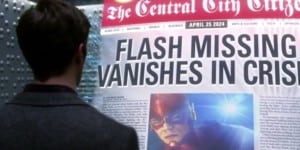 From the future article, several new developments for the future of the Arrowverse are discovered. The article was written by Iris West-Allen, Arrow will eventually use the name Green Arrow, and the Red skies were caused by the Flash and Reverse-Flash fight. After reading the some of the article, Cisco inadvertently activated Gideon, the A.I that informs Harrison Wells on the future timeline, and the group learns that Barry was the one who created Gideon! Cisco gets an alert from the tracking device he implanted in Dr. Wells’ chair that Dr. Wells is in S.T.A.R Labs and en route to the time vault. The trio manages to escape before Wells arrives, but before they leave they make sure Gideon promises not to tell Wells that they were there and she agrees.

The three are at Joe’s house, where Cisco informs Eddie that Barry will one day travel back in time and battle with the Reverse-Flash on the night his mother was murdered. Barry reveals to everyone that he already went back in time a few weeks ago to stop the tsunami caused by Weather Wizard. He deduces that the nightmares that Cisco has been having are actually memories of the alternate timeline where Dr. Wells kills him. So the group decides to help Cisco lucid dream so he can experience the dream once again and fully remember what happened in the alternate timeline. At S.T.A.R labs, Caitlin develops these special goggles that should allow Cisco to lucid dream, but is unsure of how to communicate with him while he is asleep. Hearing their conversation, Dr. Wells offers his help to improve Caitlin’s device and he is successful. They will be able to communicate with Cisco while he is in his dream state.

Barry, Joe and Caitlin perform the experiment on Cisco at Barry’s lab. While in his dream, the camera is shot differently than the rest of the episode, almost as if shot with a rounded glass. It really gave the scene the effect that what Cisco was experiencing was not real. Although Cisco panicked when dream-Harrison Wells was killing him again, he still managed to get all the information to the rest of the group; the Reverse-Flash captured in the bunker was just a hologram, Harrison Wells’ is really Eobard Thawne (from now on we shall refer to him as Eobard), he killed Nora Allen, and his original target was young Barry Allen. Harrison Wells calls Barry, informing him that there is a fire nearby. The Flash heads to the scene and with Harrison Wells’ instruction, he is able to put out the fire. This scene was meant to signify how close Barry feels with Dr. Wells, and how much it hurts him that he is the man who murdered his mother.

Then Barry has the idea to set a trap for Eobard Thawne- recreate the scene when Cisco discovers the truth about the Reverse-Flash. This time they prepare themselves for Eobard and Cisco redirects the force field that was originally created to trap speedsters now will prevent one from coming in. Caitlin sets the bait and sends Eobard down to the bunker where Cisco is “discovering” the Reverse-Flash’s secret for the first time. Hiding nearby are Barry and Joe, waiting to hear a confession so that Barry’s father may be sent free.

Unfortunately, when Eobard manages to break through the speed barrier and appears to be preparing to jab Cisco’s heart again, Joe takes the opportunity to shoot him. Barry tries to catch all the bullets but fails to catch one and that bullet ends up killing Eobard Thawne. Now distraught, Barry begins to give up hope that his father will ever get out of jail, until suddenly Eobard Thawne changes into Hannibal Bates! It was all a trick, Eobard knew that Barry and company were planning to trap him so he sent Hannibal Bates disguised as him in his place. Eobard talks to the Flash Four with a loud speaker on a bridge far away from S.T.A.R Labs. Barry pleads with him to turn himself in so that his father doesn’t have to be in jail anymore. Eobard refuses but he does promise that the two of them shall face each other very soon. Cisco tells Barry that Eobard is in the time vault but when Barry arrives it is only the wheelchair and several cameras that show all of the locations that the Flash Four had been this entire season! This immediately causes Barry to worry for Iris’ safety and he rushes over to her.

Now, at the beginning of the episode Eddie asks Joe for his blessing to make Iris his wife, and Joe refuses to do so on the grounds that he believes she and Barry were meant to be together. Eddie still plans on asking Iris to marry him on the same bridge as Eobard Thawne! Right before Eddie can pop the question, Reverse-Flash (RF) snatches the ring and then takes Eddie. The Flash arrives on the bridge and is told by Iris that RF took Eddie, and he promises to bring him back safely. Before running off to catch him, the Flash gives Iris a small electric shock to her hand, this reminds Iris of when Barry gave her an electric shock when he was in a coma. Iris finally learns that Barry is the Flash!

At an undisclosed location, RF takes Eddie and reveals his name and explains that the two of them are family. Except Eddie’s family has no knowledge of there being an Eobard Thawne b/c Eobard Thawne has not been born yet! Eobard calls Eddie his insurance, so long as Eddie stays alive there will be a Reverse-Flash. 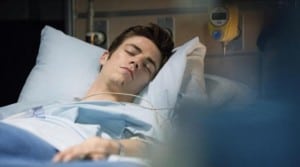 The final scene in the episode was a flashback to when Eobard had Barry at S.T.A.R Labs for the first time. He comments on easy it would be to kill him right there in his weakened state. He points out the irony of the fact that he went back in time to kill him Barry, but now in order to return home he has to create the Flash. Despite having been a protector and caregiver to Barry all through his youth, Eobard still resolves to kill Barry one day.

A solid episode which felt almost as a calm before the storm, granted a lot of information was provided to the characters and the fans. But now we get to see it all play out in these final episodes. Gorilla Grodd will finally have an episode next week entirely dedicated to the character and I’m excited to see him in all his CGI glory! ‘Til then Flash fans!