Barry Allen’s Force Quest continues in THE FLASH #61. In this issue, he helps Fuerza take down Cauldron, the corrupt police chief of Corto Maltese. Cauldron has a gauntlet which gives him the powers of the Sage Force. Unfortunately, this issue didn’t wow me as much as the prior parts of this story arc.

Joshua Williamson makes a choice I’m not a big fan of regarding Fuerza. The payoff to her story seems to wade into some murky waters, coming dangerously close to seeming like a negative stereotype. While I liked the other parts of this issue, the majority of it focused on Fuerza, a character whose potential seemed so great in the previous issue. However, that changes in this installment, in my opinion, for the worse. However, Christian Duce’s awesome art really makes Fuerza’s fantastic costume look superb.

Fighting to Save Corto Maltese in THE FLASH #61

In the last issue, Flash met Fuerza, a young woman from Corto Maltese who recently gained Strength Force powers. She’s more-or-less kept them in check, and has been using them to defend her people and her family from Cauldron, the corrupt new chief of police. He’s determined to rule the country with an iron fist but, in order to do that, he must kill Fuerza. He learns the location of her secret hideout and takes the fight there. In THE FLASH #61, Flash and Fuerza return to the base and find that Cauldron has not only taken her friends and family hostage, but he also has a device which lets him channel the Sage Force! 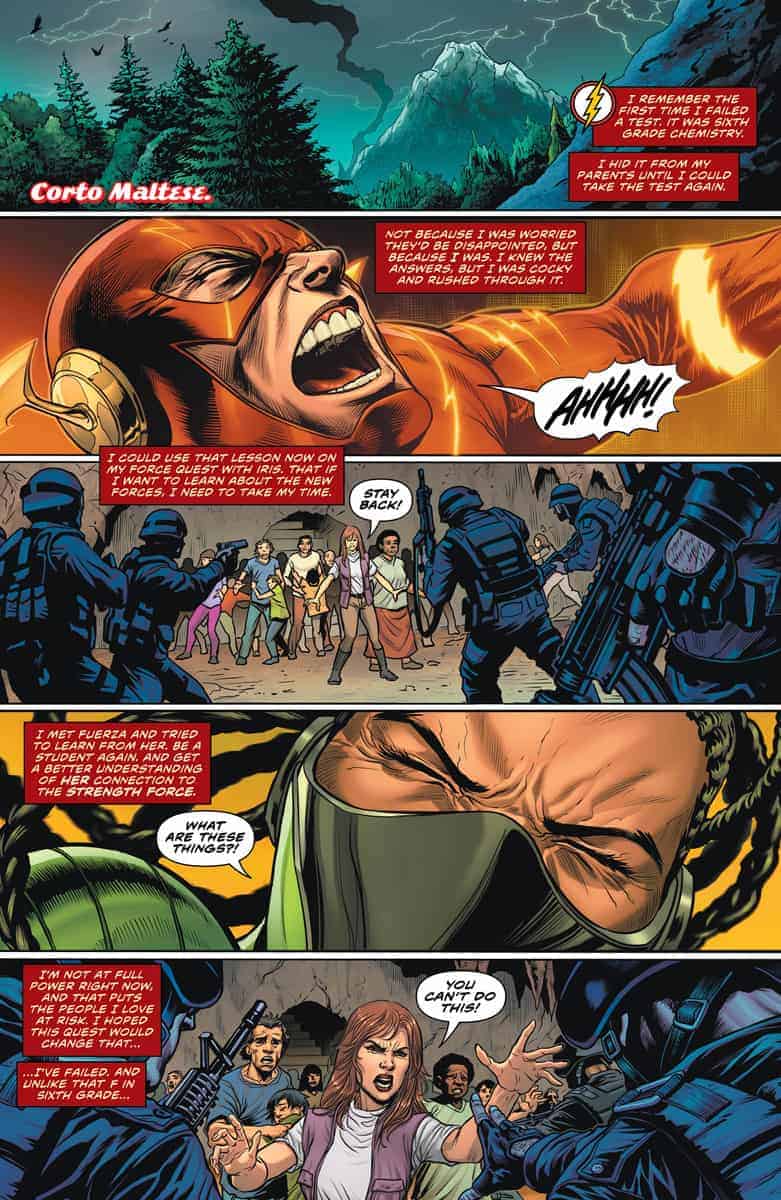 Said device allows him to make any of his enemies’ fears into a reality. In this case, it’s a bunch of angry goblins from a drawing which Fuerza saw as a child. Flash and Fuerza eventually learn how to defeat the creatures, which leaves Cauldron and his men. Fuerza, filled with rage, then goes after Cauldron. She smashes the device and is ready to kill Cauldron. The Flash attempts to stop her, which leads to a battle between the two.

Eventually, Fuerza’s mother calms her down, and Cauldron is taken by A.R.G.U.S. The damage is already done, though. Fuerza is convinced that Cauldron will return soon, and blames the Flash for stopping her. Their friendship seems irreparable, so Barry leaves with Iris to find the new Sage Force user. Where is the user, and what will he do when the Flash meets him? Read THE FLASH #61 to find out.

An Unfortunate Change for Fuerza in THE FLASH #61

Those who read my review of the previous issue of this series would know that I was a big fan of Fuerza’s debut. She seemed like a promising new hero with interesting powers as well as a great backstory and personality. I even hoped she’d get her own series or miniseries. Unfortunately, THE FLASH #61 lessened much of my initial excitement for the character. I’m not a fan of how Williamson portrayed her this issue. In the last issue, she seemed to have a bit of anger under the surface, but was able to control it and use it to make her connection to the Strength Force greater. I hoped that there wouldn’t be an obligatory “character who keeps control loses it” moment this issue. Well, there was. If she only momentarily lost control and the Flash was easily able to calm her down, that would have been fine.

However, instead, she doubles down on the anger and becomes a Hulk-like monster who thinks with her muscles and attacks the Flash. Even when she eventually calms down, she stays incredibly cynical, which seems, to me, different from how she acted in the previous issue. There are a few problems with this. For one, it gets dangerously close to portraying Fuerza as a stereotypical “angry Latinx woman.” That’s a really rough stereotype that’s still being used, albeit with less frequency, in the media today. Her anger might be justified, but it still feels a bit too close to that stereotype. On top of that, the one thing I liked most about her character was that, for once, she seemed like a new hero who actually could control her powers and use them without anyone’s help. That didn’t pan out this issue, which disappointed me. Hopefully, she gets some redemption soon.

Stunning Art for Fuerza in THE FLASH #61

Duce returns to the book this issue to take over for Rafa Sandoval. Previously, I couldn’t praise enough Sandoval’s design and artwork for Fuerza’s costume. I loved every bit of it. In THE FLASH #61, Duce does the design justice, and then some. If anything, the costume looks even better here, with Duce’s more detailed artwork. It shows that it’s truly a great design, since it works in different art styles. I still love how unique much of the costume looks, the half-mask especially. Duce draws Fuerza in various action scenes, and each one makes her suit look amazing. Luis Guerrero’s color work also makes the green in her costume really pop in the dark, gray caverns where they face Cauldron. 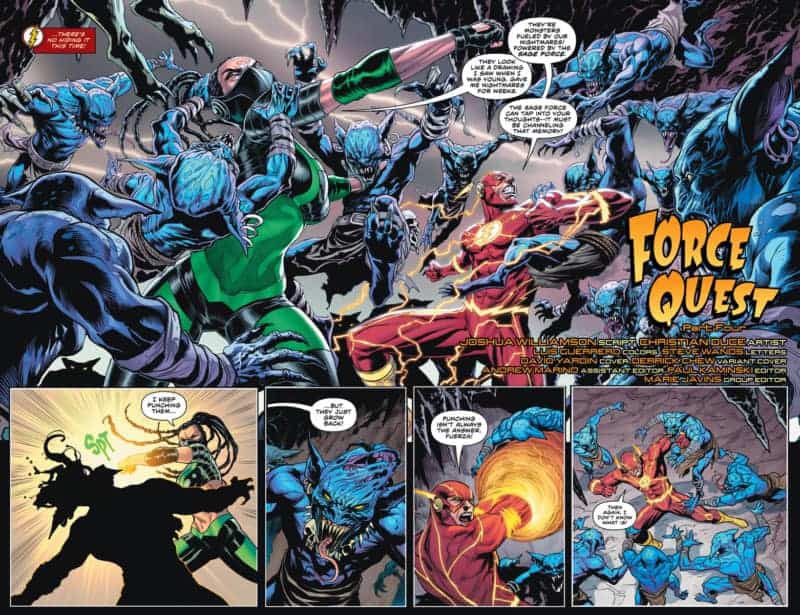 Unfortunately, THE FLASH #61 didn’t live up to my expectations. There were some fun scenes in the book but, overall, the portrayal of Fuerza really lessened much of my enjoyment of the book. The art, however, is fantastic!