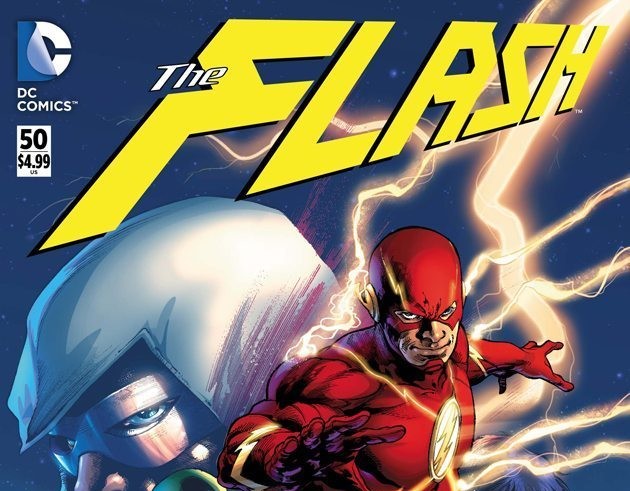 Over the last month, DC Comics has been sending the New 52 out with a bang before May’s REBIRTH, publishing double-sized 50th issues for all of the titles that have lasted long enough to reach the milestone. The most recent title to get the treatment was THE FLASH, scripted by writer Van Jensen with art from a cadre of pencillers and inkers.

READ: Catch up on the last issue of THE FLASH here!

The issue begins with Flash being arrested by several members of The Rogues (who were deputized by the Central City PD to hunt down the Scarlett Speedster) after a fight at Wally West’s school. After showing us the reactions of numerous supporting characters, including Henry Allen and Iris West, Flash is booked into Iron Heights Penitentiary. All the while, a mysterious villain is actually orchestrating the proceedings. 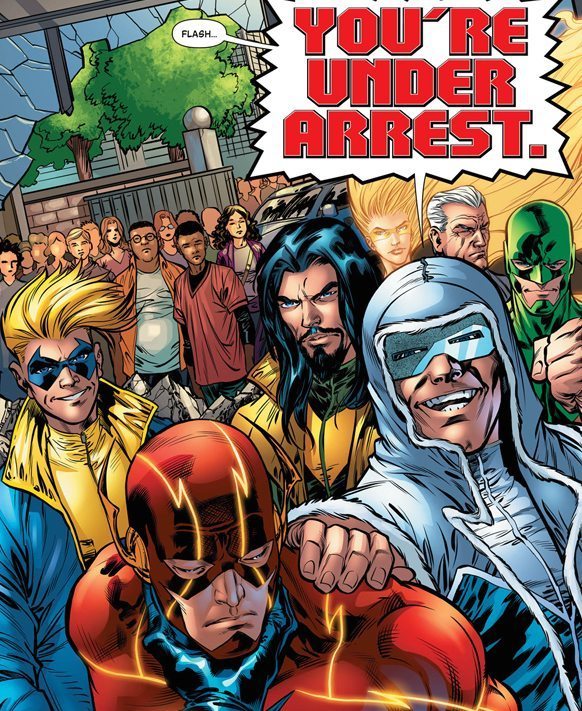 Flash’s stay at Iron Heights is short-lived, as the villains Girder and Overload attempt to free him thanks to a debt that Girder owes Henry. The Flash refuses their help, but the ensuing fight damages the prison’s electrical grid, inadvertently freeing the prisoners. After getting the guards to safety, Flash heads back to the city to find help but is instead once again attacked by the deputized Rogues before being finally confronted by the mastermind of the whole plot.

After the main plot concludes, the rest of the issue’s pages are taken up by a B-Story focused on Wally West. The story initially starts out lighthearted, displaying Wally’s newly developing powers affecting his success in gym class. However, it takes a serious turn when a version of Wally from the future urges him to embrace his powers. Emboldened by the words of his temporal doppelgänger, Wally uses his speed to embarrass a bully. 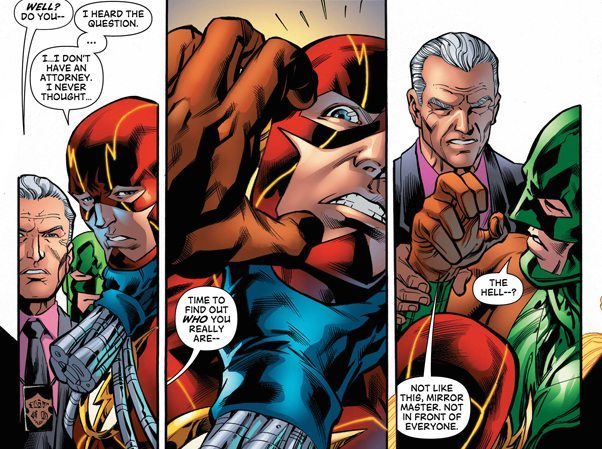 The principal story of THE FLASH #50 has its ups and downs. Jensen crafts a well-plotted read, however, the story itself has little substance to it. It’s mainly an action piece, with little to no character moments, perhaps best exemplified by the fact that Barry Allen never appears unmasked in the story. The involvement of The Rogues, both those deputized by the CCPD and those in Iron Heights, feels perfunctory. The biggest issue is the reveal of the main villain. It somehow comes off predictable and nonsensical at the same time and ends the story on a strangely abrupt note.

READ: Did you enjoy the SUPERGIRL/FLASH crossover? Check out our review here!

The art for the first story comes from pencillers Jesus Merino and Paul Pelltier, with credited inks from Merino himself, as well as Scott Hanna, Tony Mordos, and Wayne Faucher. Their characters and panel structures aren’t anything groundbreaking, but they work for the action heavy story being told. 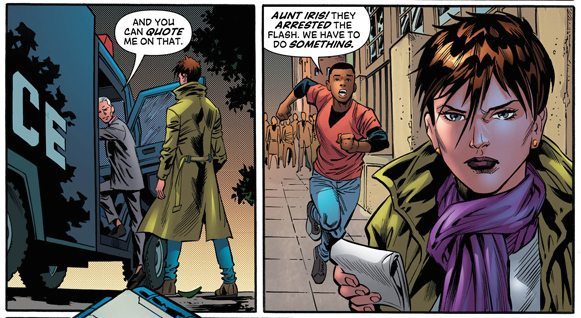 The B-Story, also penned by Jensen fares much better in my opinion. Like many DC fans, I’ve had a hard time adjusting to the New 52 Wally West, but I really like the way he’s portrayed here. Numerous layers of his persona, including overconfidence, fear, and compassion are all on display, even given the short page count. The story’s theme of “What would the Flash do?” in any given situation really helps get Wally’s character development across without feeling overly forced or preachy. The bright, cartoonish art from Joe Eisma also fits perfectly with the tone of the school-centric plot.

Of the DC Comics double-sized fiftieth issues released over this past month, THE FLASH #50 would probably fall somewhere in the middle of the pack. There’s nothing egregiously bad about it, however, there’s nothing all that memorable either outside of maybe the Wally backup story.