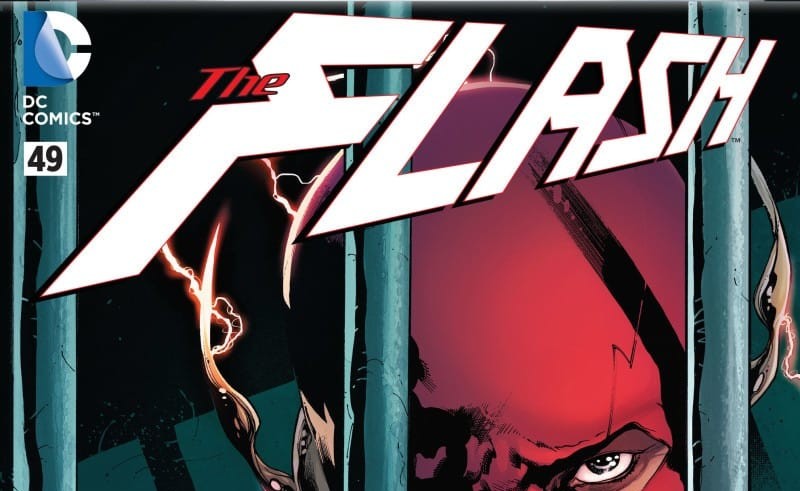 Despite being as old as he is, The Flash remains one of DC Comics’ most interesting properties. Where you can throw some divine imagery into Superman to pump him with story steroids, the same can’t be done for The Flash. Whatever tragedies you throw at him, he may be slowed, but he still races past it with a spring in his sprint. None of this makes The Flash any less compelling, though. FLASH #49 is pretty standard in most departments, but it shines in highlighting the qualities that define Barry Allen as The Flash.

Where it seems that there is increasingly an effort at DC to make the books more “mature”, the Flash run by Paul Venditti and Van Jensen consistently stands apart from this. DC has made a concerted effort to make Barry Allen into more of a tragic character, full of Shakespearean-level dramatics, but by nature, The Flash is not well-suited to this style of storytelling. For one thing, the majority of his cast of villains are a colorful, campy crew of alliterations with fairly simple motivations. Another is that Barry is too fast for it all; he doesn’t have the bandwidth to mope over a hero’s pressures for an extended period of time. 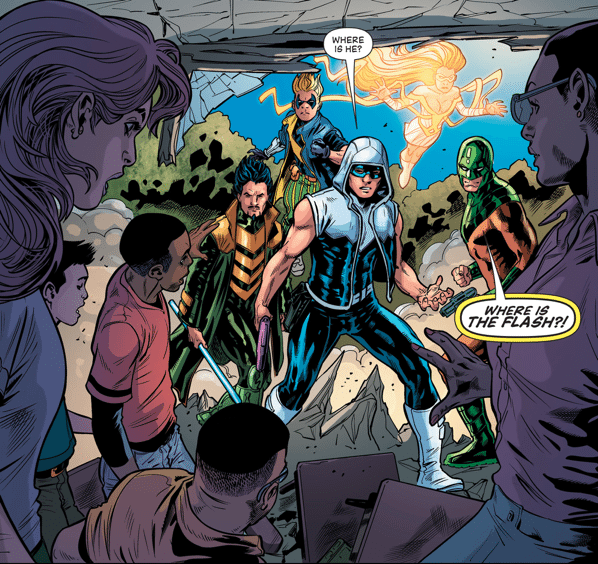 That dichotomy of direction is apparent in THE FLASH #49, an issue that for any other hero would seem scatter-shot. In THE FLASH #49, Barry is coming to terms with the fact that the tables have turned: Now, The Flash is an enemy of the law while the Rogues are deputies. Because of this, he is wrestling with the notion of deceiving the police and questioning whether his powers are, in fact, bad.

It’s the kind of heavy, existentialist stuff that DC has been pushing as of late, but nothing that writers Venditti and Jensen wade too far into. The story quickly moves to Wally West recognizing his own speedforce abilities before a showdown between Flash and The Rogues. As I said before, what would have read as rushed in another hero’s book instead reads as setting the story’s pace to its hero’s rhythm. Unlike Batman, Barry doesn’t brood or deliberate for extended periods. He’s always on the move, and Venditti and Jensen seem to be tapping into that same well of speedforce with their writing. 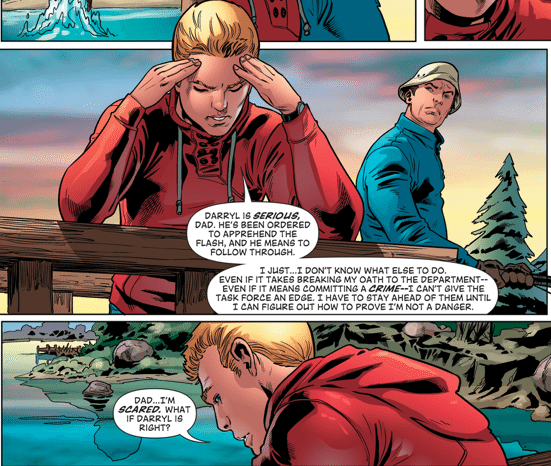 Assisting them on this is artist Phillippe Briones, whose art does a great job at capturing the same frenetic pop of the story. Someone like Alex Ross would feel out of place on this book, where highly detailed paintings would bog down the reader as they pause to admire his work. Instead, we have Briones and company, whose strong lines, bright colors, and conservative shading brings a sort of buoyant levity to the book that lets us bounce from one panel to the next. It’s vibrant, emotive, and always relentlessly fun to look at.

LISTEN: Hey! Slowdown, kick your feet up and have a listen to one of ComicVerse’s podcasts 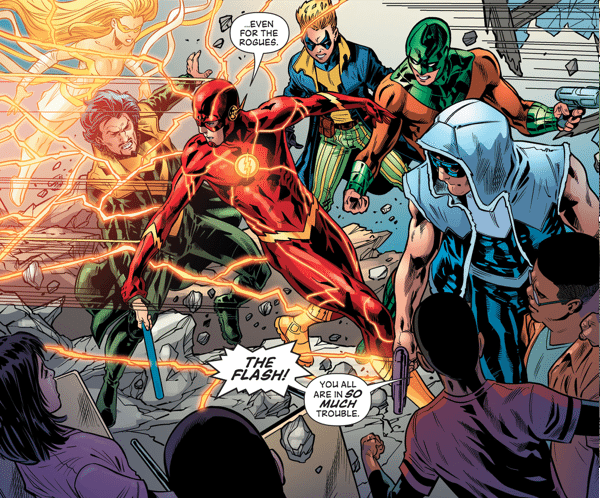 FLASH #49 doesn’t dawdle too long on sentiment or heroic inner-turmoil. Instead, the team knows that THE FLASH  is at its best when it keeps things equal parts heart-warming and humorous, not letting the story get too heavy-handed as a means to show off the writers’ skills. A Flash book can and should be dramatic, but not so much that it takes the place of the inherent fun of the character. What pulls you into a Flash story is that It doesn’t take itself too seriously, but it has just enough there to make you care. FLASH #49 does that. You care about Barry’s struggle, but like Henry Allen says in this issue before we can even linger too long on sympathy, he’s already gone.