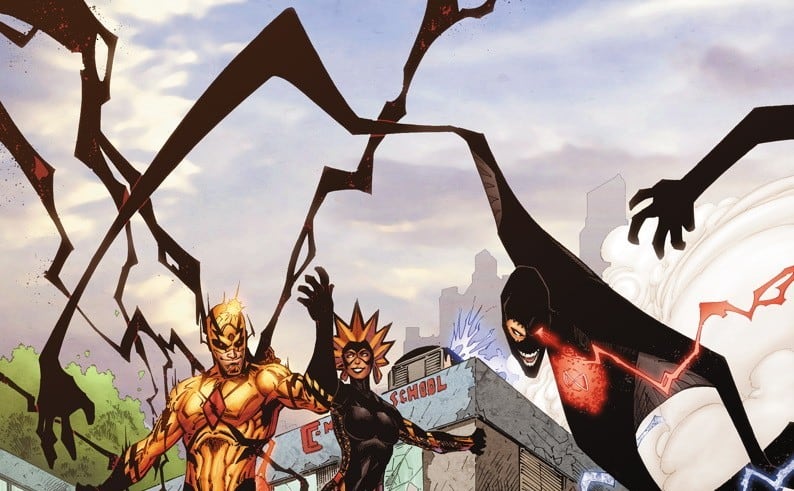 Who said DC comics lacked diversity?  With society being challenged and slowly, yet painfully evolving, people expect more representation of races, religions, cultures, sexuality and so forth.  The Flash has answered that call.  Barry Allen, The Flash, is your typical White male, but the new villains, such as Magali, Block,  Xolani (The Folded Man) aren’t.  Also, Barry has a strong relationship with  Wally West, the nephew of his girlfriend Iris West, who happen to African American, and quite frankly, the Flash comics have never shied away from biracial relationships. This particular universe or incarnation of Flash, happens to be even more progressive with a biracial gay couple, who Barry lives with.  In fact, one is a reformed criminal known as Pied Piper, while the other is the head of the Central City crime lab.

These interracial relationships are vastly important to the ongoing characterization of this comic.  The real accomplishment from the writers, Robert Venditti and Van Jensen, is using their humanity which overshadows their race in a positive way.  They incorporate problems that anyone from any race, or sexuality could have.  It proves and shows that skin color or lifestyle doesn’t matter in the grand scheme of life.  People deal with the same crap.  Barry shows up for Wally and his racing gigs because he wants him to have a strong male figure, something he can sympathize with due to having his own father incarcerated.  The couple of David (a Cop) and Hartley (Pied Piper) aren’t having fights because they are ashamed of being gay, rather David believes been seen in public will damage his career because of Hartley’s past of crime.  These are complex components to theses characters and add heavy stakes to the story.  It adds a compelling layer for the audience moving forward.

The characterization is prominent to the villains, as well.  Lead by Eobard Thawne, a group of six super powered individuals and a speed force scholar, look to kill The Flash, but first they must diminish his heroic status.  Eobard Thawne, the Reverse-Flash, convinces his gang that to simply kill him would only make him a martyr.  They must demoralize him to the point where The Flash shows his true colors, whatever they may be, and only then, when he is revealed as the true villain can they end him.  There has to be some complex background, we readers haven’t been privy too.  Thawne has murdered Barry’s mother, but he and his cronies have a vendetta.  Something has festered in them and it’s compelling to see where it goes.  The only thing that’s clear now is that the various powers the villains have, are product of the same lightning accident that gave Barry his speed.  We’ll just have to read on!

Between the complex emotional issues of both the heroes and villains, I give characterization a perfect 5 out of 5.

I have already heavily exposed the story through the characterization, but I’ll make it more precise as I evaluate it as a whole.  We left off last issue with The Flash facing off The Folded Man, Xolani, who can transport Barry anywhere he want when they come into contact. He leaves Barry in the ocean, which he barely makes it out of before drowning.  After the Flash makes his way back, the villains formulate their plan as mentioned above.  The Reverse-Flash attacks Barry’s dad, and we see the various interactions of the David-Hartley couple, and Barry supporting Wally.  Then Block and Roscoe take on The Flash.  With Block’s powers of atom movement/manipulation, and Roscoe’s control of centrifugal speed they form a huge dome within Central City.  When Flash tries to vibrate through it, his energy sparks the structure into a bomb.  During this interaction, Wally, who was nearby has a spark run through him, indicating he too has speed force powers.

This story with the help of a lot of intriguing character development was great.  There are a lot of dark elements and complexities within the characters.  The Flash comics have definitely turned more serious over the past decades and I believe that’s been really rewarding for the franchise.  The art reflects that, which I’ll get to after this rating.  I give the story a 4.5 out of 5 stars, mainly because I’m anxious for more questions to be answered!

The art by Brett Booth, Norm Rapmund, and Andrew Dalhouse is fantastic.  It’s incredibly detailed in the foreground and background.  The emotions and action sequences really pop because of this.  I also really enjoy the incorporation of the sharp, jagged, angled paneling.  To me they correspond with Flash’s speed perfectly.  Although, it did take a couple of issues to get used, I thoroughly enjoy it now.  I think one little issue I have is all the line work, particularly in the muscles.  It’s a bit overemphasized, but not that big of a deal.  The Art is 4.5 of 5 stars.

This was an excellent book.  I really hope the story and characterization continue these themes and developments.  I would like a little more from the villains, but I’m sure that’s coming.  The Flash #44 is a refreshing A.