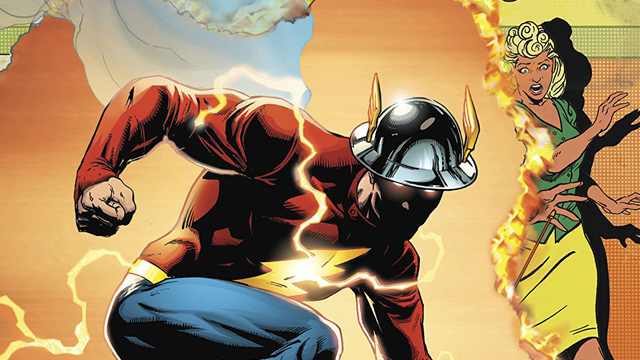 After three issues of incredible build-up, and a week-long delay, “The Button” part four has finally been released. Boy, was it worth the wait! In THE FLASH #22, Batman and the Flash’s race through the timestream finally reaches its end, as familiar faces appear, mysteries are unraveled, and the architect of DC Rebirth is (more or less) revealed.

The Flash #22: Major Spoilers Ahead 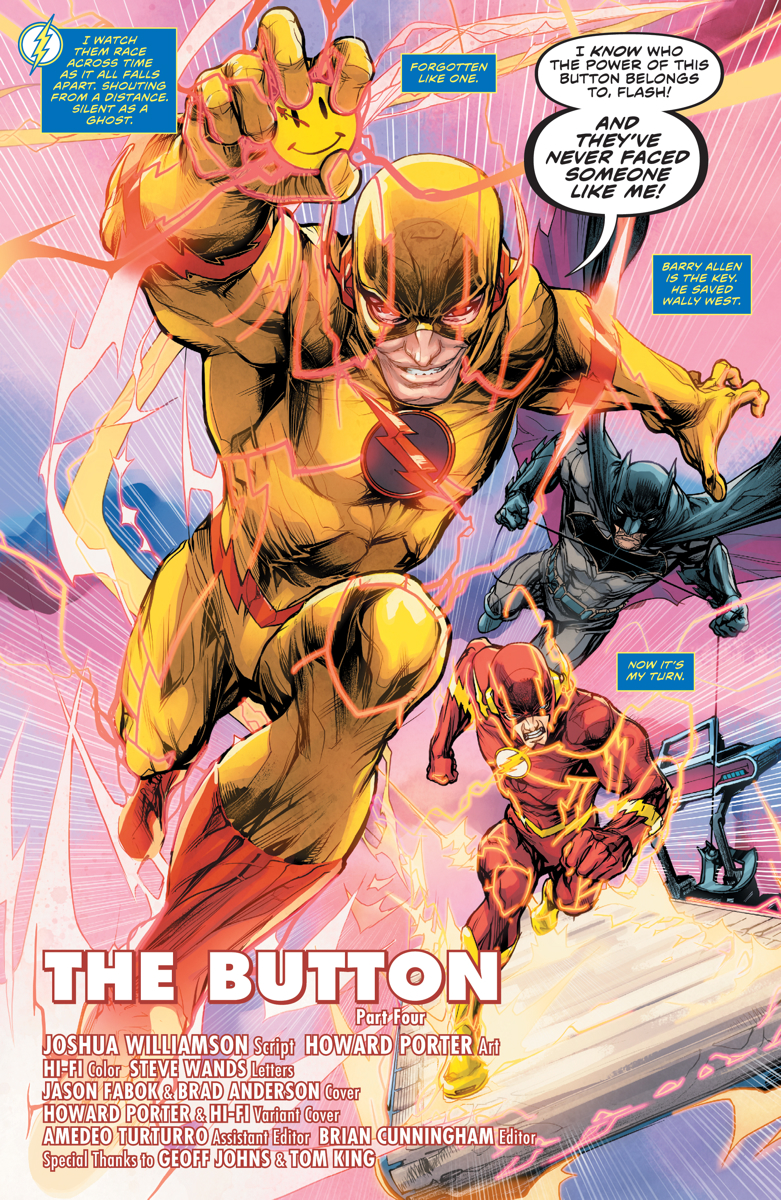 With the timestream folding in around them, Batman and Flash are in hot pursuit of Eobard Thawne, who holds the Button in his hand. With the two detectives unable to stop him, Reverse-Flash reaches the origin of the Button’s energy. This time we see his death play out, as he comes face to face with “God.” Meanwhile, Batman and Flash, close to being lost in the timestream forever, are rescued thanks to the re-emergence of a long forgotten Flash, Jay Garrick! Much like Wally West, Jay tries to return from the timestream. Unlike Wally, he isn’t successful. As Jay is sucked away by a big blue energy stream, Bruce and Barry are left to try deciphering what just happened… and what might lie ahead.

The Flash #22: Racing Against the Clock

What’s most immediately impressive about this issue is the sheer scope of it. The timestream race creates a reality-shaking suspense, which is magnified tenfold once the machinations of DC Rebirth’s architect are revealed. Writer Joshua Williamson gives us our first physical glimpse of Watchmen’s Dr. Manhattan and reveals the sheer horror of his power. Manhattan murders Thawne without hesitation once he’s discovered. Even more brutally, he rips Jay Garrick out of reality mere seconds after his return. We’ve seen the joy of Wally West escaping from the timestream. Now we’ve witnessed the horror of an escapee who’s been reclaimed.

READ: Relive the heart-breaking meeting between Bruce and Thomas Wayne in our review of BATMAN #22!

The effect is earth-shaking. Manhattan has been a lingering presence all along. Yet his immediate disruption of Jay Garrick’s meddling brings the blue god right to the forefront, both for the reader and for Batman and Flash. For the first time, the two detectives understand the real danger of the quest they’ve embarked upon. Manhattan is a foe unlike any they’ve faced, and now they know that.

The final pages of THE FLASH #22 make clear that Manhattan has moved from the background to the forefront of this overarching story. We see his hand emerging from above, picking up his Button (something I had really been hoping to see since “The Button” was announced). Even more tantalizing, the comic features a brief epilogue, in which the Button floats through space, before a zoom-in effect reforms it into the Superman symbol.

It’s a terrific cliffhanger, which teases the upcoming Superman & Dr. Manhattan meeting in the next (and possibly final) piece of the Rebirth puzzle, titled “Doomsday Clock.” Beyond a cool visual effect, the remolding of the Button into the Superman shield could also symbolize just how deeply Manhattan interfered with Superman’s essence. Perhaps there’s still more to be revealed about Superman’s identity than what we saw in “Superman Reborn.” 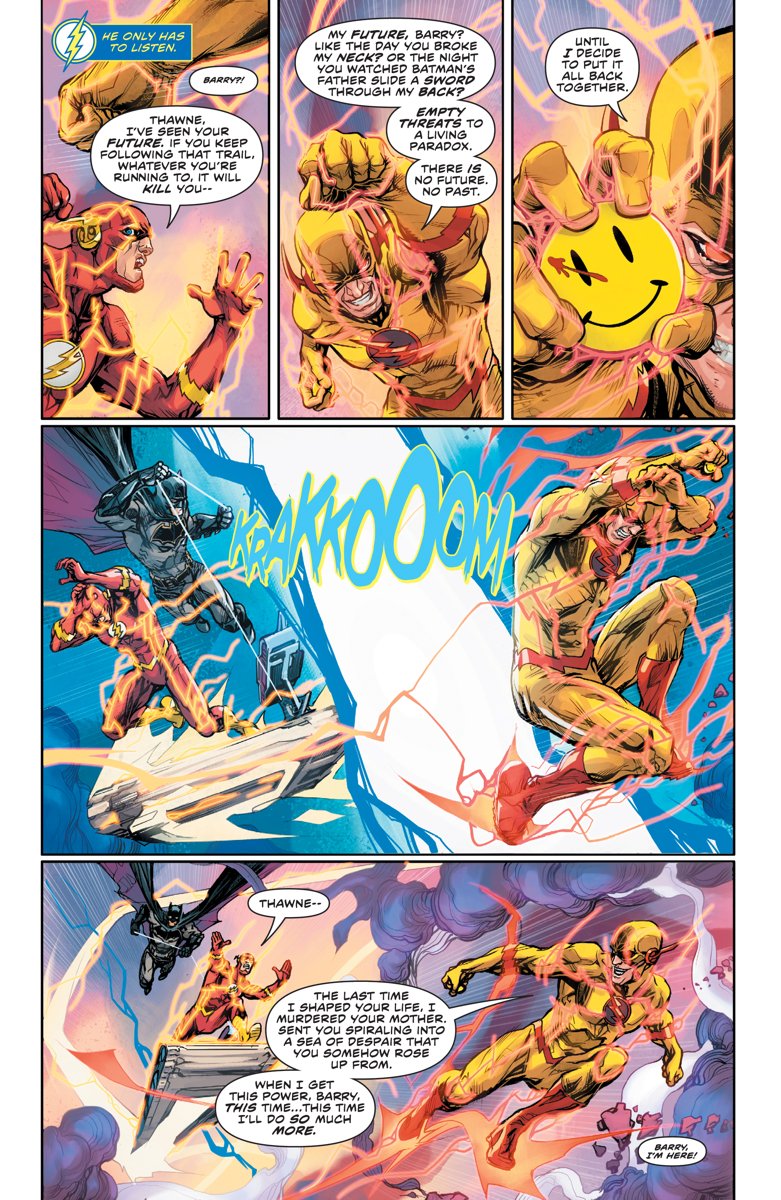 The one thing THE FLASH #22 doesn’t have is Red Robin. That’s significant because he’s featured on the cover. As the highest profile character torn from time, Tim Drake was expected to play some kind of role in this story. His presence on the cover could also be considered symbolic, but it’s a bit of an oddity to see him there. Truthfully, I think Red Robin would have been an unnecessary inclusion anyway. Eventually, Tim’s imprisonment will need to be dealt with. Yet for this issue, everything within unfolds gloriously as is.

The whole “The Button” four-part tale has been an artistic masterwork. Each issue was a puzzle piece, with its own unique design. The first part emphasized heart-stopping action, with Thawne’s brutal attack on Batman. The second part focused on characterization, with Bruce and Barry putting their detective skills to the test. The third part utilized sheer emotional resonance, with Bruce and Thomas Wayne’s fateful meeting. This fourth part, finally, emphasizes scale, magnitude, and impending doom. It fits the pieces of the first three parts together, filling in the blanks and allowing us a chance to step back and to view the game board from above — from Manhattan’s point of view.

READ: Experience the heart-stopping action of the issue that started it all in our review of BATMAN #21!

The Flash #22: Strokes of Manhattan

Howard Porter’s artwork contributes to the issue’s grand sense of scale. He utilizes the panel space expertly, making use of many smaller panels to emphasize the passage of time. This works particularly well when Bruce is standing at the window of Wayne Manor, pondering the Bat-Signal. Bruce barely moves for the entire space of the page. Yet, as he considers his father’s request to stop being Batman, his immobility says everything we need to know. Porter also uses two full-page panels to great effect. The first is the triumphant return of Jay Garrick, emerging from the time force in a burst of warm yellow energy. The second is his banishment back to the timestream in a similar burst of cold blue energy. The panels happen only a couple of pages apart, and act as mirror images of one another, in both color and symbolism.

Overall, Tom King and Joshua Williamson’s collaboration on “The Button” has been a masterful achievement. Each part represented a unique component of storytelling — action, character, emotion, and magnitude. Taken together, the issues combine to form a comic series that runs the full spectrum of comic book excellence. It’s one of the best series I’ve read. “The Button” could be just a prelude to something even more powerful yet to come. THE FLASH #22 marks the beginning of the end. The Doomsday Clock has begun to tick.