THE FLASH #21 follows the brutal, harrowing action of BATMAN #21. The story maintains excellent pacing while refocusing its energy on the plot for part two of “The Button.” It doesn’t quite contain the heart-stopping thrills of part one. However, it does feature excellent detective dynamics for the Flash and Batman. The duo tries to put together the mysteries of the button’s radiation and Reverse-Flash’s trip through time. It all builds to a fantastic climax, with a twist that promises what could be one of the greatest Batman stories of all time.

Warning: Massive Spoilers for THE FLASH #21 Below! 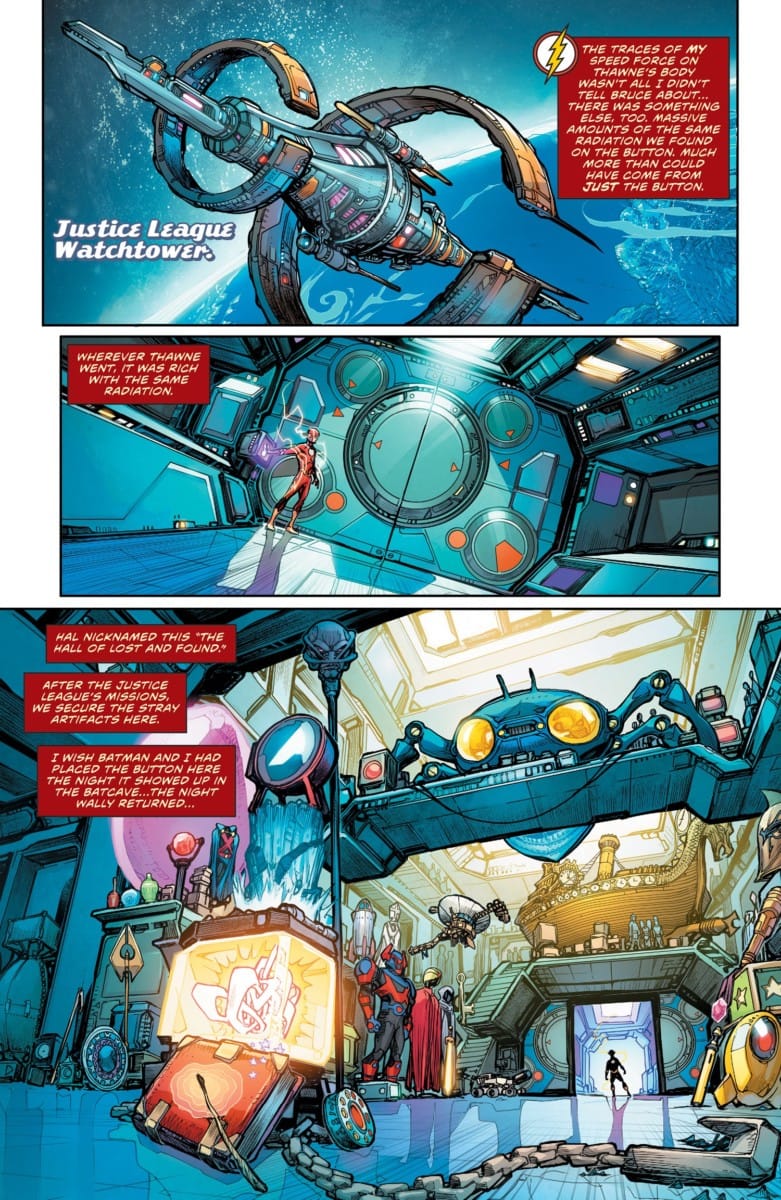 “The Button” part two begins with Flash attempting to figure out how Eobard Thawne wound up dead. After a discussion with Batman, busy recovering from Thawne’s brutal attack, the Flash speed-sneaks to Justice League Watchtower, where he prepares to use the Cosmic Treadmill. He intends to follow Reverse-Flash’s radiation signature through time, to try to solve the mystery of his death. Batman, always quick on the uptake, follows Flash to the Watchtower. He insists on coming along for the time-journey, despite the obvious dangers to a non-speedster. The two warp through time, passing by a few intriguing images of themselves in a missing timeline, before winding up back in the Batcave… where Bruce comes face to face with his father, Thomas Wayne, as Batman!

READ: Discover how the mystery of “The Button” began in our review of BATMAN #21!

This return to the Flashpoint timeline was teased last week with Thomas Wayne’s brief appearance to Bruce. I had a feeling that an epic meeting between father and son would take place eventually, but I didn’t expect it to happen the very next issue. This is a meeting literally 75 years in the making, and the emotional ramifications for Bruce should be enormous. One look on his face on the very last panel says it all.

Elsewhere in THE FLASH #21, it’s a lot of fun to follow Flash’s narration, which guides us through his detective mind, putting pieces together from the Button’s mystery. Writer Joshua Williamson’s plot proceeds rather simply and directly. Not a lot really happens if we’re to count how it progresses from Point A to Point B; Flash examines Thawne’s body, talks to Bruce, heads to the Watchtower, travels back in time with Batman, and winds up back in the Flashpoint. Though the steps are simple, the narration fills the story with puzzle pieces, as Flash tries to put it all together. 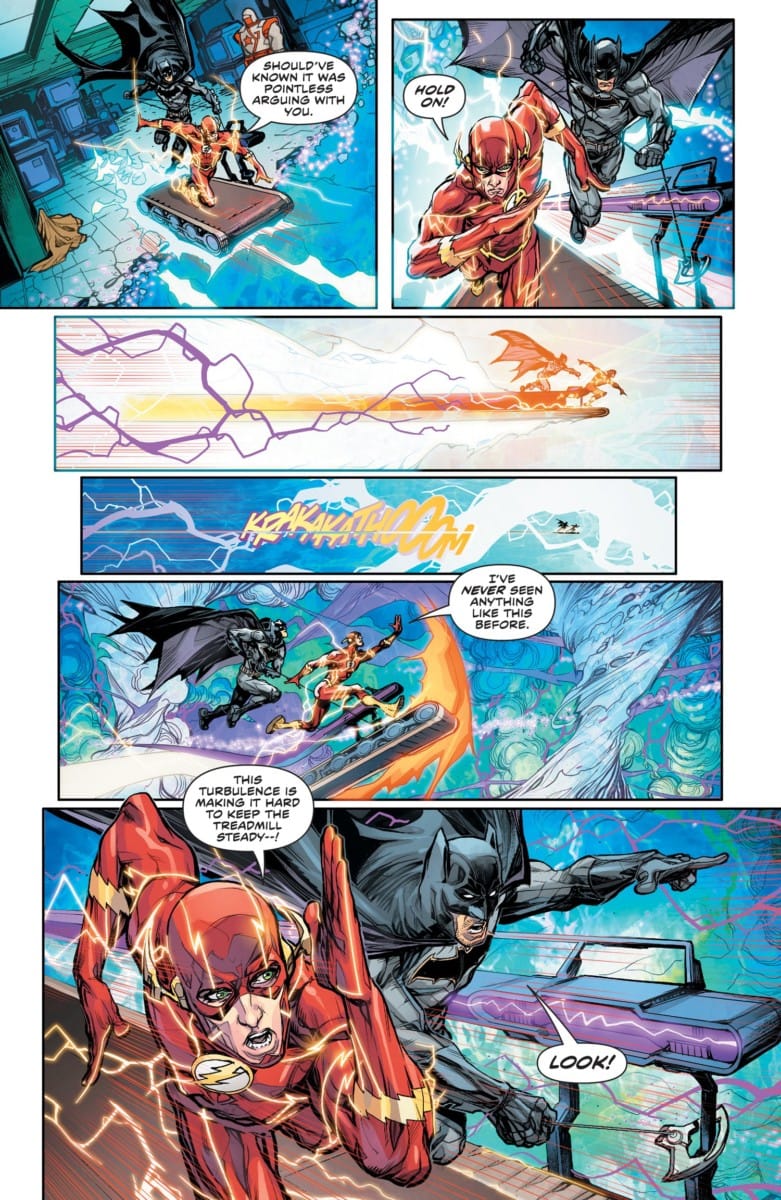 It’s also highly enjoyable to watch Batman and Flash’s interactions, which make up the bulk of the issue. As Flash is quick to point out, he and Bats are the only two members of the Justice League with the minds of detectives, and they get along in a way the others don’t. It’s rare that we get to see Flash and Batman interact so much, and it makes for a terrific treat. Flash and Batman’s personalities are opposites, but their interests are the same. It’s a formula that makes for the greatest odd couples, and the interactions here are no exception.

WATCH: Find out more about the future of THE FLASH comics in Episode 9 of our Weekly Comics News Show!

Howard Porter’s artwork compliments the mood of the story, with vivid, intricate designs mimicking Flash’s speedy energy. He has a lot of fun in particular with the speed force, as depicted through waves of light and a broad spectrum of colors (courtesy of Hi-Fi). In particular, the blue color probably emphasizes the workings of Dr. Manhattan. Porter also gets to draw past visions of the Justice League in classic Silver Age style. The art invokes plenty of mystery about who and what we’re really seeing. Flash claims it’s their forgotten memories. However, the artwork is just off-kilter enough to make us wonder whether Flash’s assessment is accurate.

THE FLASH #21: The Bottom Line

All in all, THE FLASH #21 builds on the colossal clash of BATMAN #21 with much less action, but a lot more plot. Williamson successfully takes the baton from Tom King. He pushes the story in a fascinating direction. The setting up must be a hell of a task for the Batman writer. With BATMAN #22 covering the first ever genuine meeting of an adult Bruce and Thomas Wayne, King certainly has his work cut out for him.