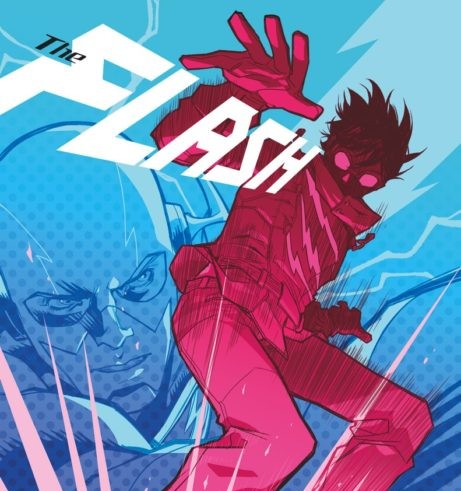 Rebirth has been all about setting a new path forward for the DC Universe following the one-off in May. Since then, we’ve seen some bold new directions for DC’s pantheon of heroes. Wonder Woman has a new origin that has her retracing the past she thought she lost. Superman is quite literally an older version of himself, but by placing him in the current timeline, he gets a new story to embark on. It seems as though when Geoff Johns announced that they were restoring the DC legacy, he wasn’t kidding. It’s pretty much all there in some capacity. That doesn’t mean that they’re regressing, though; Rebirth is about interpreting what DC was in light of what has happened in its timeline since The New 52. This is true for no one more than The Flash.

READ: Race into The Flash with our Flash Essential Reading list!

The Flash family are directly tied to the events of Rebirth with Wally West being the catalyst of the whole initiative. Barry Allen’s been affected too, though. He’s learning to absolve himself of the blame he put on himself for causing Flashpoint, and also now learning what it means to be a part of the family again. In essence, Barry is learning about his own legacy.

In THE FLASH #2, Barry has to deal with a friend and coworker, August Heart, who has suddenly been struck by lightning and given speed force abilities. What we wind up with is Barry reclaiming his place at the head of the Flash family as a mentor to August while he also learns to make sense of his newfound abilities. It’s truly heartwarming to see Barry Allen coming into himself again and, in a meta sort of twist, recognizing it in real-time. Joshua Williamson and Carmine Di Giandomenico are a great collaborative team and take some breaks from the speed force crash course to give us moments of introspection from Barry. These moments, no matter how brief, are the moments that count in this issue. Rebirth and Barry’s new direction are only the beginning and glimpses into his headspace are great nuggets to latch onto for us.

LISTEN: The New 52 may be over, but Scott Snyder’s BATMAN was consistently great. Listen to Episode 67 of the ComicsVerse podcast as we dissect The Caped Crusader!

The art continues to be sublime. Giandomenico has a great art direction that fits the tone of THE FLASH; there’s movement. The entire issue feels kinetic and alive. Even at the slower points, that energy is still there bubbling just under the surface waiting for the action to resume again, so it can explode to life. The colors maybe not as bright or vibrant as they could be, but they don’t pose too much of a problem or take you out of the issue. It could also be seen as a strategic choice given that the added energy from a brighter color scheme may be overwhelming, and the muted colors keep “the speed force effect” in check.

There’s a lot to love about THE FLASH #2. Williamson and Giandomenico are a great team that not only have a good understanding of where Barry Allen has been but also of where they want to take him. Great writing paired with original art direction give new life to an old character like The Flash, and it’s exciting to see where things will go from here.