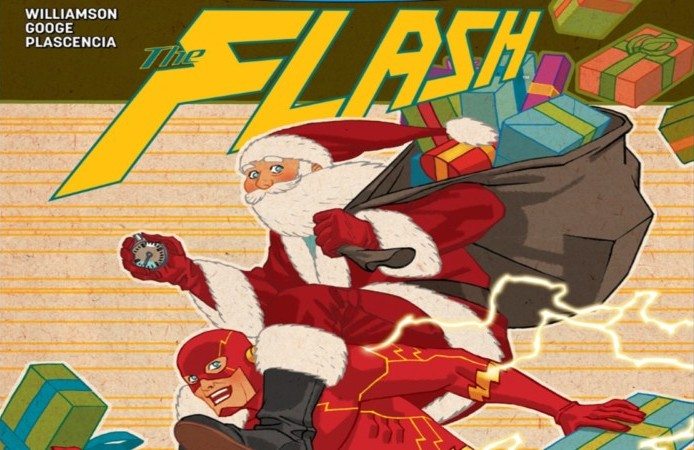 Even superheroes need a break once in awhile and, in THE FLASH #13, Barry decides to take one. While Barry goes on a date with Iris, Kid Flash takes it upon himself to protect Central City. Can Wally keep his city safe without the Flash’s help?

READ: Take a look at our review of the conclusion to THE FLASH’s “Speed of Darkness” arc!

The issue starts off with Kid Flash narrating the situation as he stops several crimes throughout Central City. Meanwhile, Barry is on his date with Iris, which starts off rather awkward. Eventually, they both realize there’s an attraction between the two of them and decide to pursue a relationship. Back to Kid Flash, he stops Tar Pit from robbing a toy store. However, Tar Pit explains that he needed the money to pay some thugs who kidnapped his dead brother’s kids. This prompts a sympathetic Kid Flash to save Tar Pit’s niece and nephew from their captors. Then he rushes over to Iris’ house. Barry and Iris arrive to see Wally with hot chocolate as thanks for welcoming him to their lives. The issue ends with Captain Cold acquiring mysterious plans and then freezing the provider to prevent him from telling anyone. 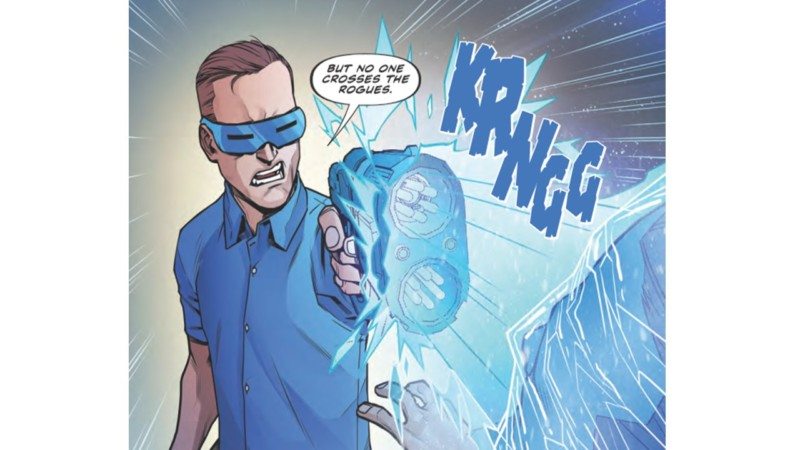 The main problems of THE FLASH #13 would have to be with the story itself. It was very cliché and predictable. For example, when Tar Pit was robbing a toy store it was clear that he had good intentions behind his crime. Tar Pit tried to explain that he didn’t want to fight and that the money wasn’t for him. Then, Kid Flash inevitably felt sympathetic and helped out the villain. Thus, leading to the lesson that everyone deserves to be happy during the holidays. However, writer Joshua Williamson manages to convey a surprising amount of heart in this issue. Despite its flaws, the story still conveys the heartfelt feeling of the holidays.

The warm and fuzzy feeling throughout THE FLASH #13 is all thanks to the characters. While somewhat generic, this story becomes much more entertaining thanks to the Flash family. The characters are definitely what make this issue work. Wally has come such a long way from the spiteful kid who hated Barry. They certainly aren’t best friends, but he realizes how much Barry means to Iris, and he’s starting to come around to him. One of the highlights of the issue was when Iris called Barry out on all the women he’s been with lately. Personally, I feel Barry needed to hear that. Now that he’s moved past his previous relationships, he can start fresh with Iris. 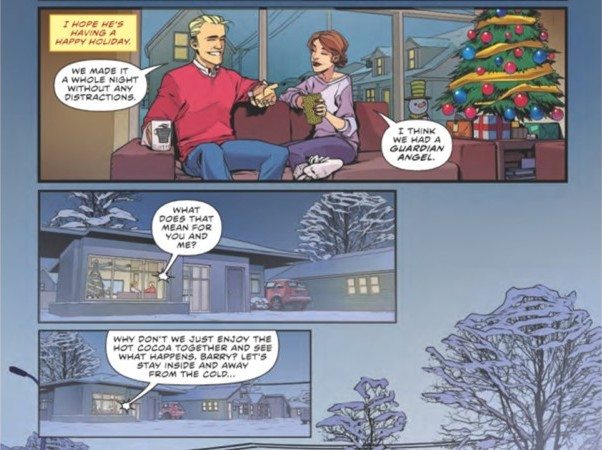 Not to mention the facial expressions, which artist Neil Googe draws exceptionally well. Readers can almost sense Barry and Iris’ uneasiness at the beginning of the date. There’s also the fight scenes between Kid Flash and Tar Pit. While the issue was low on action, when it delivered it really delivered! It was fast-paced, colorful, and exciting to look at. My only complaint is the lack of creativity when it came to Tar Pit’s fighting. His abilities allow for some creative techniques, like forming his body into hardened weapons or sliding around in liquid form to make better use of his surroundings. I suppose there wasn’t much Tar Pit could do since he was freezing cold, but it would’ve been nice to use that creativity. Aside from that, the backgrounds and the issue as a whole were definitely pleasing to the eye, and the Christmas lights scattered throughout the city in the background made it all the more beautiful.

If you want an exciting Flash story, this might not be the issue for you. If you’ve read or seen any Christmas story ever, then you’ll know exactly what’s going to happen during this installment. However, the engaging characters can help you to look past all of this. THE FLASH #13 is an issue I would recommend to anyone who is a fan of the Flash and Christmas stories. It’s a fairly decent mix of the two.