After a promising set-up in THE FLASH #10, writer Joshua Willamson’s latest arc has petered into oblivion. The entire “Speed of Darkness” arc has completely lacked the wit, depth and emotion of Williamson’s previous arc on THE FLASH. Where his “Lightning Strikes Twice” arc took its time and laid out each story beat with precision, the execution of the “Speed of Darkness” storyline has felt totally rushed and truncated. It’s really unbelievable how different the writing now feels. It’s a shame because this story had a lot of great elements going for it: the return of The Shade, an exploration of the partnership between Barry Allen and young Wally West, and an evil Iris West! Sadly, the full potential of these elements were never explored. Therefore, the finale to this arc, THE FLASH #12, comes to a rushed, two-dimensional and disappointing conclusion.

Flash and Kid-Flash are trapped in the Shadowlands, formerly ruled by Flash’s one-time adversary, The Shade. The Shade’s long lost love, Hope (Ugh) has been turned evil by the Shade’s out of control shadow powers. The darkness has consumed Wally’s aunt Iris too, and Flash and Kid-Flash have to rescue them before it’s too late. Along the way, Wally questions why Barry won’t tell him his secret identity and doubts his own abilities in the role. 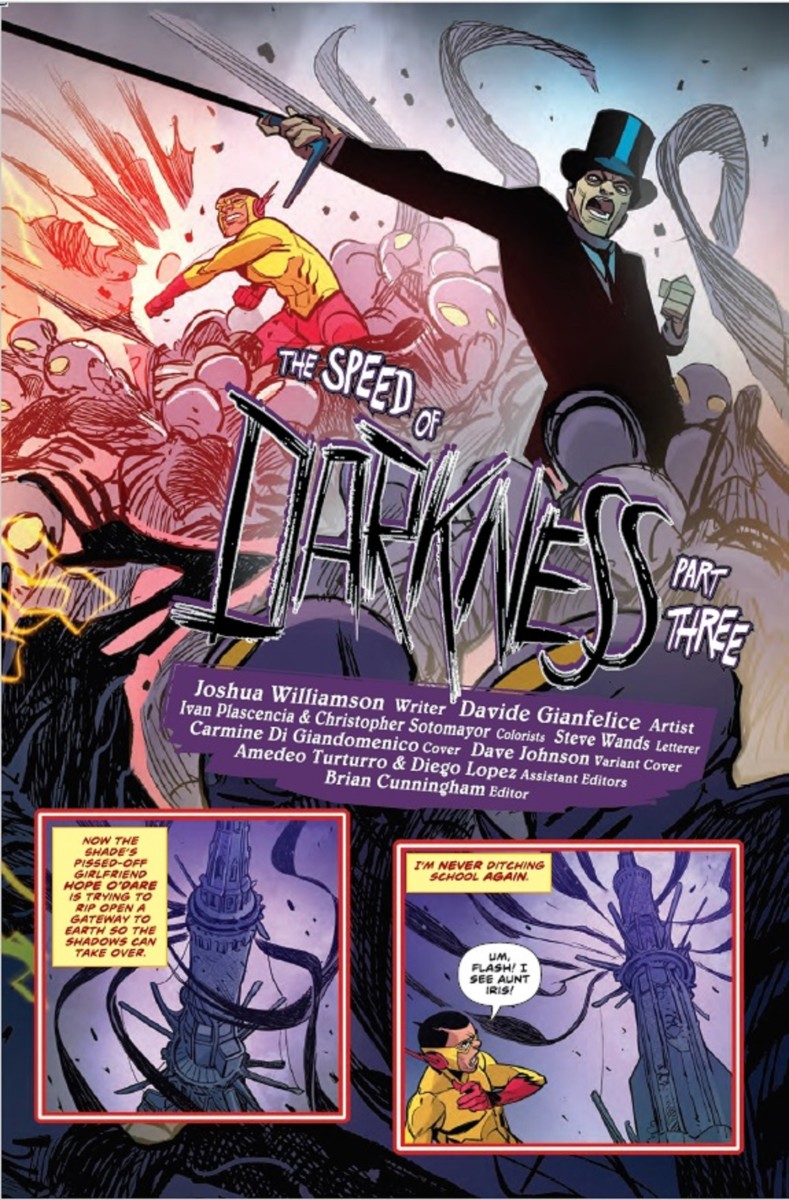 The dynamic between Barry and Wally is sadly full of cliches, though it has its charming moments. There’s a fun recurring gag where Wally keeps slyly calling Barry different names, like “Sean,” and “Chad,” trying to get him to confess his identity. Eventually, Barry reveals his reason for keeping his identity a secret from Wally, and it’s a good scene. It’s the only time the issue takes a pause to explore the characters’ actual emotions and enhance their relationship. Sadly, it’s back to clichéd antics after that, topped off by Barry and Wally using their new-found connection to escape the darkness with a light-channeling fist bump. Yes, you read that correctly. The entire finale is resolved with a fist bump. Is this the DC REBIRTH Flash, or the 1990’s TV Flash? I can no longer tell the difference.

Barry and Wally’s relationship also creates a parallel between The Shade’s regrets over losing Hope and Barry’s fears of losing Wally. It’s a nice idea, but unfortunately, the metaphor is clumsy, literally coming down to the concept of “fighting through the darkness” and “reclaiming the light.” Since we’re dealing with an actual battle between light and shadows, the metaphor becomes quite literal, and it’s groan worthy. It’s a shame too because the idea of the parallels between Barry and the Shade, and both their loved ones turning evil, could have been fascinating if properly executed. That could have been a whole arc in and of itself, with an evil Iris haunting Barry and Wally. Instead, evil Iris does absolutely nothing. She proclaims early on “I don’t need Barry or Wally anymore,” then, a couple pages later, “This isn’t me… we can fight it!” with absolutely nothing of consequence in between. She turns from evil to good in the span of 10 pages. It’s a huge waste. 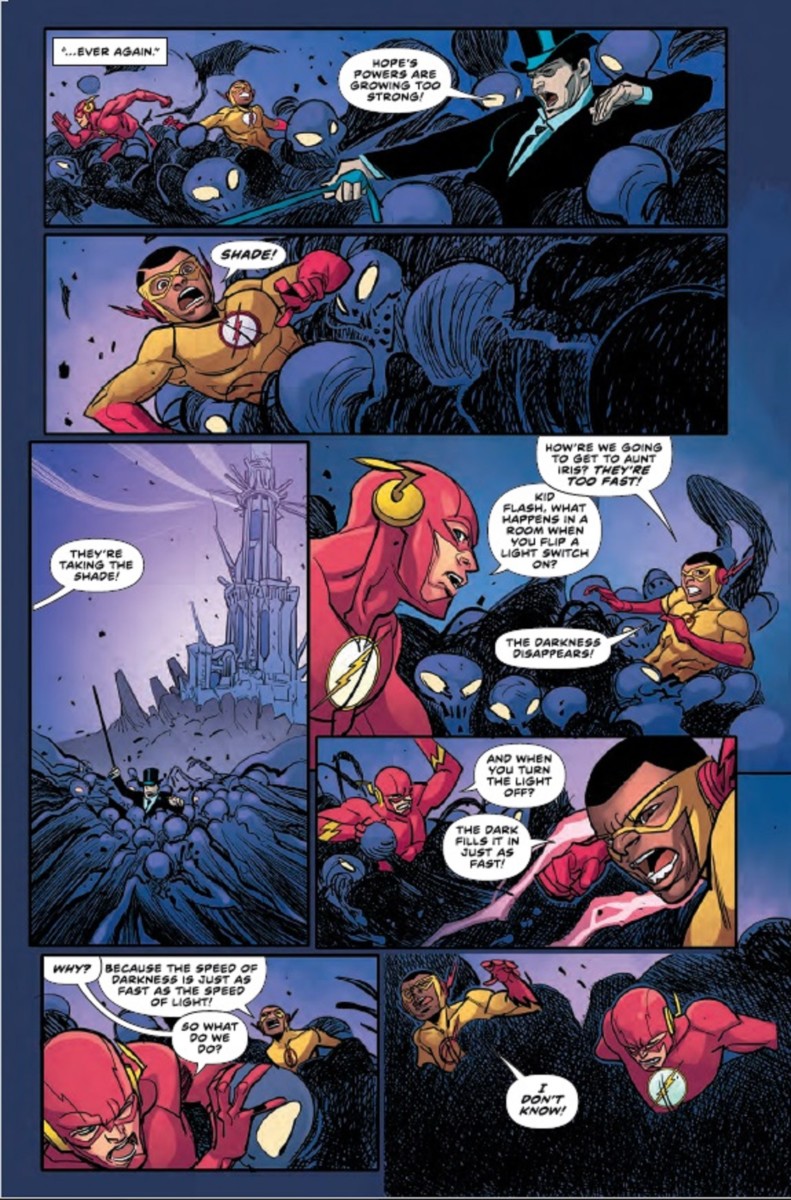 The art by Davide Gianfelice is somewhat palatable at least. He tries to mimic the work of Carmine Di Giandomenico from the “Lightning Strikes Twice” arc, mostly successfully, but without the same kinetic energy. That kineticism helped to define THE FLASH’s look early on. What we see here is the same basic style, but subtracting the kinetic element results in characters that look flatter and more cartoonish. I do like Gianfelice’s Shadowland design though. The dark, moody backgrounds and blue-black shadow demons create an atmosphere reminiscent of Tim Burton. Evil Iris and Hope lurk in a giant, spired castle that practically screams “Nightmare Before Christmas.” The shadow demons, with their giant bug eyes and gaping ghost mouths, look like they flew in from Halloween town. Honestly, this style would have been more appropriate in BATMAN, but since this arc takes place in a realm called “Shadowlands,” the style mostly works.

READ: The kinetic fun began in THE FLASH #1, and we reviewed it right here!

Now that “The Speed of Darkness” has ground to a lurching halt, we have to hope that Williamson has recharged his writing powers. Next up is a one-off issue titled “Date Night,” which will depict Barry and Iris’ first date. It’s a fun idea, and hopefully, will restore some of the series’ earlier character charm. THE FLASH started with a lot of promise, and up until this arc has been one of the best titles in the REBIRTH lineup. With better care and craftsmanship, hopefully, THE FLASH can attain that greatness again.