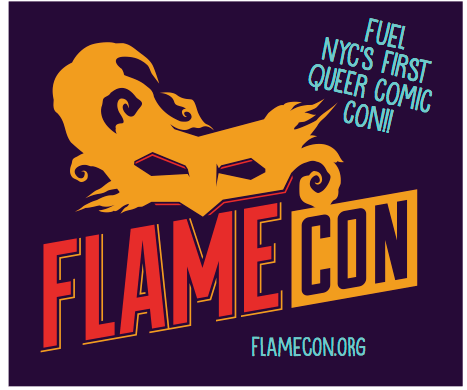 2015 proved to be a year where both progressive ideologies and activism were at the forefront in American culture. On the other hand, it will also be the year some will remember as the year of the overbearing “PC Police.” Somewhere in the middle, extraordinary events took place that will prove to be seminal in our world history. One of the many pros of the last year was the first year of Flame Con —an NYC comic book convention solely for queer culture— stands out. In light of some recent representation of queer culture in well-known comic book fandoms, having a first ever queer comic book convention is a major win.

For starters, Iceman–one of the original five X-Men created in 1963 had his sexuality confirmed as gay this past year. While we’ve always seen faint whispers and implications of the LGBTQI community in all kinds of media —including one as coveted and protected as comic books— it is a comfort to know that with marriage equality, more communities will be encouraged to thrive through events like Flame Con. Most people can agree that comic book fandom, like many traditions, isn’t always the most understanding or receptive group to change (just think of any understandable uproar in response to a ret-con or different characterization of a beloved character). However, keeping this in mind, imagine how much it means to queer fans to not only recognize but also identify themselves within the characters they’ve grown up wanting to be. From celebrity characters, like Iceman, Catwoman and Constantine, to the more obscure, like Mystique, Renee Montoya, and Batwoman, readers can feel an even closer kinship to their comic book idols.

Despite people’s best intentions, the LGBTQI culture —much like comic book culture and fandom— is not one that everyone fully understands. From something as historic as the 1969 Stonewall riots, to something more personal like feeling different and alone growing up, the LGTBQI and comic book communities parallel in promoting acceptance indifference. That being said, events like NYCC, the Gay Pride Parade, and now Flame Con, are beautiful in design because of the camaraderie it spawns among people. In a world where it’s easy to have our vision clouded by thoughtless violence and misguided hatred, it is important to ground one’s self in a community united common passion.

As people, I truly believe that we all need each other, one way or another, to survive. We need communication, to share ourselves with each other, and at the very least, try to understand one another. NYC Flame Con will join the many other conventions in which people can feel safe. Queer culture,  alliance and awareness aside, NYC Flame Con is going to allow for more people who feel alienated to reach out. For that, we’ll have to thank them by going to their second Flame Con this August 2016, where big name artists like Amy Reeder of ROCKET GIRL (along with special variant covers for BATWOMAN and SUPERGIRL) will be one of many special guests. And if you don’t attend, just take this as a friendly reminder that there can always be a group or place you can fit in and be yourself, however impossible it might feel. And that’s important enough.

For more thoughts on community, check out the CEO’s open letter on why he created ComicsVerse!