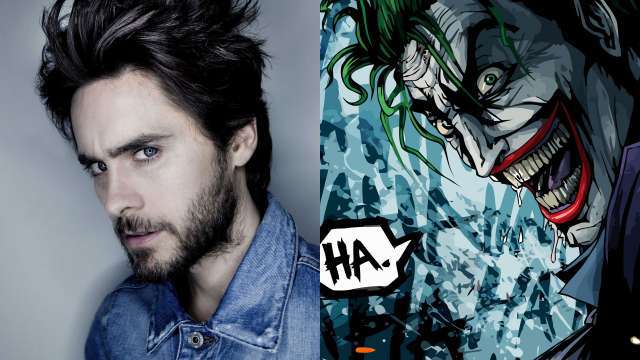 So, by now, most people have heard the news- The Suicide Squad, coming to theaters in 2016, has officially been cast. In addition to Will Smith as Deadshot and Thomas Hardy as Rick Flag, the attention of most people has been on Jared Leto.

Rumors had been milling for weeks about Jared Leto’s possible casting, but now it’s finally official: he’s playing The Joker, the first actor to take on the role since Heath Ledger, who passed away shortly after filming The Dark Knight. This is a character that Heath Ledger reinvented, and for which he won a posthumous Oscar. The question on everyone’s mind is: how will Leto do?

Personally, I think Leto’s going to do great. He’s had a varied film career, and is incredible in every performance. But don’t take my word for it. Let’s take a look at the movies themselves.

Leto plays one of the bad guys in this Jodie Foster and Kristen Stewart thriller.  If you’ve seen the movie, or any movie ever, then you know that the bad guys usually get stopped.  Such, of course, is the case here, but it’s Leto’s reaction to it that makes this role a great one to look at when hoping for a little hint of Joker.  He’s bad, he’s mean, and he can flip out with the best of them.

Best moment: Flipping out after narrowly missing Jodie and Kristen.

This is a small role in the movie, sure, but the transformation Leto makes with his facial scarring late in the movie shows how unrecognizable he can be. While Nicholson’s Joker had a wide smile and bleached skin, Ledger’s had facial cuts and wore make-up. Angel-Face shows us that Leto can pull off facial transformations pretty well- though, admittedly, a lot of that credit goes to the make-up team as well.

Facial features aside, the violence in Fight Club must be mentioned. The fight scenes demonstrate Leto’s ability to fight and to take a beating. These are both important when going up against Batman, an encounter which will inevitably be in a future Ben Affleck Batman movie.

Best moment: Getting his face destroyed by Edward Norton, and revealing the shocking results of that beating.

This is one of those Nic Cage movies where he plays a regular person, so it’s actually pretty good. Still, Jared Leto’s performance as Nic’s coke-addicted brother helps kick the movie up a notch. As mentioned previously, Leto shows a great talent all around, capturing the effects of cocaine as well as he captured the addiction in Requiem. His character is coked-out, he’s high-energy, he’s goofy, he’s fun, and he has a heart of gold. Make that personality evil instead, and it’s fun to picture the results.

Best moment: It has to be Vitaly’s christmas Angel. His antics are hysterical, and for a moment, his smile is almost reminiscent of the Joker’s.

Number Two: Harry Goldfarb in Requiem for a Dream (2000)

No one should be surprised that this one made the list. This is one of Leto’s better performances overall, and with good reason. This movie shows his full range of emotions, and even better, it shows him at his deepest and darkest. The addiction here is fully believable, and the Leto makes his character relatable, grounding him in a reality the rest of us can imagine ourselves in. This is what makes the movie so poignant. Here’s a character whose loves, hopes, and dreams we understand, and with whom we descend into anger, hate, addiction, and hopelessness.  We see such anguish and frustration in the scene where he finds out his mother’s on uppers.  Imagine a similar effect with the Joker, and it’s easy to see why Requiem for a Dream gets us excited.

Best moment: His descent into addiction is so well-done, it’s hard to pick just one scene.

We spoke about his transformation earlier in Fight Club, but this movie is a far better example of Leto going completely into character.  This movie really showed off his acting chops, showing a character that was quite unlike anything he’d done before.  However, while this movie did earn him an Oscar, it also seems to be the movie people cite as being one of the reasons he couldn’t be the Joker.  We disagree.  If anything, this showcases the immense talent Jared Leto has.

As an interesting coincidence, we’ve pointed out before that Joker has quite an obsession, one which has often been called an unrequited love, with Batman.  His sexuality is largely up-in-the-air as an effect.  His relationship with Harley is extremely negative, with him rarely ever actually appreciating her presence, and even then, not romantically.  Batman is the only person he really loves.  Not that this will necessarily play out in the movie, but that would be pretty interesting to see.

Jared Leto has had an incredibly varied career, and, whether you love the idea of him as Joker or not, we’ll see how he handles the role in 2016.  We’re confident that his performance will quiet any doubters.  2016 is too far away- we can’t wait to see what Leto does with this character.  One thing’s for certain- it’ll be done well.

For other articles, including weekly video reviews, click here!