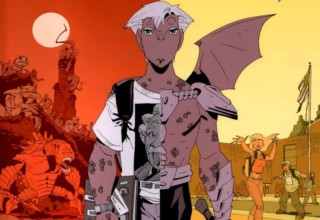 I want you to think about one of the biggest Marvel/DC heroes or heroines right now. Really, do it. Take a minute or two if you still haven’t thought of one. Got it? Okay good. Now raise your hand if you chose Spiderman, Wonder Woman, or Batman. Thanks to all of you currently raising your hands, because you are about to help me in the next few minutes.

You see, every single one of these characters has an origin that deals with being orphaned to some extent. In fact, it’s not breaking news that many well-known comic book characters are orphans. For many it’s the force that guides their actions, whether for good or evil. For some it’s a tragedy that stops them from reaching their true potential. Characters are given origins like this for a purpose. It’s not so that we can see them struggle, but mainly writers want us to sympathize with them. They want characters to be more relatable.

Now, the reason I bring this up is because sometimes characters are made to deal with traumas that are much less fatal than death. Though their origins do no revolve around the death of their parents, they may suffer in another way. For some, that trauma comes from divorce.

Divorce is one of the heaviest hitting traumas in America, if not the world. Contrary to popular belief, not every single relationship has a happy ending. So of course it only makes sense that at least some comic book characters have come from a broken home. For the sake of this conversation, I will only be using FIREBREATHER’s Duncan Rosenblatt.

Image Comics’ FIREBREATHER was possibly the first comic book I ever related to. This isn’t because as a kid I was obsessed with magic and dragons. Rather, it’s because I too was living in a home that could be considered broken. I was drawn to a character that was able to keep it together even when everything around him was falling apart. To me, Duncan was everything that I wanted to be. 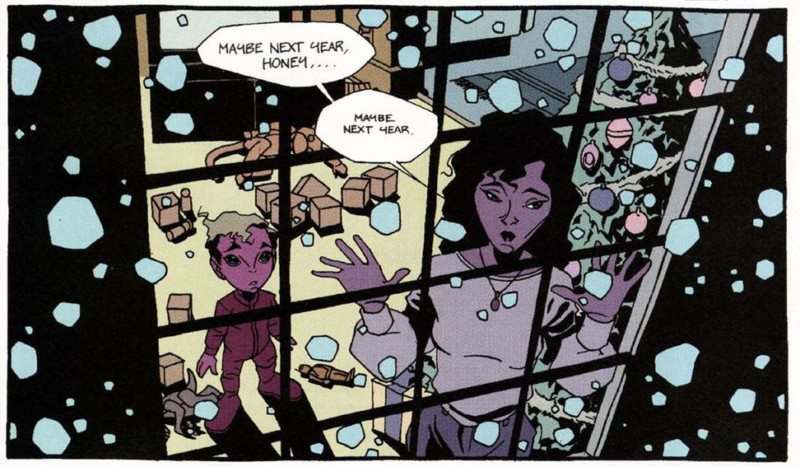 In this narrative, Duncan is a half-human, half-dragon teenager. He lives with his human mother and goes to a human school where he sees his human classmates. But then there’s the other side of him: The dragon side that must train to be like his father because he is an heir to destruction itself. I could never understand what it would be like to have an angry, chaotic dragon for a father, but it’s not appearances that matter here. It’s what they represent.

Many families have parents who bend their children to their will mainly because they are blinded by the emotions they feel for their former partner. They may argue or relinquish visitation rights just because they want to avoid confrontation, but, in these situations, the children are the ones who take most of the pain.

Volume 1 of FIREBREATHER is purposefully called “Growing Pains.” Yes, in one way the pain here can be literal in the sense that he is constantly fighting the threats that attack him. Let me provide an alternative though: Perhaps the pain is internal, in the sense that Duncan has to deal with his parents’ torn relationship every day. He must constantly struggle to see them interact. 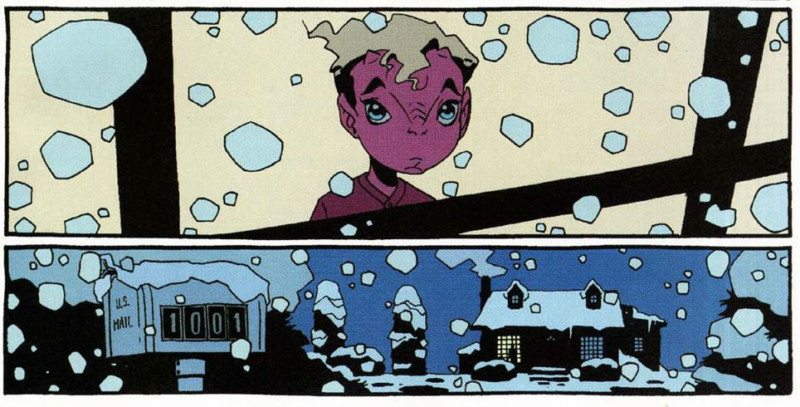 It’s hard to believe that Duncan’s mother would even fall for a monster like his father. I mean, she’s a small human compared to the gigantic red dragon that is his father. We as readers can see why the marriage failed, but, for Duncan, they are still his parents. I’m sure he never expected them to separate like they did. Like most divorce cases, it just happens.

Okay, so on to the grit. We already get the internal struggle that he has to prove dad that he can be strong and ruthless. We also understand the need to prove to his mother that he won’t be the monster everyone else sees. So then why discuss the obvious? Well, it’s because there’s a bigger argument at hand. Duncan’s character is not only living this nightmare so that we can sympathize. He is used to symbolize the Identity Crisis.

READ: Want to dig deeper into Image titles? Check out this analysis of the comic OUTCAST!

It’s something we even see the greatest of heroes go through. How do we find ourselves, when we don’t have the proper guidance?  Kal-El didn’t know what he was until his true father showed him his Kryptonian roots. Duncan has a father to tell him what dragons are like and a mother to tell him what humans are like, but he is the only one of his kind. A half breed. So no matter what they tell him, he struggles to find a balance. 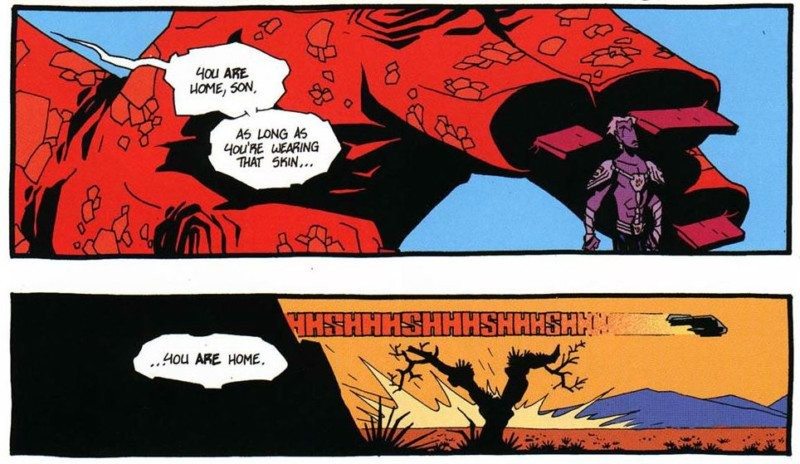 If his family wasn’t torn, Duncan might’ve had a chance for both halves of his background to remain balanced. His family is torn though, so no matter what his actions will always contradict the wishes of his parents.

On page 64 of FIREBREATHER Volume 1, Belloc (Duncan’s father) burns all of Duncan’s clothing to a crisp, an action he warrants due to his distrust for human tracking devices. Instead of offering to help Duncan with the homework he just burned, Belloc gives him intensely dangerous training exercises. He forces him to fight, stating that only death can be his judge. 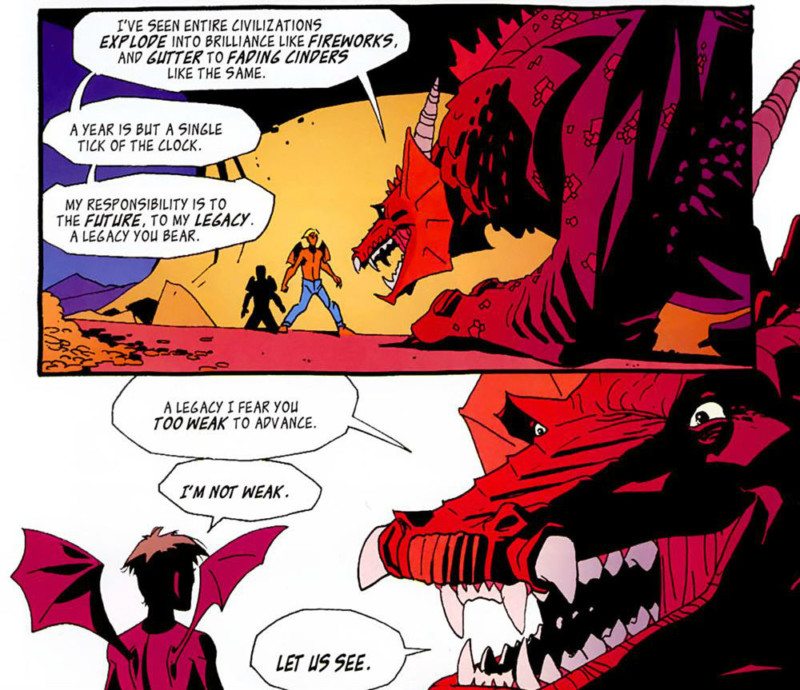 Can you imagine being told that by your father or anyone important to you? It’s something that I’m sure would be difficult to hear. It’s kind of the comic book version of being told you’re a failure. It gets worse, though. In FIREBREATHER Volume 2, Belloc challenges Duncan to see how strong he has gotten on his sixteenth birthday. He proceeds to beat Duncan physically in order to push him to fight back.

This, though, is surprisingly not the first time we see child abuse in this comic. Through peer counseling, Duncan meets a boy named Ken who also struggles with this serious issue. Ken explains to Duncan that his father has a habit of being intoxicated and beating him. Ken also has had suicidal thoughts, though he has not acted out on them. The scary thing is that Duncan wasn’t aware that normal humans could go through things like this. Shortly before that he believed that Ken was reclusive because he had poor hygiene. 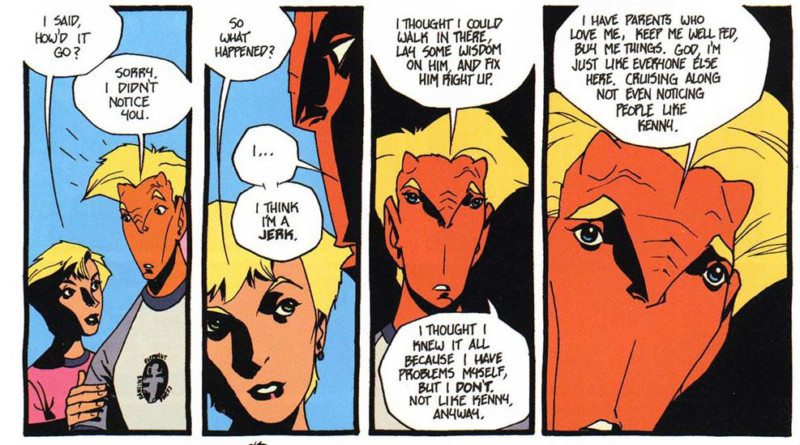 Duncan begins to sympathize more with this character and sees him as a friend. This is because Duncan honestly believed he was the only one who could ever go through something terrible. As the narrative continues, we see that Duncan is coming to terms with who he is more because of the people around him. His parents are still divorced and nothing can quite change that, but his perspective can. He starts to share more of his dragon self with his mother through the story, as he does with his human side for his father.

In turn, Duncan starts to accept his situation. It doesn’t change the fact that his family is broken, but it does give him people to help him cope and discuss what he’s going through.

LISTEN: Interested in more Image Comics? Check out this podcast on the popular Image title NAILBITER!

FIREBREATHER may be a quick read and a short-lived narrative, but the themes within it are strong. I’ve never quite been able to relate to a character more than I have with Duncan. He perfectly embodies the raw emotion that children go through when dealing with their parents’ divorce. What makes him so real is the fact that he does get angry and he generally doesn’t cope well with this situation. Because honestly, who does cope well with something like this when they are so young? Divorce is a powerful topic. Not many people are willing to discuss it, let alone build a story around it.

I commend Phil Hester as well as artist Andy Kuhn and colorist Bill Crabtree for their ability to build a fictional universe that delves into this topic so well. They’ve created a narrative that exemplifies a broken home but doesn’t romanticize it with a happy ending. Instead, we get a genuine character who shows us what it’s truly like when children go through family trauma.

What are other characters or comics that embody a serious trauma very well? What writers have a tendency to talk about serious issues? Leave any thoughts or comments below!