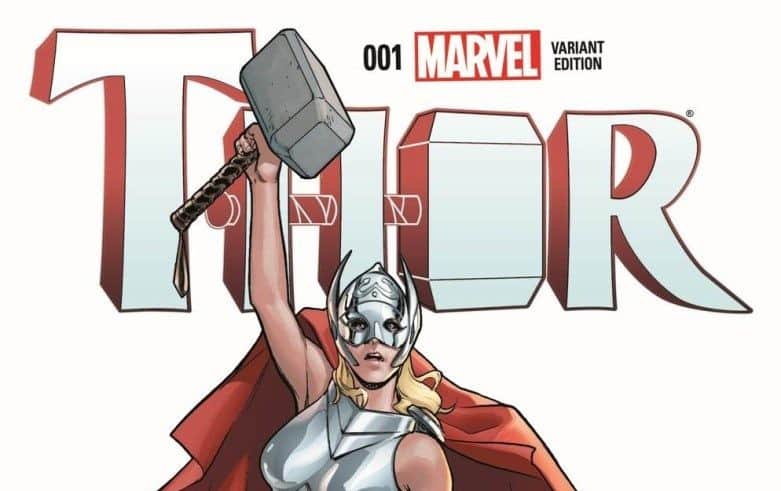 A little less than a year ago there was a shocking announcement released on The View of all places about the future of Thor, God of Thunder. His gender was about to change, and the internet exploded with rants and angry statements (a very coherent one that criticizes this gender change is printed and responded to at the back of this first issue in an extremely patient manner by Jason Aaron). Female Thor was the revelation. The comic has not only come, but it’s first story arc has officially run its course, and it will surely become more integral to Secret Wars very soon, so we at ComicsVerse believe it is time to look back, knowing the things that we know now.

The story does not begin on Asgard or Asgardia, but on Earth, aka Midgard. A submarine is checking on a disturbance in typical human fashion- disbelieving dudes are going down to the bottom of a crevice unconvinced that anything could ever possibly go wrong (Spoiler alert: They’re wrong). They quickly realize that the crevice is actually a portal that the Frost Giants are using to come to Earth.

The scene then switches to The Moon in the Shadow of Asgardia, where Thor has been going insane as he obsessively tries to lift Mjolnir with no success. The battle he was in previously with the Avengers has changed him, or more specifically the secret Nick Fury whispered to him has, and Thor is no longer worthy of his hammer. His father, Odin, blames these events on the coddling of the All Mother and says that he will now resume rule over his kingdom. Freyja argues against this change, and mentions to the All Father he was the one who placed the enchantment upon the hammer in the first place. Remembering this information, he attempts and fails to lift the hammer himself, which his lovely wife mocks in spectacular fashion. 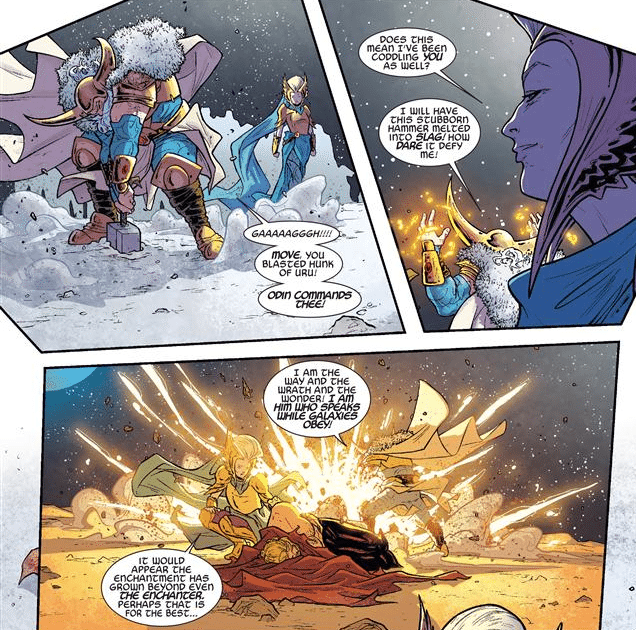 In the midst of this galactic pissing contest to see who is truly worth to wield Mjolnir, the Asgardians receive news that the Frost Giants have invaded Midgard. The All Mother calls for an attack, but the All Father disagrees. Thor says that he is going to go to the weapons vault and then return home, which Odin misunderstands to mean Asgardia. The All Mother, however, knows that he’s going to protect his new home, Earth. Back at the submarine base, Malekeith has arrived and is looking for a mysterious item that the Frost Giants have lost. He is partaking in the typical acts of evil, maiming and death, when Thor arrives without his hammer. Thor fights, but he is defeated, losing an arm in the process.

Back on the moon, when no one is around to see it, a mysterious person grabs Mjolnir while saying that there must always be a Thor. The last panels reveals our new protagonist, Thor: Goddess of Thunder! 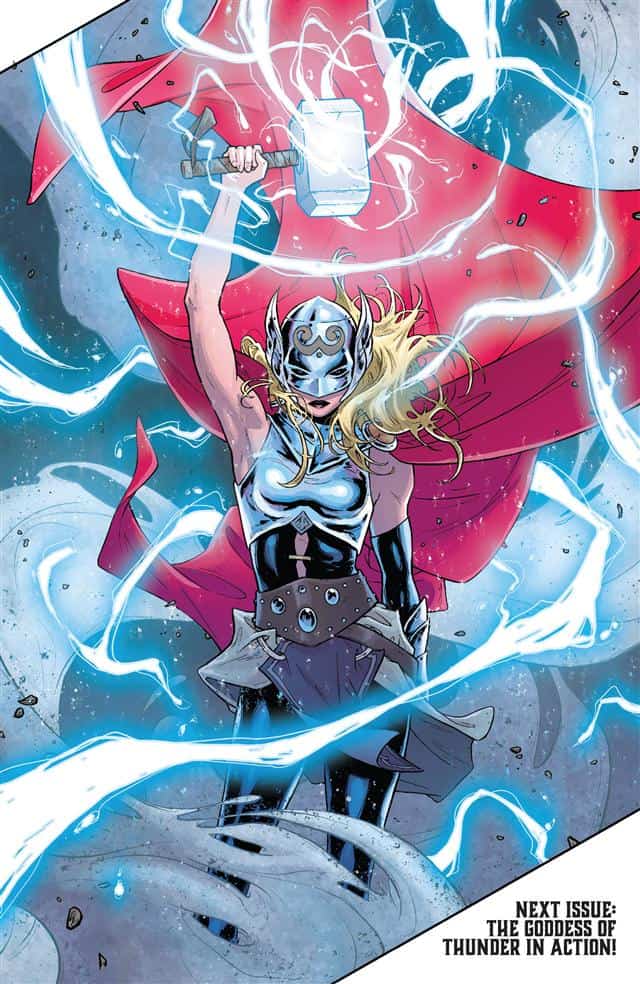 Outside of the controversy about new Thor’s female gender, it is now time to look at this issue for its theme and its statement. First of all, the set up for this issue does not really do justice to how awesome the rest of this story is, and I am not talking about the Frost Giants. They are a staple of the series, and it makes total sense to use them here, because we are introducing a new era. The human characters in the underwater base on the other hand… How should I put this kindly? They’re dumb, and I don’t mean that they’re a silly batch of characters to use- I mean the characters themselves are dumb. They respond by sending out the attack sharks. I love high-profile silliness with sharks, but for some reason this entire build-up just felt a little flat to me.

However, everything on the moon is amazing because it goes so well with part of the larger theme of this entire comic: female power versus male power. The conflict that is explored here between the All Father and the All Mother specifically is extremely fascinating to watch because Freyja is amazing. While Odin is impulsive- attempting to pick up the hammer and then literally exploding when this does not work- and selfish- refusing to help fight off the Frost Giants- Freyja is understanding. She understands that Thor is returning to Earth and not Asgardia. She understands that it is a part of Asgard’s duty to protect realms from things that they do not understand- the Frost Giants. She has the best interest of Asgardia at heart as well as the universe, while Odin is clearly obsessed with his own ego, ironic in that he attempted to beat that same ego out of his son by enchanting the hammer to begin with. Overall, both of these plots, Odin’s and Thor’s, are used to show ways that these men have fallen away from what they are supposed to stand for. But not to worry because Freyja and the new Thor understand what has to be done for the better of society and will do it. 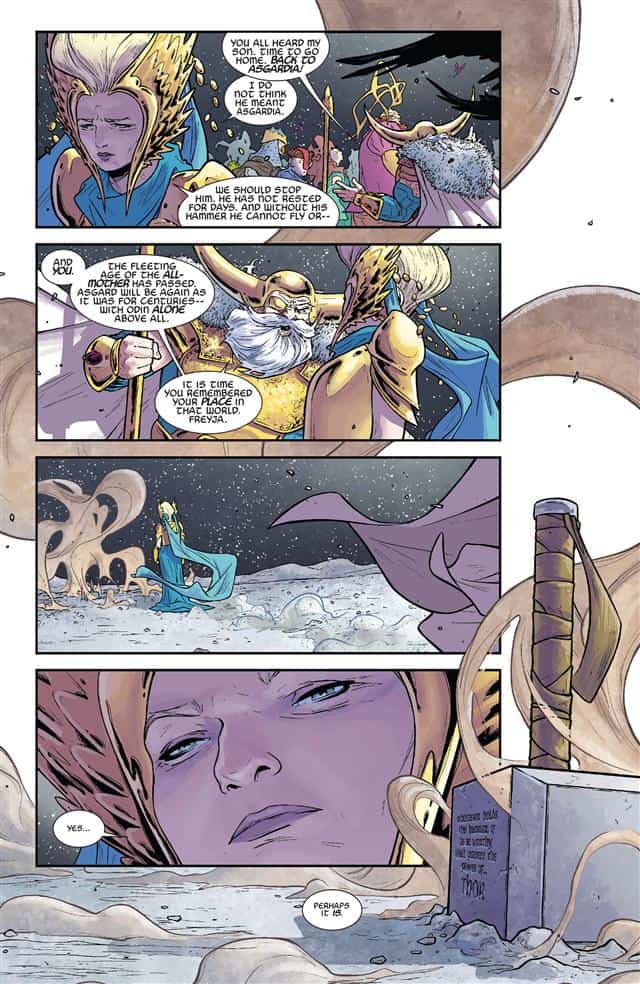 This tension will continue to boil over the course of the eight issues we are going to revisit, but I have to admit that this plot point is the strongest part of the series and it all begins here. It could be argued that this central conflict over gender is sexist because it is only happening due to Thor’s change from male to female; However, in light of the response the reveal received it was the best and only way to handle the entire situation because clearly some people do not believe that women can be worthy. In the comment that Jason Aaron published along with this issue, the man who is unhappy with the change named Oscar Nunez says the change is an “obvious gimmick regardless of spin [like] the dislikable limited Original Sin series involving Thor and Loki, where Thor was just thrashed around by Angela as if he were Pre-Cap Steve Rodgers.” Aaron responds by saying that Thor has always been a story about worthiness and transformation, referencing Thor’s first appearance as Dr. Donald Blake as a man with a disability that finds a cane which transforms into the hammer. I have to agree with Aaron, even though the example he has pulled is a tad big problematic mostly because Dr. Blake’s disability was removed once he gained control of the hammer, and Aaron’s version of transformation does not remove elements of character- our lovely lady remains a lady once wielding the hammer. Ironically enough, I have to argue that Mr. Nunez has, much like Thor and Odin, lost touch with what always made Thor so great. As Aaron argues, the greatness of the comic has always been related to proving one’s worthiness and then maintaining it.

The reason superhero stories resonate and continue to last over time is because the characters themselves speak to something larger. We love to watch them do amazing things, but that is because we are able to relate to them. Captain America was great because of his personality. He wouldn’t have been chosen to be a Super Soldier if it wasn’t for what was inside him. Similarly, Thor was great because he was worthy of being Thor! So even though I am inclined occasionally to want to pull down a comic like this for implying that women have to prove their worth, sadly many members of the audience need this arc to show them how worthy women are of being a leading superheroine and leading in society.  With this run, Aaron seeks to prove this to all of the men who don’t believe that this is a true Thor story, and he started off with a huge punch by really foregrounding this discussion around female empowerment. Reading through this again it is even clearer what a great run this is, and if you haven’t read it before I encourage you to pick it up with me again as we go on this Thor journey.