WARNING: Spoilers Ahead for THE FATE OF THE FURIOUS!

Radio City Music Hall held the World Premiere of THE FATE OF THE FURIOUS on April 8th. ComicsVerse got to sit in and watch. Director of the film F. Gary Gray and headlining star Vin Diesel shared a few words with the audience before the movie played.

The director of the 2015 summer hit STRAIGHT OUTTA COMPTON expressed his gratitude for being able to play a part in this immensely popular franchise.  Vin Diesel talked about how proud he is of his New York roots, and how much he misses his friend Paul Walker who passed away in 2013.

However, Vin Diesel assures audiences that Paul Walker would love the film they made and the way they’re continuing the franchise in his honor. After watching the movie, I concur with Vin Diesel, THE FATE OF THE FURIOUS does a phenomenal job of respecting their deceased friend.

READ: See how the Fast and Furious franchise subverts the typical male stereotypes.

The story begins with Dominic Toretto (Vin Diesel) and his newlywed bride Letty on their honeymoon. A mysterious woman (Charlize Theron) interrupts their wedding bliss when she coaxes Dom into helping her thus betraying his family. Now the group has to face off against one of their own, but they have some extra help this time.

The villain of the previous movie FURIOUS 7 Deckard Shaw (Jason Statham) has joined to help them stop Dom. Several of your favorite Fast and Furious characters return in this action-packed, high-speed racing blockbuster flick!

The Fate of THE FATE OF THE FURIOUS

Even as a Fast and Furious fan, I must admit the last film was a bit underwhelming. Aside from the beautiful send-off they gave Paul Walker’s character (Bryan O’Conner), the film was cheesy and over the top. Coming off a not so great film, and this being the first Fast and Furious film without Paul Walker, my expectations were low.

To my surprise, THE FATE OF THE FURIOUS delivered an engaging story. The films in this franchise are easy to follow, and when you go into a Fast and Furious movie, you know what kind of movie you are going to get. That is ideal for new viewers of the films since it is not difficult to understand, although, first-time viewers will miss out on the journey of these characters. Specifically Dom’s story, which involves Vin Diesel delivering an emotional scene in this film that had me tearing up.

Vin Diesel typically plays the same stoic badass roles with little variation. However, this time, he evoked emotion from me. Fans that have been with Dom from the beginning and seen what he’s lost will have their hearts ache when that pain crushes him in THE FATE OF THE FURIOUS.

Is Charlize Theron the Savior of THE FATE OF THE FURIOUS?

It is thanks to the sadistic mental anguish Charlize Theron inflicts against Dom, the villain, that Vin Diesel’s level of acting reaches new heights. Unlike Statham’s physically imposing villain in the last film, Theron’s character plays mind games. Theron knew what to do and say to Dom to get him to do what she wanted. This was an excellent change of pace from the villains in the past. I certainly hope the franchise adds more villains like Charlize Theron’s character in the future. 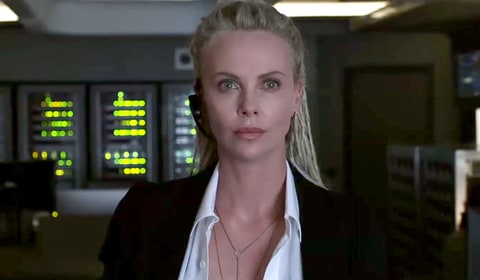 Another standout character from THE FATE OF THE FURIOUS would be Dwayne Johnson’s, Hobbs. The former WWE wrestler has charisma both on and off the screen. Due to this, he pulls off ridiculous one-liners. His back and forth with Shaw is guaranteed to get a laugh out of you. Their animosity for one another stems from their previous bout in FURIOUS 7.

READ: Speaking of films that turn on the waterworks, check out our LOGAN review!

In this movie, they’re forced to work together, so they have to result to taunting one another – which in all honesty is just as entertaining as them fighting. My only complainant is that we hardly get to see Shaw interact with the other members of the team. He mostly sticks with Hobbs throughout the film, but that’s all right because as I said before they work great together.

THE FATE OF THE FURIOUS added a new character to the franchise, Scott Eastwood’s Eric Reisner. The only other film I’ve seen with Scott Eastwood is SUICIDE SQUAD. Based on the amount of screen time and content given to Eastwood, I can tell Universal Pictures is treating him better than Warner Brothers did. In SUICIDE SQUAD Scott Eastwood was in that film so little, I didn’t even bother to learn his character’s name.

In the movie, however, Reisner is a rookie agent working under Mr. Nobody (Kurt Russell) who has assigned Reisner to work with Dom’s former group to bring him down. Being the new guy, the team hazes him with their words, and it’s hilarious. THE FATE OF THE FURIOUS managed to fit in an arc for his character. He learned how the group operates off the books. I look forward to seeing how his character evolves.

Let Action Be Thy Name in THE FATE OF THE FURIOUS

All the other characters do a tremendous job in their roles; I especially liked the way Mr. Nobody would just pop up throughout the film to deliver some funny one-liners and then leave. Kurt Russell is proof that for a good actor, there are no small roles. As expected, a lot of the laughs when the group is together come from Tyrese Gibson and Ludacris.

READ: Are You A Fan of SAMURAI JACK? Check out this piece!

Their characters get to shine when they take on a submarine on ice while driving a mini-tank and a neon orange Lamborghini (take a wild guess who drives which vehicle). Just when you think the Fast and Furious franchise can’t escalate the action sequences any higher, they go out and do just that in THE FATE OF THE FURIOUS. The two huge action sequences are some of the biggest and coolest in any action movie ever!

Whether you’re a long-time fan of the franchise or newly interested in the franchise, THE FATE OF THE FURIOUS guarantees entertainment. It hits every beat of the past films that you’ve loved while managing to remain respectful to the late Paul Walker character’s legacy. There are two more films left in this franchise. If they are anywhere near as fun and heartfelt as this film – then let the drive continue onward! Viva la Familia!

THE FATE OF THE FURIOUS opens in theaters everywhere April 14th.