Writer Dan Slott’s latest FANTASTIC FOUR arc has seen Dr. Doom return to his roots as a villain. I’ve found the characters return to evil less-than fulfilling, however, and FANTASTIC FOUR #9 doesn’t do much to alleviate my doubt towards this story.

Slott has a lot of fun here, filling the pages with as much action and excitement as he can. However, in the process, we don’t see anything new from any of the characters. We get more of the usual, which works, but doesn’t stop the story from feeling somewhat tiresome.

FANTASTIC FOUR #9 features a mixture of artists. Between Aaron Kuder, Stefano Caselli, and Paco Medina, there’s a lot to enjoy here, although nothing really helps to elevate the story. It’s good artwork for a less-than optimal story.

The Humiliation of Doom in FANTASTIC FOUR #9

Picking up right where FANTASTIC FOUR #8 left off, the team find themselves trapped in another one of Doom’s elaborate deathtraps. However, Sue pulls a surprising move on Doom, turning his armor invisible and revealing his deformed body to the entire galaxy. At this point, the team decides to make their escape, using their powers and a sequence of system failures to breakout of Doom’s traps. 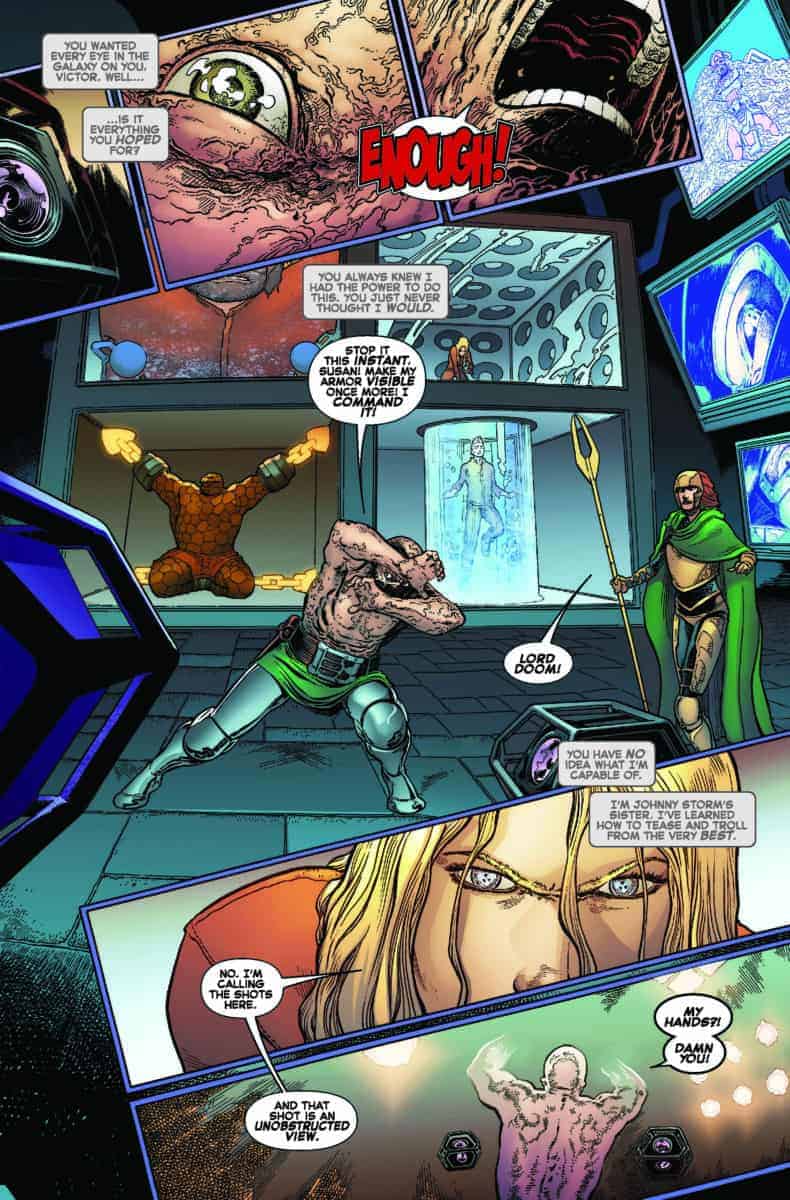 The team flies off to get Galactus out of Mount Doom. Victorious tracks them down, however, and attempts to stop them, but they quickly subdue her. Using Doom’s own machines, Reed is able to release Galactus from his earthly prison. Since Reed had made some sort of deal with Galactus, the titan decides to leave the Earth behind. Before Doom can attack the team again, they teleport out, thanks to Valeria’s quick thinking back home.

While all of that was going on, Franklin and Wyatt were getting into some trouble with that girl, Wendy, who Franklin met last issue. Eventually, though, everything subsides, and FANTASTIC FOUR #9 ends with a pleasant family reunion.

Fun Storytelling That Does Little to Impress

Though FANTASTIC FOUR #9 seems fairly exciting, there isn’t much here that will outwardly impress anyone. This feels like a fairly standard issue. It wraps up the current arc, but doesn’t do much to move the story forward.

I’m upset Slott didn’t give us more to enjoy. I didn’t expect much; the arc felt lackluster from the get-go. However, given Slott’s pension for throwing curveballs left and right, I don’t see why he decided to ease off the throttle so suddenly. The straightforward action in FANTASTIC FOUR #9 is fun to watch, but there’s hardly any nuance to any of it. So, in the end, you’re left with next to nothing to show for this entire arc. 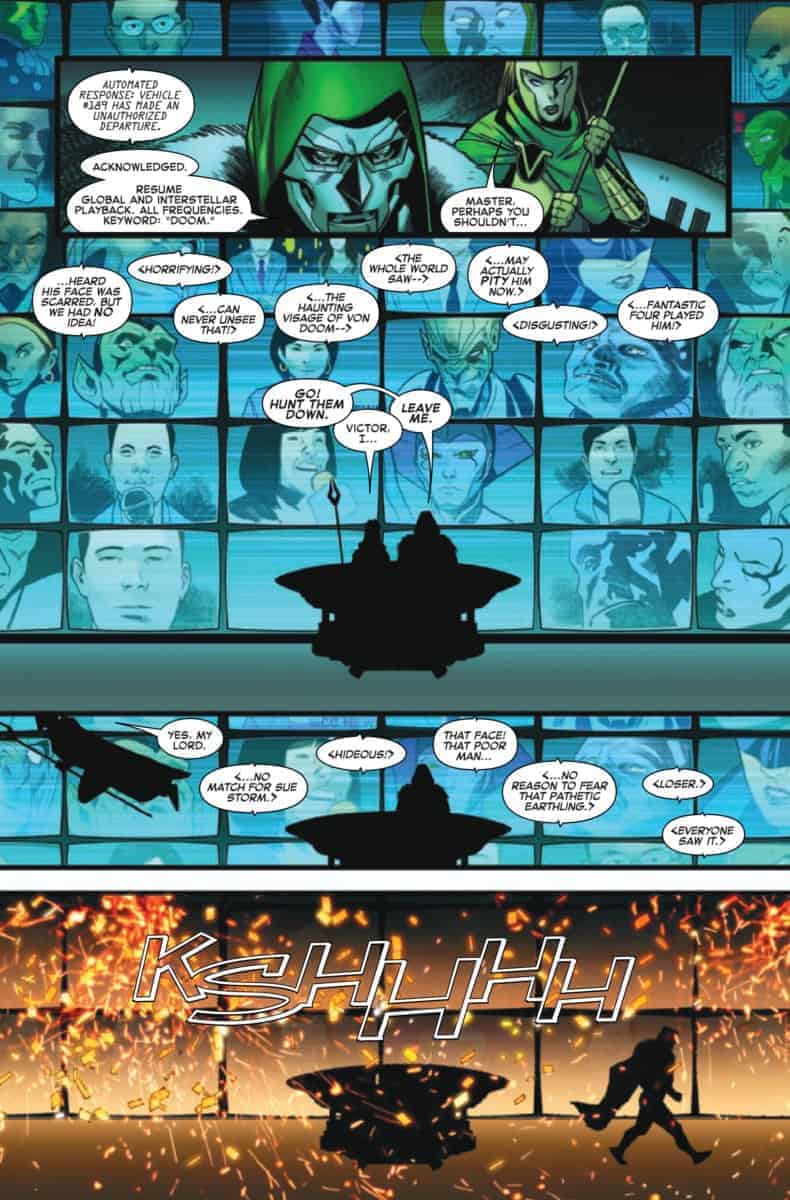 Also, I’m still not a fan of Doom suddenly being a villain again. The transition receives no explanation or justification throughout this entire arc. If anything, he should’ve felt more like an anti-hero at this point. But, no, he just decided he should aggravate the Fantastic Four again. Because reasons. I don’t normally expect this kind of uninspired writing from Slott, but I suppose all writers have their weaker moments.

Ultimately, the story of FANTASTIC FOUR #9, and this Doom arc as a whole, has been a letdown. Nothing consequential happened. This feels like Slott’s excuse to write a villainous Doom story, nothing more.

The Art is Good, But It’s Nothing Special in FANTASTIC FOUR #9

Much like the story, the art in FANTASTIC FOUR #9 feels equally uninspired. It’s not bad, by any stretch, but it won’t leave you fawning over the pages for more. Which I’m surprised to say, given Stefano Caselli drew some of these pages, and I absolutely adore his artwork.

Between Kuder, Caselli, and Medina, Kuder gets the most work here. And for once, I completely enjoyed his pages. There weren’t any moments I found particularly lousy or unclean. He gets to have a lot of fun here, which comes across in his art. Caselli’s pages are a bit more understated, but this is far from his best work. And what few pages Medina got to draw won’t exactly strike you as anything special. They’re nice to look at, but that’s about it. 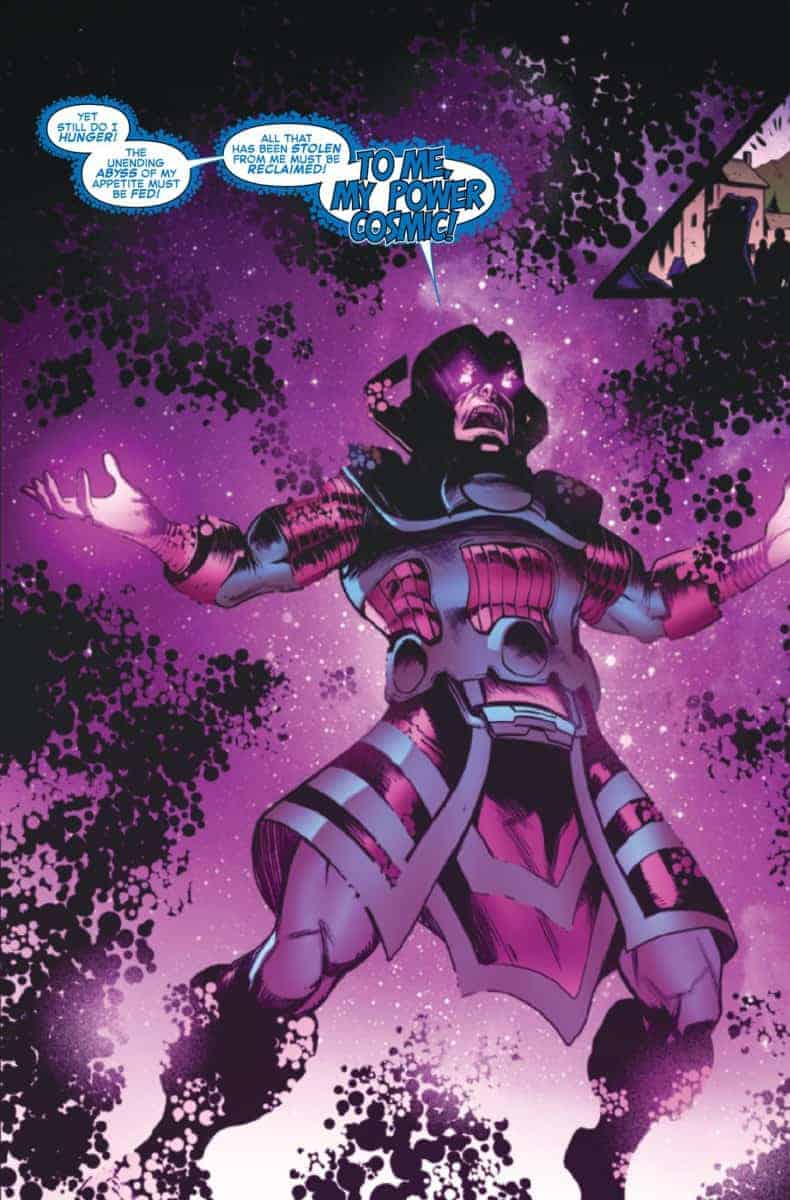 Overall, nothing stood out for me in this issue, other than the few pages featuring Galactus. Besides those few pages, though, FANTASTIC FOUR #9’s pages do little to impress. I’m not disappointed, per se, but I definitely expected more from the artists.

I’m glad this whole Dr. Doom arc is finished. It was extremely forced, and did little to progress any of the characters. But, with the Fantastic Four headed home now, maybe we’ll get to see some more substantial storytelling moving forward.

Slott’s story is fairly weak here. Again, it’s a forced, villainous Dr. Doom story, where none should have been in the first place. This is easily one of Slott’s weakest comics in recent history. However, I’m willing to look past this and towards the future. Hopefully, things will get better. The same goes for the artwork; nothing special here in FANTASTIC FOUR #9, but we’ll hopefully see something better soon.

Though FANTASTIC FOUR #9 is the series’ weakest offering, it doesn’t mean the series is down for the count. I’d keep an eye on future issues. But this is definitely an arc we could have lived without.