Fan-films are one in a million. There are hundreds, if not thousands. From the AVENGERS to HARRY POTTER, fans will stop at nothing to see their personal vision come to life. Some do it for fun, out of love of the character or property. Others make them with the intention of gaining some traction for a character that needs it. Enter KAMALA; a fan-film made about the Marvel comics heroine Ms. Marvel in the hopes of showing the world (and Hollywood) that audiences are ready for a Pakistani-American superhero.

Making a superhero fan-film is no easy feat. Hollywood studios invest millions of dollars in acting talent and special effects, and sometimes that doesn’t pan out (see: SUICIDE SQUAD). Fans working on a shoestring budget to create something even remotely watchable is nigh-impossible. Besides a couple rushed fight scenes, KAMALA avoids this fate because it knows where the heart of the story lies: not in Ms. Marvel, but her alter-ego, Kamala Khan.

Origin stories and struggles with one’s alter-ego have been done to death in live-action Hollywood films. Everyone knows Bruce Wayne is a billionaire orphan; Matt Murdock is a lawyer when he isn’t Daredevil. At this point, we’ve seen it all. A lot of Marvel’s biggest heroes don’t even bother with an alter-ego, bucking the trend more or less since IRON MAN. The superhero with the most significant alter-ego issues is Peter Parker, but his life outside of the Spider-Man suit features in all seven of his films. 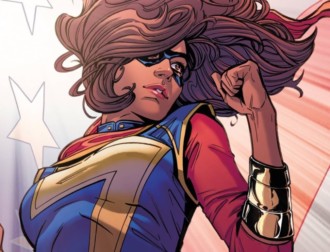 KAMALA follows a lot of the same familiar beats you see Spidey go through, but whereas Peter is bullied for being a nerd, Kamala deals with an entirely different type of bully. Hearing a bully say to Kamala’s face “careful, she might bomb the school” was equal parts infuriating and enlightening. It is maddening to see somebody so quickly stereotype a young girl, but the scene is also an accurate depiction of how some people view Muslims in America.

It’s these moments the creators of the MS. MARVEL comics want to get across, and KAMALA approaches them in a smart manner. MS. MARVEL comics creator, G. Willow Wilson, has seen the film and commented via Twitter that she was in “tears over it!’” Director/writer Landis Aponte clearly did something right. The writing is the sure stand-out. The scenes in which Kamala sits at home during dinner, or walks to school with her friend in the city are where this fan-film shines brightest. There are also great performances from Anita Kalathara as Kamala and Anjul Nigam as her father, Abu. Their scene following the bully conflict is the closest the short comes to theatrical films. It feels like a scene that might be inserted into an actual live-action Ms. Marvel film if that ever happens.

READ: Why Ms. Marvel is NOT your stereotypical millennial!

Still, KAMALA is far from perfect. It succumbs to a lot of what plagues other fan-films. While KAMALA has some pretty slick editing at parts, a lot of the fight scenes look shoddy. Special effects are never easy on a shoe-string budget. Transitioning between Kamala’s life and Ms. Marvel fighting evil is a good way to show both sides of her life, but the Ms. Marvel segments mostly fall flat due to bad special effects and some cringe-worthy acting from the trio of villains (Kaboom, Hijinx, and PC). On paper, it is a good idea, but on film, it could have looked better.

At the end of the day, these mistakes are OK for a fan-film. The point of KAMALA was never to show off her powers or how awesome her fight scenes could be — it was about bringing a Pakistani-American hero to the forefront. Whether or not moviegoers are ready to see a Pakistani superheroine is unclear. White male stars currently dominate the roster of silver screen superheroes. If Hollywood comic book films are going to move forward in a meaningful way, they need to pull from their diverse character roster. The potential is there, and so are the fans. We just have to wait and see where they go from here, but fan-films such as KAMALA never hurt to show studios and directors that there are people who want something different. Maybe even something better.