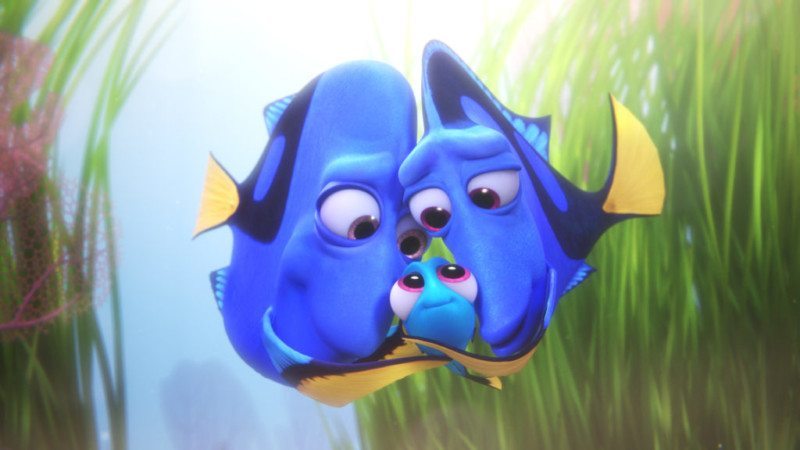 Pixar released FINDING DORY to all of the United States on June 17, 2016. Since then, it has become a huge box-office success, grossing over $400 million worldwide. The film has also received a good amount of praise from audiences and critics alike. While there are those who critique the film heavily, comparing it to FINDING NEMO, many praise it for enhancing its predecessor’s messages. Both films stress the importance of taking on challenges that others might discourage you from, and succeeding with the strengths that usually go unseen.

FINDING DORY takes place a year after the events in FINDING NEMO. At the start of the movie, Dory begins to remember her life before meeting Marlin and Nemo and, accompanied by the father son duo, travels all the way across the ocean to the Marine Life Institute at the Jewel of Morro Bay, California in search of her parents, and therefore, her sense of “self”. She gets a lot of help from new and old friends, from a “septopus” named Hank to a whale shark named Destiny. Although Dory does get lost throughout the film, the “finding” is more metaphorical. She searches for an important part of her identity that she couldn’t remember up until now and, eventually, is able to make sense of her tangled memories, and make an incredible discovery that I won’t spoil!

LOOK: Interested in more intense movies? Check out this article on James Bond!

Dory and My Family

My family and I saw FINDING DORY for Father’s Day at a theater in New York City. Initially, I didn’t expect much from the movie. I thought it was a nice family activity since my family had seen FINDING NEMO together back in 2003, and loved it. Much to my surprise, the sequel was more charming than expected! I loved how Dory’s timeline transitioned smoothly into the original Nemo storyline and the resurgence of Dory’s plucky “just keep swimming” attitude.

However, for me, the most significant part of the story lies in Dory’s flashbacks. During critical moments, she ends up remembering parts of her childhood that help her continue on her journey. A lot of these scenes show how her parents helped her practice methods that could make up for her greatest weakness–short term “remembery” loss. I was happy to see a movie focused on a character with a mental disability, mostly because my little brother is on the autism spectrum. The film hit home, not in a tears-and-feels way, but in a familiar way, since my parents coaching my brother was a daily aspect of our lives.

I’ve seen my mom work with my brother a lot like Dory’s parents did with her. Like Dory’s parents, she would help turn my brothers interests into strengths. In the film, baby Dory has a strong affinity for shells. Her parents create a path of shells leading to their house, so that if Dory ever wanders too far, she will come back even if she forgets what she’s doing. My brother, for example, likes to keep a routine schedule, but feels incredibly disoriented if it’s disrupted. My mom helps him structure that schedule in a way that helps him slowly learn to be more flexible in the future.

READ: Remember the importance of queer spaces in the aftermath of Orlando

Unfortunately, Dory doesn’t even have the luxury of growing up with constant help. She gets lost as a child, and ever since then, deals with not knowing what has happened or where she is. However, this helps drive home the movie’s main theme. FINDING DORY is all about disabled characters using their strengths to the fullest.

Dory’s strongest assets are her social skills. She’s polite, straightforward, and friendly, which almost always compels one or two fish to help her out. She’s a very positive fish who faces all obstacles with a steadfast determination—even when she’s not entirely sure what she’s doing or why. She doesn’t get discouraged until Marlin, truly aggravated with the way her memory loss combined with her excitable nature, lashes out at her. Even then, she continues to try and be helpful to make up for her mistakes. Towards the end of the movie, she  learns to deduce what she was doing based on her circumstances. In short, Dory has a full range of strengths that more than make up for her disability, and her determination eventually leads to her regaining some of her memories!

There is no shortage of disabled supporting cast, either, in FINDING DORY. Besides Nemo, who makes a background appearance in this movie, still sporting his “lucky fin”, we meet a visually impaired whale shark, named Destiny, who is Dory’s loyal friend, and Bailey, a beluga whale whose echolocation is “broken”. Both Destiny and Bailey are confined to the marine life aquarium because of their physical problems. Destiny constantly bumps into walls, hurting herself, which frustrates her greatly. On the other hand, Bailey can’t use his echolocation because he still believes his previous head injury is affecting him. Destiny’s situation can be easily recognized. Anyone with a permanent physical restraint, like partial blindness, can probably relate to the fears that come with the disability. Bailey’s situation can be seen as more internal, or interpreted as anxiety.

Again, with these characters, we see them blow past their shortcomings. After some instruction and encouragement from Destiny, Bailey figures out how to use his echolocation to help Dory navigate through the aquarium pipes. In turn, Bailey acts as Destiny’s eyes during a critical part in the film. The two characters help build each other up and overcome their individual challenges. We consistently see Pixar championing the accomplishments of these disabled characters, and emphasizing that it comes from their cultivated abilities.

Pixar highlights the invisible strengths that the average person, and even the parents of disabled children, might not be able to see. If you’re a cynic, perhaps this movie isn’t for you, however, even though this story is fictional (if the talking fish didn’t already give that away), the problems the characters face are real. This film can reassure parents and children alike that having a disability, although frustrating, isn’t always discouraging. With time and patience, it is possible to develop your child’s strengths enough so that they can function independently.*

According to the Centers for Disease Control and Prevention, 1 in 7 children (aged 2-8) has a mental, behavioral, or developmental disorder in the United States alone. That means that approximately 3 million mentally disabled kids and their families can benefit from a movie such as FINDING DORY. Not only can it encourage children with disabilities to challenge themselves, but also it provides a great example of patient parenting for adults. This film also brings to light the difficulties many people face that aren’t always readily visible. Able families can broaden their outlook on life, which helps create a more aware and supportive community for everyone.

* (I would like to make it explicitly clear that I understand it is not possible for many disabled children and adults to be completely independent. I still believe FINDING DORY is a testament to the greater strengths of those who are disabled, even to the point of dependency. It is very easy to underestimate those who behave differently, but from what I know of my brother, and of friends, they are capable of more than most would expect. Of course, that does not mean it is permissible to treat them insensitively, as if they are able.)