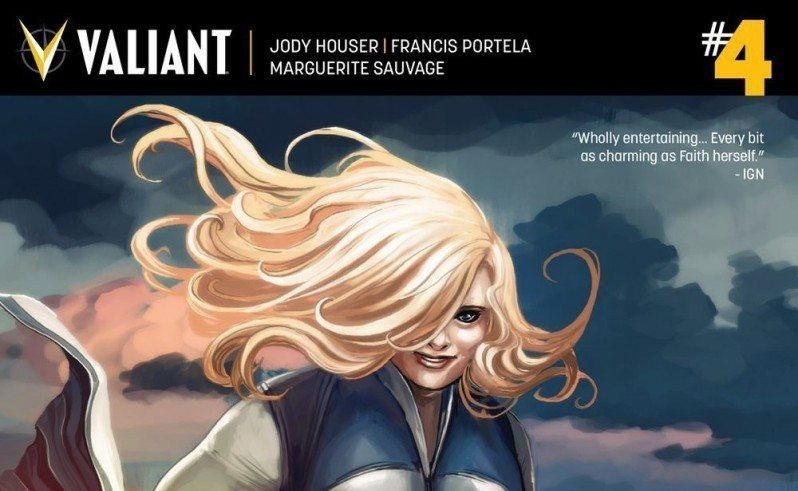 The concept of heavily sexualized women has never been a stranger to the comic book world. Regardless of how far we’ve come as a society in establishing a better sense of equality among the sexes, the concept still persists throughout all forms of media. Sure, it can be argued that men, too, are becoming more openly sexualized—in both heterosexual and homosexual contexts—but that doesn’t change the fact that many of the female characters we know and love still don’t wear any clothes (or underwear, in some cases.)

Feminism doesn’t require me to tear down all my favorite characters’ being half naked. Hell, Psylocke and Emma Frost can continue to flaunt their taut muscular bodies under nylon and rubber, for all I care. Feminism is accepting that female characters of all kinds can exist, from the sexual confidence of Emma Frost to the deification of Jean Grey as the Dark Phoenix.

WATCH: If you missed NYCC 2015, watch this interview with Erica Schultz to hold you over!

Where it gets tricky is in the portrayal of these characters that have existed through a historical progression that has only gotten better for women, if infinitesimally. While there will always be problematic portrayals of characters we’ve come to know and love—with some more susceptible than others—writers and artists alike struggle to present new representations of the same characters without creating completely new characters altogether.

Does this mean that all Hell should break loose and all the women that have ever been sexualized in comics should continue to be? Of course not. Does it then mean that every female hero or villain we’ve ever known should now be portrayed as covered head to toe in black linen? Please, God, no. What it does mean, is that comic books, and stories overall, need new portrayals of women. FAITH does just that and so much more. 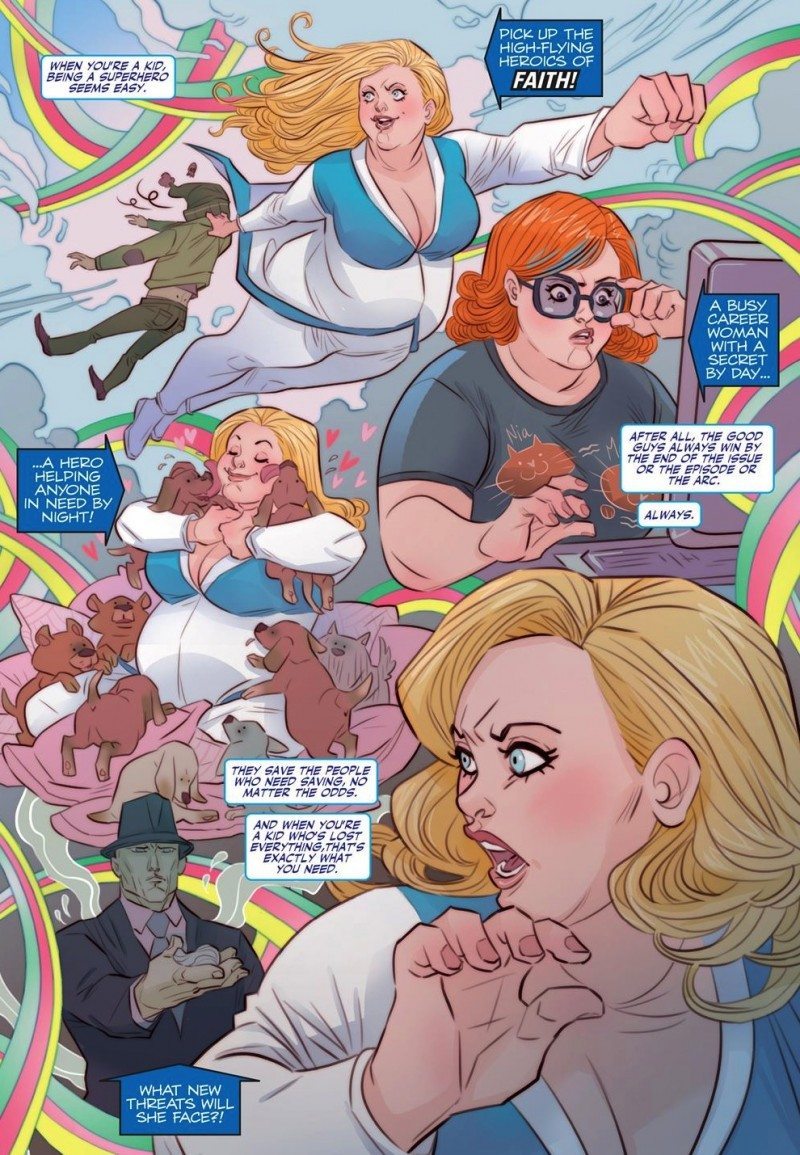 Faith Herbert, also known as Zephyr, was originally part of the Harbingers, a group of unique, psionic teens. When we meet her for her solo title, she has distanced herself from painful memories in attempts to start anew in Los Angeles. As most of us comic book readers know, superheroes can never seem to catch a break.

While Faith’s story is not necessarily a wholly original one, her characterization is. Very rarely have I been able to read a story that is classified as a “superhero story” and still feel that I could relate so easily with the main character. Sure, any empathetic person can feel a deep emotional bond with X-23’s ambivalent feelings of isolation and duty, but no one can say they were built in a lab to be a master assassin. While we can make similar claims with FAITH in saying that none of us can relate to having psionic powers or the ability to fly, her character becomes so much more than just her abilities.

READ: Need a review of the first issue of FAITH? No problem! Check it out here!

It’s extremely easy to make one’s superpowers inform, reflect, or even replace a character’s tragic flaw. I’m pleased to say that for Faith’s characterization, this is not so. In fact, Faith stands out as a character so strongly on her own that any doubts or qualms she has in relation to being Zephyr have always been in response to her powers, not because of them. In essence, Faith could have been classified as a strong character with or without her powers. Her abilities and her superhero persona are just another piece to the vast puzzle of her overall characterization. In fact, Faith appears to be one of the better-adjusted superheroes in existence. While she has similar insecurities and concerns in being able to maintain a civilian lifestyle or protect the ones she loves, she’s also a fully developed character with hobbies, preferences, and opinions. You know, like a personality.

READ: We have a new Culture section! Let’s talk politics and opinions!

Jody Houser writes Faith with a believable and likable voice. She’s funny, she’s self-aware, and, most importantly, she’s relatable. Her pop culture references feel organic to her character instead of being a cheap trick for laughs or relevance. On top of that, the self-awareness in her internal monologues reflects very real feelings and reflections, like how cheesy and stereotypical superhero puns can be. Not just that, but all of these aspects make sense with her character because—wait for it—she’s a fellow fangirl. Mentions of Joss Whedon, sci-fi fandoms, and joining RPGs? This is my kind of gal!

To be fair, the likes of famous comic book women like Jean Grey or Rogue may set impossible body standards while still having some very real and relatable characterizations. No one’s arguing that. But the relationship between an unattainable physical portrayal and a sincere emotional bond between reader and character can create a strange dissonance. The aforementioned characters become deified, symbols of what one should strive to be. Faith is a superhero that functions very differently. In the way she’s portrayed by Houser, it actually feels possible for you to not only meet her, but befriend her.

In a world that is so vehemently clinging on to male-centric ideas of female beauty, Faith not only achieves a strong, relatable female identity that I’d say most women and girls could get behind, but she is also a well-formed, three-dimensional character. Before one can identify what “kind of woman” she is, Faith is most importantly a caring superhero and a great friend. 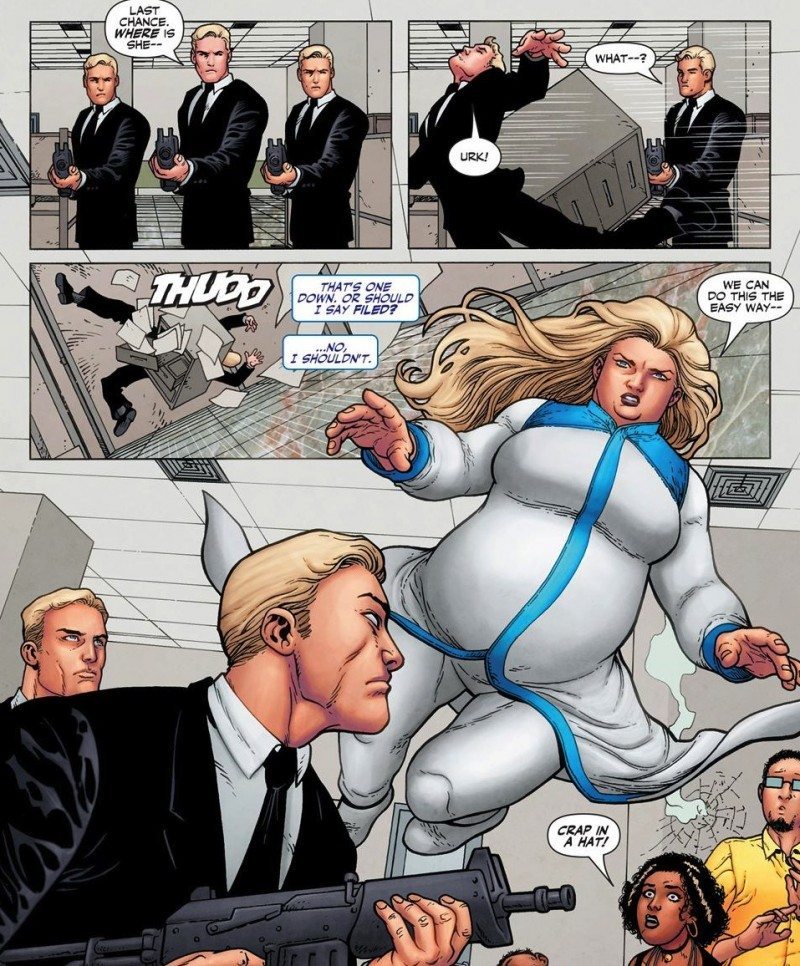 Due to the hype surrounding FAITH’s launch, the series could have easily capitalized on preaching, “Oh, big women are so beautiful, too, let’s give them a chance, huh?” Thankfully, Houser, Francis Porteza, and Marguerite Sauvage do a beautiful job of letting Faith speak for herself. In that, I mean that there are no pointed digs about her appearance in any way. Faith was allowed to live and exist as Faith. Looking past just appearances, the reader remembers that she’s not only a fun-loving nerd but also friendly, sensitive, and flirtatious. At risk of using a wholly overused word, she’s normal. Even in the Valiant universe, she fangirls and gushes about sci-fi TV shows that she loves, even when those same TV shows have the perfectly sculpted, thin and/or muscular men and women.

Not only is Faith’s characterization most organically reflective of a strong, independent woman, but she also lives in a world that portrays the same culturally constructed ideas of ideal body types. What these conscious or subconscious artistic and storytelling choices say to me is that, in the Valiant Universe, nobody cares. Faith’s appearance doesn’t define her, nor do other people’s views of her. The only dig that’s ever directed at Faith in any way is when the stereotypical model girlfriend of her ex-boyfriend, Torque, suggests to him that he had upgraded. Rude, but even that doesn’t have to be seen as a body-type-specific dig.

LISTEN: In the mood for X-Men? Check out what we have to say about Age of Apocalypse!

Many superhero groups of the past have tried and succeeded in their portrayal of the underdogs persevering or finding community among like-minded people against all odds. I’m sure the shameless X-Men name drops were not missed. That being said, FAITH functions on multiple levels. One is that it shows a young woman trying to make it as an adult in Los Angeles as a content writer, while also simply wanting to do the right thing as a superhero. Another is that Faith questions and doubts her own choices, both in life and in crime-fighting, making her a very human character and likable superhero that’s not hidden in a shroud of idealism or deification in appearance or personality.

Finally, because Faith tries to be her best self and accepts all of life’s challenges—both civilian and superheroic—readers take away a very real life lesson: Sometimes it’s the sum of the small aspects of life and self that make everything worthwhile. Change is inevitable and it can come in waves or increments. FAITH shows increments isn’t such a bad thing. Both in one’s life, as well as on a greater cultural scale, I believe this is a lesson of immeasurable importance.